Scenes From the Basque Culinary Summit at Stone Barns

Share All sharing options for: Scenes From the Basque Culinary Summit at Stone Barns

On Monday, some of the world's most influential chefs, farmers, food scientists and activists gathered at Blue Hill at Stone Barns for the annual Basque Culinary Center summit meeting. The center's advisory council — an international band of culinary greats like Ferran Adria, Michel Bras and Blue Hill's own Dan Barber — had organized this year's conference around the subject of plant breeding, and the cultural and ecological importance of maintaining diversity. The summit was a day-long series of lectures and discussions from a mix of chefs and plant breeders. Among the New York chefs in attendance were April Bloomfield, Dan Kluger, Michael White, and Matthew Lightner just to name a few, plus non-chef icons like Ruth Reichl and Harold McGee. Here are a few highlights: 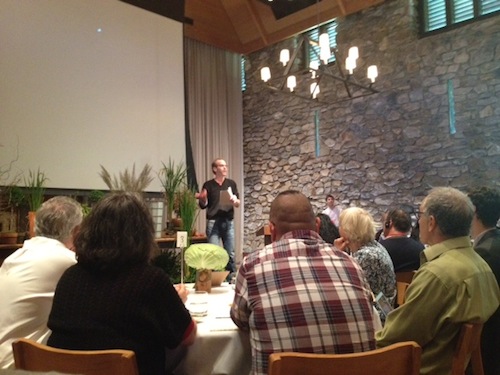 [Dan Barber addresses the crowd]
· In the morning one seed grower and one scientist presented on breeding new, better varieties of vegetable (using good old-fashioned reproduction, not genetic modification). For the former, this involves inspecting 200 lettuce plants by hand and picking just two or three to keep each season.
· Brazilian chef Alex Atala brought out some crazy Amazonian products that he's been working to popularize, like vanilla beans nearly the size of a banana, and a newly developed "mini rice" with grains the size of quinoa (Danny Bowien was eager to get his hands on that one).
· Chef Sean Brock of Husk in Nashville spoke with the owner of Anson Mills on his work preserving the ingredients and traditions of the Carolina Rice Kitchen, and on the revelation of eating real grits.
· Non-commodity wheat breeder Steve Jones demonstrated how wheat flour doesn't have to be white. It can also be red or yellow or blue, and come with about as many different flavor nuances as a glass of wine. 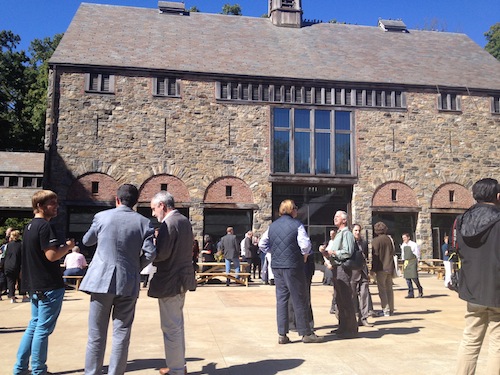 [During a break. That's Michael White in the center]
The day ended with discussion among the tables, where it became clear that many of the chefs, as April Bloomfield put it, "didn't even know there was a breeder." For some it was a revelation to learn that vegetables could be made better. Michael White commented: "We compromise as chefs all the time. To know that we're compromising on vegetables too was so disheartening." But plant breeding presents the possibility of getting better vegetables in terms of taste, size, and even shape. If there was any conclusion to the day, it was that now the challenge will be for the chefs to actually build the relationships with those breeders that will help them compromise less.
· All Coverage of the Basque Culinary Center [~EN~]