Share All sharing options for: The Early Word on Chris Cipollone's Piora

At the end of the summer, former Tenpenny chef Chris Cipollone opened Piora, a West Village restaurant with an eclectic menu that includes Italian and Korean-inspired dishes. Right now, the restaurant has a perfect five-star rating on Yelp, and a handful of bloggers and message board users have also filed glowing reports. Here's a look at what early diners are saying about Piora right now:

The Good News: One Mouthfuls contributor is pleased with the food and the service, but has a couple of minor complaints: "The space is very comfortable, and reminds me of a slightly cleaner-looking Musket Room....The tables are slightly too high for the banquet seating. Food is served on ubiquitous large white plates. The vegetable plate, which had gotten special accolades from Sifton in the Tenpenny review, was very good. The octopus was very tender, maybe bordering on mushy, with great BBQ sauce, but a little heavy. The service was very good, but the kind of service I find a bit annoying in this kind of casual mid-priced restaurant but I know many others like? Prices were fair (entrees hovered around 30)." [Mouthfuls forum]

The Strong Value News: One Yelp reviewer praises the food and the personal service: "The chef brought out an interesting amuse; it was made with infused apples and something else and was tasty and refreshing. Based off of the reviews and recommendations, we started with the monkey bread. How do you not order warm, buttery, salty bread with delicious buttery spreads? It is served with whipped lardo (fancy term for pork fat) and seaweed butter. For our entree, we split the bucatini (made with squid ink and black garlic and topped with crab), the duck (absolutely divine, the breast was cooked perfectly), and the halibut (perfectly cooked as well).?Piora is clearly not a 'cheap' place, but I would offer that it is an incredible value for the quality of drinks, quality/size of portions and the incredible level of service." [Yelp]

The Very Good News: An eGullet user loves the restaurant, but thinks there's still room for improvement: "The food really blew us away; unique flavor combinations, really well executed. Everything we had was cooked perfectly, from a squid ink and black garlic pasta with crab and chilies to an ocean trout with cauliflower sausage. Vegetables are done really well, as was the sucking pig. The service needs a little bit of fine tuning, but they were very enthusiastic, friendly, and eager to please. I will certainly be eagerly returning." [eGullet Forums]


The Too Salty News: Another Yelper enjoys the experience but thinks Piora has a few kinks to work out: "?The agnolotti were neatly folded and each contained a delicious filling of pecorino cheese, and with the addition of aromatic preserved truffles and English peas, it made for a fairly satisfying main course. The flavors are perfectly balanced, allowing you to taste and appreciate each of the ingredients and elements of the dish. My only criticism of this dish is that the chef was perhaps a little too heavy-handed with the salt, as I had to reach for my glass of water several times between bites. Piora isn't perfect. As with any new restaurant, it's still in the process of settling in and figuring out a rhythm of its own." [Yelp] 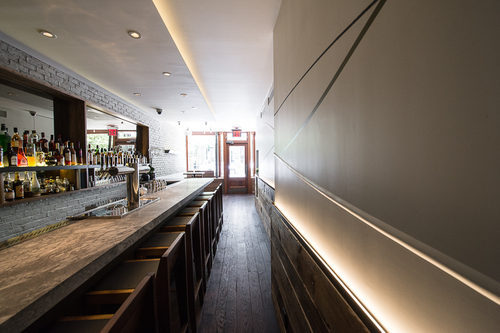 [Daniel Krieger]
The OpenTable News: Almost all of the review on OpenTable are five-star raves, but here's one user that offers some criticism: "The appetizers were fantastic as was the pasta. But the mains were just ok. Service was great. Restaurant was great, smaller space but laid out nicely with ample room per table. Everything was great except for the main dishes. I had the duck, which was a bit tough, and my friend had the halibut, which was a bit bland. It was kind of loud." [OpenTable]

The Awesome News: Another Yelp reviewer gives a big thumbs up to Piora: "I've been here twice since their opening. What a breath of fresh air! The menu is awesome! Favorites so far: octopus, poached egg, scallops, crab, and black garlic bucatini and the pork belly?I also had an amazing dessert featuring the best-tasting strawberries I've ever had. The bartenders are the next level beyond mixologists — they are scientists and have the white jackets to prove it!... I also had the pleasure of meeting the owner Simon who personally checked on our table. He was lovely and eager to share his concept! Hooray for owners that are involved!" [Yelp] 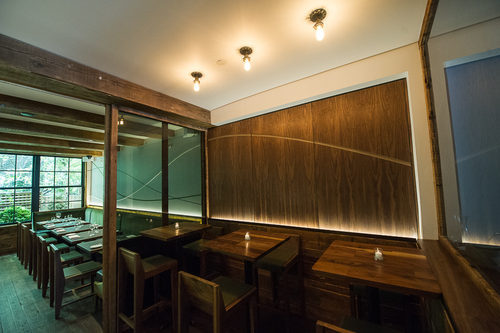 [Daniel Krieger]
The Vegetable News: Food Republic editor Matt Rodbard files an early take: "[T]he focus is wisely placed in Cipollone's home run zone: Italian, adventurous, delicious. Seared scallops are served with corn puree and sweet kernels brought to the next level with chicken fat and skin. Bucatini, ashened by black garlic, is dressed with a creamy, briny mix of Dungeness crab, chili and maitake mushrooms. More on the Korean side, a fiery barbecued octopus (jjukkumi gui) is marinated with gochujang, fired (perfectly tender) and served with basil and pine nuts candied with red pepper flakes (gochugaru). But, to be honest, all I wanted to try was Cipollone's market vegetable plate?Just like at Tenpenny, the dish is a play on colors, textures and preparations." [Food Republic]