A First Creamy Look at Davey's and 5 Oz. Factory

Share All sharing options for: A First Creamy Look at Davey's and 5 Oz. Factory

September would seem to be a bad time to launch an ice cream parlor, like opening a toy store the day after Christmas. But that's the case with two major frozen treat purveyors that have just opened south of 14th Street: Davey's Ice Cream in the East Village and 5 Oz. Factory in the West Village. Here are some first impressions. 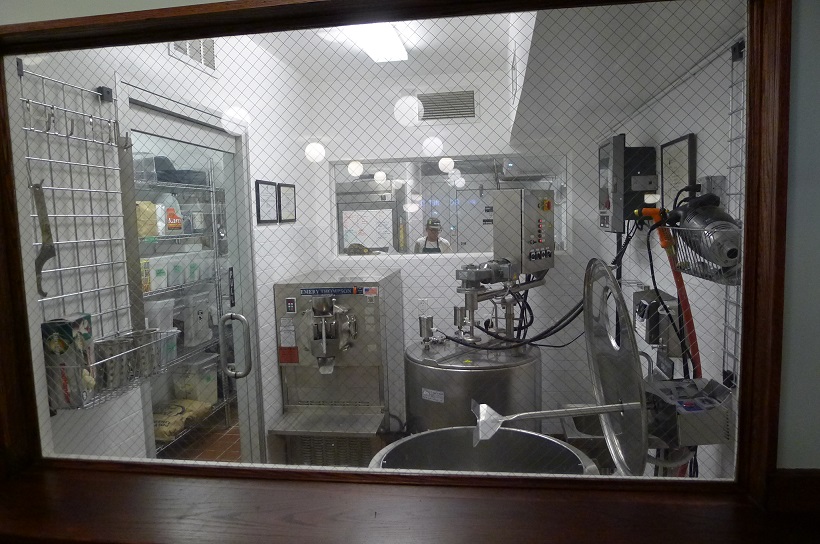 Davey's is the brainchild of Davey Yoo, a former graphic designer who decided to get into the ice cream business. His intention was to open in June, but the inevitable delays occurred. Just north of St. Mark's Place, the storefront is big and bright with only a few stools, if you want to sit while you lick. The focus of the decor is an ice cream manufacturing room visible through a window at the rear of the store. 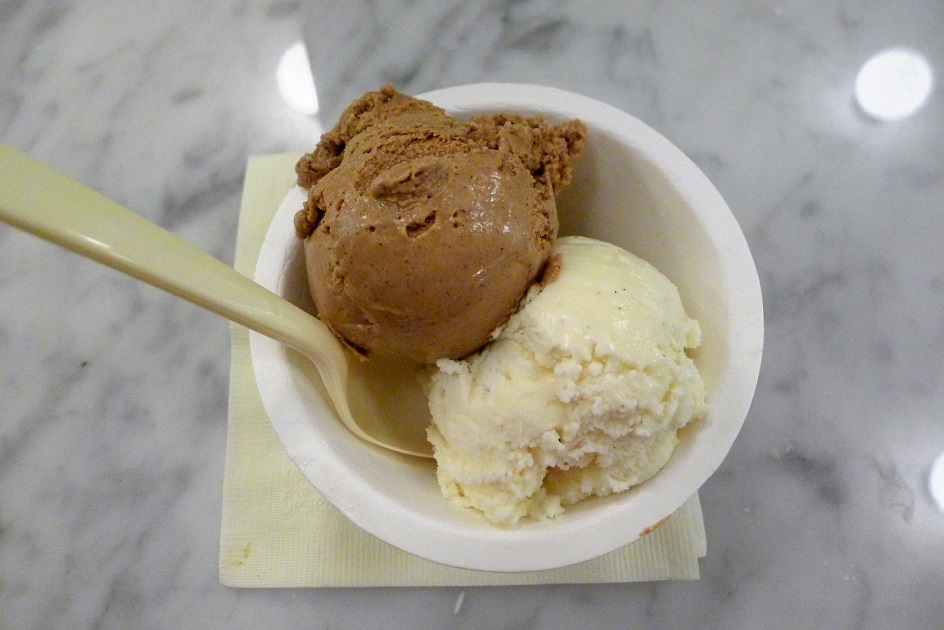 Yoo doesn't work with a commercial mix, but makes his own ice cream base from milk and cream sourced upstate. The flavors are limited in number. Last night I tried two, Mexican Vanilla Bean and Strong Coffee. The coffee flavor, made from beans toasted at Birch Coffee, was spectacular — about the best coffee ice cream I've ever tasted — and clearly effective as to its wake-up abilities, I thought as I zoomed away on my bike. The black-flecked Mexican vanilla was a bit bland, lacking in the Bourbon kick that many vanilla ice creams have as a result of using booze-containing vanilla extracts, but it had a nice aftertaste. On the negative side, it was a little crystallized. (Other flavors: toasted pistachio, corn caramel, and watermelon-black pepper sorbet). 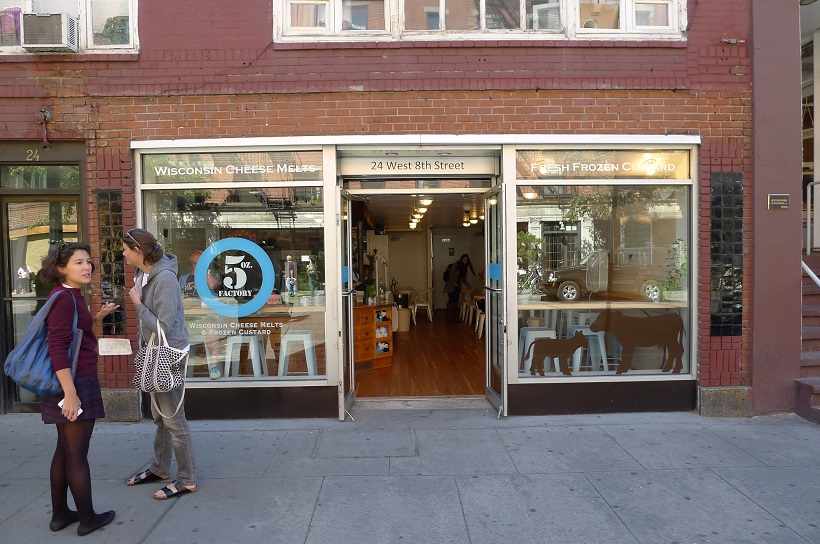 While the desire to open an ice cream shop in the East Village is perfectly understandable, the impetus to open a place specializing in frozen custard and toasted cheese sandwiches using materials sourced from Wisconsin is a bit more obscure. Enter 5 Oz. Factory, the first branch of a possible chain founded by Milwaukee native Dan Schuman. 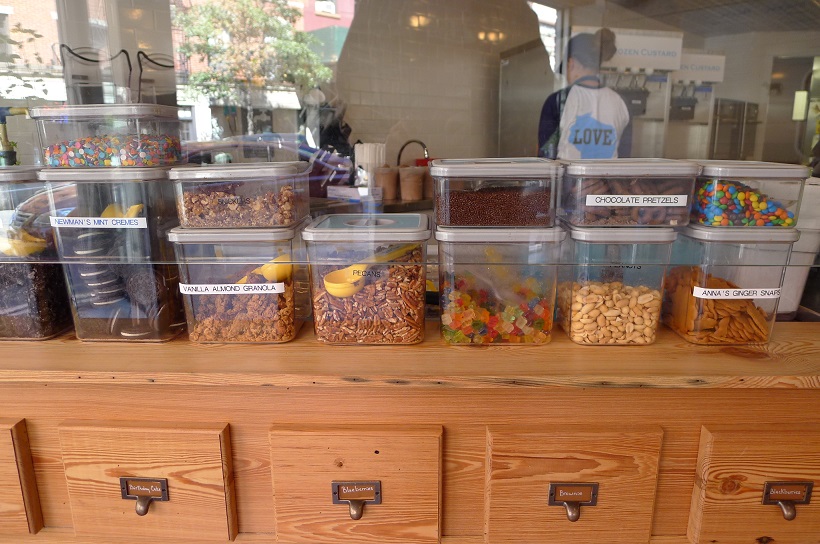 Located on West Eighth Street's burgeoning restaurant row, the interior is light and woody, and very clean-looking, but without a lot of character. It might be channeling Culver's, but without the butter burgers. I asked the countergal, "Why the name 5 Oz. Factory?" — which I didn't find particularly evocative or appealing. She replied: "That's how much ice cream there is in a small serving, and that's how much cheese we put into our sandwiches." 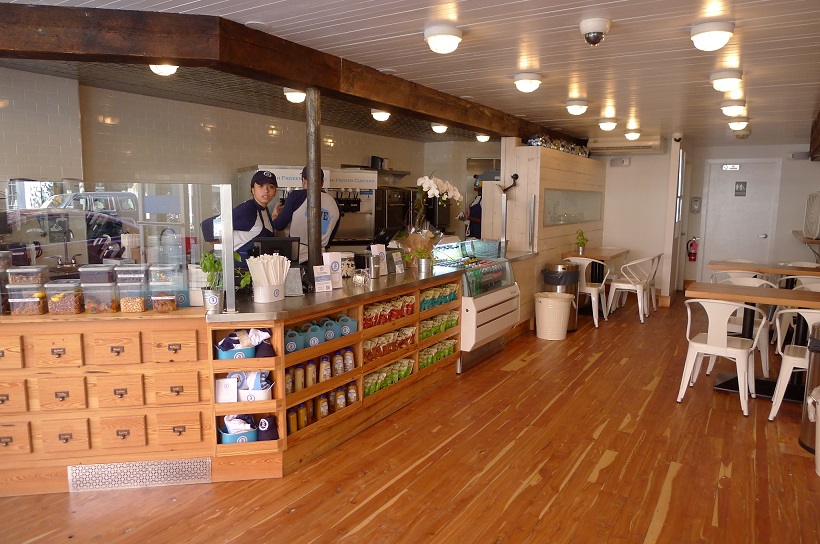 New York has had a checkered past where frozen custard is concerned. This form of soft serve ice cream is richer than, say, Dairy Queen, because it contains egg yolks in addition to the usual milk and cream. When you taste your first excellent frozen custard, such as the product at Kopp's or Leon's in Milwaukee or Gillies in Fond du Lac, Wisconsin, the richness leaves you reeling and the ice cream has a distinct yellowish tinge. Even though custard was invented in Coney Island in the 19th century, Wisconsin (where license plates read "America's Dairyland") has become its adopted home. New York had an excellent frozen custard stand in the 90s — Custard Beach — but aside from the custard line at Shake Shack, New York now has little actual frozen custard, though we have enough other frozen treats to gag a rhinoceros. 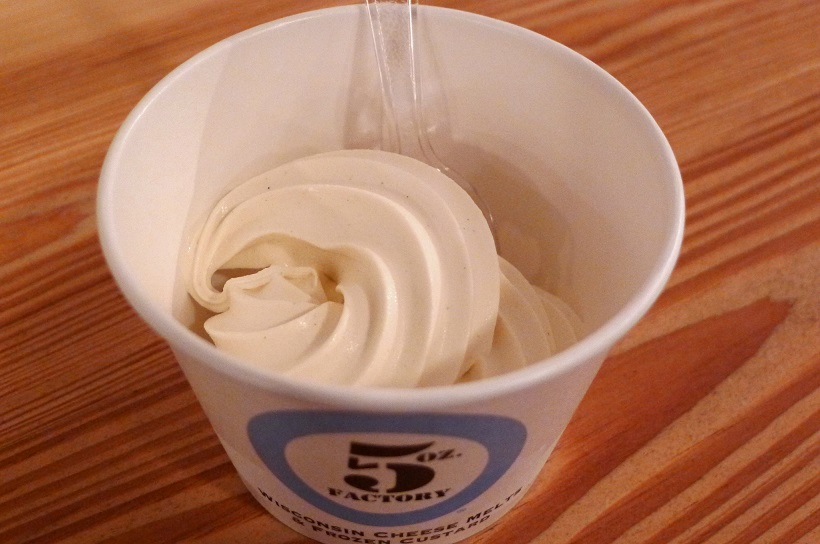 While 5 Oz. is not the best frozen custard I've ever tasted, it's pretty damn good, with a nice density, slipperiness, and ability to reflect light like a pair of lips that have just been glossed. I liked the vanilla, but liked it even better when I tried it in a friend's vanilla malted milkshake. The chocolate was excellent, as good as the gelato-on-a-stick at Pop Bar. 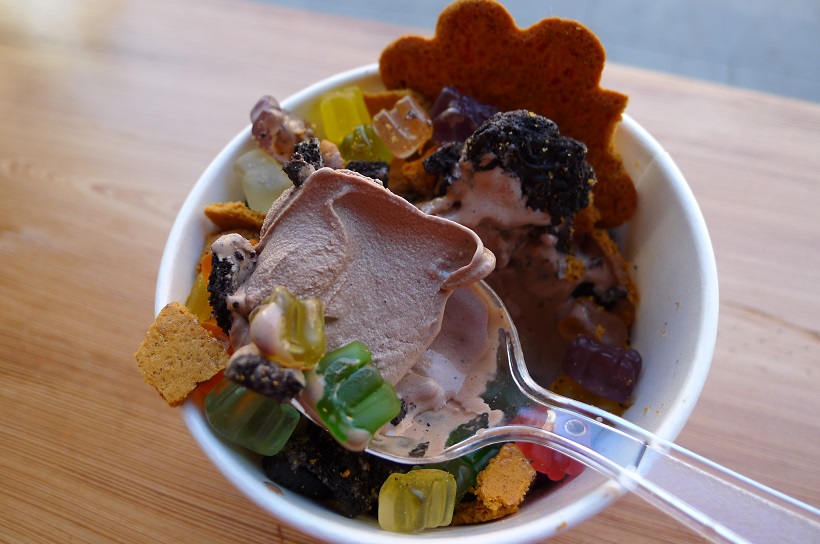 There are nearly 30 toppings you can dump on the custard (of which two more flavors are available — coffee and caramel), but if you really like frozen custard, I mean really like it, eat it without the gummy bears or fresh berries. 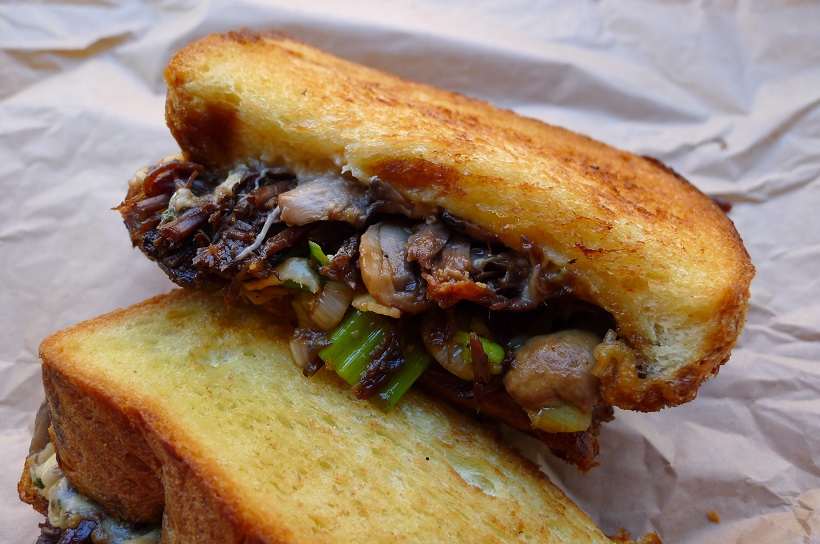 But 5 Oz. offers another specialty, and here's where the place runs off the rails. There's a menu of rather fussy and expensive toasted cheese sandwiches, some gluten free, that seem entirely over-conceived. These use Wisconsin cheeses exclusively, though why one would necessarily want to eat Swiss cheese from the Midwest rather than from Switzerland is beyond me. The sandwiches have cutesy names like Smokey and the Meatball (smoked Provolone, smoked Gouda, Mascarpone, Tomato-Basil Jack, Beef Meatballs, basil pesto), Buffalo State of Mind, Ode to Homer Simpson, and Figgy and Piggy Went to the City. I picked the most expensive, Short and Sweet: "Horseradish chive Havarti, Swiss, Roasted Mushrooms and Leeks, Sprecher's Black Bavarian Beer braised beef short ribs on home-style brioche" ($13.25). It was OK, but there was some grit in the sandwich maybe from the leeks and it was really too all over the place to be completely enjoyable. Frozen custard stands in Wisconsin usually serve hot dogs or something called a Spanish hamburger, with is really a sloppy joe of tomatoey ground beef on a bun.

As you leave the place, you wonder, "Is 5 Oz. some sort of Wisconsin dairy industry legation?"