Share All sharing options for: Triple Breaking: Cronuts Don't Sell Out Every Morning

This was the scene outside Dominique Ansel Bakery at 10 a.m. this morning. One might assume that they had already sold out of Cronuts for the day, and the frenzied masses had dispersed, but that was not the case at all: 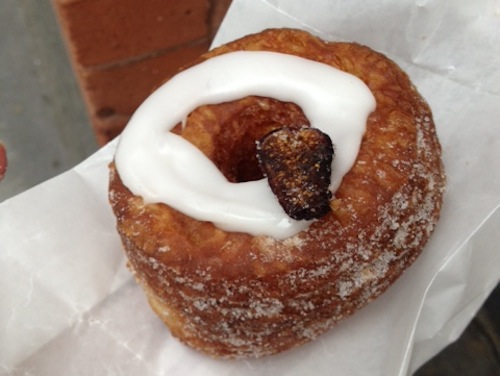 This is a Cronut purchased at 10 a.m., after waiting a total of zero minutes in line. Although the bakery did not have the Cronuts displayed on the counter with the rest of their pastries, and a sign taped to the chalkboard menu said that they were sold out, there were definitely plenty of Cronuts to be had. That sign is apparently just a permanent fixture at this point, and the cashier was happily boxing up Cronuts for anyone who asked. She said that since Labor Day, there's usually at least one day a week when the coveted pastry doesn't sell out. That day varies, but a dreary Monday morning like today makes sense.

Is Cronut mania finally waning? Clearly somewhat, and that's probably because summer vacation is over for most people. Now fewer people have time to wait in line for three hours on a weekday. But Sunday's line was still as long as ever. The bakery may have to make some adjustments to its weekday numbers.
· All Coverage of Cronuts [~ENY~]