You Be the Chef: A First Look at Potatopia

Share All sharing options for: You Be the Chef: A First Look at Potatopia

Remember when Tom Colicchio first opened Craft in 2001? The menu had a gimmick: every entrée presented a dilemma, with the diner required to pick a cooking method and sauce to go with each one. Most customers stared at their menus with a look of confusion and disbelief as they tried to play chef. The experiment in dining-room democracy soon ended, as Colicchio realized that not only were his devotees flummoxed by choices, but more important, some of them were putting things together that were truly awful, and he'd be held responsible for every serving of, say, deep-fried sardines in cranberry sauce with crème fraiche that flew from the kitchen.

I had that déjà vu feeling as I stared up at the menu board over the counter at Potatopia, momentarily panicked at having so many choices to make.

This ambitious chain focusing only on potatoes started out in Edison, New Jersey, and Sixth Avenue in the Village is the second location, with further branches planned in Miami, Princeton, and the Staten Island Mall. How's that for a random business plan? As I stood staring, a very young employee charged up to me spouting boilerplate, beginning with "Have you ever been to Potatopia before?" I felt a headache coming on. 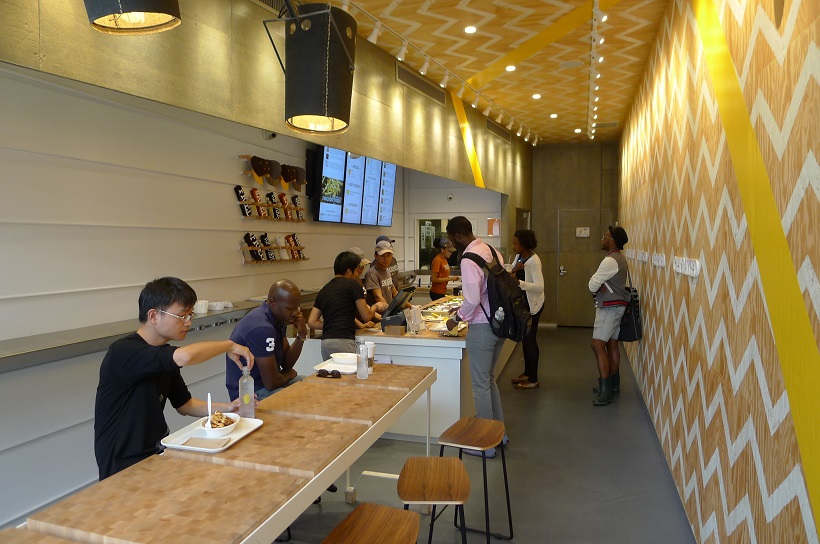 The city has seen eateries based solely on spuds before. There was a baked potato store (La Papa) run by Turks on 30th Avenue in Astoria a few years back. The idea was that you got to stuff a conventional baked Idaho potato with things like chopped pickles, corn kernels, red pepper paste, and mini hot dogs. Strange, but at least straightforward. Ten years ago there was a craze for twice-cooked Belgian fries, of which Pommes Frites on Second Avenue is one of the last remaining examples. Once again straightforward, with your choice of maybe three-dozen sauces to go on a paper cone of greasy and delicious fries. 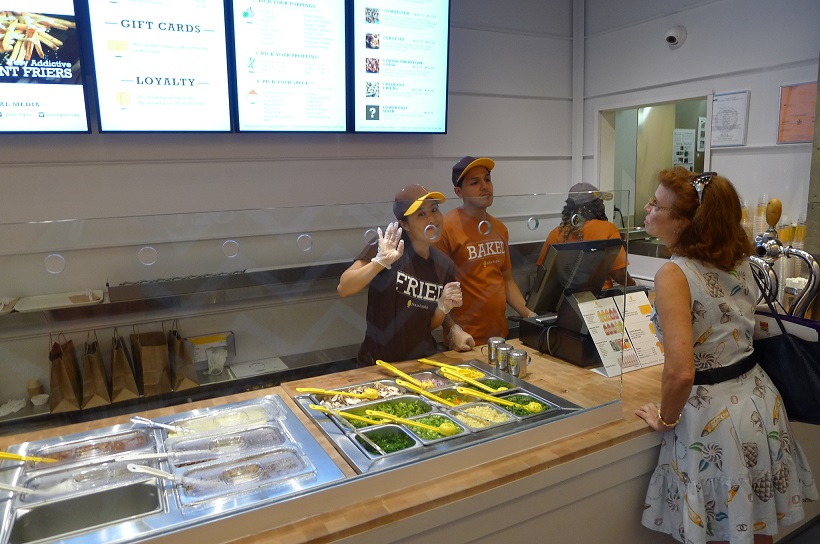 But Potatopia (Potato Utopia?) complicates matters exponentially by offering 10 different cooking methods, 21 potential toppings, and 15 sauces — if my count of substances presented along the prep counter is accurate. Sure, there are French fries and curly fries, but there are also baked potatoes and baked sweet potatoes, potatoes au gratin, mashed potato pies, potato chips, skin chips (skin-on slices cut in cross section and deep fried), smashed potatoes (refried, skin-on potato hunks), and something called sweet potato crinkle that I haven't yet figured out. Why no tater tots? Oh, and for an extra $1 to $3.50 you can also dump a "Protein" on top, running from steak to sausages to chicken to a fried egg, etc.

You pick one of the potato cooking methods, then smother it with a no-limit constellation of toppings, two out of five types of cheese, and any number of sauces. Luckily, I guess, there are "Signature Meals" — seven pre-sets priced around $4 for a smallish order that do all the work for you. On my first visit, I decided to freestyle with one order and pick a pre-set for the other. 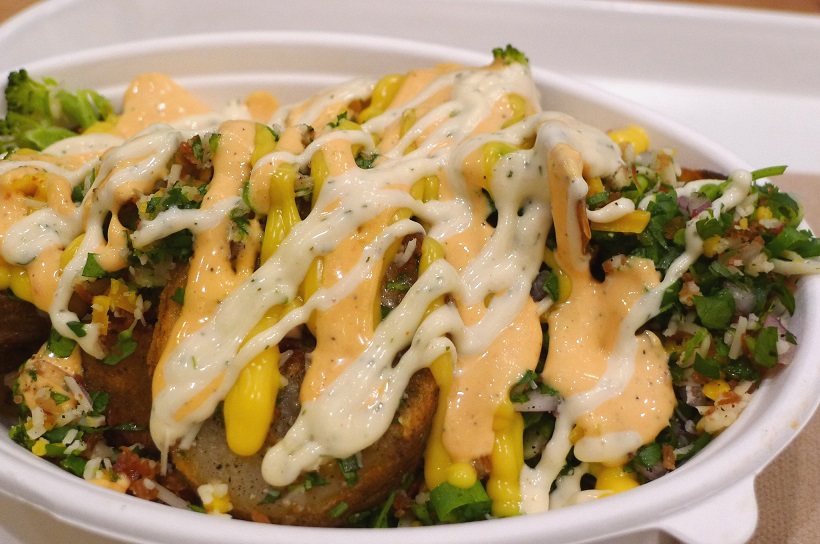 I chose the Comatoser as my already-configured potato, based solely on the name. Would it send me into a coma? In this case a handful of skin chips were engulfed in "house salt and pepper, cheddar cheese, asiago cheese, pepperjack cheese, scallion, red onion, garlic, cilantro, jalapeno, broccoli, bacon with melted cheddar, roasted red pepper aioli and ranch [dressing]." 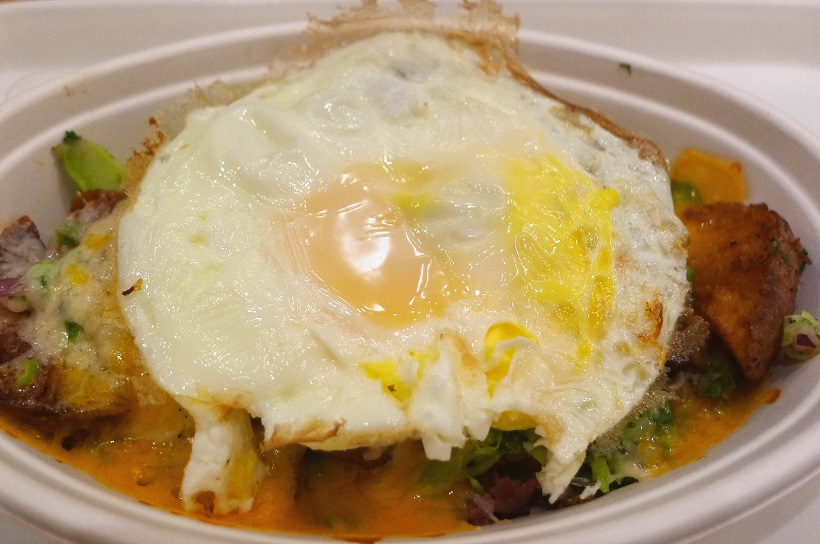 For my freestyle, I picked smashed potatoes and had an egg put on top. The smashed potatoes came mired in cheddar, and I was freed of my further ordering responsibilities, because the staff dumped a bunch of random crap from the buckets on top without asking me what I wanted, though they did accede to my request for roasted pepper aioli. It was nice to see that they, too, were entirely confused by the procedure.

So what did I think of my selections? First of all, the dry toppings are cut micro-fine, presumably so they get a bit "cooked" by the warm potato. Even the bacon is crumbled to the texture of potting soil. But these toppings tend to remain uncooked, so that the raw onions, garlic, and scallions in the Comatoser leave your mouth burning, and not in a good way. The raw parsley has become dried parsley, and everything else except the tiny broccoli florets make the welter of toppings taste dry as dust.

Most of the sauces — squirted across the top in artful squiggles — are mayo-based, which provides lubrication in the absence of actual moisture. Taken collectively, the potatoes at Potatopia constitute a sort of over-visualized junk food. And, as at the original Craft, it would be easy to slip and put something that tastes bad together — except all of the combinations end up pretty much tasting the same.

In fact the toppings add up to a randomized, desiccated, and badly flavored tabouleh. I decided I needed to pay another visit and largely dispense with the toppings, figuring that the way to enjoy this new establishment was to eat the potatoes in the simplest form possible. 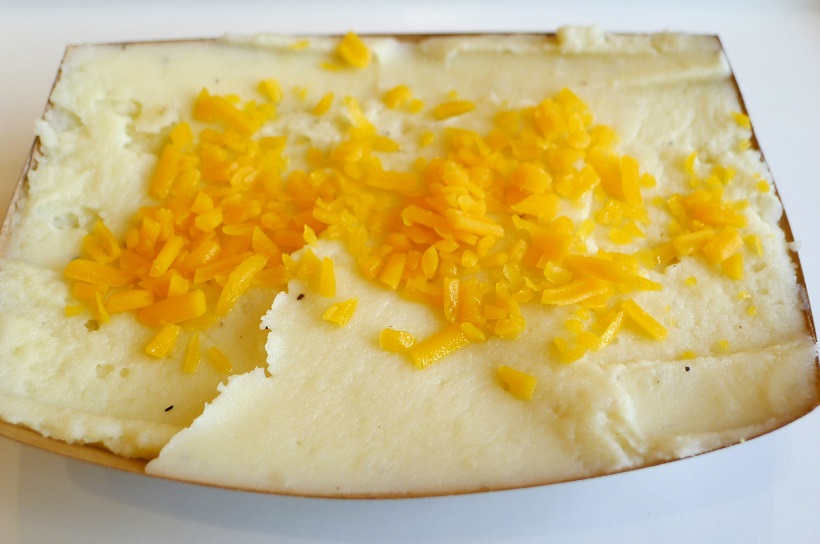 [Shepherd's pie]
I sought to recreate a shepherd's pie using mashed potatoes, steak tidbits, and cheddar. Not bad, except all the ingredients started out lukewarm and only got colder. If it could have been baked, it would have been great. 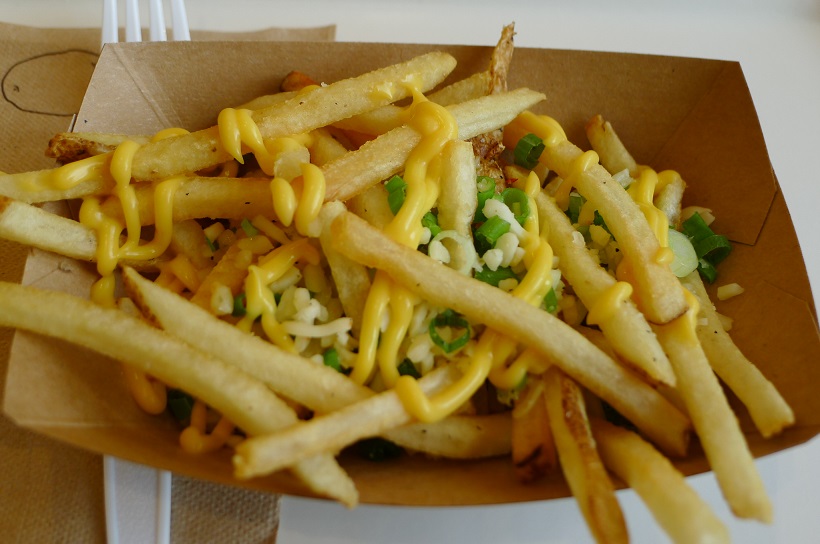 [Disco fries]
I also tried to make a version of disco fries by taking the shoestrings and covering them only in cheese sauce, crumbled pepper jack, and scallions. The French fries were good, nearly the equal of McDonald's, except the cheese refused to melt and the cheese sauce was stone cold and had none of the unguent flare of Cheez Whiz.

So, what's really the matter here? The proprietors seem intent on making things as cheap and easy for themselves as possible. Which means that gone are some of the substances you really love on potatoes — sautéed onions, melted butter, chili, sour cream, brown gravy. And what you have instead is a long counter of dry fodder that you have to use if only to expand the size of your small serving of potatoes. But still, maybe late in the evening either stoned or drunk, pick a potato and add only one or two toppings, and you'll do just fine.

· All Coverage of Potatopia [~ENY~]