Share All sharing options for: Reviews for Armani Ristorante, Luksus, Feast, and More

Pete Wells likes chef Sandro Romano's Italian fare at Armani Ristorante in Midtown: "Mr. Romano has a sensitive hand with seafood. It was on display on a long plate that held five raw tastes of the ocean, like branzino dyed purple by a bath in beet juice, and a sweet, firm langoustine with tart little bits of green apple. He mimics the look of seared sea scallops with short stacks of meltingly rich potato gratin. Shaved black truffles looked dramatic but didn't follow through with the expected flavor; all the pleasure was in the gentle interplay of the potatoes and scallops." Two stars. [NYT]

Joshua David Stein is charmed by Williamsburg newcomer Shalom Japan: "Everything on the menu that works—which isn't everything on the menu—occupies that radiant third space, the overlap of the Star of David and the rising sun...Each success is a marriage between Japanese and Jewish cuisine, a negotiation between the minimalist approach of kaiseki, the scraping away of extraneous matter to expose the essence of an ingredient, and the Jewish approach to food, characterized by a scrappy hustling of byproducts, rootlessness and schmaltz. The best example is Shalom Japan's matzo ball ramen ($16). Will I ever again drink matzo ball soup or slurp ramen without thinking of it? No, I won't." [The Observer]

Gael Greene is blown away by Sushi Nakazawa in the West Village: "The shima aji (striped jack) has a hint of ginger in its sweet soy glaze. The skipjack is warm, straw smoked and painted with Japanese mustard. It's all very classic. The shift from mustard to wasabi to sweet soy is deliberate but subtle. I find it not quite Yasuda, and nothing like Gari. If Neta is a bit like a playground with its commotion, Nakazawa is more decorous, 'Men in Black Suits.'" [Insatiable] 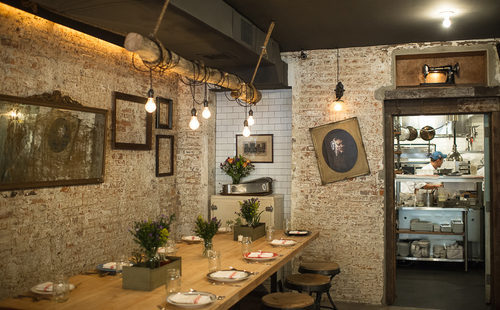 Stan Sagner gives four stars out of a possible five to Feast in the East Village: "A zucchini trio showcases the veggie in three ways: A single fried blossom perches atop tiny columns of grilled zucchini, themselves resting on translucent marinated ribbons of the summer squash. The arrangement is so fastidious that you hate to disturb it with your fork. But duty calls. Less guilt inducing is an earthy plate of toothy agnolotti alongside crisp shards of roasted chanterelle, all served under cloud of an intensely rich Parmesan foam. It borders on sensory overload." [NYDN]

Adam Platt awards three stars to Luksus in Greenpoint, and two stars to Betony in Midtown. On the former: "There are only five courses on the $75 tasting menu at Luksus, but almost all of them carry a subtle, sophisticated punch. Instead of razor clams one evening, my tasters and I enjoyed a delicate helping of chicken oysters, followed by flat pink sheets of steak tartare dressed with sliced tomato and a diaphanous, deliciously crackly substance that our waitress merrily described as an 'onion chip.'" [NYM/GS] 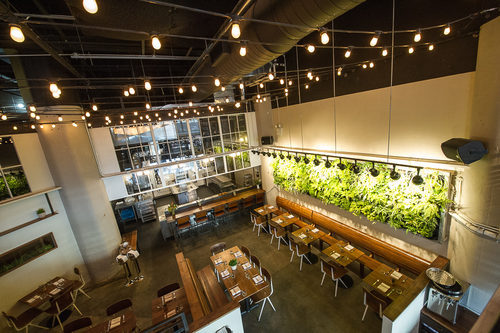 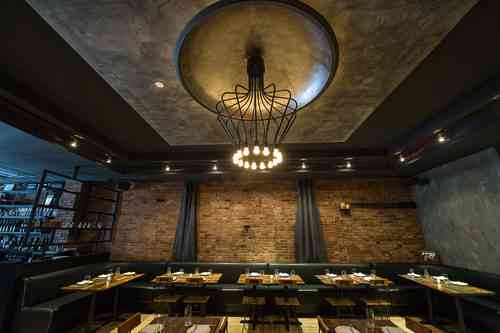 THE BLOGS: Immaculate Infatuation's Chris Stang gives a 6.4 rating to Khe-Yo in Tribeca, Gotham Gal has a great meal at Nordic newcomer Skal, The Food Doc files a recap of a late summer meal at Momofuku Ko, NYC Foodie loves the wings at Distilled in Tribeca, Eat Big Apple gives a thumbs up to MasalaWala on the Lower East Side, Chekmark Eats tries brunch at The Meatball Shop, and NY Journal samples the brontosaurus rib at Mighty Quinn's in the East Village.
· All Coverage of Reviews [~ENY~]
[Top Photo: Armani Ristorante by Horine]