As a fried chicken fanatic I was certainly interested in checking out newcomer Blue Ribbon Fried Chicken, but since it was the umpteenth iteration of a restaurant empire, I worried that the place would seem like the stepchild of forgetful parents. Of course, I hadn't factored in the Shake Shack Effect, whereby every ambitious restaurateur hopes to cast off all the sporadically-profitable restaurants in his portfolio in favor of a quasi-downmarket Next Big Thing that can be endlessly franchised — perhaps eventually on other planets.

BRFC was supposed to open on Monday, but the debut was delayed. As I was biking westward on First Street yesterday, I spotted the façade for the first time. It was impressive, but wait! Was that a line snaking from the door on First Street toward Second Avenue? Yes it was, though no customers had yet gotten inside, where a frenetic scene was taking place, some employees standing by empty chicken tubs, others running around arranging furniture and condiments. 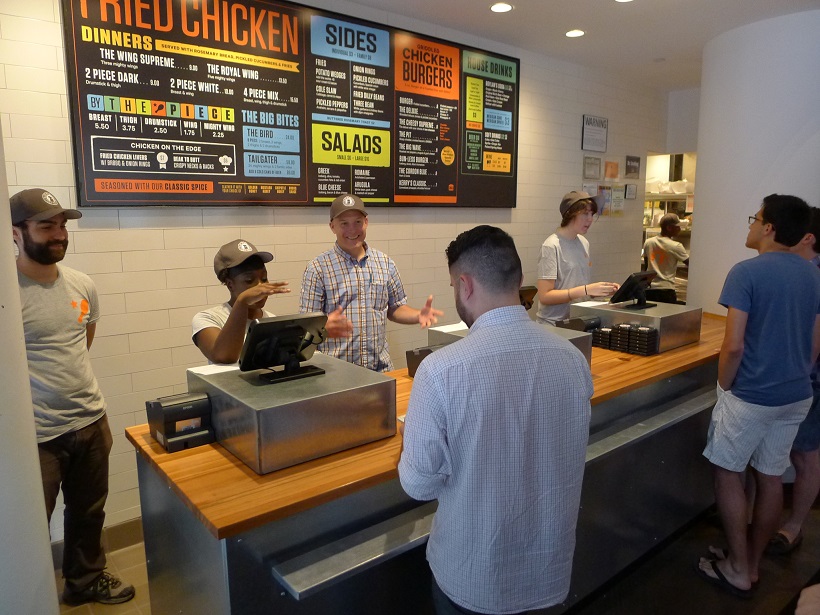 Caught up in the excitement of the moment, I locked my bike and joined the queue as Customer #14. At precisely 12:24 p.m. the doors swung open and the crowd began filing through the threshold in an orderly fashion. Directly to my left, two of three cashier stations were staffed, with one of the Bromberg brothers – the younger Bruce, I think – presiding over the scene, working out the kinks in a fledgling but seemingly efficient order system. Mounted behind the registers was a colorful menu board divided into sections that included individual pieces of chicken, chicken combos, sides, salads, chicken burgers, and drinks. 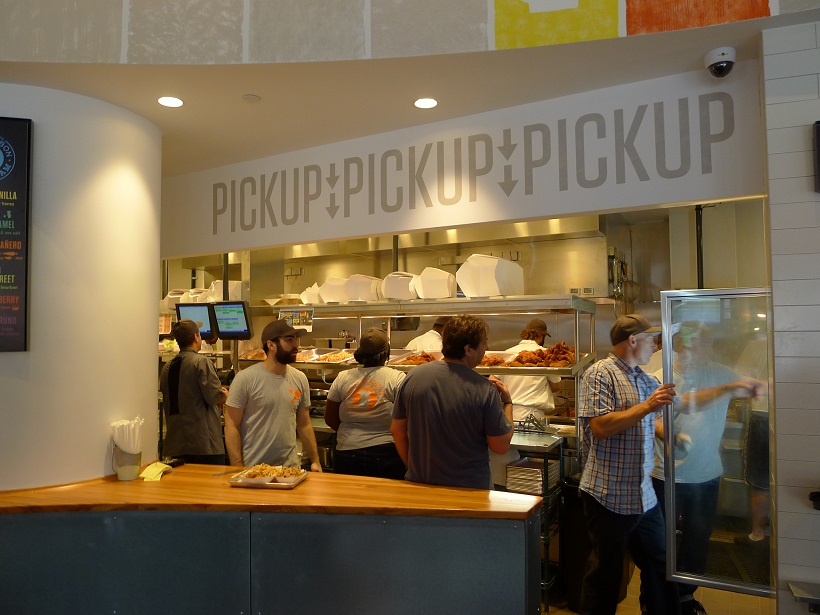 A couple of relatively remarkable things about the menu struck me: The mostly conventional combos included one featuring chicken livers, and another that fulfilled a nose-to-tail promise by offering necks and backs, lasciviously called "Beak to Butt." Avid gnawers, take note. The salad section also seemed unique to a chicken joint, with four tossed salads that seemed more like what you might find in a bistro. The iceberg with blue cheese dressing was a white trash classic; there was also a standard Greek salad.

The sides were more profuse than you might expect, including fries, onion rings, three-bean salad, fried "dilly" green beans, and potato wedges that could be customized with sour cream and bacon, for extra cash. The long list of chicken burgers didn't whet my appetite in the least, and the order as it formed in my head was already too calorific to permit exploration of the beverages. 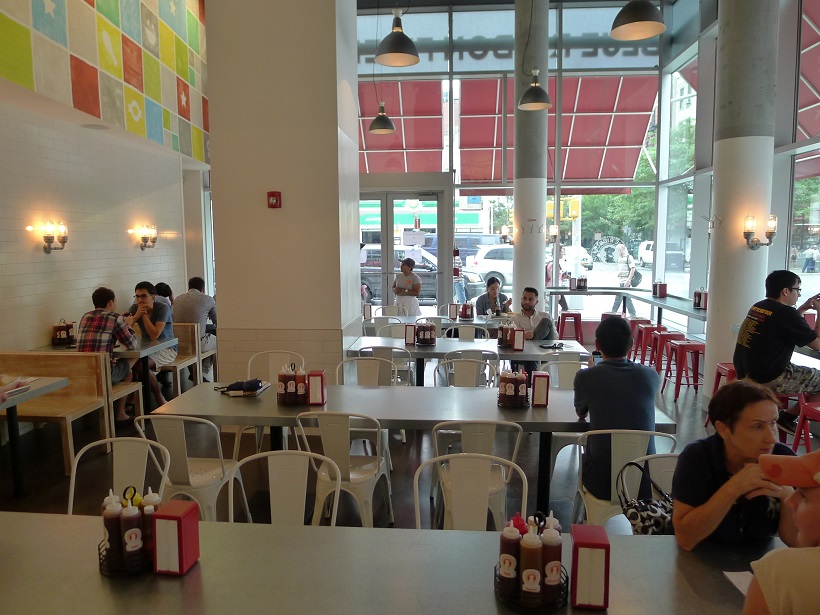 I placed my order, only to discover that the food was being given away for free on this first day, ostensibly to apologize for the late opening, and to thank the enthusiastic supporters who'd been prepared to wait in line at a place that hadn't even quite opened yet. My jaw dropped, and I quickly tried to figure out what the ethical implications of accepting free food, even though remaining anonymous, were on this occasion.

Grabbing the red-pulsating device handed to me (the same one Danny Meyer uses at Shake Shack), I sauntered over to the chicken racks, which were fully loaded, with more wings, breasts, legs, and thighs being turned out at every moment through a fully visible prep line. One guy did nothing but flour the bird parts. As a last step, a big dude was heavily sprinkling each finished piece with a finely powdered red spice mixture. My thingee buzzed and blinked and my order was ready about 10 minutes after it had been placed. 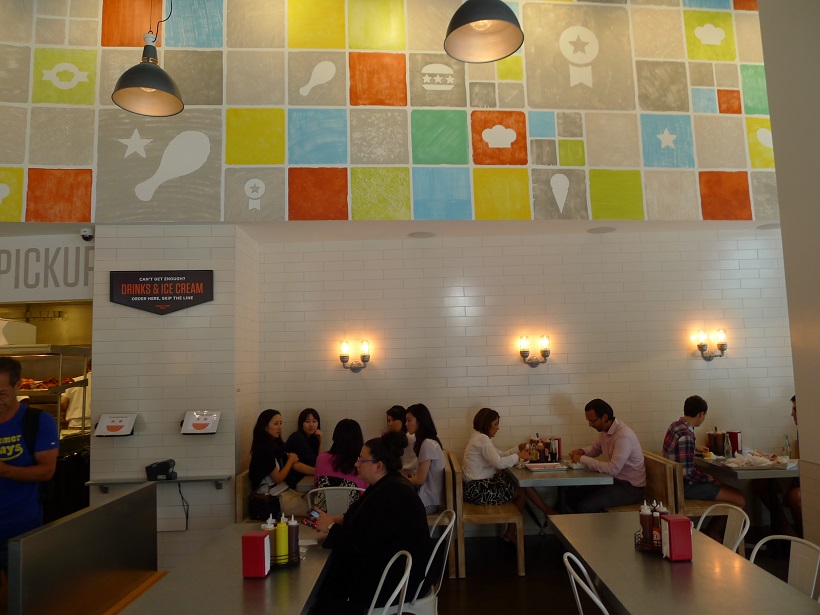 I should mention that the room is high-ceilinged and bright, with plenty of seating at tables and at a counter that runs along the windows on two sides of the restaurant. The traffic jam on Second Avenue is gloriously visible.

What did I get? A drumstick and a thigh, first of all. The pieces were not particularly large, but they were hot and juicy, with a relatively thick crust on an intact skin. The spice powder on the crust could be seen. The taste of the chicken was fresh and mellow, but almost utterly salt-less. The spice coating, which was midway between Lawry's Seasoning Salt and Mrs. Dash, was also very low on sodium. Leading me to speculate that either the chicken is aimed at those with hypertension (high blood pressure), or the Bromberg Brothers realize that building a healthy coefficient into their operation will pay off handsomely in the future. Or maybe they just want us to live longer. 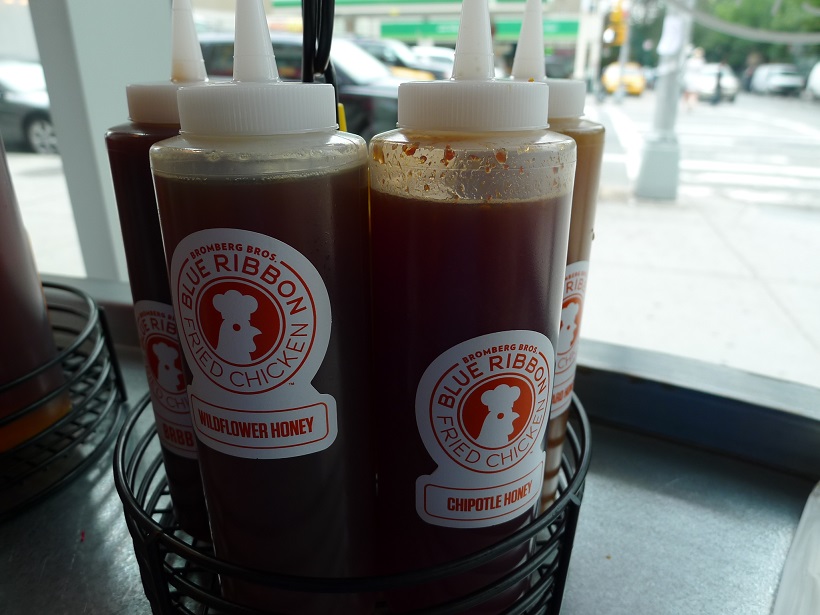 I should have gotten the fries, which are imperially thin, nicely browned, and heaped up in abundance as I saw them fly by on someone else's tray. Instead, I went for the onion rings, which are not rings but heavily breaded strips with a lot more crunch than you expect from an onion ring. They seemed like they needed some sauce, and right before me was a caddy filled with all sorts of honey-based condiments in plastic squeeze bottles. I zapped on the chipotle honey and found it sweet but a little too mild, then shook on some house habanero sauce, which was similarly mild. Clearly, the Brombergs are not spiciness fanatics. Still, they are to be congratulated for offering so many interesting choices.

I'd also ordered a side described as pickled peppers, which featured Anaheim, serrano, and jalapeno. They were sweet-pickled, but remained viable, heatwise. The final part of my order was the Romaine salad, which was a Caesar with plenty of grated cheese, with artichoke hearts as an additional fillip. There were croutons, too, as is conventional in a Caesar (which was invented in Mexico, btw). 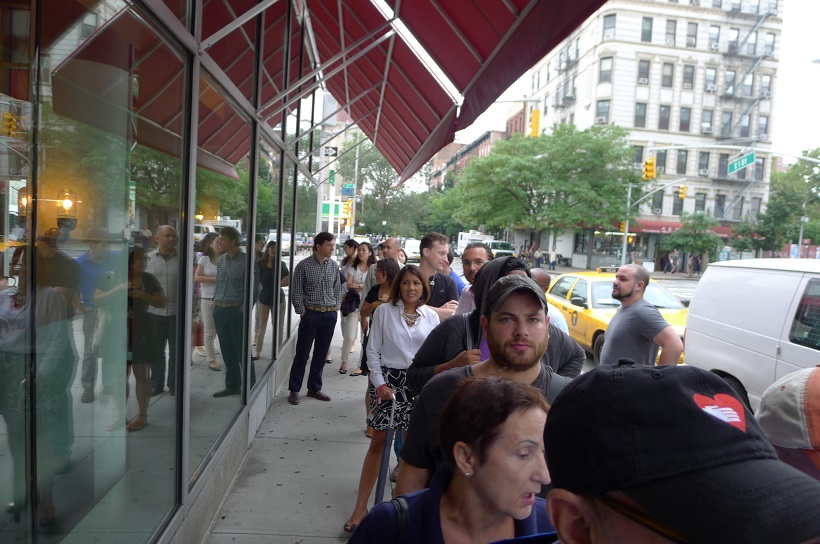 The room was beginning to fill up, everyone in a jolly mood at having gotten free food. Presumably, they were texting their friends, because the line which had dwindled when I first ordered was growing by leaps and bounds, snaking around onto First Avenue. Free food and an unpredictable opening seem like the perfect way to develop Cronut-style lines.