After a record-breaking line last week, it's clear that Cronut fever is far from over. It's time, therefore, for another roundup of news from the Cronut-verse. Here are some recent highlights from the doughnut-croissant mania that continues unabated:

· The Cronut line has its own Foursquare page, so all those intrepid pilgrims who have been camping out since 6 a.m. can check in to prove it. A tip from Ben M.: "Arrived at 6:30 a.m. and didn't get my Cronut until 10:50 a.m. That is over 4 hours in line if that puts it in perspective. But you've already checked in so you'll wait - right?"

· Plenty of bakeries and restaurants around the world have gotten away with making Cronut knockoffs without any legal repercussions, giving them names like "doughssants" or "New York Pie Donuts" to avoid trademark infringement. But now it looks like the Cronut King is cracking down. Just this week, Dominique Ansel's legal team forced DK's Donuts & Bakery in Santa Monica to change the name of their knockoff, the DKronut. Now it's called the DK Double Decker O-Nut. 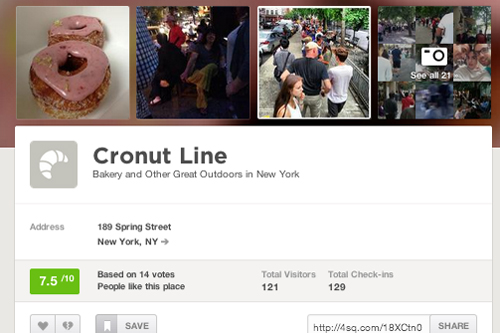 [A screengrab of the Cronut Line Foursquare page]

· Rather late to the scene, the Bay Area just got its very first Cronut knockoff. Posh Bakery's "cronot" comes in glazed, chocolate, strawberry, or cinnamon sugar flavors, and unlike the Cronut, it is available either filled or unfilled. It remains to be seen how that name will fare against the Ansel legal team.

· Meanwhile, one Southern California bakery has moved on to making Cronut (er, rather, "Cr-Oh!-Nut") holes. A steal at 30 cents apiece.

· The folks at Kitchensurfing asked Jessica Yang, who formerly worked as a pastry chef at Per Se, to create her own "bootleg Cronut." They have full instructions and step-by-step photos of the resulting "Cronut hack," which even earned the approval of the Cronut King himself. 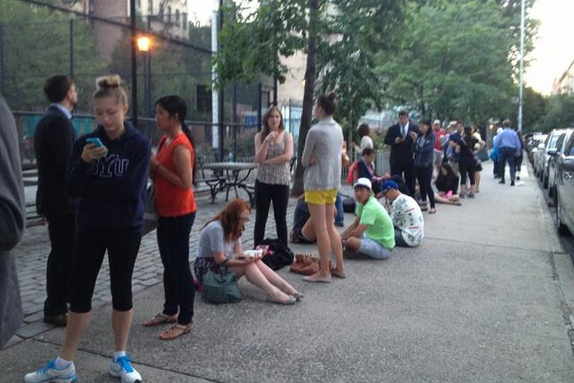 · One privileged individual managed to get his hands on a pair of Cronuts and a Google Glass. He then proceeded to share that with the world by taking a photo of one resting on top of the other and posting it on Flickr.

· A correspondent for Grub Street taste-tested that "New York Pie Donut" knockoff that appeared in some South Korean Dunkin' Donuts last week. Though she admittedly hasn't tried the original, she concludes that the "crunchy on the outside, chewy on the inside" unglazed, unfilled Dunkin' version is "undeniably the best thing I've had from a Dunkin' Donuts."
· All Coverage of Cronuts [~ENY~]