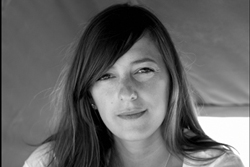 It's building for the guest experience?and then it's building for the operations. There are some buildings in architecture that you build for the form outweighing the function. But here it has to completely marry the two, because the space has to work functionally, and those things have to be completely seamless behind the scenes. Because as a guest you don't want to see those?You need to be able to make sure that your operations team is completely taken care of, their needs are met, and still the guest can enjoy an experience. 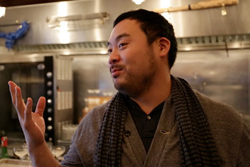 2) David Chang's Wild Mold Hunt: Mitchell Davis, host of Taste Matters and executive vice president of the James Beard Foundation, talks to David Chang about the state of the Momofuku empire. Here's Chang on the research going down at the Momofuku Food Lab:

I do think we're trying to look for flavor in all the wrong places...In a way, all that we've been doing at the food lab in terms of finding and discovering tastes, which is using these molds that have been around for literally almost a million years?which, when combined with foods create very delicious combinations. They're just everywhere. That really has been the study of taste for us, which is "what is delicious?" That's what we've been studying. 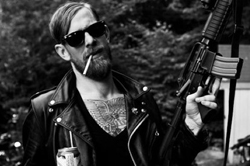 It's not that I am very smart, it's just that I can close my eyes and I can picture molecules moving around in the still and I can understand why they're moving where they are. And fortunately my mentor realized that and he aimed me directly at the beverage/alcohol industry. It's the most bizarre route into this but I'm rather glad it worked out like this because I'm having an absolute blast. 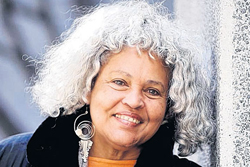 4) The Street Vendor Project and The Vendy Awards: Nicole Taylor, host of Hot Grease, chats with Helena Tubis, managing director of The Vendy Awards and Siobhan Wallace, author of New York a la Cart about the growth of NYC street food over the years. Tubis discusses the non-profit that not only makes the Vendy Awards possible, but provides the legal support to keep street vendors and food trucks legal and financially feasible:

After living the life and seeing the challenges that vendors faced on a daily basis [Founder Sean Basinski] decided to form an organization to support the individual vendors that make up the industry?Anybody who sells anything on the street is eligible to be a part of the Street Vendor Project. 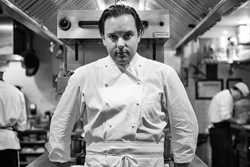 5) Paul Liebrandt on the Universality of Chinese Food: Paul Liebrandt sits down with Leiti Hsu, host of the new HRN show Leiti's World of Mouth, to talk about The Elm, and about what other cuisines have caught his eye recently. Here's Liebrandt on what intrigues him about Chinese food:

Chinese food is one of those cuisines that translates anywhere in the world. You go anywhere on the planet and there's a Chinese restaurant. And why is that?...The fundamentals of Chinese food, whether it be Cantonese style or Szechuan style, there is a crossed theme through all the different styles that has that umami effect, textural effect, depending on, obviously what you like. Whether it be dumplings or noodles, it's one of those cuisines which translates very very well.