Bread in the Doorway: Quaint Custom or Health Threat?

Share All sharing options for: Bread in the Doorway: Quaint Custom or Health Threat?

Trudging to work a decade ago around nine in the morning, you were likely to see brown-paper bags propped in the doorways of nearly every restaurant on your route. These sacks were stuffed with bread, destined to be served sliced with pats of butter that evening. It seemed like a weird and archaic way to distribute bread, but then the restaurateurs probably didn't want to give truck drivers keys to their restaurants. And the sacks stayed there until the staff began arriving, usually around 11 a.m. I often wondered, why doesn't someone steal the bread?

It was apparently some sort of deeply held social convention that no one did. Hungry homeless people passed in the streets, and they knew what was in the bags; sometimes the loaves could be seen sticking out the top. As the years rolled by, the practice of leaving bread in doorways largely disappeared. There are many reasons. Most restaurants simply stopped serving bread because Dr. Atkins and the South Beach Diet convinced the general public that carbs were bad for them. Then along came the gluten scare, whereby many people who were not actually allergic to wheaten loaves determined to avoid them as a faddish lifestyle choice.

There were other reasons, too: some restaurants started making their own artisanal bread, while others — especially new Asian and Latin ones — favored rice or alternate starches over wheat. Franchise restaurants doubtlessly provide their own bread rather than depend on local bakeries, while places like Subway pointedly make it on the premises. And finally, to make ends meet under fierce real-estate pressures, many restaurants that were once evenings-only have started serving lunch and even breakfast, meaning that the staff is there to receive it when bread is delivered. 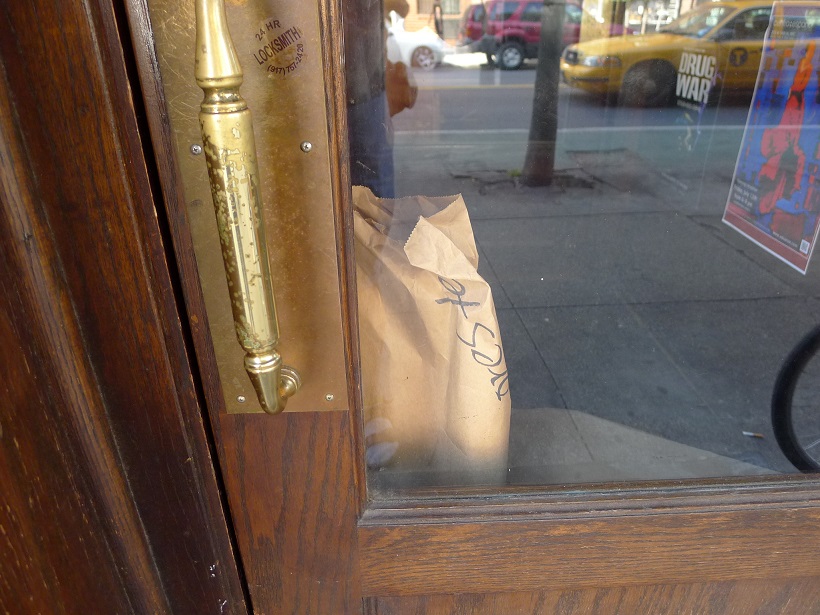 [Bread in front of Toscana]

Anyway, bread had always been a pain in the ass for restaurateurs, not only because it was delivered in the wee hours of the morning. Bread — especially good bread — goes bad fast, and bread in the baskets that goes uneaten has to be thrown away. Many diners took bread for granted, yet it never appeared on the bill at the end of a meal. When bread went out of fashion, owners and chefs must have breathed a sigh of relief. 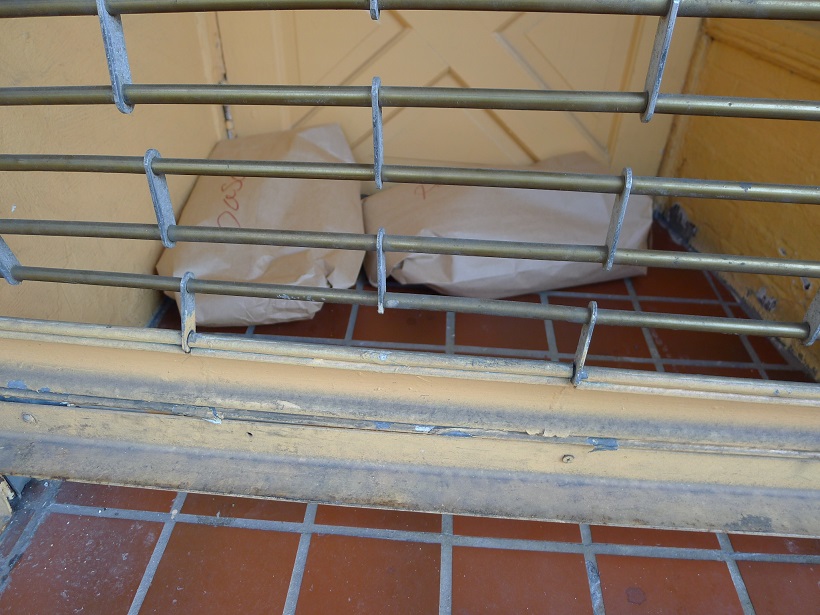 [Bread in front of El Paso]

I hopped on my bike on a recent morning to check on the persistence of bread in the restaurant doorway, riding past storefronts in Greenwich Village, Soho, and the West Village. I found the practice still occurred in about one in every 30 places, most often in old-guard Spanish and Italian establishments. To forestall adulteration, or maybe to guard against precipitation, much of the bread is now hung in giant plastic bags, elaborately knotted. As if you couldn't knife your way into the bag! 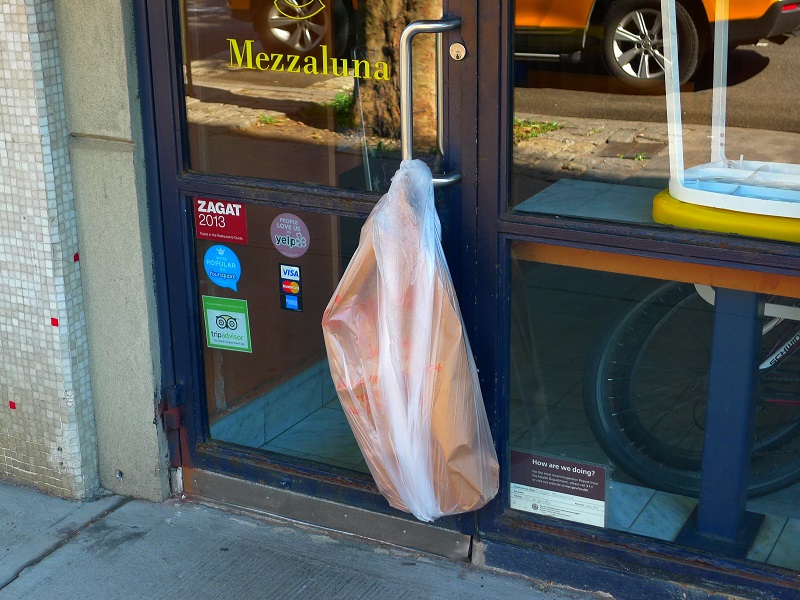 [Bread in front of Mezzaluna]

At El Paso on Houston Street, the bread still in old-fashioned paper bags has been squeezed under a gate that was locked a few inches above the ground the night before. At Trattoria Toscana on Carmine Street, the bread in a paper sack can be seen propped against the window on the inside of the door, suggesting the restaurant has trusted the delivery guy with a key. Dinner rolls sit in trays covered with plastic outside at sports bar The Windsor, located at the iconic corner of West 4th and West 10th — the rolls would be so easy to filch. Perhaps showing the best of both worlds, the day's bread allotment hangs in a paper bag inside a plastic bag at Mezzaluna on Houston Street. 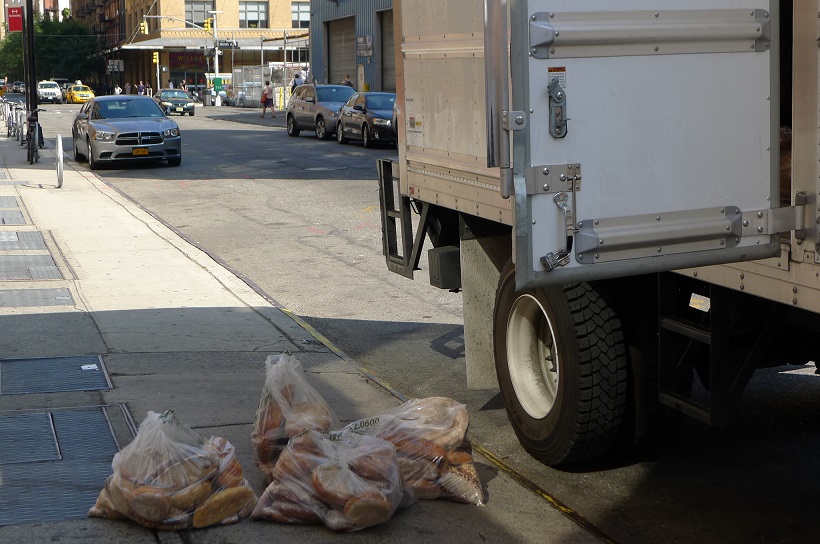 One must be at least partly grateful for the newfangled plastic bags, however, despite their inevitable appearance in a landfill at some future date. As witnessed on 15th Street outside Chelsea Market, your bread often lands on the filthy street at some point during its distribution cycle, as the old ways at least partly persist.