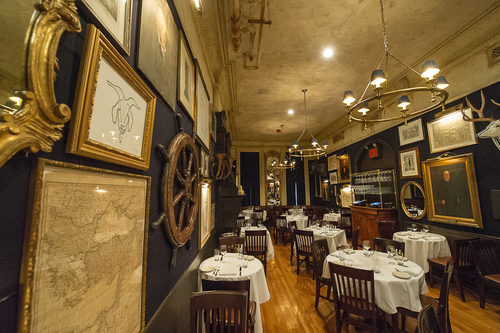 There have never been fewer restaurants that are For Everyone. I'm not sure if this is true, but it seems like it is. I'm talking about your Frankies 457s, which are very much For Everyone. Barbuto is For Everyone. At the risk of rousing the Chang Must Die subset of Eater commenters, Momofuku Noodle Bar is absolutely For Everyone. ZZ's Clam Bar, Charlie Bird, Estela, Costata, Mission Chinese, and The Nomad are all great, but there seems to be a degree of clientele specificity creeping into restaurateurs' minds.

John DeLucie has several times in his career helmed legendary restaurant spaces through a conversion into very exclusive clubs. The Waverly Inn, which put him on the map, was so exclusive when it opened that one had to talk to co-owner Graydon Carter's assistant to get a table. At The Lion, on West Ninth Street, he established a loyal following by being the place "for everyone" that was actually just for friends of the house. Crown, on East 81st Street, is for everyone who lives in New York City's richest zip code, 10021.

To be clear, it's okay to be elitist and it's okay to say, "My restaurant isn't for you." More restaurateurs should have the guts to make such a declaration. It would save a lot of people all that money they spend trying to crash the party. DeLucie is a chef who has been unafraid to cater to a specific crowd and he deserves credit for his candor and for knowing what he wants and going after it.

His latest historic location takeover is of Bill's Gay Nineties, born a speakeasy on East 54th Street in 1924.

So, we proceed into what is now Bill's Food & Drink.

The first thing you notice about Bill's, remember about Bill's, is that it is quite handsome. The walls are covered with vintage maps, portraits, and doodles. The townhouse has wonderful bones, the kind of broken-in wood paneling and aged brass restaurants of a newer vintage have paid Roman & Williams dearly to import.

The music is right, too. In the tradition of Bill's Gay Nineties, there is a piano player in the bar room. On the way out he was playing Billy Joel, which was the appropriate choice for 11 p.m. In fact, the bar room must murder early fall. Being able to open up the storefront and having that bar fill with fresh air makes me want to work in Midtown. It's sort of an al fresco '21.'

I was embarrassingly late for my reservation and the maitre d' greeted me with the exact right amount of scolding. I said, "I'm sorry I'm late. We're ready when you are, happy to get a drink if things have shifted." He said, "We've been ready for you for an hour. Let's go." Great start, all around, the evening starting to appear to be a total waste of Eater coin.

But, of course, Bill's doesn't find itself in the crosshairs of Shitshow Week by accident, so let's pound that pavement a bit. The essential question here is: Can a restaurant be a shitshow on account of the difference between what it promises and what it delivers? Because in that delta Bill's is deeply flawed.

People have too specific an idea of what an heirloom tomato and burrata salad this time of year tastes like for this version to be so bland and the burrata so dry. If you're going to do a plate of fresh kale, the current King of Greens, the expectations are for something light and refreshing. The one at Bill's is on the wrong side of leathery.

In better news, Bill's Bolognese, which reads signature on the menu, was very good; noodles, sauce, meat quotient, umami all as they should be. The trendiest steaks are the fattiest, and that trope is preserved here. After we did a round-robin tasting and it was time to call dibs on a plate to finish, the steak did not get picked last. (The cod did.) 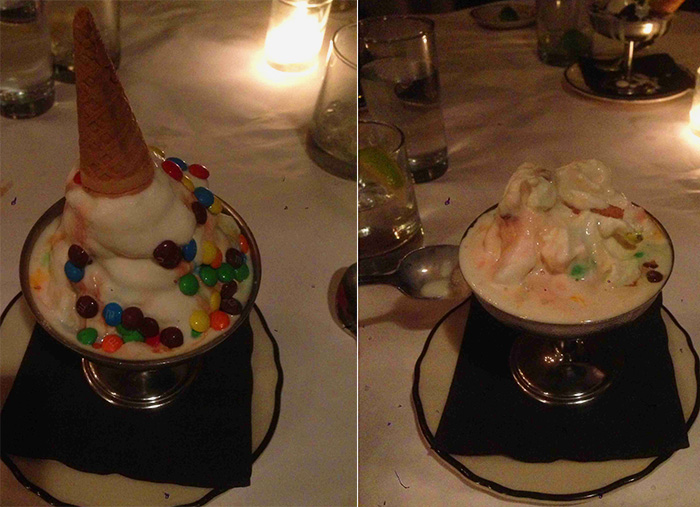 In legitimately great news, there's soft-serve ice cream for dessert. Our table was unanimously in favor it. But here is where Bill's runs back into trouble. First, this soft-serve is $12 before toppings, which go for an additional $1 per for things like M&Ms, Heath Bar crunch, and Oreos. To make matters worse, it's icy. It's not rich and dreamy and restaurant-y, which, thanks to Noodle Bar, we've come to expect when a proper food establishment puts Tasti D on offer.

Given the price and the product available for $5 one block in any direction, and the fact that it's arrived half-melted, here's where you start to hear the Shitshow angels humming a lullaby in your ear.

And, the disappointments start to cascade. This isn't what a Class A operator should be doing with a place that's been a New York treasure for almost 100 years. (Is this really Bill's, by the way? It's not entirely clear it is.)

Those great bones you were admiring earlier are now a problem, because you're listening to a dining room soundtrack through speakers and the piano man through the floor boards. Your wife reminds you how hot it will be downstairs until fall does set in. You're staring down a $438.77 tab before tip (for four; food sub-total, $316; bev, $87) and at $100-plus per, you want to leave craving something. But you can't think of one thing you ate for which you'd return. You now remember the wine list was presented upside down and you notice the weird filet mignon painting (oil on canvas, c. 2011).

You're feeling over promised and under delivered to, and profoundly so. The Shitshow angels are still chirping, a little bit louder now.