Ice Glasses, Party Jams, and Bros in Fur Coats at Minus5

Share All sharing options for: Ice Glasses, Party Jams, and Bros in Fur Coats at Minus5

On a recent Thursday afternoon, two Eater editors visited Minus5, New York's only ice bar, with the intention of seeing how long they could last in its chilly confines. What follows is an AIM conversation about the evening in the ice chamber. 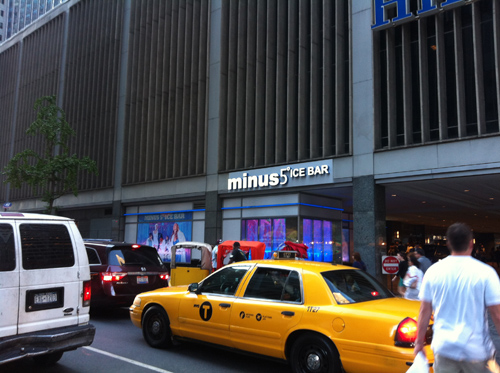 EaterGM: Who was waiting in line for Minus5 at 6:30 p.m. on a Thursday night in August?
EaterMP: It looked like mostly young finance types to me.
EaterGM: Yes, it looked like a bunch of young bankers maybe going to party after work, but also a few people that were on dates. So, we had to wait in a Disneyland-style line for a bit, but it was a fairly short one.
EaterMP: But it did feel like waiting to get on Splash Mountain. 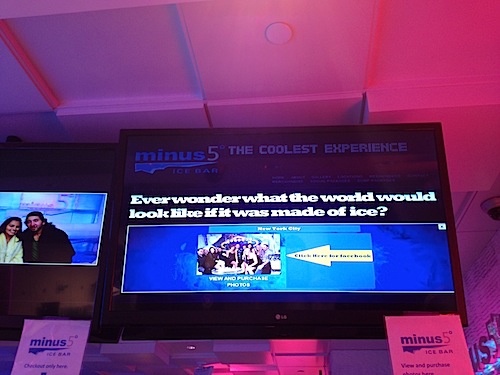 EaterGM: After exactly one minute of waiting in line, someone unlocked the rope and let us go to the front desk, where we got to choose our package — a blue parka for $20 per person, or a white fur coat for $45. We opted for the basic cable package of blue parka, no fur coat.
EaterMP: But most of the people ahead of us were getting the fur coats.
EaterGM: Indeed. As part of the Minus5 experience, they take your credit card and give you a lanyard that has your identification number on it. And then when you get inside, you just tell the bartender your number, and they charge you.
EaterMP: That lanyard had a handy dandy menu on it.
EaterGM: So you can browse the options no matter where you are. I thought it was strange that they gave you not only a blue parka, but these sort of mesh white gloves.
EaterMP: Yes, but it is cold, and the cups are made of ice, so I was glad they did.
EaterGM: They tell you to hold the glasses with both hands. What were your first impressions of the ice chamber?
EaterMP: Kind of underwhelming, actually. Lighting, as expected, involved a lot of purples and greens and blues, and there was some cool-ish sculpture, but it was small. What did you think? 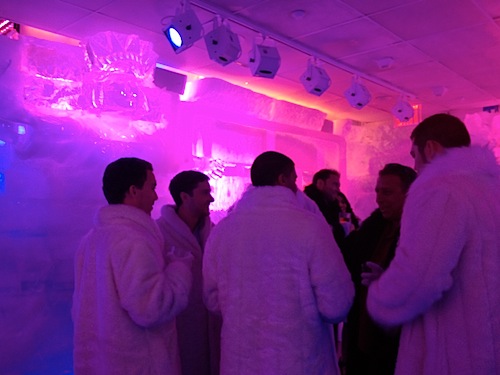 EaterGM:: It was way smaller than I expected — it was like a tiny club that happened to be very cold. It weirdly reminded me of some sort of high school thing, like if you had a "party" in a class room.
EaterMP: Yes. Probably partly because of the weird tile ceiling, which looked exactly like a school cafeteria. 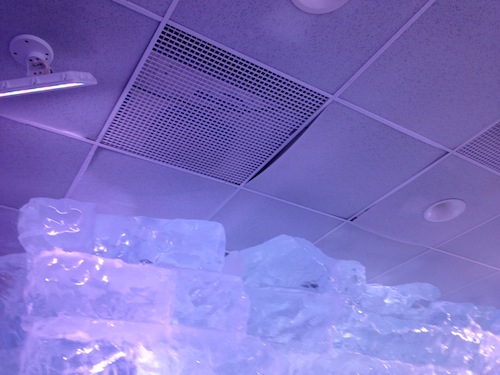 EaterGM: Yes, the walls were covered in elaborate ice sculptures, but the ceiling was covered in styrofoam panels. The finance-types made up the bulk of the crowd. We decided to order the specialty cocktails, just to try them out. No prices listed. How much did you think they would cost? What did you order? 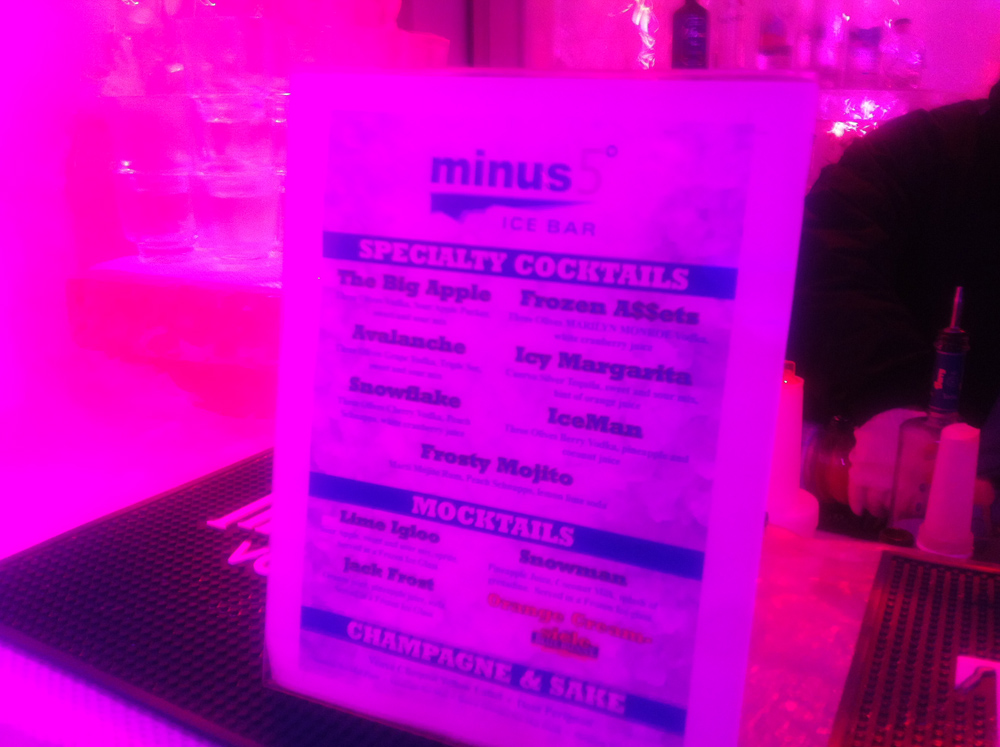 EaterMP: I'm trying to remember the name. It was the kind of name that makes you feel dumb ordering.
EaterGM: It was called like, "Freezing your ass off" or something. I'll have an "I'm freezing my butt off."
EaterMP:The BRRRRR-rita.
EaterGM: I don't remember what mine was called, but it was clearly just vodka cut with Sprite.
EaterMP: Mine was pineapple and coconut and vodka. It tasted like a Starburst.
EaterGM: Yes, these were candy cocktails, but the glasses were made of ice! I was shocked by that, actually. 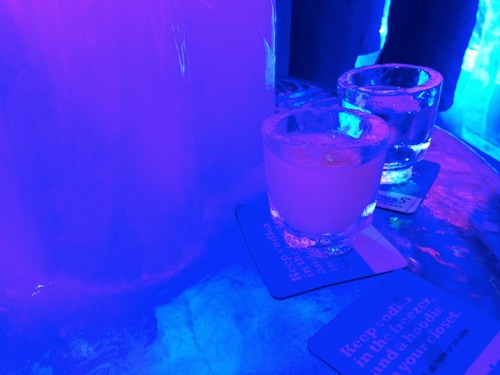 EaterMP: Hah yes. Do you think it improved the drink? I remember mine got slushy at the end.
EaterGM: Possibly. I was thinking after the fact that like, Champagne or something would have been the right move if money was no object. So, we walk over to a perch in the "Central Park" zone.
EaterMP: Oh yes, the whole thing was NYC themed.
EaterGM: There's a Central Park Zone, a Grand Central Terminal zone...
EaterMP: I was fixated on that Statue of Liberty sculpture. 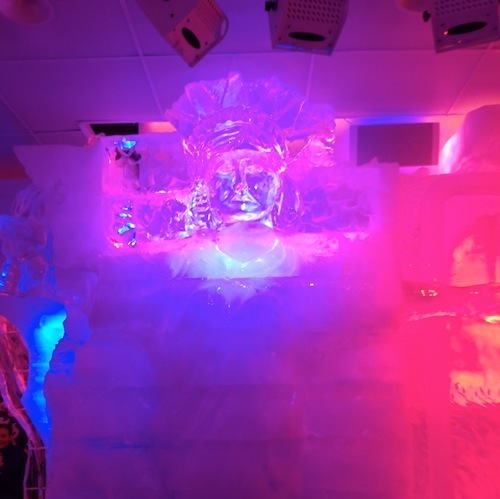 EaterGM: Yes that, was a really sorry sculpture. It did not look even remotely like Lady Liberty. So, at about the 15 minute mark, were you cold?
EaterMP: Yes, but not unbearably so. Just felt like being outside in January, in an ankle length parka. How about you?
EaterGM: Yeah I wasn't too cold. At about the 20 minute mark, we started to ponder the logistics of everything.
EaterMP: You were questioning whether all the ice was really ice
EaterGM: What do they do with the glasses? I thought that the room might have been covered in cold glass or something. You wear gloves, so you'd never know.
EaterMP: But I believed it. Ice has a certain slippery quality
EaterGM: At one point, after spilling some of my drink, my glove stuck to a part of the countertop, and that's something that happens with ice.
EaterMP: Yes, although we will never know for sure about the upper walls. But if it were fake, why would the Statue of Liberty turn out so ugly? 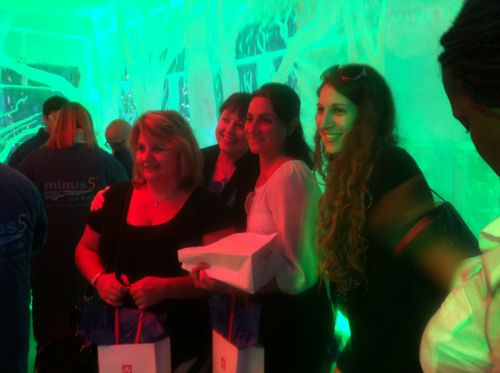 EaterGM: Good point. At the 25 minute mark, a bunch of people came in without parkas, and that really threw off the illusion.
EaterMP: I didn't realize it was even allowed. They seemed to be just passing through. Like, they took some pictures and left.
EaterGM: I thought you had to pay $20 and get a parka.
EaterMP: Why else would you wait in a roped off line? But would you want to go in without a parka? It really was cold.
EaterGM: Yeah, it was definitely too cold for shorts and t-shirts. Okay, so we go back to the bar for round two, and we decide to talk to the bar man. 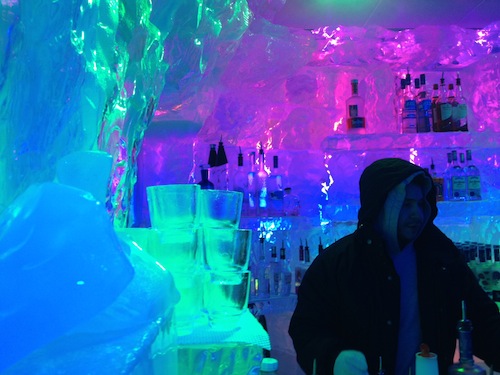 EaterMP: He was a nice guy.
EaterGM: What do you think that guy's story was?
EaterMP: He was young, so probably just needed a bartending gig. This is not a job for just anyone.
EaterGM: Young, charming, handsome, pretty laid back. My guess: Broadway actor, makes a ton of money from this job.
EaterMP: That sounds about right.
EaterGM: I asked the other bartender what they do with the cups. What was his answer?
EaterMP: They throw them out. He pointed to a couple cheap plastic garbage cans. 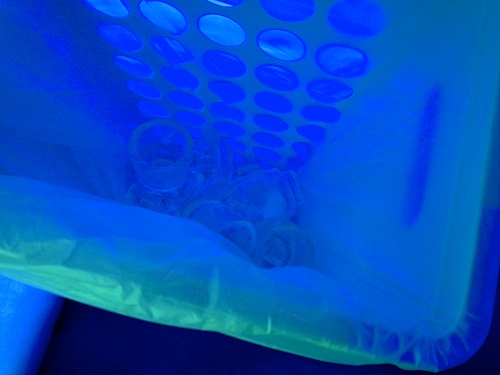 EaterGM: Yes, the trash can full of ice cups. But first he said, "We reuse them. No I'm just kidding we throw them out."
EaterMP: Haha, yes. But you had been afraid that they reused them.
EaterGM: So, the bartender said that most people stay for about 45 minutes, but the MOST some people stay is like 2.5 hours.
EaterMP: Yes. Drinking a lot of whiskey apparently. He also said that there is the occasional dance party, but maybe mostly to stay warm. People were pretty tame when we were there though.
EaterGM: So, for the second round, we skipped the candy cocktails and both drank whiskey. Then we went into this sort of chamber offshoot, where they had benches covered in fur.
EaterMP: And a fake liquor cabinet made out of ice.
EaterGM: This was like, I think, the romantic area.
EaterMP: Clearly. Yes, slightly dimmer lighting.
EaterGM: Mostly couples in there. This is where the love connections happen in the ice chamber, and to my eyes, the other people in there were on dates. By this point, I think we had seen like two or three people drop the glasses and break them.
EaterGM: Also, the music was terrible.
EaterMP: Yes. Like pop that was just slightly out of date, by half a year maybe.
EaterGM: Instead of Now That's What I Call Music 52, it was Now That's What I Call Music 48. So, at one point the guy that cleaned up the glass popped his head in and was like, "Everyone cool in here?"
And everyone nodded, and he left. So, they monitor the room slightly.
EaterMP: Yes, there were a couple staff that were like chaperones or something.
EaterGM: I don't think you can get ill in the ice chamber,or even hurt yourself. You can maybe slip on a drink, but that can happen anywhere.
EaterMP: No. And I imagine if anyone starts trying to climb anything... Kids would have loved this place, but you must be 21 to enter. They even had virgin drinks.
EaterGM: Right, for that person in your office who doesn't drink, but has to go there with the crew. About 30 minutes into this experience, the bankers in the wooly coats left.
EaterMP: They were clearly off to more serious partying.
EaterGM: It was like they realized, "What the fuck am I doing in this stupid place. I could be drinking in a real bar. Let's go." They mostly just took photos of each other, as I recall.
EaterMP: I sort of think it was something they'd been joking about doing for a while, and they were just there for the novelty of it. But I guess that's the whole point. At what point did you start to feel uncomfortably cold? 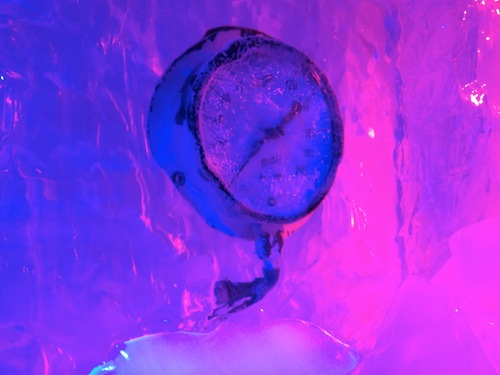 EaterGM: At the 40 minute mark. Well, my hands started to clam up. The gloves got wet, and I could start feeling it in my toes.
EaterMP: Halfway through the second drink, my fingers were really totally numb.
EaterGM: But ALSO, the novelty wore off. The ice chamber is small.
EaterMP: Yes, I mean the whole thing is small. There's not a lot to see, and at a certain point you just get uncomfortable. I remember thinking I had better start drinking faster.
EaterGM: I was thinking that if this same concept was like eight times the size of this one, and it was in the Hamptons or something, people would love it. Come party in the sprawling ice dungeon!
EaterMP: And if it were a little classier in terms of drinks.
EaterGM:: Agreed. So at the 55 minute mark, we decide to cash in our chips. Not necessarily because were couldn't stand the frigid air, but a combination of malaise/empty drinks/cold hands/frozen toes.
EaterMP: That sums it up exactly
EaterGM: Honestly, it did feel nice to go back into the regular temperature
EaterMP: Yeah, it was a weird feeling. My feet stayed cold for a while
EaterGM: So, on the way out they try and sell you a bunch of merch and photos of yourself. We opted out, but paid the bill: $105. Was that more or less than you expected? 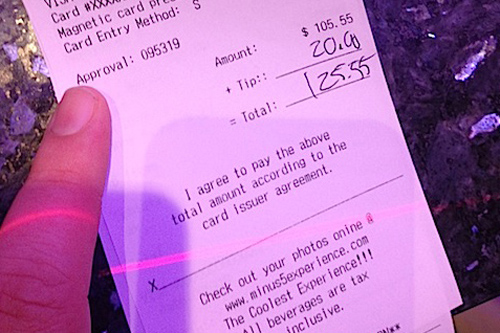 EaterMP: I wouldn't have been surprised if it was more, just irritated.
EaterGM: Yeah, that was about what I expected.
EaterMP: They could have charged a really ridiculous amount for those drinks, but they only charged a kind of ridiculous amount.
EaterGM: Exactly. We estimated that they were maybe $15. but they came in ice cups. So, there's no reason to get into the shitshow/non shitshow argument with this place, because it's not really a restaurant, but rather a cocktail-based tourist attraction.
EaterMP: Heavy on the tourist attraction.
EaterGM: But as a cocktail-based tourist attraction, do you think it succeeded?
EaterMP: Mmm...as we said, could have been more impressive
EaterGM: Yes, I mean, the price was basically fine
-- in line with what I expected. But with better drinks and a bigger room, then it might actually be fun or something.
EaterMP: Right, and the service was totally fine and great too, but it just felt a little....rinky dink dare I say.
EaterGM: Indeed, it could have had more sizzle. Would you go again? If someone else is paying?
EaterMP: Um...maybe if they had their heart set on it, but I would have much less patience for the whole thing.