All throughout Shitshow Week 2013, the Eater editors and friends of Eater will file impressions of restaurants around the city. The goal of these reviews is to determine whether or not these establishments are, in fact, shitshows. Up first: Sietsema with a review of King Noodle. 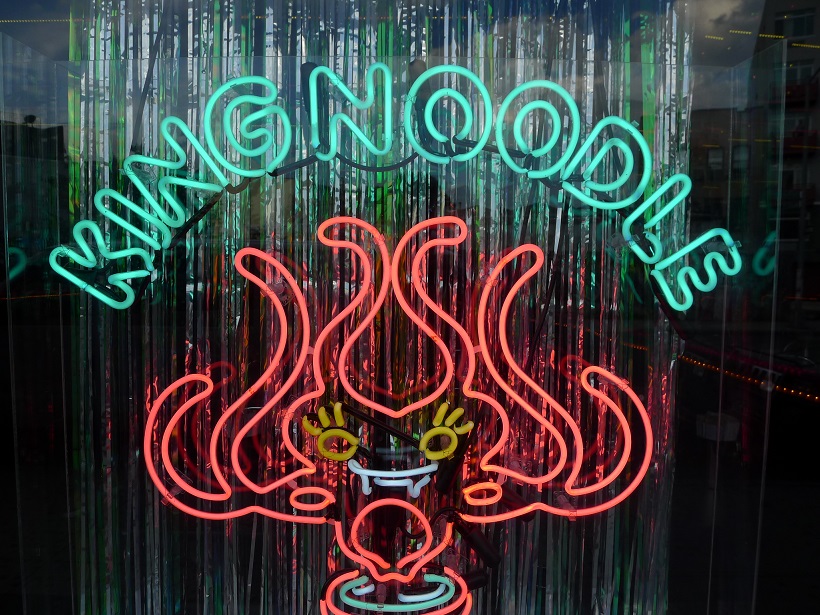 What is a shitshow, anyway? As defined by Eater, it's any restaurant that, by dint of crappy food, poor service, failed lighting, suspicious odors, elevated prices, uncomfortable or objectionable interior design, high noise level, bad concept, sketchy location, or a combination of these factors, fails miserably at the task of feeding the public a pleasant meal. But what if a place earnestly desires to be a shitshow? That seems like the case with Bushwick newcomer King Noodle. 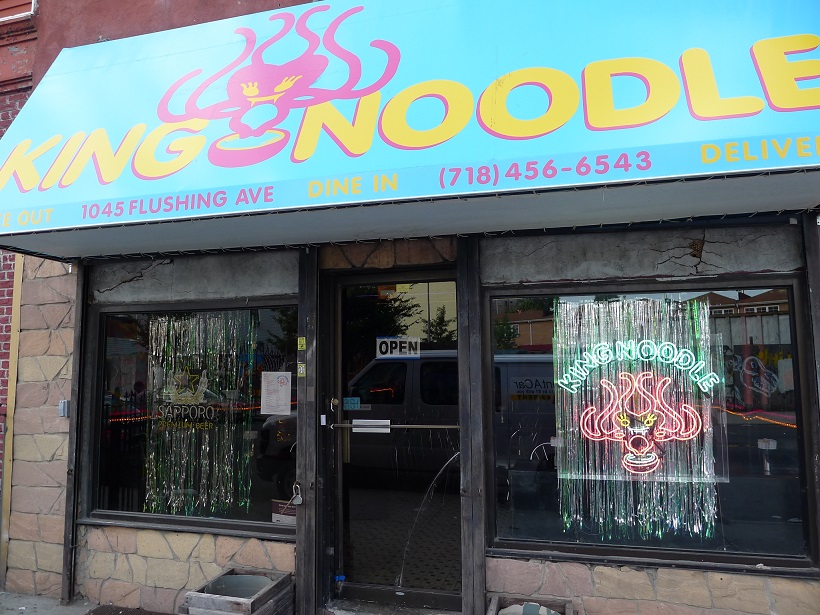 What appears to be a fanged neon octopus with heavy eye make-up leers from the front window, framed by a waterfall of silver streamers. So bizarre is the glowing cephalopod that nighttime drivers on Flushing Avenue slow down to gawk. Something further about the place — perhaps the ear-searing pink, yellow, and turquoise awning — makes you hesitate to step inside. As you do, the guys sitting in front of the Dominican billiard parlor next door snicker with contempt. If nothing else, King Noodle happily serves as the neighborhood eyesore. 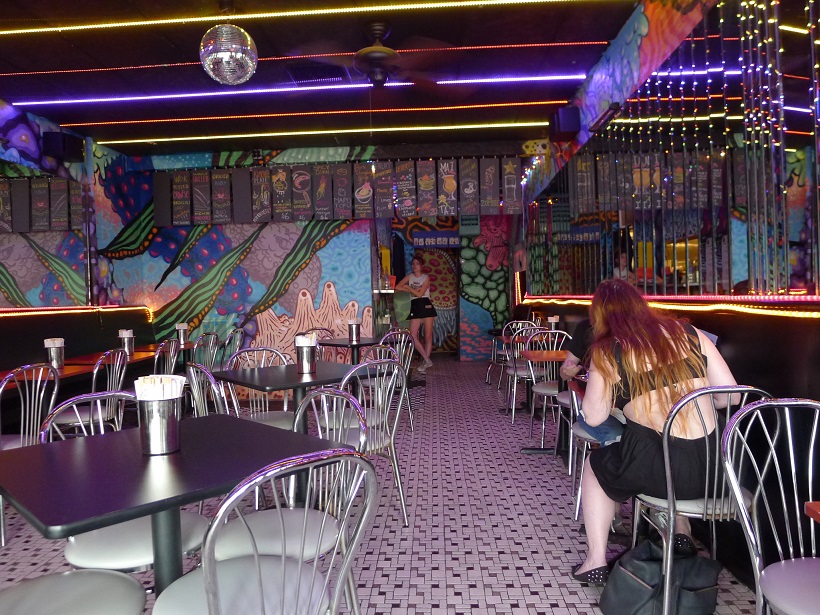 Inside, the Rolling Stones' admonition to "Paint It Black" has been scrupulously adhered to, except for Day-Glo murals of fantasy creatures neither plant nor animal, but somewhere in between. In a comic book they'd be okay, but in a restaurant they're plain creepy. A disco ball hangs from the ceiling, apropos of the good times about to elude you. One Eater commenter wondered, "was the design intent to be as hideous as possible?" 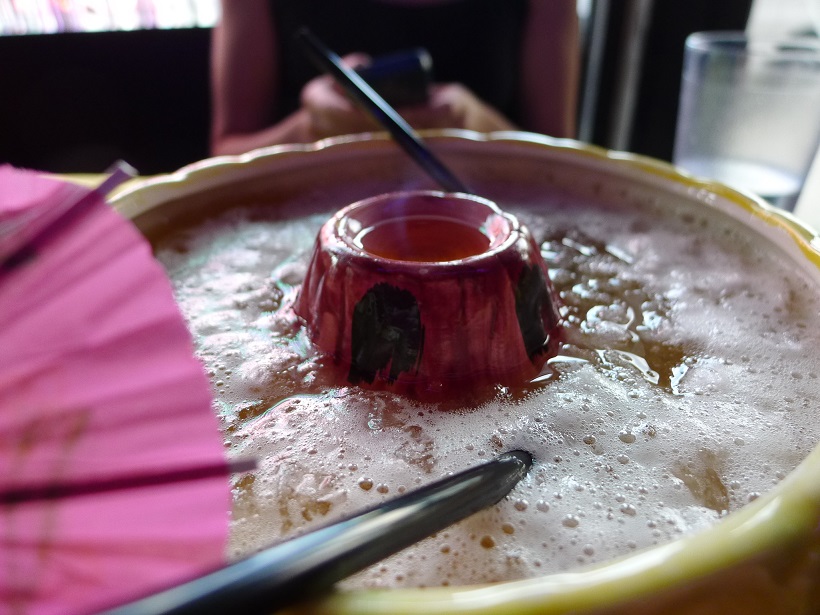 While the Day-Glo creatures occupy their own remote universe, the drinks are pure tiki bar, a retrograde fad that reappeared and then fizzled a few years back. Why revive it now? These sugary concoctions have names like Zombie, Mai Tai, Highball, and Scorpion Bowl. When a friend and I ordered the Scorpion Bowl ($20), it came in a yellow-and-green volcano shaped like a bundt pan with a flame flickering on top. Don't singe your eyebrows as you lean over to suck down the last of your drink with a straw! The cocktail was foamy and strong, enough to make two tipsy, but when I tried the Mai Tai a few days later, it was watery. And with a float of Kahlua on top, it wasn't really a Mai Tai. Still, the drinks are a dollar or two cheaper than you might expect in a cocktail lounge.

The food strikes a totally different note. Rather than the flamboyant (and often mediocre) "Polynesian" fare of the traditional tiki bar, King Noodle offers pan-Asian fusion food, with elements grabbed seemingly at random from Japanese, Korean, Thai, Italian, and Chinese cuisines. The main dishes are based on noodles, with a further assortment of small apps styled as "snacks." In an opening-week notice, the Daily News described the menu as "trippy hipster food," and went on to say that the place "has hipsters flocking for their late-night munchies." 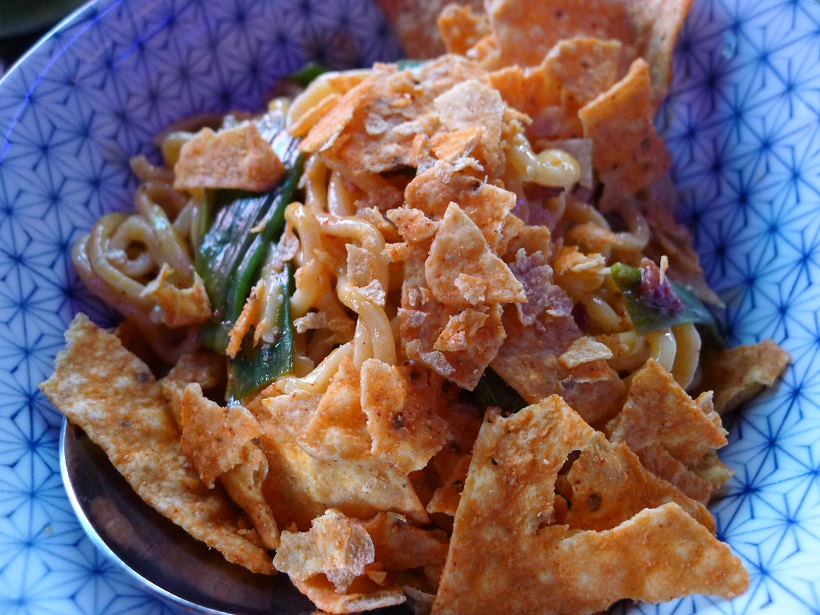 Kimchee carbonara ($14) promises much but delivers little: a bowl of sticky wheat noodles with crumbled Doritos on top that leaves you wishing it were Kraft mac-and-cheese. "Rice cakes with krab and mozzarella in spicy sauce" ($14) is a modest serving of rubbery frisbees tossed with fake crab stick in a bland, brick-red sauce, with nori sheets and pre-sliced supermarket mozzarella thrown on top. You can find the inspiration for this dish – minus the Japanese and Italian flourishes – for about $5 at Food Gallery 32 in Koreatown at a stall called The Gochujang, which specializes in food served to Korean schoolchildren.

There are green curry noodles with bamboo, wavy noodles with pork and shrimp, and Spam fried rice –the latter a spitting image of what you'd get from a Chinese carryout, with Spam substituted for chicken, beef, or pork. It's actually quite good, mainly because the hot spam gives the dish an extra salty and greasy charge. The apps can be good, too, especially a whole grilled mackerel that perfectly reproduces a Japanese gastropub standard, but with a little pile of kimchee on the side so bland it might be mistaken for plain cabbage. It's as if a perfect dish were intentionally sabotaged. 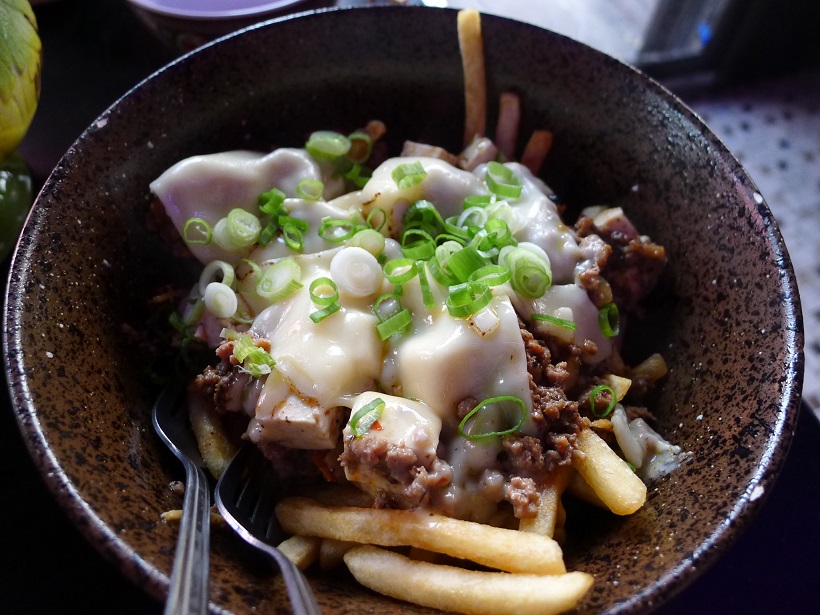 Of the limited roster of items I tried, the very best – and the one I might actually go back for – was ma po French fries, a regular special. It merges a rather tepid version of the Sichuan classic (heavy on the chile oil and plain ground beef but minus the numbing peppercorns), with some good French fries and more of that supermarket mozzarella. Though the little cubes of tofu totally get lost, the dish has an enjoyably hair-brained and illogical quality, a recipe with unlimited fiery potential transformed into an exercise in mellowness. 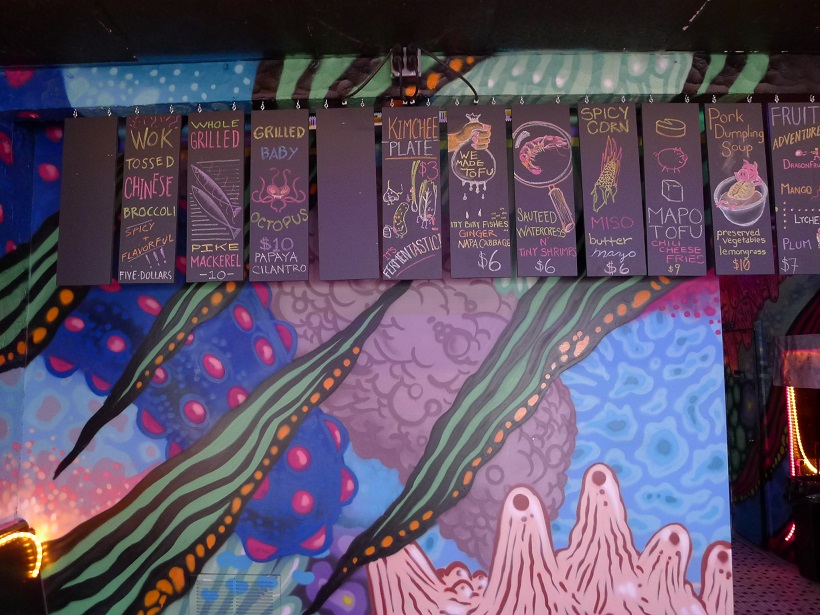 Indeed, much of the food at King Noodle has a feverish, slapdash quality about it, as if assembled from ingredients left in the refrigerator by previous tenants in a meth-themed episode of Chopped. While some dishes show promise, they lack the circumspect contemplation and chefly touch that would have made them good. But is this what stoner-foodie-hipsters want to eat late at night? My guess is that they'd rather be at Pok Pok.
Verdict: Shitshow.