The Airing of Grievances: Part 1

Share All sharing options for: The Airing of Grievances: Part 1

As a Shitshow Week special, Eater asked some of New York's best food writers to anonymously share their gripes and frustrations about the restaurant scene these days. What follows is a list of complaints, with no names or affiliations attached. Stay tuned for part two tomorrow, and an airing of grievances from chefs and restaurateurs on Wednesday. 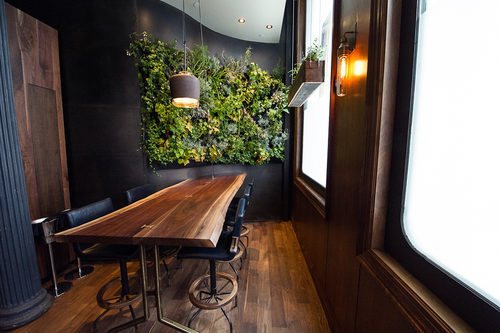 [Atera Krieger, 03/29/11]
1) Atera. Three things experienced during a recent meal here. 1) It's remarkable to see a restaurant fall off in quality so epically in a short time. At one time not very long ago, the food there tasted like food and was enjoyable. 2) Many fine dining restaurants seems to suffer from this, but it was clear that no one is actively tasting the food, either during service as dishes are being plated or, more importantly, sitting down at some point to experience the tasting menu. Too much food, much of it heavy, and none of it was very good. 3) Finally, I couldn't help but think of several recent effusive blog posts and Flickr sets raving about the very meal we had. Those people may be the biggest Shitshows of them all.

Great service, though. And I hear the burger in the lounge is worth trying. 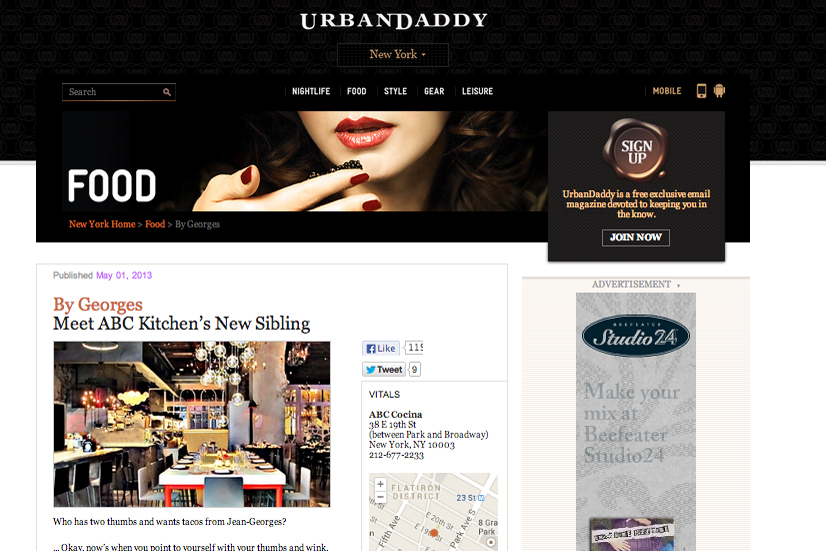 2) Why am I still being asked flat, sparkling, tap? I know it's super Euro or something, but just put it on the menu and be done with it. Tap is fine. Really, TAP IS FINE.

3) Urban Daddy staffers posing as event planners for early access to raw restaurant spaces to "scoop" the competition is a real shit stain that real-life journos covering openings have to contend with.

4) It's nice that you had a cool summer vacation a few years back, but two-week Noma stages don't get "former Noma" on the resume (and writers should fact check whenever they see "former Noma" on a resume because it's usually bullshit). 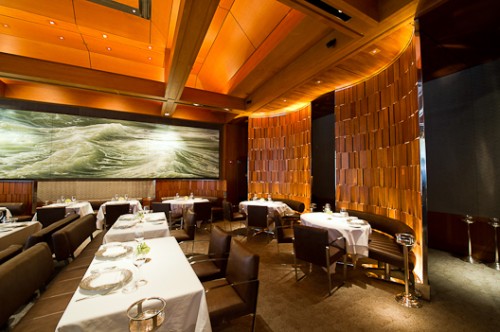 5) I hate how few restaurants have large round tables for parties of eight to 10. ABC Kitchen is maybe the only place I know of offhand where you can have a big-group dinner and actually interact with everyone in your party.

6) I hate the chefbro club. It's both intimidating and off-putting. These guys are all really nice (for the most part) but there's something sort of icky about how publicly their high-profile friendships play out, whether it's on Twitter or through collaborative dinners or blurbing one another's cookbooks. I know it comes from an authentic place of genuinely liking and supporting each other, but nevertheless it feels a little Kim-Kanye, a little manipulative of the media coverage. It also makes it hard for me to eat at one of their restaurants without feeling like I'm participating in the performance.

7) I hate how much unconditional love everyone gives to Le Bernardin. Eric Ripert is charming and talented, but he really runs two restaurants in that space: One that caters to VIPs, and one that caters to everyone else. Call it the Daniel effect (or the Le Cirque effect, if you'd prefer to reference Reichl): I've eaten there when the kitchen has known who I was, and I've eaten there anonymously, and they were wildly different experiences — the civilian meal was good, but not as life-alteringly great as it had been when I was PX'd, and the service was dismissive to the point of insulting. That experience retroactively soured me on the great ones I'd had before, but I decided it was worth another shot. So I went not too long ago to celebrate a friend's birthday — the reservation was in her name (she's not in food) and the meal was, again, a shockingly unpleasant experience. Enough. I'm over it. Treat all your guests well, not just the ones who are known quantities.

10) I hate those stupid giant-rimmed bowls with the tiny little divot in the center that all the tasting-menu restaurants use for your two-bite eleventh course.

11) I hate Bourdain's public persona. I like the actual guy, though.

14) I hate how frequently I'm given glasses that are that particular kind of dirty where they smell terrible. Seriously, is this a new thing? I never used to send things back, and in the last year I've been sending back what feels like one drink in five. Even water glasses. That's just so disgusting, especially at really nice, lovely restaurants.

15) I hate how closely two-tops are crammed together along banquette walls, especially when hosts/servers don't understand to pull the table out when seating me. I have a sizable ass. It is not possible for me to get into or out of there without rearranging the furniture, and it's embarrassing to have to do it myself. I can only imagine how mortifying it is for the folks whose asses are even larger than mine.

16) I hate the Foodie Magician.

18) I hate how many chefs think they can pull a modified David Chang and open some high-concept place at age 23 and expect to be taken seriously and totally change the game right out of the gate. I really want to be supportive of new talent and new ideas, but there's a profound aftertaste of entitlement that sours me on so many places that might otherwise have the potential for greatness.

20) I hate "programs." Cocktail programs. Beer programs. Pickle programs. Ice programs. Food programs? "We have a really exciting food program going on, where we source ingredients and then cook them and serve them to you." Shut up.

[Photo: David Sherwin/Eater NY]
21) David Chang is not the goddamn messiah. He runs some good restaurants and he's an innovative guy, but people who have orgasms over his food don't seem to have bothered to walk a mile and a half south of Momofuku Noodle Bar to Chinatown or two miles northwest to Koreatown.

22) Just because the beef comes from Pat La Frieda doesn't mean it's a great hamburger. I'm looking at you, Bill's Bar & Burger, but not just at you.

23) It's old news, but a Michelin star for The Spotted Pig? Seriously?

24) No, I'm not going to Smorgasburg this weekend. 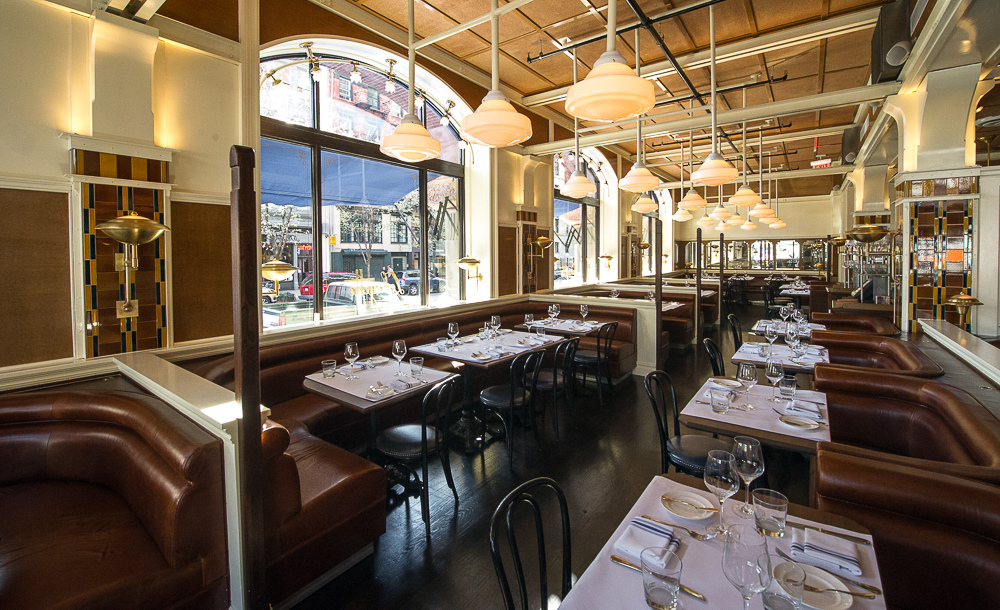 [Lafayette by Krieger-- possibly the restaurant mentioned below]

25) The fact that people were surprised when a certain hotly-anticipated all-day French brasserie serving credible but by no means revolutionary fare only received one star from the NYT. The food at said unnamed restaurant is cooked well, sits pretty, and tastes good, but to earn multiple stars, boundaries must be pushed. (NOTE: Some of the Eater crew may disagree with me here, but hey, you asked.)

26) "Spicy" food that's not actually spicy — I'm thrilled to see the rise of nouveau ethnic restaurants outside of traditional enclaves, but if you're going to offer lesser-known regional specialities, don't be afraid to play up the spiciness, the sourness, the funkiness, or the herbaceousness that makes those dishes special. New York diners are a sophisticated bunch, and the waitlines at joints like Pok Pok (which serves ultra-traditional regional Thai) and Mission Chinese (extremely nontraditional, bordering-on-gonzo Chinese...ish) prove that there is an audience willing to get a little weird.

27) I can't believe I'm even bothering to say this, but fucking Cronuts. Are they worth the wait? Let me put it this way: Yes, they're good, but so is taking a bite of a croissant and a doughnut and mushing them both around your tongue at the same time, and you don't need to stand in line to make that dream a reality. Get one of DKA's kouign amanns instead and shut up already. 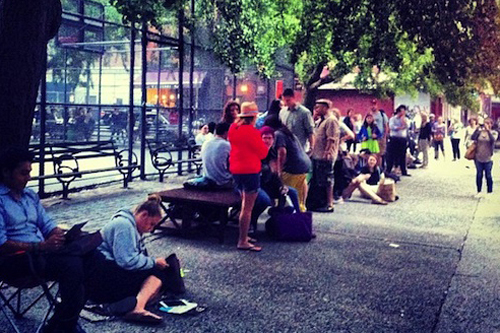