Share All sharing options for: Tips for Cooking Summer Corn From NYC Chefs 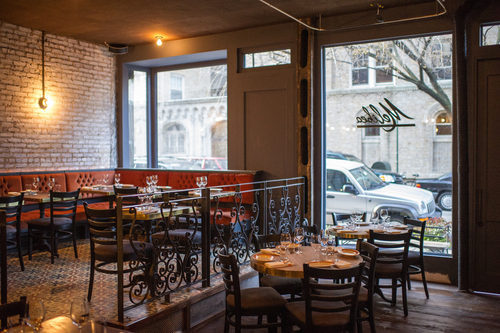 Locally grown sweet corn is available at the greenmarket from early July through August. It's the quintessential summer vegetable, and chefs love playing around with it. Eater recently asked 11 New York chefs for their quick and easy tips for preparing summer corn. Below, you'll find recommendations and recipes from Galen Zamarra, Jesus Nunez, Liza Queen, Al Di Meglio, and several other great chefs:

Joshua Sharkey, chef/owner of Bark: Sweet corn at its peak is really best eaten raw or lightly charred in my opinion. It's really tender and sweet, and doesn't need much cooking done to it. At Bark, we char it on the griddle and then remove the kernels. I like removing it from the ear to serve as it's a little easier for the guest to eat, and doesn't get you in a lot of trouble if you're on a date (no one likes corn in their teeth). Corn and heat are a great match. The Mexicans really have it best for me: chile, lime, cotija cheese, and mayo. We do a play on that at Bark with our version of street corn. Lighty charred and dressed with a chipotle - cotija cheese dressing and a drizzle of lime.

Macks Collins, chef at Rouge et Blanc: "People should soak their corn in a sugar heavy brine. With whatever flavoring they like in the husk. Then grill in the husk on a hot grill. Helps corn that maybe less sweet and imparts alot of flavor." [Photo]

Al DiMeglio, chef at Rubirosa: What I love to do is usually make a risotto with it. I'll use the corn in a few ways to get the most flavor out of it and to show off how amazing it is. I shuck the corn and juice and strain the kernels. The corn juice will be added at the end to help thicken the risotto and it helps bind and give flavor to the risotto so you don't have to use that much butter at the end. I also grill the corn in the husk after soaking it in a brine of beer, salt, and herbs. After it is grilled we will peel it, shuck it and toss the charred kernels in the risotto close to the end for flavor. Finally, to really make the risotto sing, we make a stock with all the cobs and Parmesan rinds to cook the risotto in. Of course adding bacon, shrimp, or grilled scallions as well to the risotto won't hurt but the corn risotto on its own is great as well.

Sohui Kim, chef/owner of The Good Fork: SWEET CORN!! I can't wait. Fresh sweet local corn with so much juicy pop and none of the grainy starch that exist in corn that travels long distances. My all-time favorite way to eat that corn is just to soak in its husk for a half hour and grill till tender. Peel off the husk and roll over a log of butter with a pinch of salt! Yum! If that is too simple, I also like to make fresh corn cakes. Puree the corn kernels. Sometimes, I like to add some pureed soaked split mung beans, add chopped up kimchi and some cooked bacon and fry it up! Or saute off kernels with shallots and butter and add roasted mushrooms to the mix. It makes a great bed for any grilled fish with a squeeze of lemon! [Photo]

Zahra Tangorra, chef/owner of Brucie: I love using raw corn in a salad. Throw in other things that are a similar shape, like fried chickpeas, pistachios, diced cucumbers, grapes...maybe some salty cheese...lots of fresh herbs and a very tangy dressing and your all set! Also, we boil the stalks with parmigiano rinds to make a killer corn parm stock. [Photo]

Jesus Nunez, chef/owner of Melibea and Barraca: You now that corn is not an ingredient that we use a lot in Spain, so when I came here I felt in love with corn, and I started cooking and testing corn. Sweet corn is an ingredient that if it's good and in season, you can eat it raw, but normally I boil it in salt with water for three minutes with butter, maldon salt and black pepper. For the restaurant, one of my favorite combinations is sweet corn cream with seared foie gras, fried corn, and salmon roe. I like to interpretate this traditional beach pot where you boil lobster, potatoes, corn, and sausage. I don't remember the name, but I made it with purple potato puree with corn seeds, confit pork belly, and lobster tail with a lobster gravy. Another dish that I love to do is sweet corn ice cream with roasted tomatoes and pimenton soup — the combination of the spicy, the acidity of the tomato and the sweet corn with the contrast of temperature is amazing. Sweet corn and saffron is one of my favorite combinations and the color is a beautiful bright yellow.

Matt Lambert, chef/owner of The Musket Room: On a grill with butter! My parents used to have big family barbecues at our home. Sweet corn and mussels were always in the grill, and they always got hit with butter and salt. No need to change the flavor of a perfect ingredient! [Photo: Kitchit]

Liza Queen, chef/owner of Potlikker: In general, and not to get all Alice Waters on your ass, I would say that even if you never, ever go to the farmer's market, it is worth it to go during corn season. As soon as the cobs come off the stalk, the sugars begin to convert to starches. So if you are looking for that perfect, sweet, pop-y crunch, you want to get the stuff that has been picked most recently. There was one unemployed month in my youth where I took to raiding neglected plots in a nearby community garden ( I know, I know, that is horrible), but one of these patches had corn, and I used to get a pot boiling on my stove, run and grab and ear or two, and be able to get it into boiling water about four minutes later. It was the best corn I have ever eaten, and pretty much worth any bad karma I may have accumulated.

And when I have corn that I know is super fresh, I really would prefer to cook and eat it fairly unadorned. A quick dip in boiling water, good butter and Kosher salt. Once it reaches day day through whatever, then I start to play. . .

If I were to encourage you to make any of the above, I would go with the dishes that seem to be sadly neglected in northern homes, despite the relative ease with which they can be made: maque choux and succotash.

Evan Hanczor, chef of Parish Hall: Two of our favorite ways to use corn in the summer are (1) in a chilled sweet corn soup and (2) sauteed with other summer vegetables for a rich vegetable succotash. For our soup, we simply sweat a little leek or yellow onion in butter until tender, then add some cobbed corn kernels, cover with water, add a pinch of salt, and simmer about 20 minutes until the corn is tender, then puree everything in a blender until smooth, strain, and chill (it's even more delicious if you use the extra corn cobs and husks to make a quick stock, and use that to cook the kernels).

For the succotash we dice up whatever's available — zucchini, cucumber, wax beans, onion, peppers — mix it with corn kernels, and pan-roast the vegetables in a little oil or butter. Season with some salt, pepper, and fresh herbs. Delicious with chicken, pork, mushrooms, or fish. [Photo]

Galen Zamarra, chef/owner of Mas (Farmhouse) and Mas (La Grillade) : I like to char corn on the grill, and make salads and soup out of it. For soup, I lightly brush the ears with Grapeseed oil, and char them rather severely over a wood fire. Then cut off the kernels. I make a stock out of the cob which is then the base of the soup. Sautee onions, garlic in a little butter and add the corn, touch of cream and the corn stock. Simmer 15 mins and puree. I serve it garnished with shishito peppers and tarragon. Corn is something that really can take a lot of salt, pepper and butter — so I'm never shy with those. [Photo]