Yesterday morning, Eater reported on the surprise opening of our very own branch of the West Coast chain Umami Burger, on Sixth Avenue in Greenwich Village – surprise, since the doors swung open, not in the evening as had been widely broadcast, but at 11 a.m. The photo that accompanied the piece showed customers already rushing the entrance like football tacklers. What New Yorker can resist becoming part of such a spectacle? I was soon over there on my bike, pulling up at exactly 12:52 p.m., hoping to hit the sweet spot before the one o'clock mega-rush.

When I arrived, there was a crowd of around 40 nervously milling. Some of them were trying on the free Umami sunglasses offered out front in what looked like an ash tray. A reservationist stood outside clutching a tablet, where she was efficiently taking first names only and depositing them on a website called Noshlist, which keeps track of the waiting line by a single first initial, notes how long you've been waiting — making the whole thing seem like an agreeable game. At that point I noticed that everyone outside was glued to their smart phones, watching their minutes accumulate on the website. I was told my wait would be 40 minutes, and thenceforth was known only as R-1. 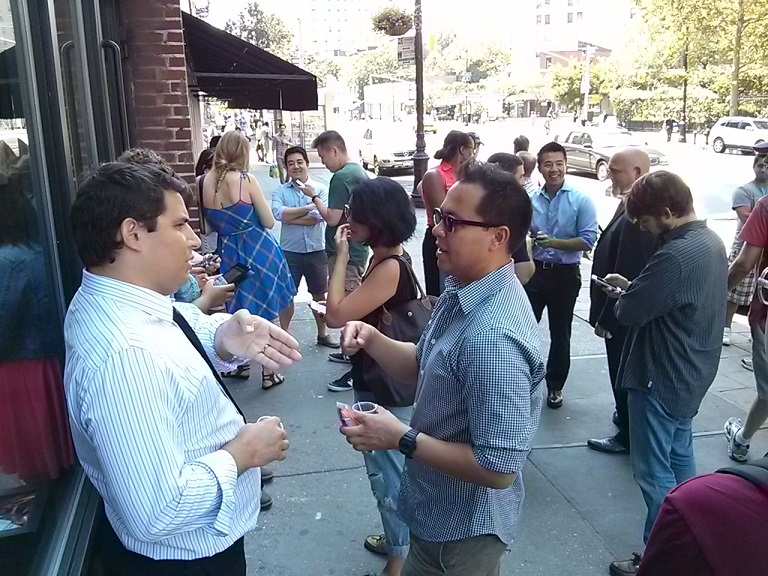 As the minutes crawled by, I peered through the smoked glass windows. I fidgeted. I consulted my phone repeatedly, and took satisfaction as my moniker moved up in the queue. I heard the tablet-wielder tell parties newly arriving that their wait would be an hour, and later, an hour and ten minutes. But just as R-1 reached 23 minutes on the website — far short of the 40 minute wait expected — I was summoned by the buzzing of a text message in my pocket, like a small and angry insect. 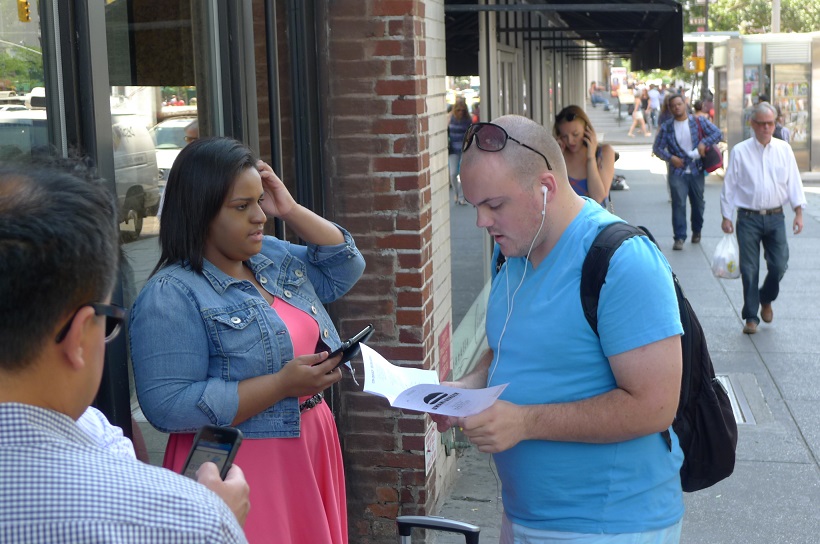 Once inside, I noted that the post-industrial décor featured dark gray walls, a pair of ducts depending from the ceiling, a series of helicoid hanging light fixtures, and a bar that glowed pink on one side of the room with the promise of pricey alcohol.
I was seated at a two-top at precisely 1:18 p.m., easing into my firm banquette like a sweaty hand into a rubber glove. The room — which seated perhaps 60 — was completely full. The Shins were thumping over the P.A., and a manager in a blue shirt was working the room, asking diners how they liked everything. The woman on my left gleefully reported, "These are the best fried pickles I ever had in my life!" 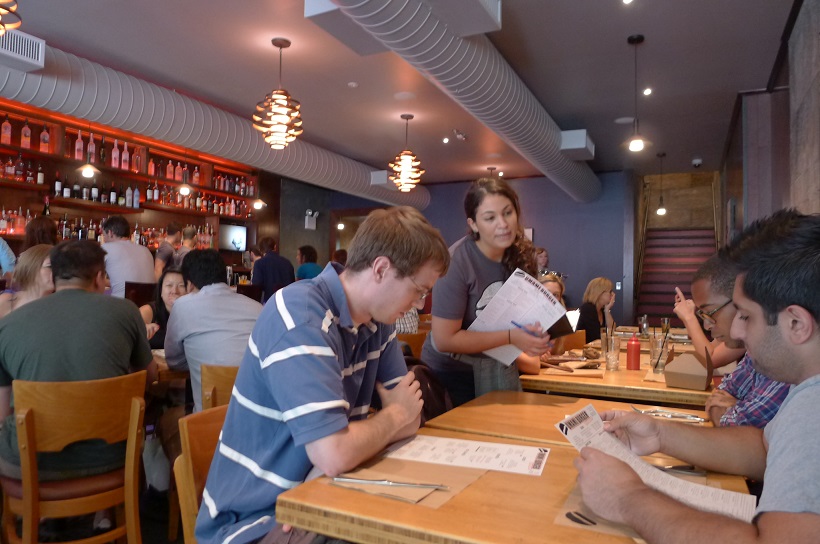 The waitress approached, wearing the same gray t-shirt as all the rest of the help. It said Umami Burger on the front and Eating Is Believing on the back. She leaned confidentially over the table, and asked the magic question, "Have you eaten at Umami Burger before?" "Yes," I lied, "in San Francisco." But my ploy didn't work and she launched into her boilerplate anyway: "The meat we serve in our burgers is ground from fresh steak. Our chef likes to cook it medium rare, but we can cook it any way you like. Our sauces and cheeses are all man made. We have a full bar, and our cocktails and beers are especially delicious?."

Ever since high school I've hated being lectured, and I started to zone out when my eye suddenly fixed on a beautiful thick burger passing by, its domed and burnished brioche bun branded with the letter U.

I asked for The Original, their signature burger, along with an order of "Thin Fries" – one of a list of accompaniments that included sweet potato fries, smushed [sic] potatoes, tempura onions rings, and the aforementioned fried pickles. These are oddly classed as Starters, and are supposed to arrive before the entrée. Of the three permutations of the thin fries, I went for the one called, simperingly, "Make 'Em Manly." Would they arrive covered with splooge? 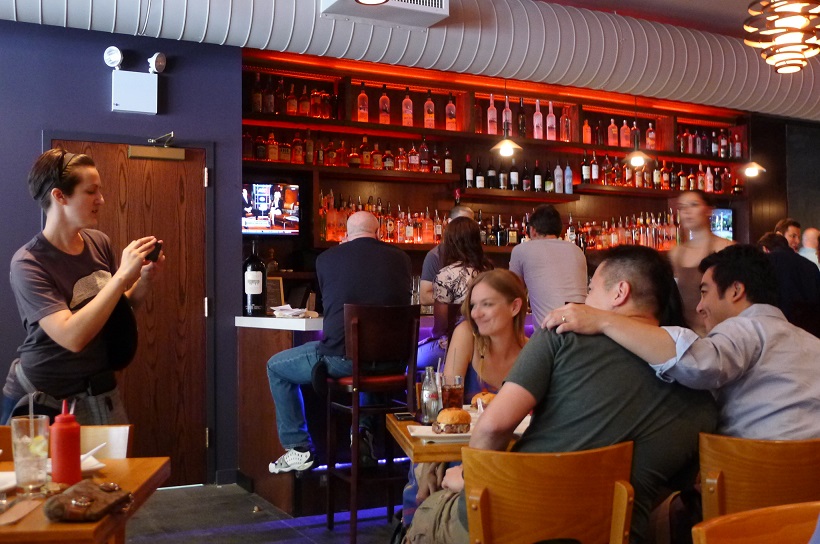 The signature burger comes topped with a parmesan crisp, confit tomato slice, and sautéed shiitake mushrooms, and the waitress had promised that all contained umami. ("That's a Japanese word," she sagely noted, "that means savory.") The parmesan crisp was quite good, nicely latticed and salty. The tomato slice was jaw-achingly sweet. And who knows about the mushrooms, since there were only two caps in total?

The burger and bun tasted great, the meat juicy and pink, and improved with the wonderful aioli. There was only one technical problem — the burger patty did not cohere, and had soon broken up into a sort of sloppy joe that the bun could not contain. I was reduced to picking up fragments of the tasty beef with my fingers. I think this is a fat problem — the patty needs more of it.

The fries, however, were the most perfect fries of the species known in Jersey as "disco fries." They were dotted with way-smoky chunks of bacon, fried onion tendrils crunchier than onion rings, and what might have been actual Cheez Whiz.