Can a Restaurant Location Be Cursed?

Share All sharing options for: Can a Restaurant Location Be Cursed?

Are certain restaurant properties plagued? Retail leasing specialists will tell you yes, rattling off addresses where a series of hapless establishments have prematurely folded, sometimes despite obvious merits. These locations often see a new tenant each year, or even more frequently, and stand empty for months at a time. Sometimes, a single restaurateur will be involved with several successive establishments, as if fishing around for a formula that works. Other times a place is the work of a naïve new owner who thinks it will be easy to make a profit on what looks like a great dining destination. Either way, the restaurant will end up going down in flames.

A case in point is 225 Varick Street, at the southwest corner of Clarkson and Seventh Avenue South. In the late 80s, it was home to Thomas Keller and Serge Raoul's Rakel. A decade ago it was a dying operation with a large square footage called Brothers Barbeque. It had previously done well when located around the corner on Houston Street in an old stable with a honkytonk vibe, but in the jump to a bigger, cleaner space, something was profoundly lost, and the 'cue never seemed quite as good. Brothers died a slow death – the patrons disappearing day by day – and finally expired in 2006. Yet the Yelp entry remains, as if the ghost still haunts the premises.

Next the property underwent a stretch as Charolais, later renamed Cote d'Or, a very ambitious restaurant with hearty fare from the Burgundy region of France. Its successor was Steak Frites, the Union Square French steakhouse and bistro, which didn't do well in this space and subsequently flew the coop – returning to its former location on West 16th, thereby saving its own life. Later it was Lucy Browne's, a self-described "wholesome American eatery," and then a Yankee seafood spot called Village Lobster and Crabhouse. If ever an address demonstrated the truth of cursed restaurant syndrome, 225 Varick Street does.

Current occupant is Clarkson, putting up a brave neon display visible for blocks, and a dining room stylishly open to Hudson River breezes – should they penetrate this far inland. A Real Estate Weekly headline dubbed the restaurant the "New Hot Spot for Trendy Hudson Square Crowd," and the restaurant sports a 40s travel theme as evidenced by Art Deco flourishes and zebra-skin wallpaper, said to have been inspired by the owner's time in Africa. The sprawling menu includes a suckling pig porchetta sandwich, smoked trout rillettes, charred octopus, and butter-poached lobster, with dinner entrees averaging $30. But is this formula brilliant enough to evade the Gastronomic Grim Reaper? Only time will tell.

So, can a reason be found for the many failures at this busy corner? Of the possible explanations, foremost among them is that, despite the encroachment of health clubs, discos, and advertising agencies, the immediate neighborhood, a strip once known as Printer's Row, remains profoundly working-class. A hardscrabble recreation center run by the city with a noisy outdoor pool lurks across the street, and a hub post office and other government buildings with lots of truck traffic are found in the vicinity. Indeed, the eateries in the neighborhood run to pizza parlors, falafel and taco joints, and a McDonald's Express, which seems in no danger of closing. Recently, an I-Hop emerged.

Though only a block from the 1 train stop at Houston, 229 Varick seems remote and uninviting to tourists, who probably make up half the patronage of restaurants in this part of the city. Despite being located in the West Village, the address partakes of none of that neighborhood's glamor. Tourists and New Yorkers visiting from other nabes are much more likely to disembark the train at Sheridan Square, one stop earlier, where restaurants have historically done well and there are quaint and quirky sculptures and architecture to be admired. So yes, though there's lots of foot traffic past 225 Varick Street by day, little of it probably wants to linger and eat at an elevated price point. And the corner's grittiness may make it scary to some in the evening. Certainly, other restaurants in less-than-inviting places have become wildly popular exploiting their obscure locations, cultivating a clubby insider atmosphere. 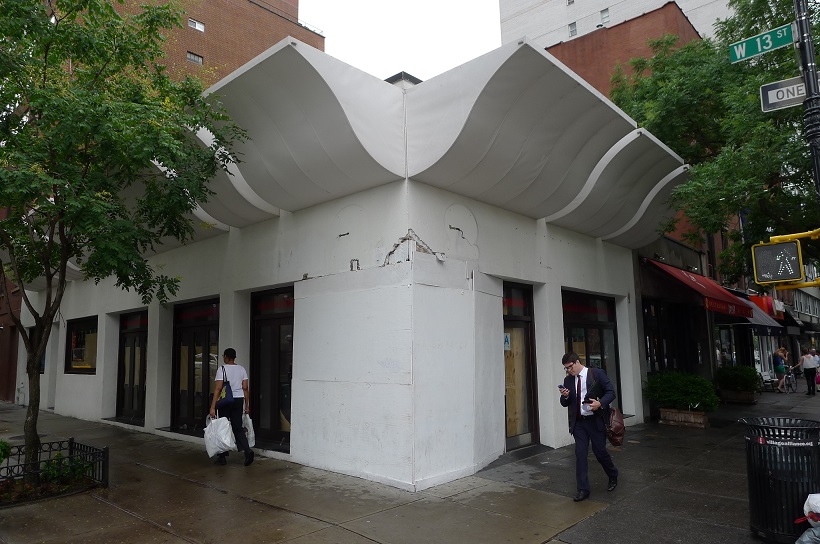 With Clarkson, the bright neon and diverse menu of contemporary food will hopefully help it find the well-heeled clientele it seeks. There are more examples of Greenwich Village restaurant properties you're more likely to see closed than open. Over the last four years 504 Sixth Avenue, a deep but narrow space on the southeast corner of Sixth Avenue and 13th Street, has been in quick succession Segafredo Zanetti Espresso, Rockography, Cosi, MaximoPino, Blitz! Brasserie, and Pint of No Return. Pint of No Return indeed!

Here, one assumes, high corner-store rents and what might be the least visually appealing commercial crossroads in Greenwich Village combine to bedevil restaurateurs. Demonstrating, as was the case at 225 Varick, that a high-traffic location doesn't necessarily mean a good one. Or could it be a number of sad coincidences that have caused place after place to fail, and maybe the right type of establishment might prevail? It's true that several of the recent occupants have flaunted a goofballish quality that didn't do them any good. The windows are currently papered up, awaiting the answer. 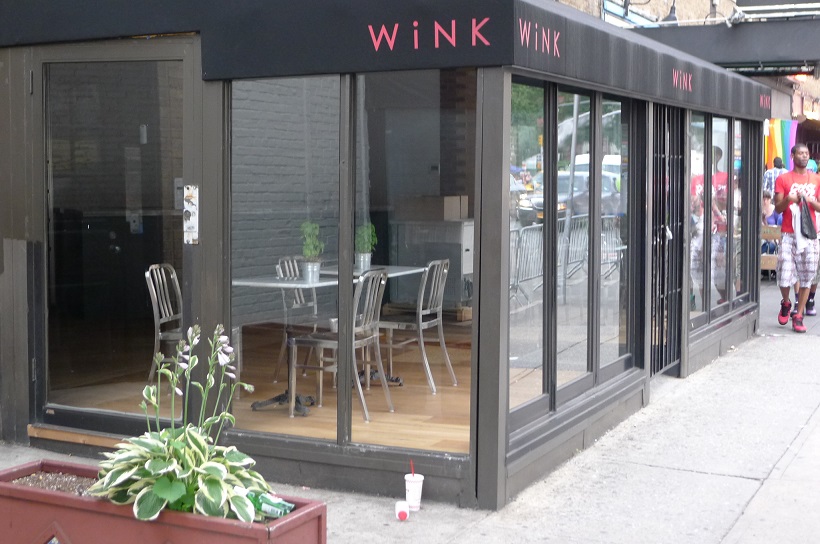 So too with 88 Seventh Avenue South, which has a rear entrance at 305 Bleecker Street. Now it's Wink, which has a café on one side and a retail clothing store on the other. Previously the address was occupied by The Famous Pink Teacup, Sweet Rhythm, and Sweet Basil, among others, with long empty stretches in between. Next door at 84 Seventh Avenue South, Leyla recently shuttered after a brief run and the storefront is again empty. Before that it was EightyFour on Seventh, Mixx, and Dinner is Ready. This in an area where restaurants such as Caliente Cab Company, Sushi Samba, and Jekyll & Hyde have persisted for decades. Certainly, located right at the iconic confluence of Bleecker and Seventh Avenue South, neither 88 nor 84 suffer the dodgy and dark dining neighborhood problem, but both spaces are oddly configured, with glassed-in porches thrust into the sidewalk to maximize a smallish square footage. Previous tenants may have erred in cultivating a late night, lounge-y, and alcohol-fueled vibe, with more colorful, brighter, and tourist-friendly restaurants all around them.

Ultimately, with so much competition in the restaurant industry, restaurateurs must be more careful than ever that a potential restaurant and its property will have a whole constellation of qualities that include curb appeal, pleasant layout, compelling interior design, a cash reserve large enough to get through fallow periods, and a menu (especially the price point) that appeals to customers of precisely the demographic that the area attracts. But even having all these ducks in a row, a restaurant may ultimately fail. Because restaurant locations really can be cursed.
· All Pieces by Robert Sietsema [~ENY~]
· All Coverage of Cursed Spaces [~ENY~]