Carlos Suarez & Wade Moises on the Birth of Rosemary's

Share All sharing options for: Carlos Suarez & Wade Moises on the Birth of Rosemary's 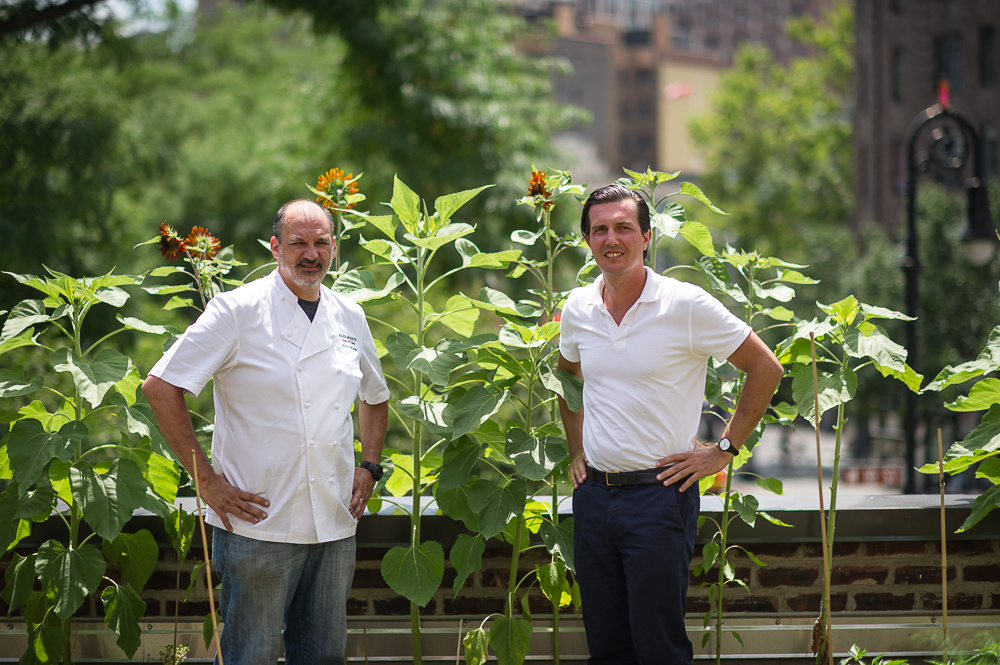 [Wade and Carlos by Daniel Krieger]

Rosemary's is that rare New York hot spot where the space is beautiful, the prices are low, and the food is terrific. It's a celebrity hangout, but also a neighborhood restaurant, and it's one of the best places for a first date in New York City. Restaurateur Carlos Saurez and chef Wade Moises had never worked together before opening Rosemary's, but something clicked right away. Now, after one year, Wade and Carlos are looking at how they can give their guests more options throughout the day, and how they can refine the overall experience of dining at Rosemary's. Here's a look back at the first year:
How did you meet each other?
Wade Moises, executive chef: I decided Eataly was not my bag. My buddy Alex Pilas, who's the chef over there, sat down with me one day and told me that when they were ready to open the Chicago Eataly that I would be taking over the Eataly store here as the executive chef. I thought about it for probably like a week or two, and then I got back to him and was like, "Look, dude, I really appreciate it. I've had a great time here. It's fun. But this is not what I want to do for the rest of my career." I thought I would feel like once I got to that level, I would be stuck there, like it would be very difficult to leave. I basically was like, "I think I'm gonna start looking now." I gave him plenty of notice, like, they knew when I started looking for anything. And then I let Mark [Ladner] know that I was looking around and he put me in contact with Carlos pretty shortly after I started looking.

Carlos, you struggled to get this space in the first place. How long was the build once you finally got in here?
Carlos Suarez, restaurateur: It was a year and a bit. So 15 months, maybe. Actual construction was August through May.

Was it smooth? Did you run into any problems?
Carlos: It was a big project so yeah, we ran into lots of problems. Even with a small project you run into problems, I'm sure. We hoped to have it open more like December/January. Opening late May was certainly not intended, but it worked out, I think, because we pulled the paper down on the windows to gorgeous sunshine and it really set a mood about the restaurant that seems to have continued since then. Had we opened in the winter, maybe it wouldn't have had that exciting feel right off the bat.

Wade: We also had the garden up and running when we opened, so that was another benefit. We were able to start using things from the garden pretty much immediately.

Did knowing that you have a garden up there influence how you wrote the menu?
Wade: A little bit. We didn't really base anything specifically on the garden because we had no idea how much we were going to get out of it. But we ended up doing pretty well with it last year.

You guys started with a really low price point and you've kept a really low price point. Was it a challenge putting together a menu with that in mind?
Wade: A little bit. It's more like a challenge in managing on the back-end as far as portion control and things like that. Day-to-day kitchen operations where, in order to use some products and make some dishes one way, you have to find a way to balance it out in different places. Obviously, things like focaccia and pasta always help, which allows us to make heavier protein dishes fall into balance without having to be in the same price point, themselves.

You guys have some of terrific bread. Who is the pastry chef here? Who is your bread baker?
Wade: Me, actually. My wife and I do about 90 percent of the gardening as well as 90 percent of the work in the kitchen. In the beginning, the bread recipe was mine and it was something I developed over a few years. I kind of had to tweak it here and there to get it to work the way we wanted it. I was doing a similar product, but it was in Arizona. And the same with the pasta recipes as well — those recipes started with me here and then went to Arizona and came back. There was a little bit of tweaking to do when you have that climate. It really affects things like dough, especially. We played with it a little bit and got it dialed in, so we do it here.

How was the opening?
Wade: It was rough for a number of reasons. The acceleration of the covers was difficult to deal with. We went from doing friends and family of 120, to doing 270 the first night we opened the door. By the end of the first night, we were out of everything. Then, we were in at 7 o'clock the next morning to start prepping for the next day, and repeating that routine for a few weeks.

Were you running out of dishes throughout the night?
Wade: We kept up for the most part, I think. There were a few things here and there.

Carlos: It wasn't anything that the guests were aware of. This is all behind-the-scenes. From the front of the house and guest perspectives, it was actually very smooth. Unfortunately, that wasn't necessarily the case for the back of the house, in that it wasn't well-managed at the door.

Did you have to tweak anything in terms of the menu or the overall food concept within the first month?
Wade: We tweaked quite a bit of the menu, actually. Mostly the production methods. We didn't change the menu, per se, but again, kind of more on the back-end where we changed our processes for things to kind of streamline them and to be able to keep up with the numbers. And, definitely, labor was a big part of it — increasing the number of people that we had in the kitchen. Instead of one guy making pasta or one part-time pasta maker, I have three full-time pasta makers and two part-time pasta makers. So five people working on it all day.

Carlos: Ultimately the Times review was very complimentary about the food. We felt that that was fair. He spent most of the time talking about the floor management, and not taking people's numbers. We obviously addressed that, but we're satisfied with the bulk of it, which is the guests' experience dining here beyond the front door.

Wade: I feel like they were all fairly good. The only one that I wasn't pleased with was Ryan Sutton's review. And I feel like it was a little skewed in how he approached what our price point was. If you read his article, we sounded like the most expensive place in town, when in reality, it's kind of the opposite.

Carlos: It's an $80 steak, but it's a steak for more than one person, and it's an outlier in a section of dishes for two. But the rest of the menu is actually extremely affordable. When you read things that kind of miss the mark like that, it's kind of a shame. But it's out of your control, so you move on.

I know you guys do the iPad text/call thing. Did you implement that right after the review?
Carlos: We certainly reached out to a few vendors following the review and it was a process. There were demos. We had three different options, and we ended up with one, and we're still working through it. The front door has proved to be the most challenging part of the front of the house, definitely.

What was the fall like? Did it drop off a little bit? Did people move on to the next place?
Carlos: It peaked in September, so, to a certain extent...yeah. It did peak in September. Sandy, I think, really took a bite out of ... 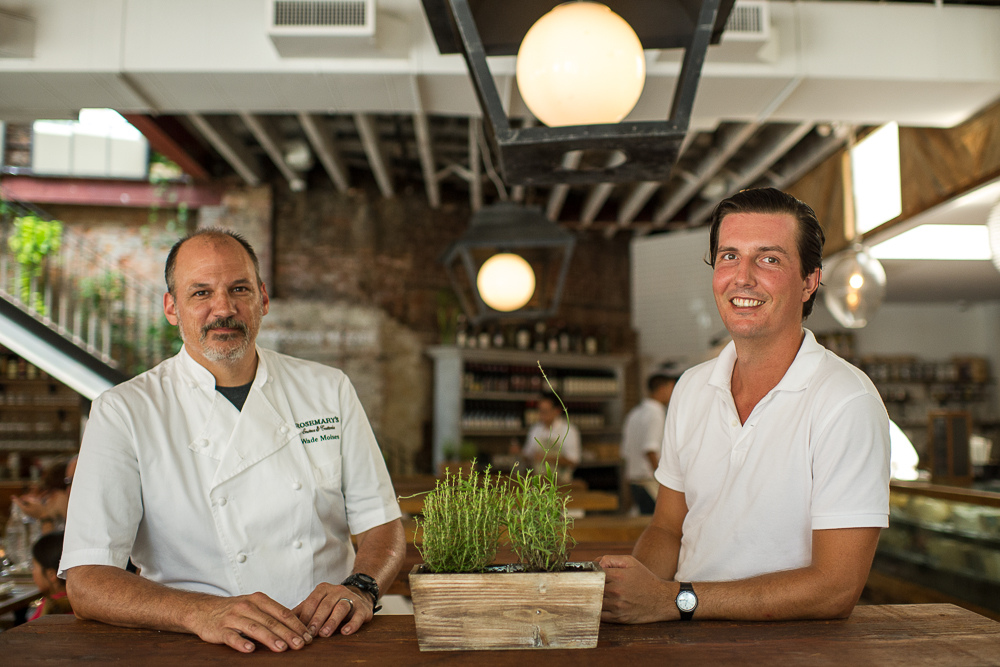 [Wade and Carlos by Daniel Krieger]

In the last year do you think that you developed a really strong neighborhood clientele, or has that been a challenge?
Carlos: I think that is the life blood of the restaurant. Breakfast still remains a little quieter than we'd expect, but brunch and dinner are packed with neighbors.

Wade: Even breakfast, it's not very busy, but you keep seeing faces every morning.
Is there any item on the menu you wish people ordered more?

Wade: For me, it's definitely the porchettina. It's one of my favorite dishes. It goes through its ups and downs. Some nights we sell 30, but most nights it's closer to like 10 or 15. I would like to see it sell 25 or 30 every night. I feel like it's unique. Like I said, it's one of my favorite dishes on the menu. I eat it very often. I taste it every day. It's one of those things that I wish would catch on, I suppose.

Carlos: Wells wrote about it being something that he saw on almost every table. He noticed it being very popular at that time.

Wade: Maybe it will come back. Hard to say. We sell, definitely on the meat end, I'd say our steak...the steak and the lamb juggle back and forth. There is a pretty even menu mix, pastas aside. Pastas, by far, crush everything. Since we've changed the cavatelli to our summer preparation of cavatelli with peas, that's now the best seller. Orecchiette with sausage is just under that, and the special kind of fluxes in between those two. On the protein side, fish, lamb, and steak are all pretty close to one another, with not a huge gap.

Do you want to do another Rosemary's? Like Rosemary's Café? Bring it to another neighborhood?
Carlos: Yeah. Something like that. It's been a lot of fun to work with Wade and I hope to keep doing it.

I don't know how seriously you talk about this stuff, but would you guys stay downtown?
Carlos: We've been pretty much focused on this guy. But, I think that to do a restaurant similar to this would have to be outside of this neighborhood because I don't know if it makes any sense to do it too close.

Does it feel like it's been a year?
Wade: [Laughs] It feels like a little bit longer to me, I think. It's just because it's been a very busy year, rolling out the many facets of the restaurant. I mean, when you are doing three meals a day, basically, and taking care of the garden and dealing with staffing issues and everything, it keeps you busy. Our level of business, which has been so fantastic, just keeps you on your toes.

Carlos: It's been a lot for one year.