Share All sharing options for: Sietsema's Ode to Chelsea Market

Retrofitted from a series of 22 interlocking and decrepit Nabisco factories that occupied an entire city block, Chelsea Market was created 16 years ago as a mecca for home cooks and an incubator for food-related businesses. These outfits would mount retail stores, but the leased spaces could also be used as manufacturing and warehousing facilities. The market was intended as a sort of foodie nirvana, and early tenants included Manhattan Fruit Exchange (a luxuriantly large and varied produce stand), Frank's (an upscale butcher shop related to a steakhouse), Amy's (an expanded version of a small Hell's Kitchen bakery), Ronnybrook Farm (an outlet for an upstate dairy), Green Table (a caterer, providing the only restaurant entered inside the complex), and Buon Italia (an Italian supermarket offering everything from aged balsamic vinegar to guanciale).

[All photos by Robert Sietsema]
But Chelsea Market had sprawling spaces that never found permanent tenants, though the upstairs floors were soon colonized by cable television channels like the Food Network, NY 1, and Oxygen; by Major League Baseball; and by Google itself, whose mothership lay across Ninth Avenue. Early on, there were several spaces on the serpentine ground floor that constituted a sort of revolving door for doomed food businesses, and the square footage was eventually turned to other uses, including temporary exhibitions and trade shows, clothing sample sales, a bookstore, a Moroccan import shop, a florist, cheap art and home furnishing stores, a boutique for babies, and – in the case of an anchor space — an Anthropologie. At one point, it looked like Chelsea Market was fated to become a conventional shopping center. 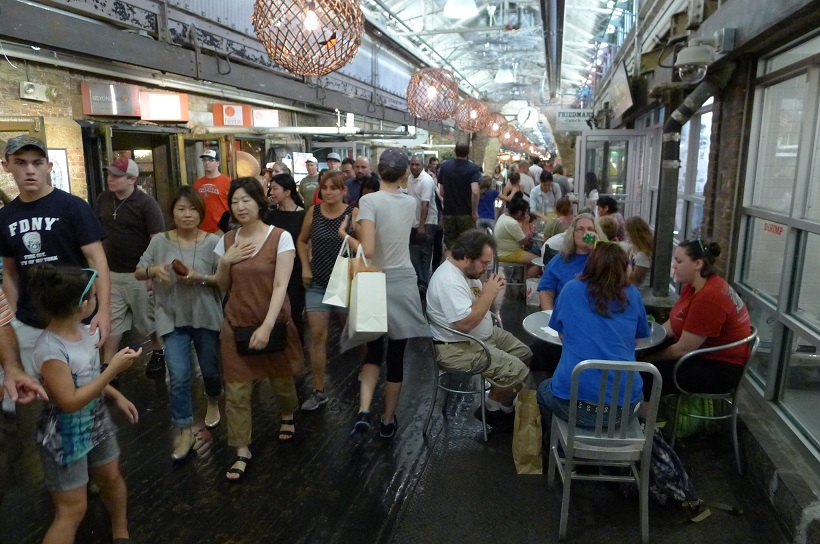 But gradually, another phenomenon was occurring. As the Age of Foodism blossomed in the mid-00s, many of the original foodie businesses began to emphasize the sale of prepared foods over raw materials. One of the first was Chelsea Thai, originally a grocery store. Soon the number of shelves dwindled and tables appeared, and the establishment gradually became mainly a café, with the small stock of remaining groceries serving as mere decor. Spaces that had once been intended to house single food-related businesses were subdivided into cheaper, smaller spaces – some gastronomic, some not. 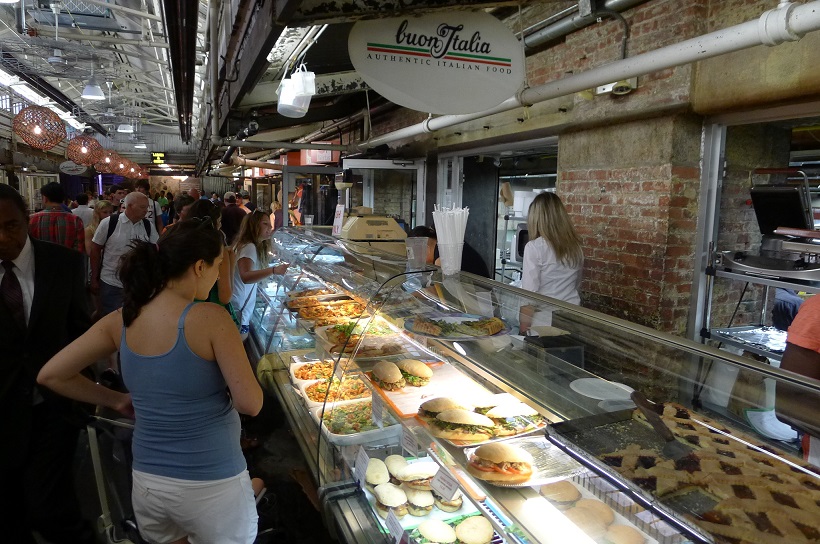 Meanwhile, the newly created stalls, as well as the full-blown stores, scrambled to increase their prepared-food output. Lucy's Whey, a locavore cheese stand, started selling toasted panini with great success, while Dickson's Farmstand Meats placed cold meat loaf sandwiches in their window, then hot dogs, and finally pre-roasted chickens. Bowery Kitchen Supply added a sandwich counter. Buon Italia rolled out a trio of prepared-food cases featuring pastas and fried cutlets, cash only, while Ronnybrook did away with 90 percent of their dairy offerings in favor of a circular lunch counter specializing in breakfasts. No more quark! 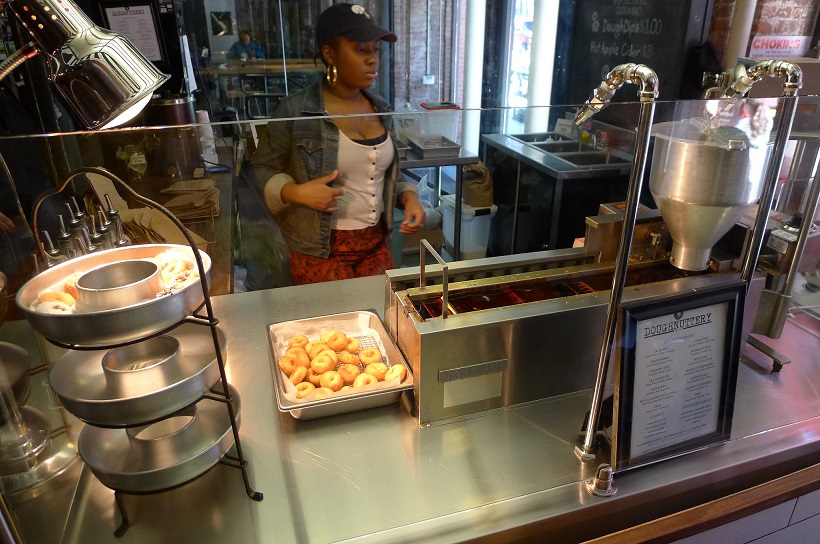 New micro-businesses sold Australian meat pies, sweet and savory crepes, ice pops, and unbelievably tiny donuts, about as big as a child's thumb and one dollar each. Snacking at Chelsea Market was becoming an increasingly expensive proposition. Last year, Amy's moved their baking operations to Long Island City, while retaining and expanding their retail sales space. And their bread never tasted quite as fresh as when it had been manufactured only a few feet away.

Tour buses started rolling up, and soon Chelsea Market was thronged with tourists and other assorted lunch seekers, whom the market readily accommodated by filling every spare square inch with tables, benches, and standing-room-only dining areas. Perambulation became difficult among the milling and seated hordes as the prepared food offerings expanded and you didn't have to walk more than 20 feet before encountering a cupcake.

When the property was first purchased in the early 90s with the aim of creating Chelsea Market, it was valued at $10 million. Taken over in 2011 by Georgia-based Jamestown Properties — who had heavily invested in the market since 2003 — the sticker price had gone up to around $800 million, with rents on the ground floor skyrocketing to an estimated $100 per square foot. In that context, who would be surprised that many of the spaces were turning to fast food to meet their rents? Jamestown also planned on adding a hotel and soaring office tower to the site — further exploiting its choice location right next to the High Line — but this intention has proved controversial with the neighbors.

In Chelsea Market's last few months, the fast-fooding has accelerated. Fish wholesaler Lobster Place has added a fish restaurant, Cull and Pistol, while implanting sushi counters, raw bars, and a steamed-lobster concession on their main floor, making the retail sale of fish seem like an afterthought. Cambodian sandwich shop Num Pang has opened a branch in part of the space vacated by Amy's Bakery, while a new vegan sushi counter called The Green Roll popped up in the first mini food court opened four years ago over by the bathrooms (there now aren't nearly enough of them), which also houses Jacques Torres, People's Pops, Lucy's Whey, and the tiny donut facility (Donuttery) mentioned earlier. Somewhat incongruously, Ruthy's Bakery now seems to share its enclosure with a makeshift falafel counter, which already seems doomed.

Meanwhile, the rest of the Amy's former square footage has become a second mini food court unto itself. Part of the space is leased to Los Tacos No. 1, a garishly painted counter offering a bare-bones list of quesadillas and tacos in the California style, and already wildly popular. Stranger perhaps is a fried-chicken stand opposite known as Hybird, owned by The Roots' drummer and deejay Questlove. Well, maybe fried chicken stand is an exaggeration, since only drumsticks are offered, at a whopping price of $4 plus tax apiece. Does this high price undermine the populist message of The Roots? You tell me. The rest of the small menu fills out with dumplings and cupcakes. Yes, while we're totally burned out on cupcakes, the modern tourist at Chelsea Market is just now turning on to them.

Nothing wrong with all this, of course, except mild disappointment that the number of places to buy raw materials of interest to the avid home cook has drastically declined. And the whole premises is beginning to seem like one of those places you warn your friends visiting the city from out of town to stay away from.