Share All sharing options for: The Story of Rakel, Thomas Keller's 1980s Restaurant

Before opening Per Se and The French Laundry, Thomas Keller was the chef/owner of a Hudson Square restaurant called Rakel. Although it's often remembered as a flop, Rakel was a critical hit when Keller was in the kitchen, and the restaurant helped launch a lot of great talent. Here's a quick look back at the history of Keller's 1980s restaurant Rakel, with remembrances from the people that worked and dined there:

The Road to Rakel: 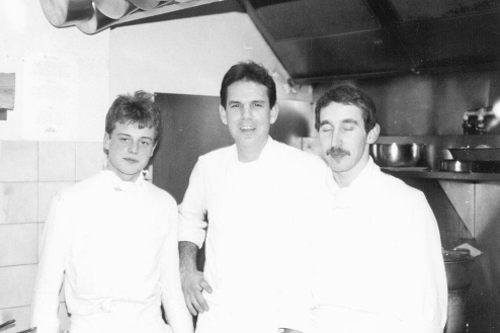 [Keller (center) during his early years as a chef]

Thomas Keller worked in a lot of kitchens before becoming the chef/owner of Rakel. Keller first entered the restaurant world as a line cook in a Rhode Island seafood restaurant in 1976. 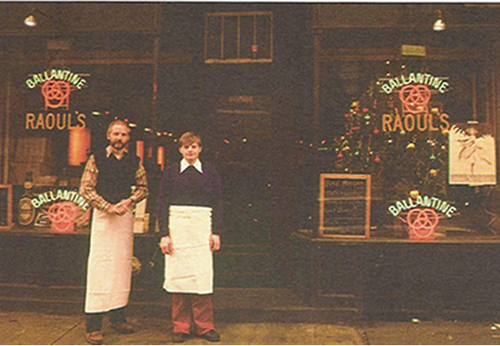 After stints cooking in his native Florida and the Catskills, Keller moved to New York, where he worked for Serge and Guy Raoul at their hip French bistro Raoul's in Soho.

[Keller and Boulud, young Keller]
Keller cooked for Christian Delouvrier at Maurice in the Parker Meridien, and he worked for a young Daniel Boulud at The Polo in the Westbury Hotel. Boulud once described Keller's work ethic in those days as, "boom, boom, get the job done, like clockwork."

Thomas decided to relocate to France in the early '80s to learn the classic cuisine in a string of highly acclaimed restaurants, including Guy Savoy and Le Pre Catelan. After receiving his French education, Keller landed at La Reserve in Midtown. In 1985, he was approached by his former boss, Serge Raoul, about opening a new restaurant downtown.

A Stage for Keller: 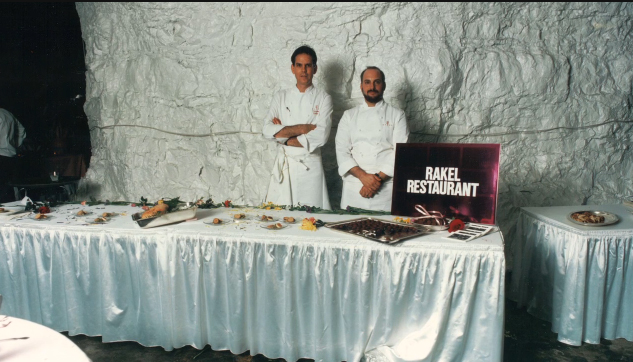 [The Rakel owners at a tasting event in the late 80s]

Rakel (a combination of Raoul and Keller) was a grand cafe serving modern French-American fare. Located on the corner of Varick and Clarkson streets (now home to Clarkson, and before that a string of failed restaurants), Rakel had a lofty post-modern dining room with large tables, wide white columns, and a cloud mural on the ceiling. One corner of the space also had a giant movie screen showing "closed circuit video of street traffic." Rakel opened in December 1986, with a menu that included things like "cappuccino" of mushroom consomme, roasted monkfish with garlic chips, and duck breast with green lentils and bacon.

Mr. Keller has the sensitivity of a sculptor when it comes to textures, for his dishes are often animated with crunches here and crackles there that catch the palate off guard. This can best be seen in the terrific appetizer of calf sweetbreads. Firm, fresh and sauteed to golden perfection, the sweetbreads are drizzled with a bright sesame vinaigrette and set over a tangle of hair-thin deep-fried leeks. Another winning combination is the light and greaselessly fried oysters paired with leeks steeped in cream and dabbed with a sharp wasabi-mustard butter.


He wrote that the service was energetic but scattered, and the lighting needed some work. He gave Rakel two stars, and noted: "Rakel's aim is indeed ambitious, and even at this early stage its percentage of bull's-eyes merits enthusiastic recommendation."

Although Ms. Gael Greene never filed a formal review for New York, she mentioned Rakel in her roundup of favorite dishes from 1989. Her pick: "Breast of lamb, crispy as confit, with peas, beans, corn, and bits of carrot in thyme-touched sauce." And former Times critic Mimi Sheraton tells Eater: "I can say from memory, that it was very innovative for its time with its non-traditional combinations and presentations and I recall liking it a lot." 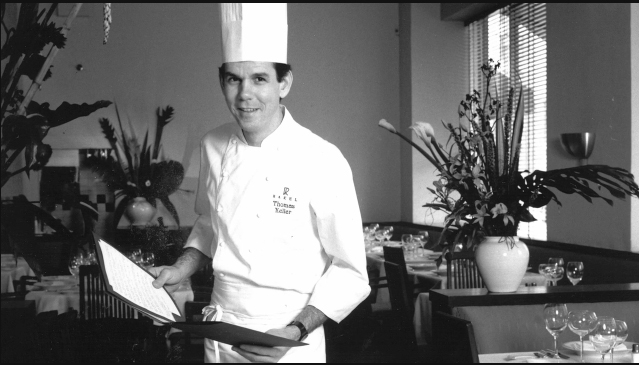 [Keller in the early days of Rakel]

In his book, Think Like a Chef, Tom Colicchio recalls his days as a sous chef at Rakel: "I was encouraged to come up with new dishes in the middle of service. Run with it. There was a willingness at Rakel to move away from conventions, to see where our imaginations and techniques could take us." 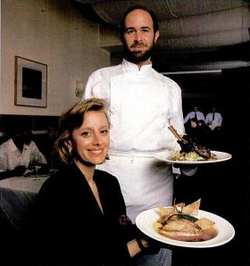 Before she opened Alison on Dominick, Alison Price was the general manager of Rakel. Eater reached out to the restaurateur for her remembrances of the restaurant:

I loved Rakel. It was my first GM job. I had been working at Gotham as assistant manager and events, which I also loved, and wasn't looking to leave. Yet when the opportunity arose, I grabbed it.

Working with Thomas truly gave me the confidence and inspiration and direction to open Alison on Dominick. His attention and dedication to detail will forever be a part of me.

So many memories. His wonderful insistance that the entire staff sit together at family meal and discuss food and wine. We were a family. I learned how to craft a wine list, many memories tasting with suppliers standing at the bar, learning the language of wine. Thomas generously shared his knowledge.

One humorous/silly note (and forgive me Thomas, you are not silly....): He liked to see the comings and goings on at the front podium. The way Rakel was designed, he couldn't quite see (the dining room was elevated, not the podium), even as tall as he is. So from time to time, he would step onto a wine crate so he could see the activity up front.

We had such good guests there, many of whom have followed me to Alison Eighteen. To this day, there are many times I think. "Would Thomas do this?" His standard of excellence will forever be something to aspire to. [Alison with Tom Valenti in 1991] 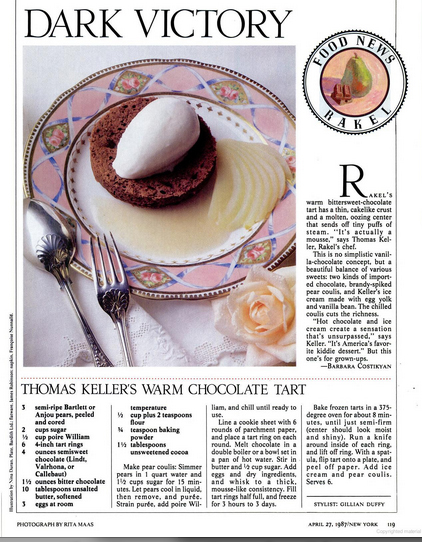 Ken Addington, who is now the chef/co-owner of Five Leaves and Night & Weekends, started his culinary career at Rakel. Here's Ken on his stint in the kitchen:

I interned there for almost a year in high school. I was about 15 or 16 and more interested in girls and music, so I don't like to play that time up too much. But it was a good base education, and I got to meet and work with some great cooks.

My worst memory was my first day, having never set foot in a professional kitchen before, being handed a case of very dirty, stem and root-on spinach and being told to clean it. To my young mind cleaning was associated with hot water.

One of my favorite memories was of Chef coming into the kitchen in the early afternoon eating a slice of pizza. I couldn't understand at the time why he would be getting down with something so pedestrian when he had a giant staff at his command that would gladly prepare him anything he could possibly want from the grand list of ingredients in the house. Now I get it.

Andrew Zimmern also worked as a line cook in the early days of Rakel. In his Munchies video, Zimmern notes:

I did a year at Rakel with Thomas, and that was great. But he and a couple other guys found me in the liquor room drunk from the night before, passed out on the floor. When he saw me for the first time — I don't know it was like 10 years ago, I was helping a friend — he literally walked across the room, gave me a hug and whispered in my ear, "I thought you were dead."

Moving On, Moving Out: 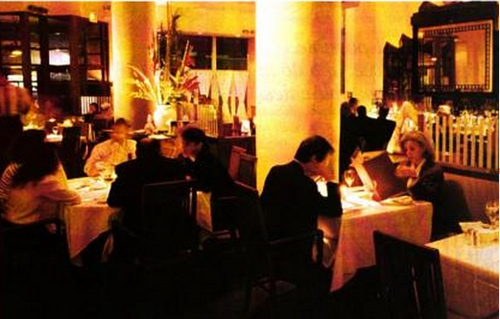 Keller left Rakel in January of 1990 after Raoul decided to switch up the concept. In a Diner's Journal post from that winter, Bryan Miller noted that Raoul planned to "lower Rakel's prices, simplify the cuisine, and rename the restaurant Le Select." Raoul actually renamed the restaurant Cafe Rakel, and installed Stephen Kalt, a veteran of Le Cirque and Huberts, as its chef. In the aftermath of the financial downturn, this was not an uncommon move for a New York restaurant like Rakel. In May of 1990, Bryan Miller wrote: "While there has been no mass closing of major Manhattan restaurants in the last six months, many establishments have lowered prices, scaled back menus, and reduced staff to cope with the shrinking patronage of restaurants, particularly among upscale establishments."

Keller left New York to work as the executive chef at Checkers in Los Angeles and start an olive oil business. The bistro iteration of Rakel received one star from the Times in 1990, then it turned into Raoul's Brasserie, then Raoul's on Varick. In an unusual twist, Keller returned to his old boss in 1994 to consult on a reboot of Rakel in the same space with Swiss chef Claude Solliard in the kitchen. The reunion didn't last long — by the end of 1994, Keller was back in Napa negotiating the purchase of the French Laundry with a team of 50 investors. Rakel did not make it to the new millenium, but Keller returned to New York in 2003 to open The French Laundry's fine dining counterpart, Per Se at the Time Warner Center. 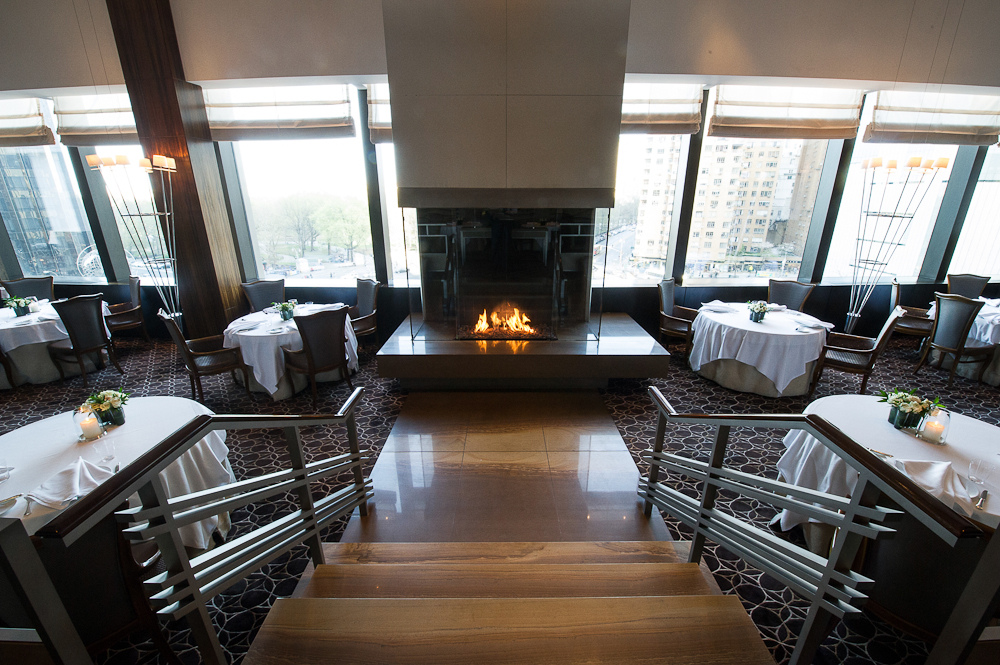 [Per Se by Krieger]

In 1996, Keller looked back on his experience at Rakel:

I learned it didn't matter how good a cook you are...It was about organization, management. The management was not as strong as it should have been. The restaurant was undercapitalized, and we didn't capitalize on great reviews. Financially it wasn't working, and Serge Raoul wanted to run Rakel like Raoul's, like a bistro. I didn't want to compromise what I was cooking and realized I would have to make a change.

It was heartbreaking, confusing. It was torture. I was sad, depressed, embarrassed. Now I feel it was a great accomplishment to gain that experience at that age.

He was 34 when he left New York for California, without a restaurant to his name. Now, at 57, Keller has a dining empire that includes two of the country's most respected restaurants.
· All Coverage of Thomas Keller [~ENY~]
Foursquare