Chris Bradley is the executive chef at Untitled, Danny Meyer's cafe and restaurant in the Whitney Museum. Untitled pays homage to the classic Manhattan coffee shop, and Bradley, a vet of places like Gramercy Tavern and Cafe Boulud, serves a menu that looks like a more refined version of the one at your local greasy spoon. As part of Greasy Spoons Week, Eater sat down with Chef Bradley to talk about what it takes to update a classic. Here he is on the dos and don'ts of making fancy diner food, his favorite greasy spoons, and plans for the restaurant's eventual move downtown, which is slated to happen mid-2015:

At Untitled you've translated the classic, iconic New York coffee shop into something more upscale. What were the challenges of doing that?
I think the biggest challenge I always saw was that you're dealing with something, when it's classic, that people have very set ideas about. So, 90 percent of people will love it, and there will be 10 percent of people who just think it's an abomination. You've taken that element that they feel is what makes it classic, and you've torn it apart. Like, early on we were making sauce for the egg creams, and man, the backlash from that! I mean, I don't think anyone liked our special sauce. So we've gone strictly with just the Fox's U-Bet, which is the classic flavor. But, we thought ours tasted delicious, it just didn't...people who love egg creams love that classic flavor, and toying with that was just off-limits.

I remember reading that New Yorker Talk of the Town piece about testing the two chocolate sauces side-by-side.
Right, and that was really exciting to get to play with, but you found out quickly that there are some pieces you just don't touch. So for us, it was more, you know, not changing the flavors but changing the technique. Changing the sourcing. Instead of buying bulk eggs, getting the small farmers, getting things in fresher, not having a menu that's so massive that you basically got all your ingredients packed into a freezer that you're just pulling out and sort of heating up and serving. Taking some of the same ideas that we would do, say at Gramercy Tavern, and applying them to here, to the greasy spoon diner idea.

So how did you go about paring down that menu?
It really was trying to hit the broad spectrum of things, so we have things that were healthy, so we've got granola and yogurt, but then also hitting the classics: omelets, soups, salads, sandwiches, making sure we covered all those bases. You know, where we'll have something that's very classic like a chef's salad with chopped egg, Thousand Island dressing, and then also having something that's very upscale—kale salad with toasted pumpkin seeds and yogurt dressings and things like that. So again, it's finding a balance between, "Where can we stretch the limits? Where can we do things that aren't necessarily diner but fit the model?" And, "Where do we need to have things that are a Reuben sandwich, a classic tuna melt, and the soup and sandwich combo that we're doing now that's been a big hit?"

Where there any particular places that you looked to for inspiration? Either to say, "I'm going to do this dish from there." Or, "I want to model this style from this place?"
You know, being in Brooklyn we went to Tom's quite frequently. Not for specific dishes—I mean, their pancakes are incredible there. I like to think mine might be better, but then I'm partial. It was more, "How did they take volume like that? And quick service like that? And people are willing to wait 30 minutes to get in, an hour to get in. And what is it?" They do small things, like giving out the oranges and the cookies, and serving drinks. So we tried to look at those guys specifically for, "How do we get hospitality into such a small, quick service setting?" 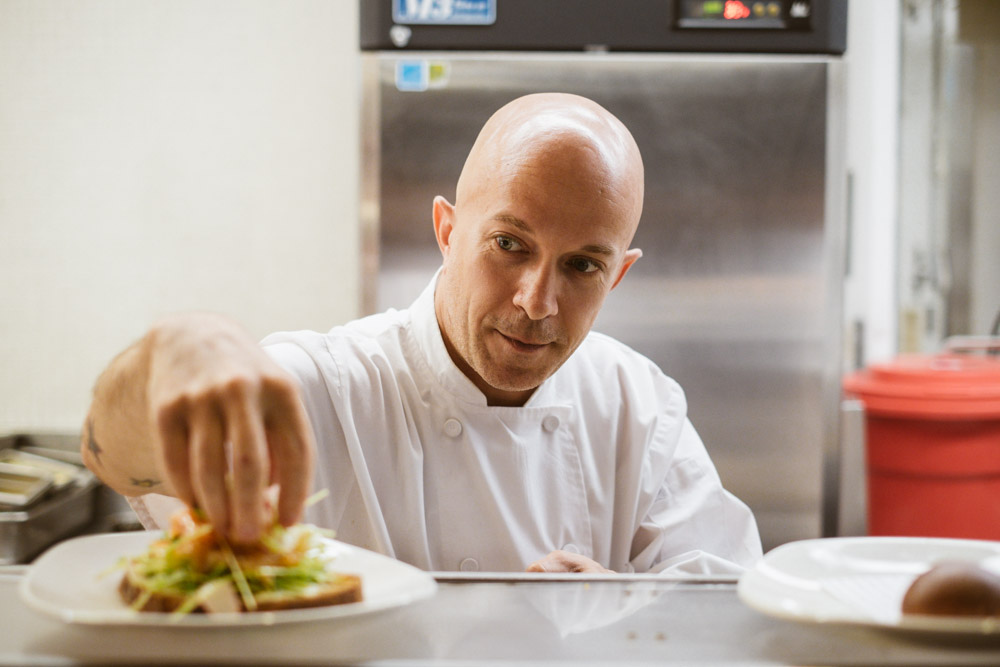 Yeah, I'm always super impressed by their service.
Yeah, my girlfriend lives basically upstairs and I'm always like, "Really?" There's a wait this early every day it seems like.

But they give you pancakes and bacon while you wait.
Exactly, exactly.

Did you talk to those guys at all?
We didn't really, we just went over and had breakfast on several different days — on a weekday to see what it was like, and we sat out there on a Saturday to see what it was like...this was before the restaurant was open, so we had time to hang out. But yeah, we just wanted to see what the vibe was, how the staff handled it, and how the guests reacted to it. You know, what was working for them, where were the elements we thought we could improve on. We obviously didn't have the power to pass free things out in the lobby here, but, you know our approach to people is sort of based on that idea.

Is there any specific dish that you said "We are definitely going to do that." Or just any favorites of yours?
You know I insisted upon my Southern roots, on having a grits-based dish. So we've always had a poached egg with grits and greens on the menu — we've added pork belly to it for this new iteration. And one thing Danny [Meyer] felt like we needed was a soft scrambled egg on toast, which I think is something everybody — adults and children — love. So again, instead of it being like toasted white or wheat, we found a great sourdough from a small baker, Bien Cuit. Again, better farm fresh eggs, and our addition was putting some goat cheese and cheddar cheese into it to really bring the flavors all up, brighten it up, finish it with some chopped chives.

Do you have any favorite diners besides Tom's? Anything in Manhattan?
You know, I lived in this neighborhood actually for the first two years I was here in Manhattan and I was working at Cafe Boulud, and there was the Three Star Diner. You know, I think the best thing about a diner is that it has to be close to your place, because you either want it first thing in the morning or as the very last thing at night. So, I know there were days where I was going to that place at three in the morning getting right out of work, and other days when I was swinging by at seven in the morning. Again, classic, classic. It's got the bottles of chianti with the wicker basket on the bottom of it, but they're open 24-7. I'm pretty sure I've had beer in there at six in the morning after some particularly long nights. It's more just the atmosphere, it's lively. It's a Greek family that runs it, and you can tell they're all related because they shout at each other from the kitchen out into the dining room. And they hustle you in, the check hits the table almost as soon as you order, but everything hits the table hot, quick and delicious. So that's when a diner really nails it — when it can make that happen.

Do you have any go-to dishes, if you're going to whatever diner late at night or early morning?
I'm a corned beef hash with a sunny side up egg man, when I'm feeling like a fat kid.

Is there anything besides the egg cream that you feel like, "I'm not gonna touch that, we can't improve on it?"
No, I think technique-wise there's always room for improvements. We haven't found any backlash other than the egg cream.

What was the worst thing someone said about the egg cream? Were people really vocal about it?
No, it was more just sending it back and saying they didn't like it, something was wrong with it. So we had the Fox's U-Bet that we kept. We just thought "Oh, everyone's gonna love the flavor of ours," and they would say, "No, this doesn't taste right, there's something wrong about it." And some people could put their finger on it and nail it, and other people were just like, "Something's wrong with this, it's not the same." I even played with the recipe just a little bit, tried to make it...I don't know what the flavor is, but I tried to make it just slightly more acidic and chalky, as opposed to being that smooth, rich, sort of leather and berry, which I thought was going to be great for all of those elements. Other than that, we haven't had any real backlash. I imagine if I took, say, tuna salad and started grilling it and chopping it up, that sort of thing, or poaching it in olive oil, you know, tuna loin. Again, it might taste delicious, but people love canned tuna. So we found a great producer out west who pole fishes their tuna, so it's a much smaller operation, a much safer, sustainable venture.

You guys are moving downtown eventually. Have you started thinking more in detail about that at all yet?
You know, a lot of it's still up in the air, but we've got two restaurants to play with. The one upstairs is going to be solely accessible via the museum, so most likely a lot of the elements you see here are going to make their way downtown in the upstairs restaurant. And then the downstairs restaurant is still to be determined. We're saying at least a year and a half to two years, we think, before that will open, so we're going to wait and see how things play. That neighborhood is changing so quickly, we've got a feeling it's going to skew more residential and less clubby in the future, so we're trying to see how that all plays out before we make any firm decisions. We've got some basic design elements, and the kitchens are pretty much laid out already, so those things are in place. But the final concept is still being kicked around between the various constituencies. 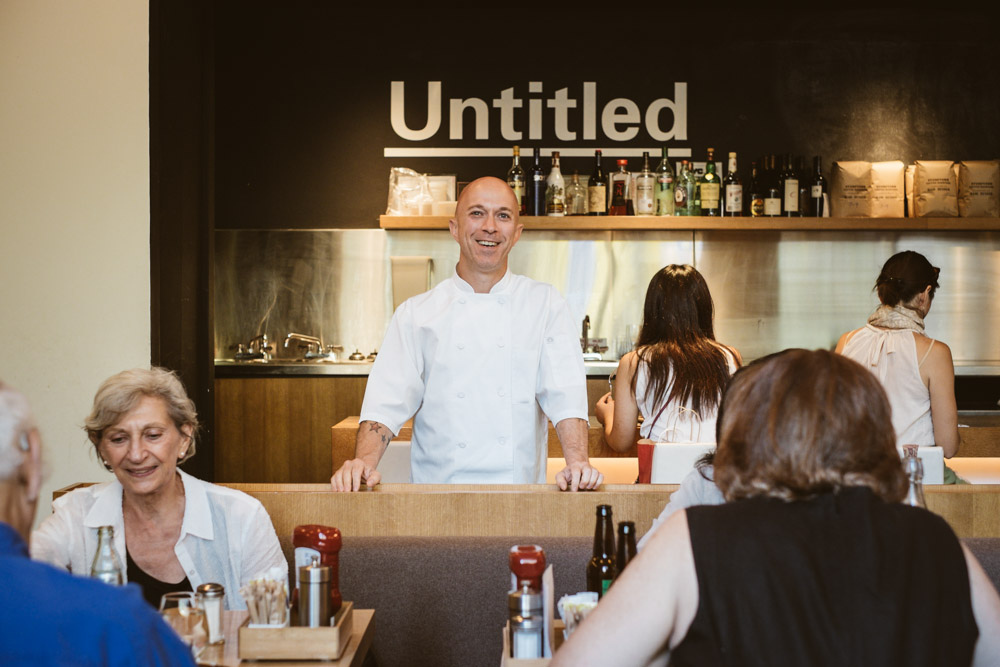 So is there anything in particular you're excited about trying, or you're thinking about doing?
Well, we've got a rotisserie set. It's an open kitchen, so there's a rotisserie that's set as one of the main focal points of the open kitchen, so getting to play with those, roasting some meats, is gonna be really what I'm looking at in the next couple of years.