Greetings from Westway, the family-owned 24-hour diner in Hell's Kitchen where, as legend has it, Jerry Seinfeld and Larry David first talked about writing a show called Seinfeld. For the next 24 hours, this will be the home base for Greasy Spoons Week. That's right, Eater will be blogging from Westway from now till noon tomorrow. During this time, we'll be chronicling the general goings on at this iconic New York diner, and the people that make it tick. Expect cameos from industry heavyweights, as well as a few other fun surprises.

As Robert Simonson noted earlier this week, Westway is a "longtime actor favorite" and "a refuge of tourists who don't feel the need to eat fancy (or pricey) before seeing a Broadway show." Do you have any favorite memories from this diner? Please send them into the tipline, and we will share them with the rest of the class. And if you happen to be in the neighborhood, please do stop by — coffee's on us.

Here's a glimpse at what's going on at Westway right now:

That's all for installment number one. Follow the next six hours of the live blog over here (spoiler: fries are on Eater).

6 pm: Ardesia's Mandy Oser is here to have a lemonade pre dinner rush. Her favorite diner: Edie's Luncheonette in Little Silver, NJ. Her order: "Some kind of scrambled egg and whole wheat toast, but always the waffle fries."

The first thing I ever got paid to write was the Gotham Bar & Grill cookbook. I came into the project late. The recipe testing had been done, I just did the text. It ended the weekend before the book was due with me spending the weekend at Alfred Portale's apartment in the East 50s. And we were working until we couldn't work anymore and then we would crash and get up. So on Saturday morning we were bleary eyed exhausted. I was used to all nighters, so we went within a block or two of there on 2nd Ave. I went to a diner and we this waitress, I think she was Russian. She was pretty young, and she was the absolute funniest diner watiress in the history of the wold. We were like who is this person, where did she come from? 5:37: Westway staffer: Waiter Sergio started here four months ago. He worked at another diner but moved here after taking a vacation and deciding he wanted a fresh start. He lives in Forrest Hills. He says he likes this job better because the money is so good -- all the shifts, whether it's 11 am - 8 pm (his shift today) or the night shirt or 6 am - 3 pm. His favorite regular: Isaac Mizrahi. 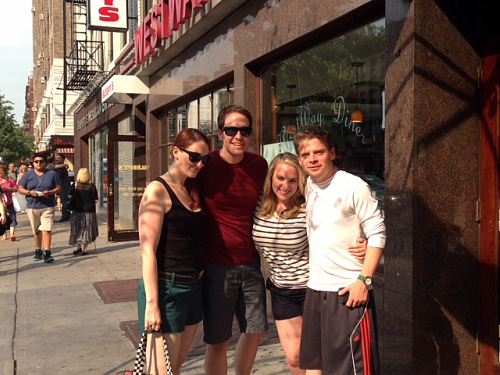 Name: Tori, Nick, Megan, and Chuck
Neighborhood: All over, from East Village to Brooklyn
Why They Came to Westway Today: They're performing in the New York Musical Theatre Festival, and are on a short break from rehearsal. They wanted a quick, but substantial meal before they headed back, so they ventured over to Westway.
What They Ate: Two turkey burgers, the chicken fingers, and a grilled cheese.

5:15: Friedman is also steamrolling through the crossword. Word on a dollar: God. Fish story: Tale.

5:11: Author Andrew Friedman is here, having an iced coffee. His standard diner order: "It's usually corned beef hash, poached egg, white toast dry, and vanilla shake. That was my middle of the night order too. Now I'll do that for breakfast or lunch but I've had that at 3, 3:30 in the morning a million times." 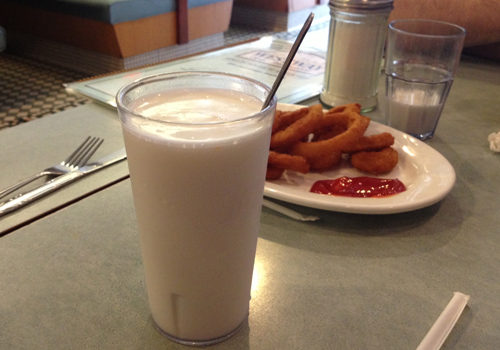 4:47: Dan Saltzstein, a travel editor at the Times stops by for an egg cream and tells us about his favorite diner meal: "14 years ago I moved to Astoria and it was just one friend and me and it was July 5. It was the hottest day of the year, 98 degrees and super humid. We moved. My friend Josh and I moved my entire apartment. It was a horrible experience. At the end of the day all we wanted was Greek diner food. There was a Greek diner around the corner on Steinway Street. It was the most refreshing meal after the worst day of my life." The order?: "I'm a chicken cutlet guy so I'll often get chicken cutlet with provolone and Russian dressing on rye and an egg cream. I think now that diner's a yoga studio."

4:37: Over halfway through hour five, here's another look at the dessert case. The brownies seem to be a popular item: 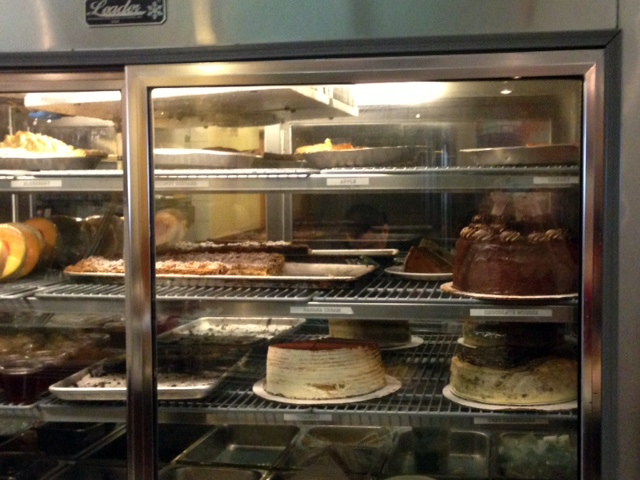 4:31: We brought in some reinforcements from Birdbath in the East Village to get the staff here through the rest of their shifts. 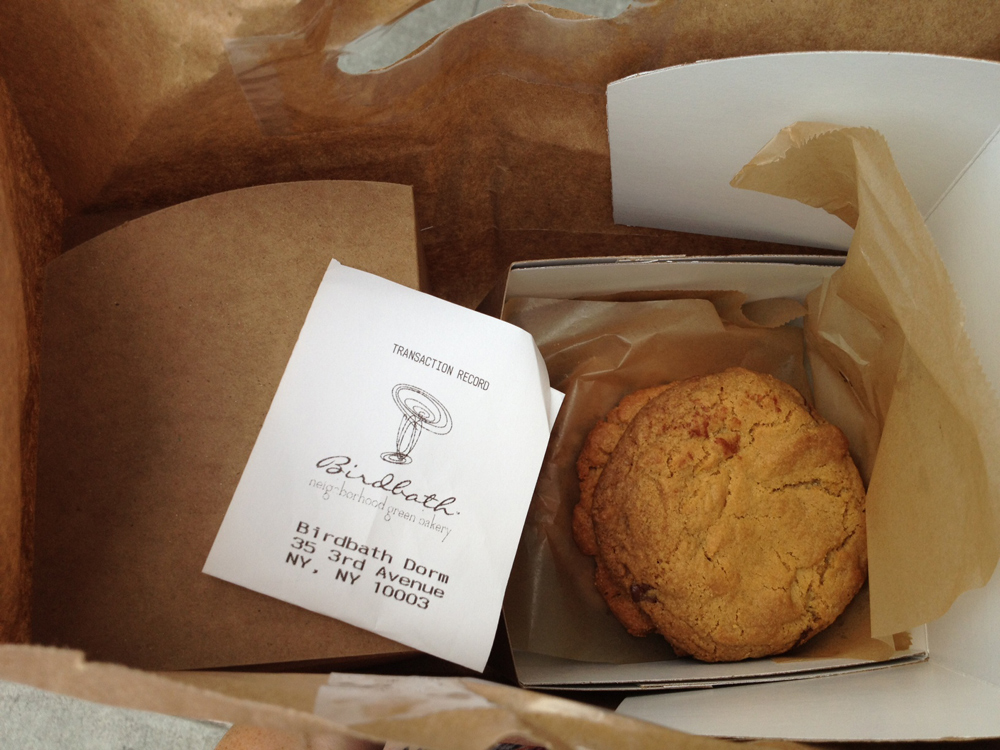 4:27: Some Westway facts: the Westway opened in 1988. The most popular menu items, according to our waiter Sergio, are the burgers (though he really likes the salads). The full bar is open from 9 am - 3 am, and has everything from scotch on the rocks to frozen daiquiris, but will also serve virgin cocktails. 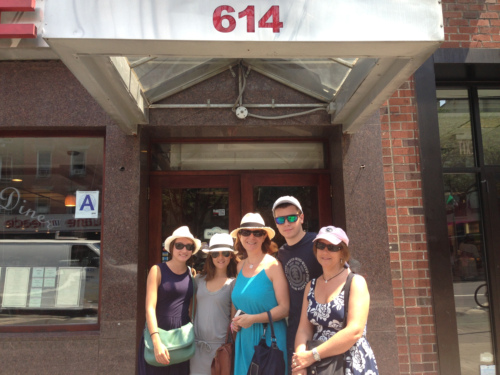 Name: Lauren
Neighborhood: Harlem
Why They Came to Westway Today: Lauren is a neighborhood tour guide, and often walks by Westway on her Hell's Kitchen tours. Her family is visiting her from France and requested something "very American" for lunch. Lauren's been in a few times for lunch and liked it, so she brought them here.
What They Ate: They ordered the burger, a club sandwich, the fried calamari, and the club salad. 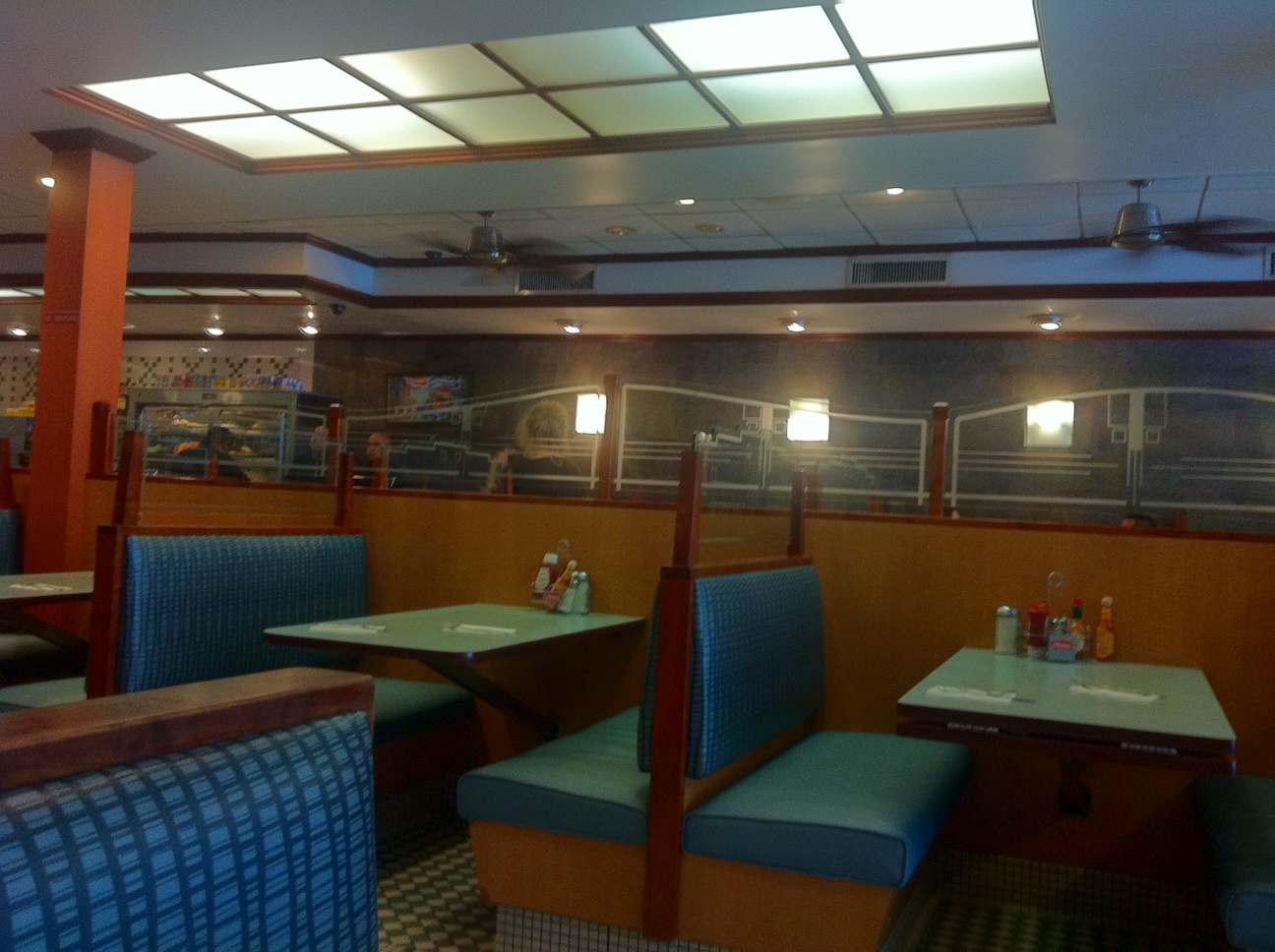 3:45: It is completely dead inside the Westway now. Employees are eating staff meal, and a family of three is finishing a late lunch of chicken wings, burgers, and shakes right now.

3:30: Diner Dossier
All throughout the 24 hour liveblog, Eater will be asking customers why they came to Westway, what they ordered, and where they are from. Welcome to Diner Dossier: 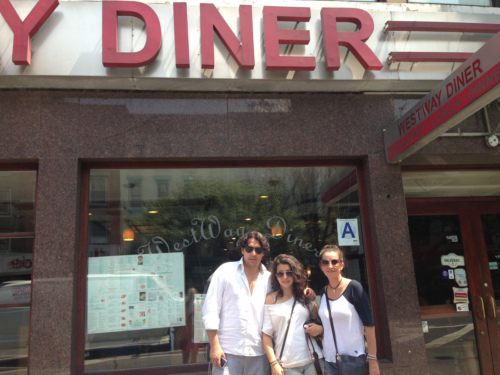 Names: Alex, Ali, and Angie
Hometown: Mexico City
Why They Came to Westway Today: This is their first trip to New York. They were walking around the pier by the Intrepid Museum. They stopped someone and asked where they should go to eat Greek food for lunch, and they were told to come to Westway. When they saw the menu, they were a little confused, but they liked the Greek options.
What They Ordered: Gyro platter, the chicken souvlaki sandwich, and a smoothie. Rave reviews for the smoothie. 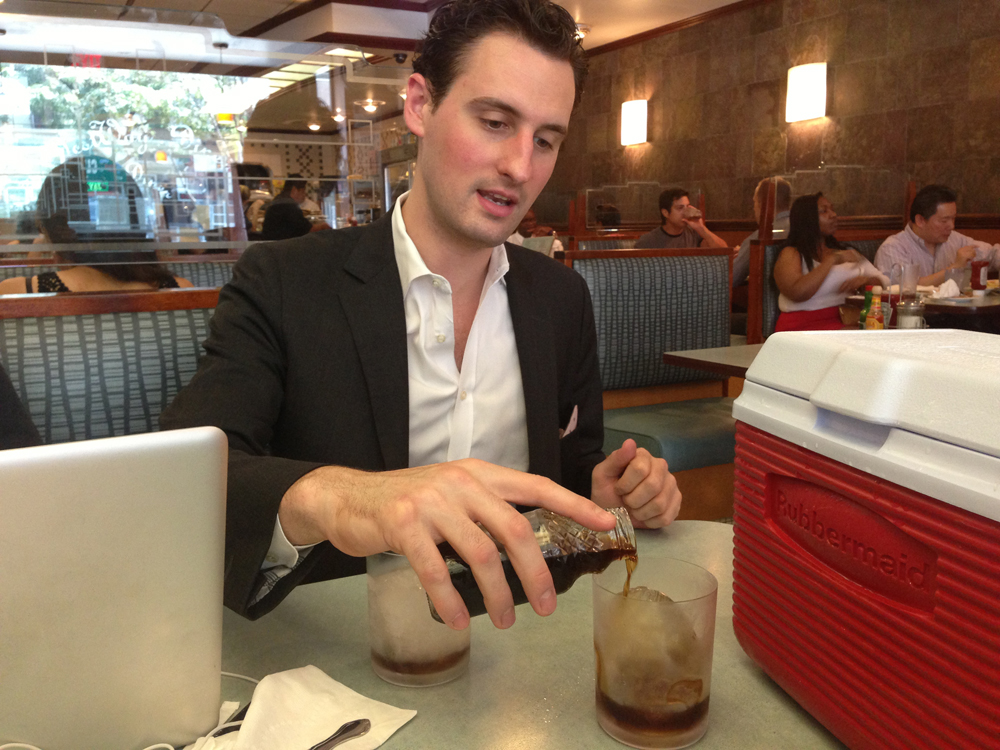 3:10 Betony GM Eamon Rockey just stopped by with an Igloo cooler full of highball glasses, spherical ice cubes, and a bottle of his crazy delicious boozy iced coffee. Eamon tells Eater that he's basically working straight through the summer, no vacation, but he might take a night off to try The Elm soon. Eamon put aside a bottle of Champers for his friend, Paul. Class act, that guy.

2:50: Working through the New York Times crossword puzzle: What's the answer to 63 Across: They're sweeter than sweet potatoes (4 letters)?

2:26: Never mind. Smoke smell is totally gone. Someone probably held the door open for a bit. 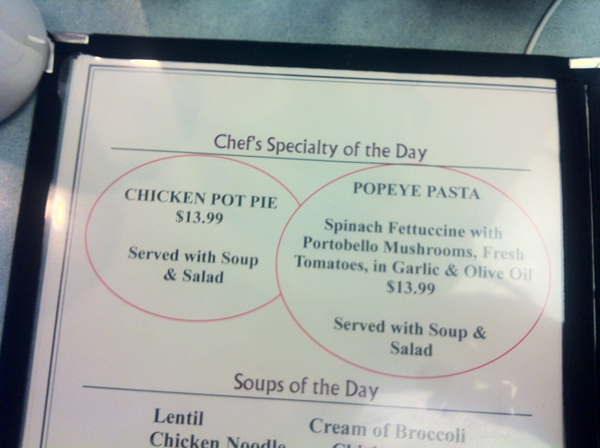 2:12: Lunch rush has died down a bit. Room is maybe 75 percent full, but people have stopped coming in.

2:01: Westway has absolutely no "diner smell." Smells like...nothing at all. 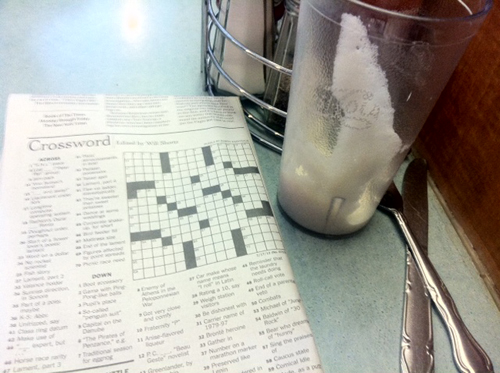 1:40: Coffee is textbook diner coffee. Milkshakes are better than most diner milkshakes.

1:30: New York State Senator Brad Hoylman, a longtime Eater fan, is here. He loves the Westway. He says that this is where "a lot of political organizing" happens. Apparently there are "a lot of unions nearby." Here's Brad with two members of his staff: 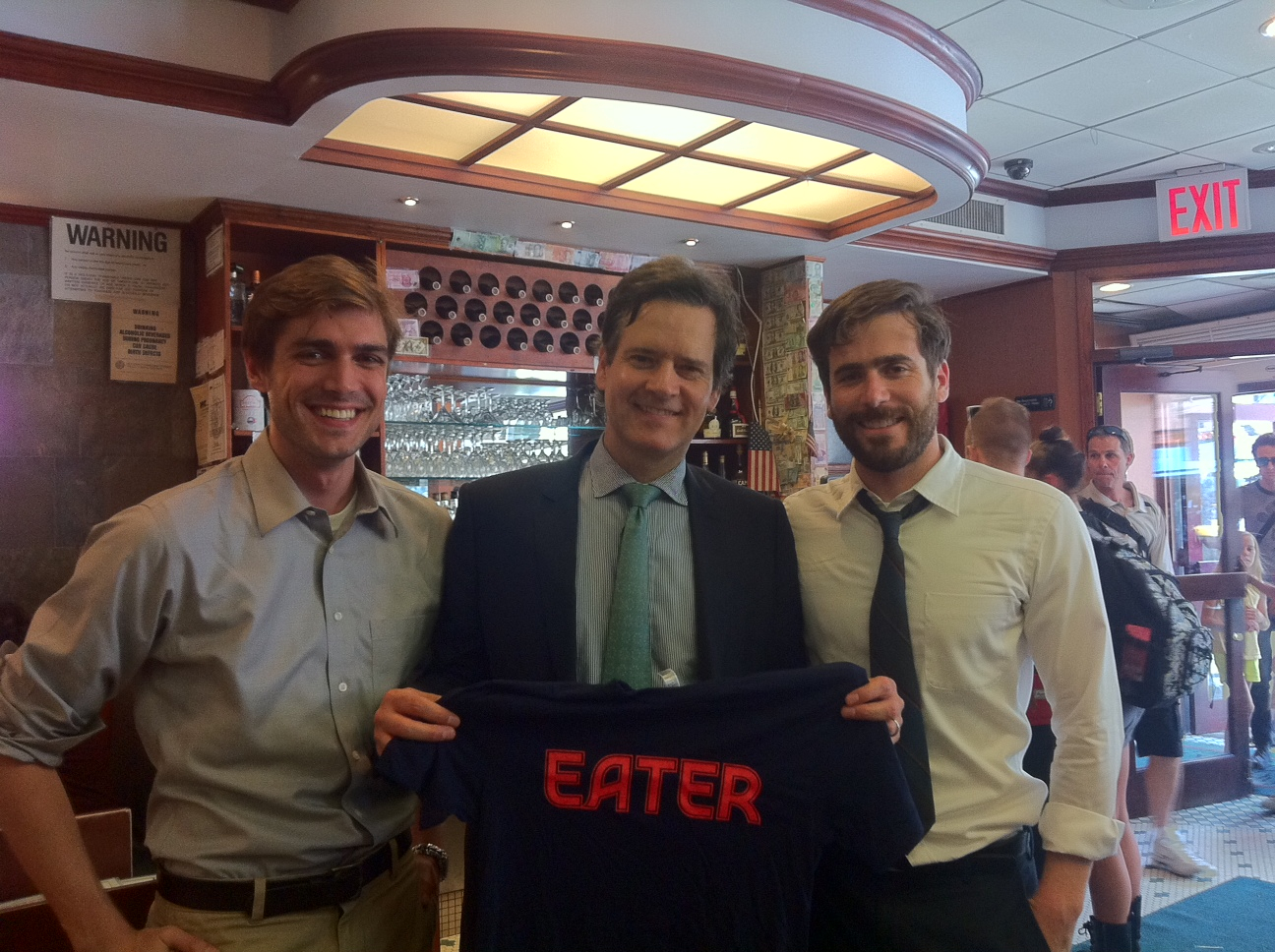 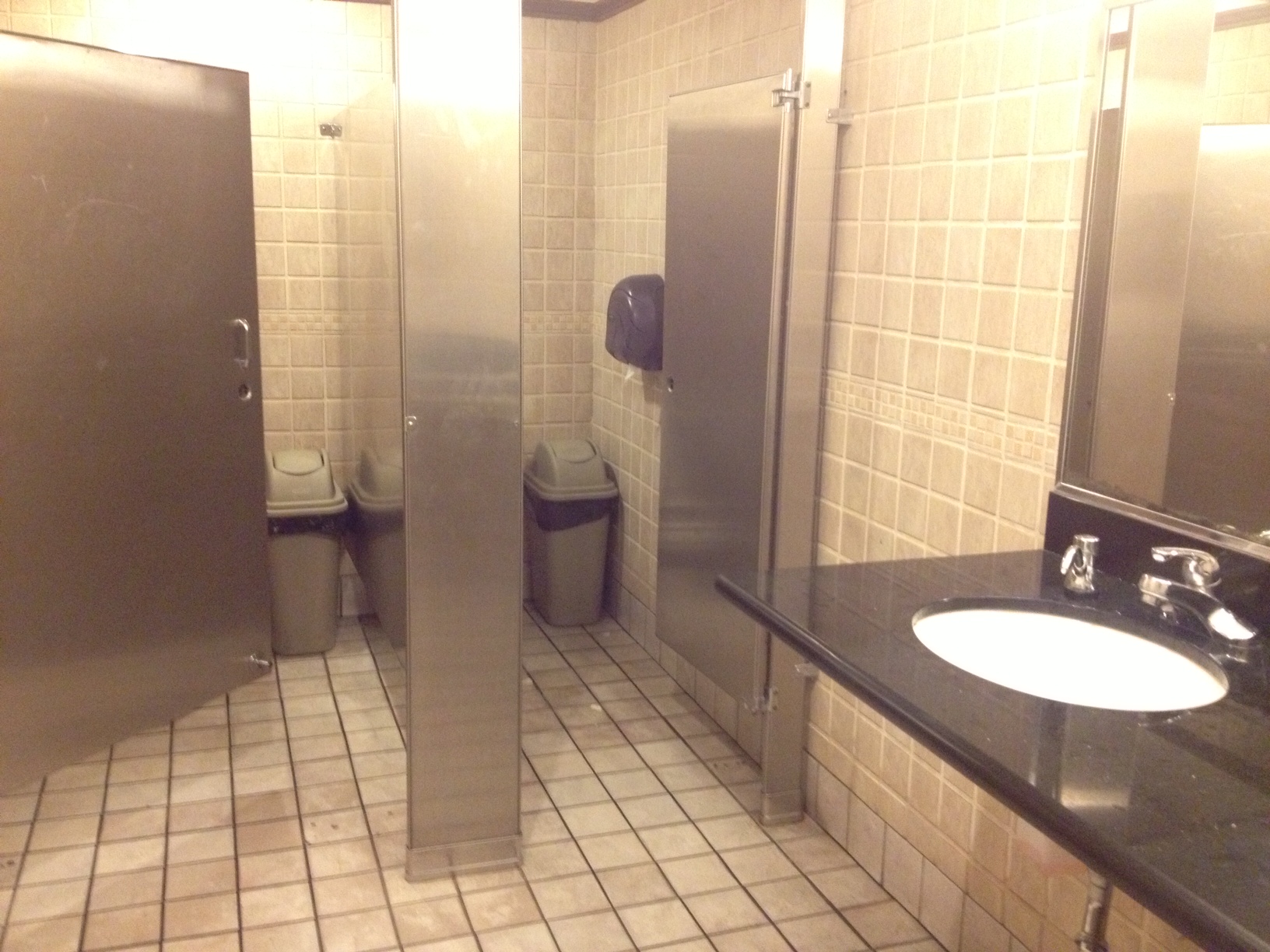 A visit to the ladies room. Clean, quiet. Two sinks, two stalls and a garbage can.


1:05: Here's what that dessert case looks like right now: 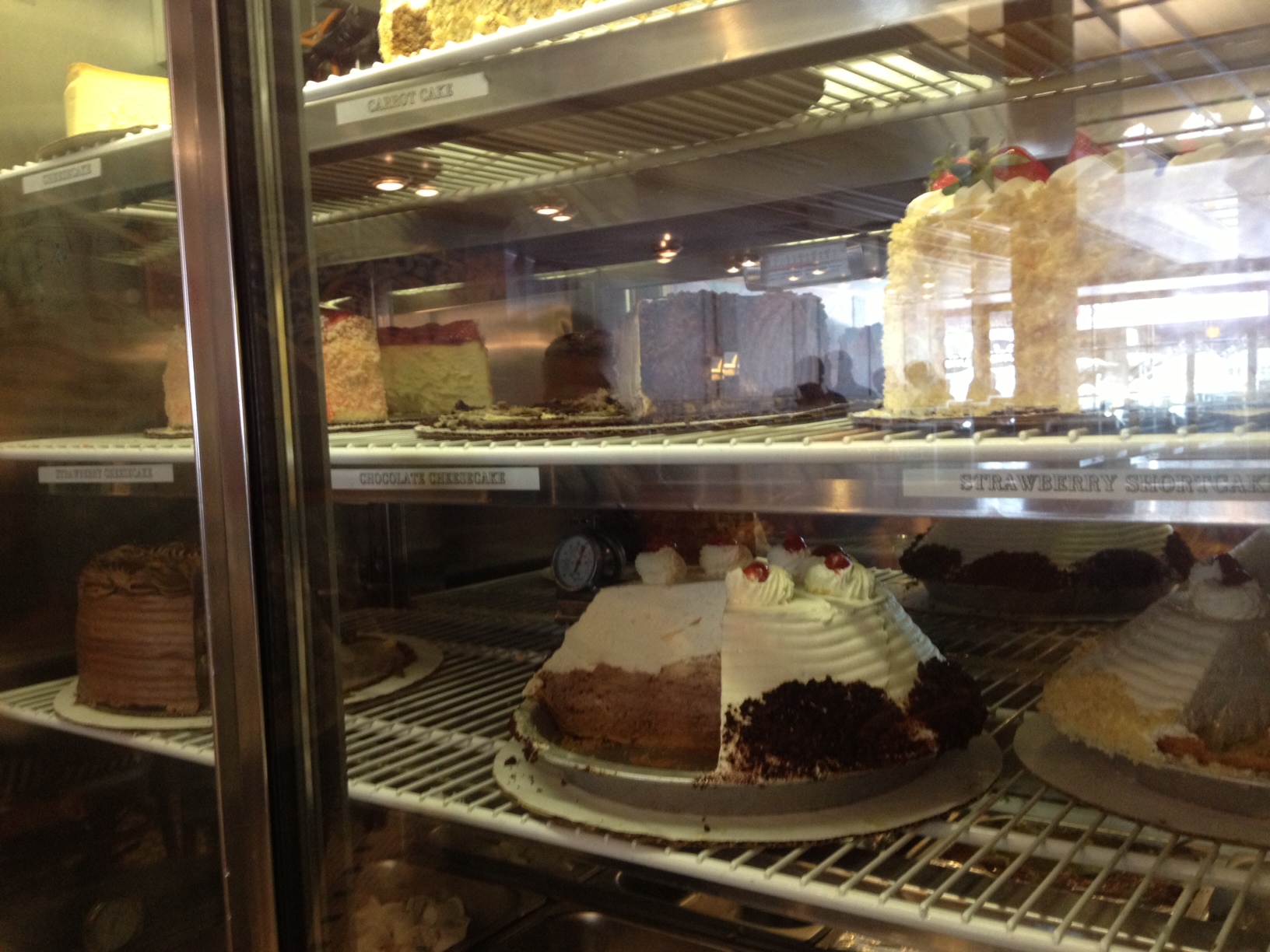 The first apartment I lived in in NYC was on 10th and 44th in 2004, and as such, many of my latest nights (and earliest mornings) found me drawn through Westway's doors for French fries and gravy, or whatever I felt would best soak up the booze I subjected my 22-year-old self to. Westway was a safe haven, a neighborhood anchor that always had good food and never gave me a case of diner stomach.

If I really love someone, I'll bring them to Westway. Also I once sat in a booth near Ernie Sabella aka Pumba in Lion King aka Mr. Carosi in Saved By the Bell aka "Naked Man" in one episode of Seinfeld, so that was exciting. Best diner. Ever.

12:45: Lots of people with luggage here, probably on their way to Port Authority after lunch. Also: lots of cargo shorts. 12:40: According to our waiter, each table goes through at least three bottles of ketchup a day, and there are 38 tables. That's 114 bottles of ketchup.

12:36: Westway has a full bar, which is located right behind the host podium: 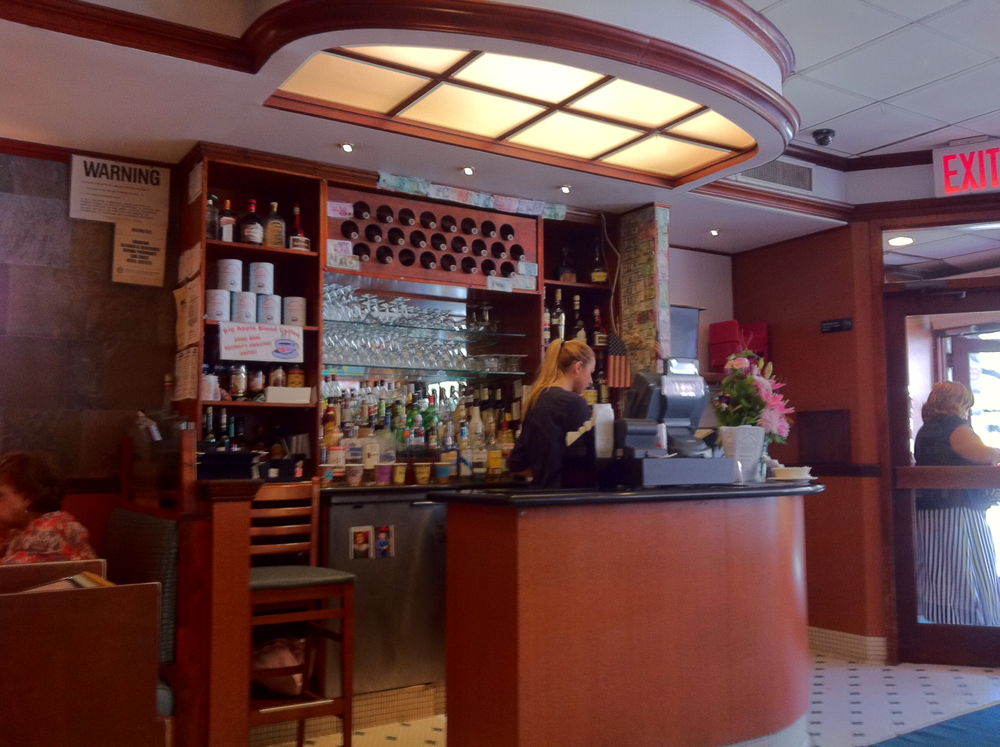 No one's drinking cocktails right now. A police officer just came in and ordered some coffee to go.

12:33: Every single table is taken right now, and there's a small wait at the door. Counter seats still available.

12:31: Before we get much further here, we should tip our hats to This American Life, which pulled a similar stunt back in 2000 at the Golden Apple Diner in Chicago, and (via @kittenwithawhip) Besha Rodell's piece in Creative Loafing, where she chronicled 24 hours at an Atlanta Waffle House. Please go and read and listen to those pieces.

12:26: Dead ringer for Brian Dennehy just walked in. He headed to the back counter.

12:25: According to our waiter, most popular sandwich is the "Times Square," which is made with turkey, lettuce, avocado, and onion. Ordering one ASAP. 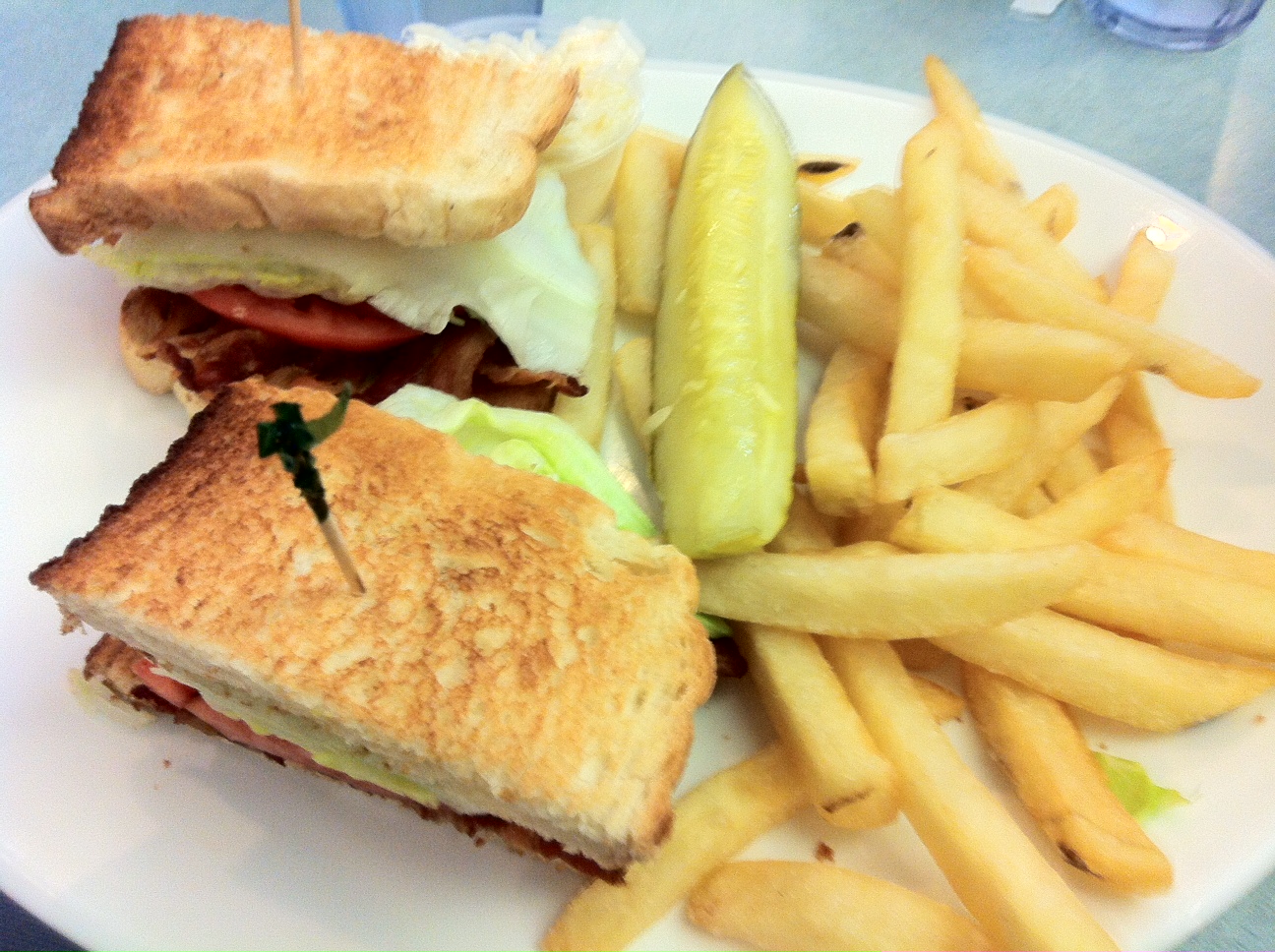 12:16: The owner, Alex, stops by to say hello. Seems like a nice gentleman. This is clearly the "lunch rush."

Which of these tasty treats will be consumed over the course of the next 24 hours? 12:10: New hostess comes to the host podium, several employees depart. Start of a new shift, perhaps.

12:03: Woman in a Southern Hospitality shirt picks up a huge order. Staff meal? 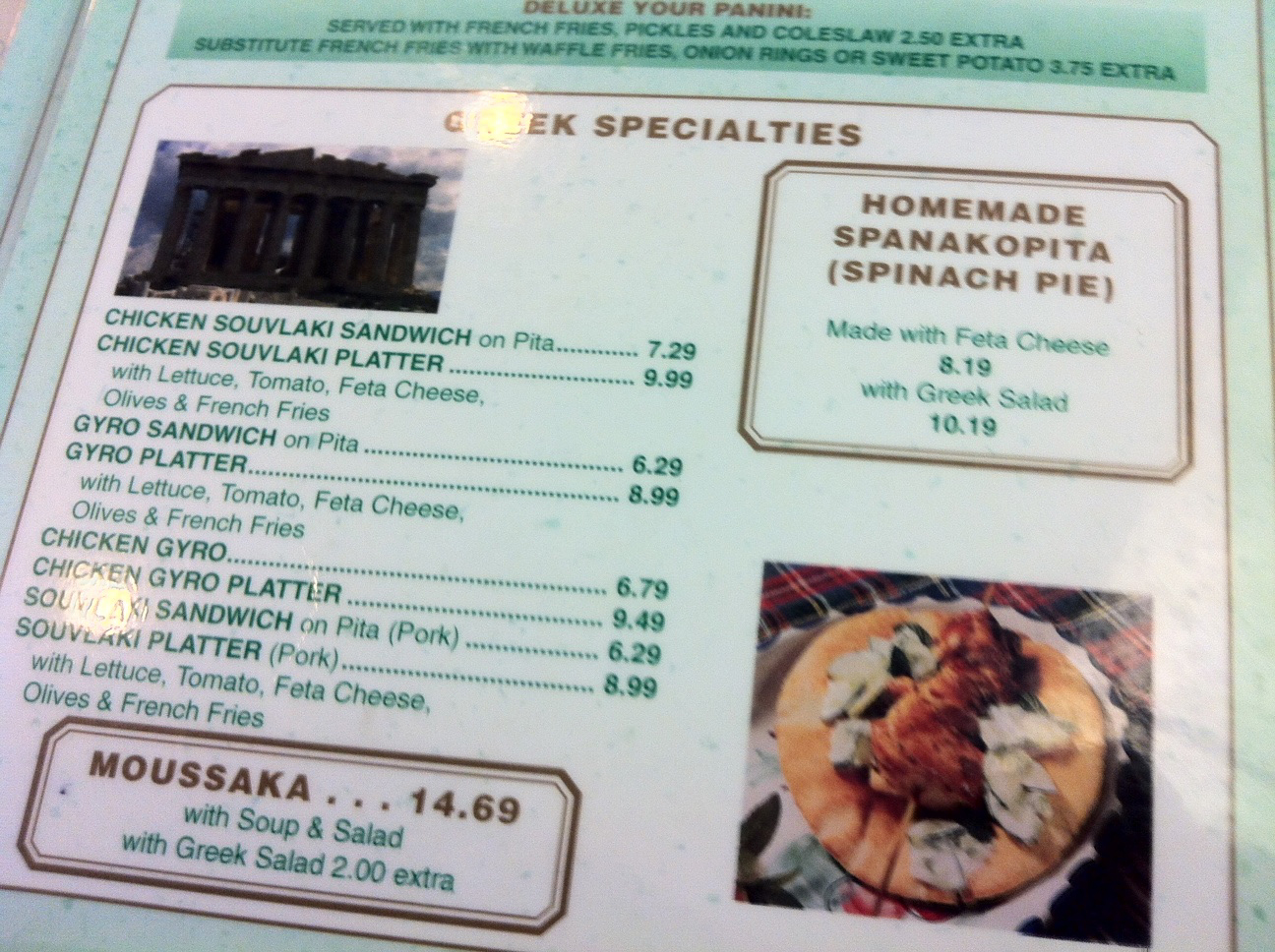 11:50: Eater is on the scene at the Westway. The vibe: 75 percent at capacity. Mix of groups and solo diners. Two six-tops of tourists walked in right along with team Eater. No music.