Eater's 24-hour liveblog has entered phase two. During the first six hours of the liveblog, Andrew Friedman, Eamon Rockey, Mandy Oser, and Dan Saltzstein popped in, and Eater chatted with several patrons and waiters. Now, the customers are ordering beer instead of coffee, and the Westway has an overall looser vibe. If you're in the neighborhood, do stop by and say hello — we're here all night. And if you have a story about Westway, send it to the tipline.

Here's a glimpse at what's going on at Westway right now:

11:54: The party's getting going now. Team Eater is four strong at this point, and in addition to Jonny Porkpie, Glazier, and Liao, lawyer Jasmine Moy and industry pro (and one-time Gatekeeper) Corry Arnold have recently arrived. Here's Arnold five-and-a-half years ago; she won't let us take a "then-and-now" picture: 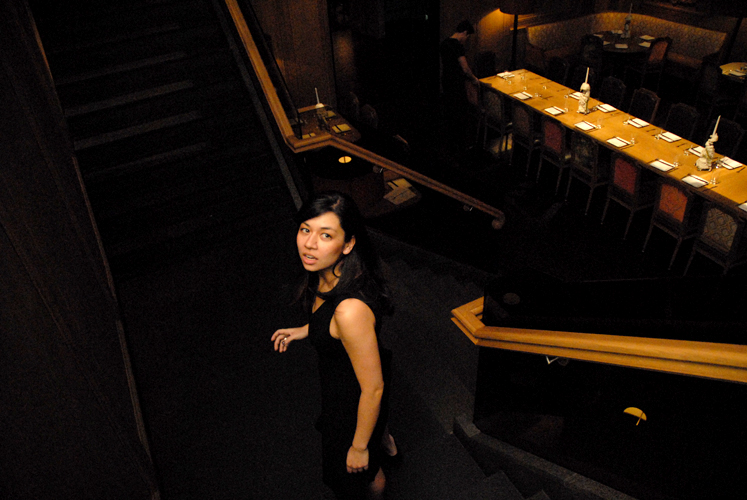 11:39: Mathew Glazier watched The Dictator last night. His review: "Actually funny. If you go into that and say, 'I want to be entertained,' you'll be entertained. If you want to pretend you're a pseudo-academic, you'll be disappointed. It's low-brow." Eater NY Features Editor Gabe Ulla agrees.

Martini Glass: "Standard. Not your contemporary cocktail glass you'd find at your nice cocktail establishment."
Color: "Nice."
Presentation: "Points off for jarred cherry. I don't frankly care for the straws floating in the drink."
Aroma: "Hints of bogwater. Let's say you took a cherry, and then you crammed it somewhere. That's what it smells like."
Taste: "My two-word review: Fruity turpentine."

11:32: Here's visual evidence of Glazier and Liao. There's also now an order of fries and one house Manhattan on the table. 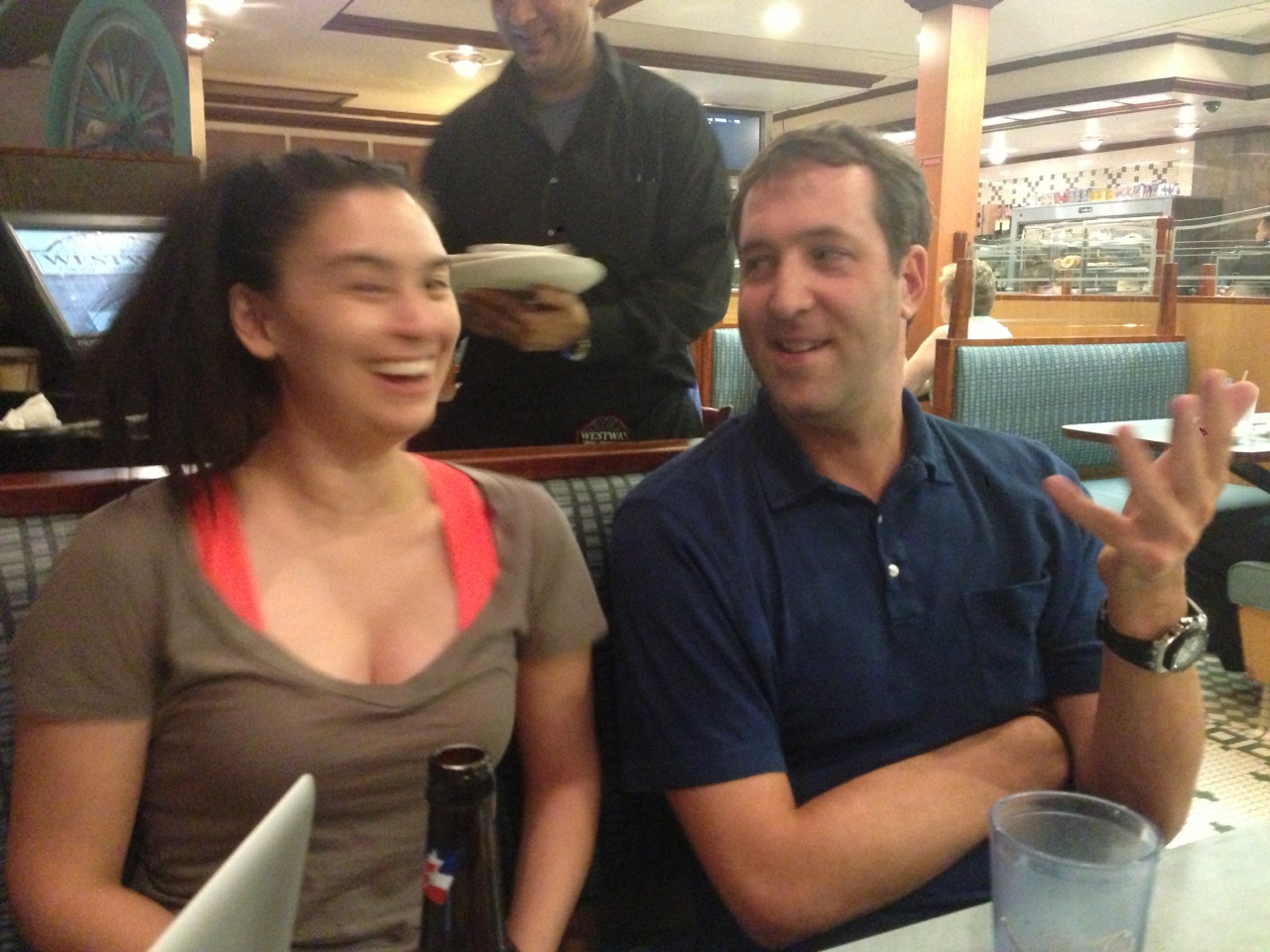 10:44: The latest guest is Jonny Porkpie, the Burlesque Mayor of New York, who runs a burlesque show going on now at the Elektra Theater called Pinchbottom's Pretençión. Drink of choice this evening: Budweiser. On why the expected post-theater dinner rush never materialized, he explains that most shows were dark tonight because they ran matinées today. Duh. 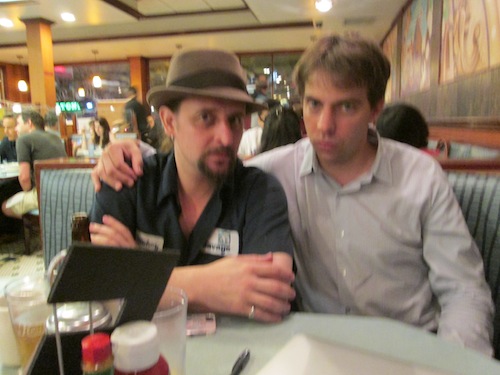 On how theater people decide where to go after a show, he explains: "Someone has a favorite bar. Usually whoever the alpha person of the show is, says 'yeah we're going to such-and-such.' It might be the production manager, it might be the lead." 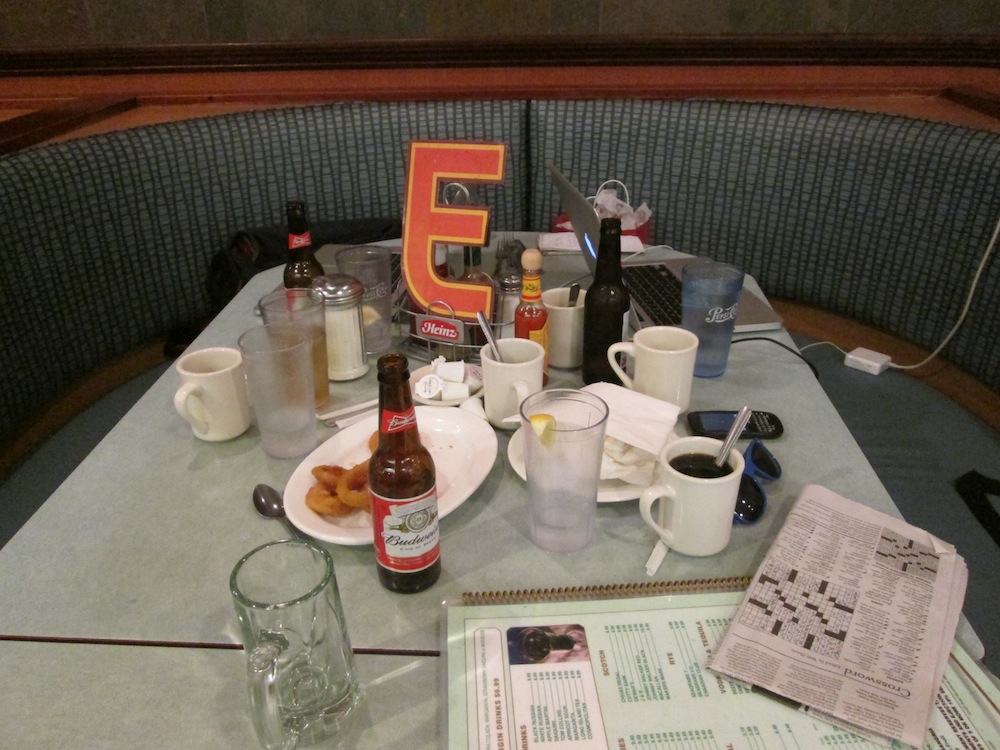 10:11: The last two cops just left. For the first time in two full hours, there are no police officers in Westway Diner. Anything goes now.

10:01: A propos of nothing, there are exactly 10 restaurants on the same block as the Westway. The fact that the diner's more or less been busy (with a couple lulls at the expected times) is honestly pretty impressive. Speaking of the number 10, Eater's now been here for over 10 hours and still going strong!

9:51: Three young and attractive people who just arrived came here straight from seeing My Name Is Asher Lev. They said it was great. The post-theater crowd is definitely arriving.

9:40: To the reader who just wrote in about having dinner at Westway during the free fry giveaway: You should have said hello! If you're still here, we're at the back booth. The one with the big red E. 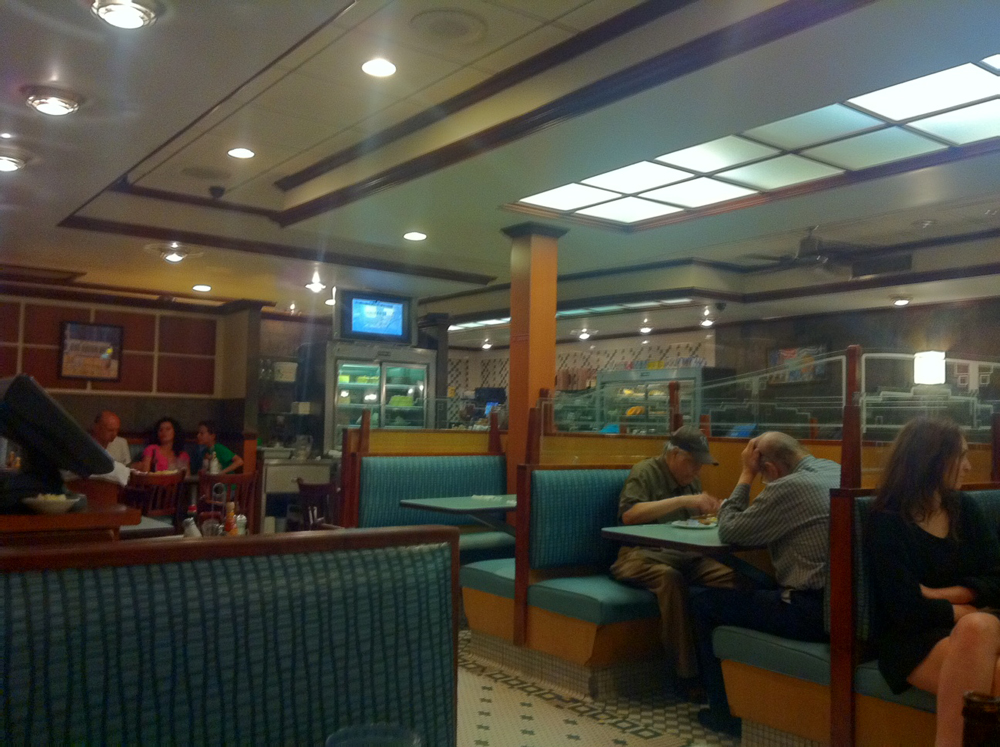 9:25: Right now there are 33 people in the Westway Diner. The dinner rush is definitely over (but a post-theater rush is expected). Here's the breakdown of how people are grouped:

The four tops include one family and a group that seems to be three cab drivers and one very young woman. Only one of the solo diners is reading anything.

Name: Andrea and Barbara (they declined a photograph)
From: Italy
Why They Came to Westway Today: Says Andrea: "Because it's cheap and it's good. We were walking here, came and tried it before. Came back tonight for dinner." Andrea had been to Westway twice before, and he has grabbed muffins to-go as well. Barbara, who was making her second Westway visit ever, called them, "The biggest muffins in New York."
What They Ordered: A beer (Blue Moon) and a Caesar salad for Andrea; a Heinekin and a chicken sandwich with fries for Barbara.

8:57: Daphne Zuniga look-alike who dined here earlier today with a young tattooed gentleman at around 3 p.m. just walked back in the diner holding a Pee Chee folder. She scanned the room with her eyes, then turned around and walked out. What was she looking for?

8:55: At the table near the front door, there's a kid, maybe 17, who is now doing card tricks for his mom. Half eaten sandwiches on the table.

8:52: The dessert case doesn't look all that different than how it did at 4:37. Cakes, pies, brownies, and cookies don't seem to be flying off the shelf tonight. 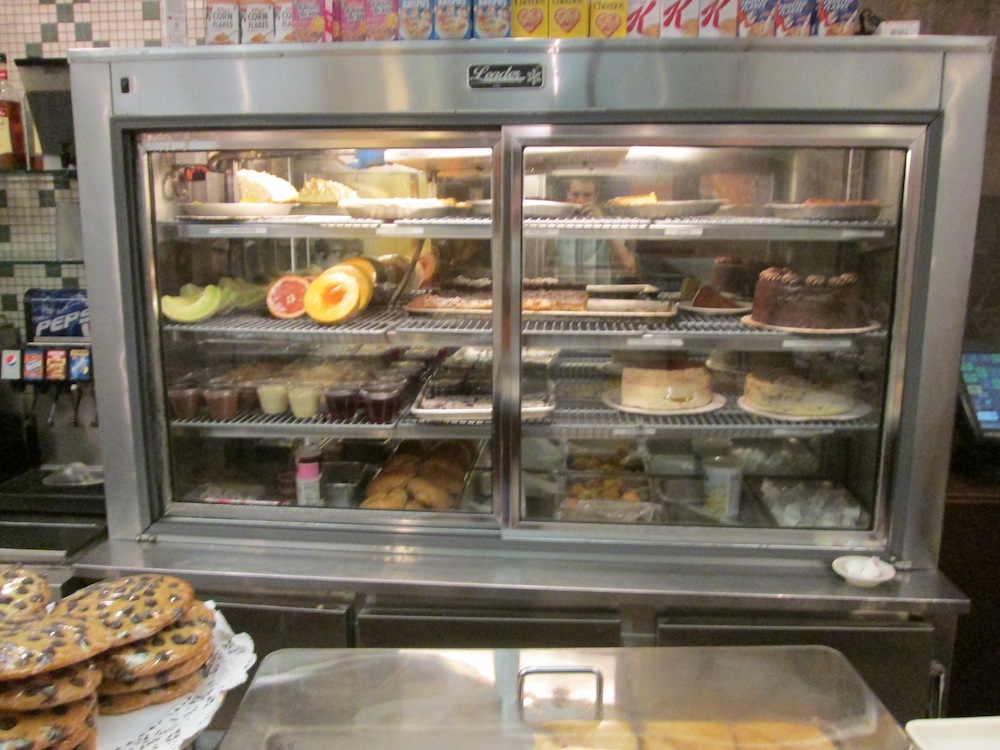 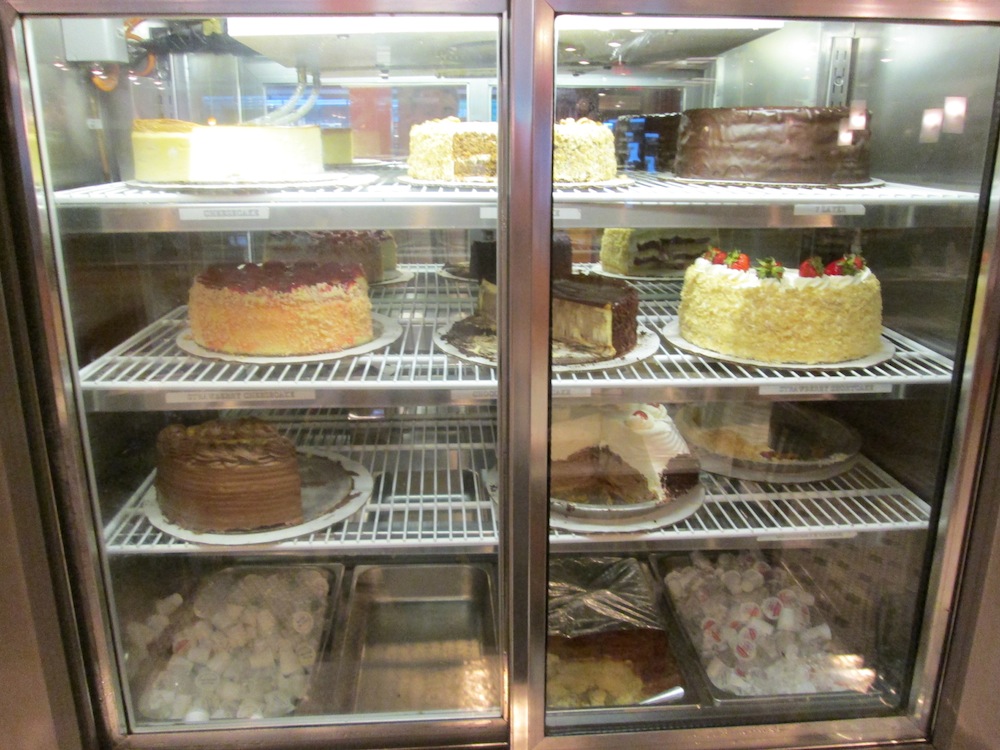 8:45: Jack, the bartender/host, explains that the Screwdriver is the most popular drink at the Westway, but that people mostly order drinks Thursday through Sunday, not on a Wednesday night like tonight. The frozen margaritas are also popular. He says that people frequently order drinks when they dine here after shows.

8:39 Crossword update! More than halfway through, but starting to have some trouble. 35-Across?five letter word for "part of a posy, maybe"?has Team Eater stumped. 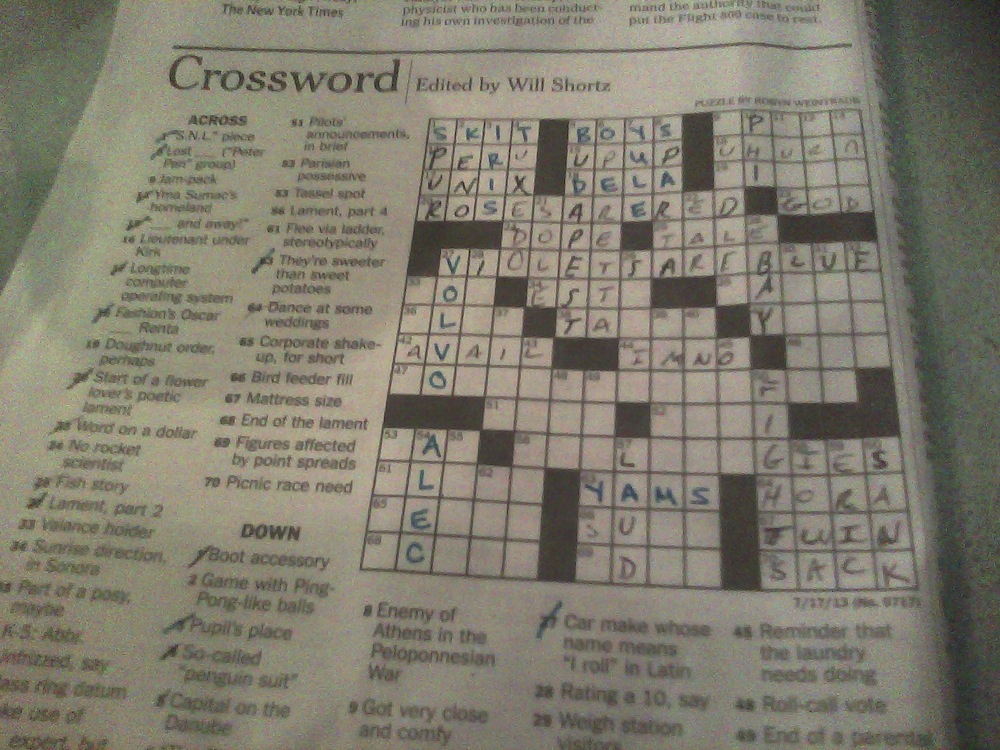 8:27: Overheard at the Westway: "The nine percent two-mile hill kills me. It was?I walked it twice. My parents came over for dinner, and I walked it again. Saying that it's the best hike listed in the world? That's whack."

Cordials? Brandies? International Coffees? Domestic and imported beers? SANGRIA?! Westway's got you covered. No one from Team Eater has tried any of these beverages yet, but that might change soon. 8:13 It was starting to look like the dinner crowd was thinning out, but several tables?including a couple of groups of younger dudes?just came in. Three cops also just arrived, and for the first five minutes they were here they sat in different parts of the diner. They're together now.

8:07: Table next to ours ordered the following: fettuccine Alfredo, sliders, spaghetti with meatballs, chili, and three Heinekens.
8:05: More food: grilled chicken club and onion rings. The food comes out about five minutes after you order it. 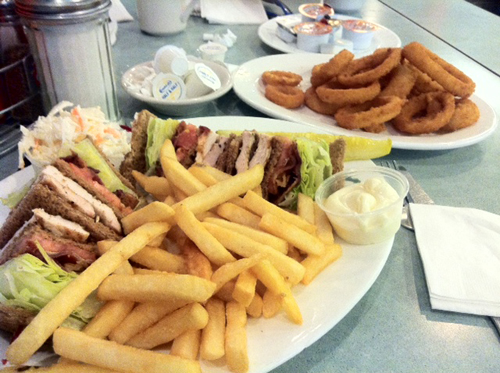 8:02: The fantastic waiter Sergio is packing up and heading out, and the hostess has been replaced at the front counter by a manager. All signs point to this being a shift change.

7:47: Let's do a quickfire round of Diner Hot Topics. Does a place need to serve breakfast all day to be considered a diner? We say yes, what say you? 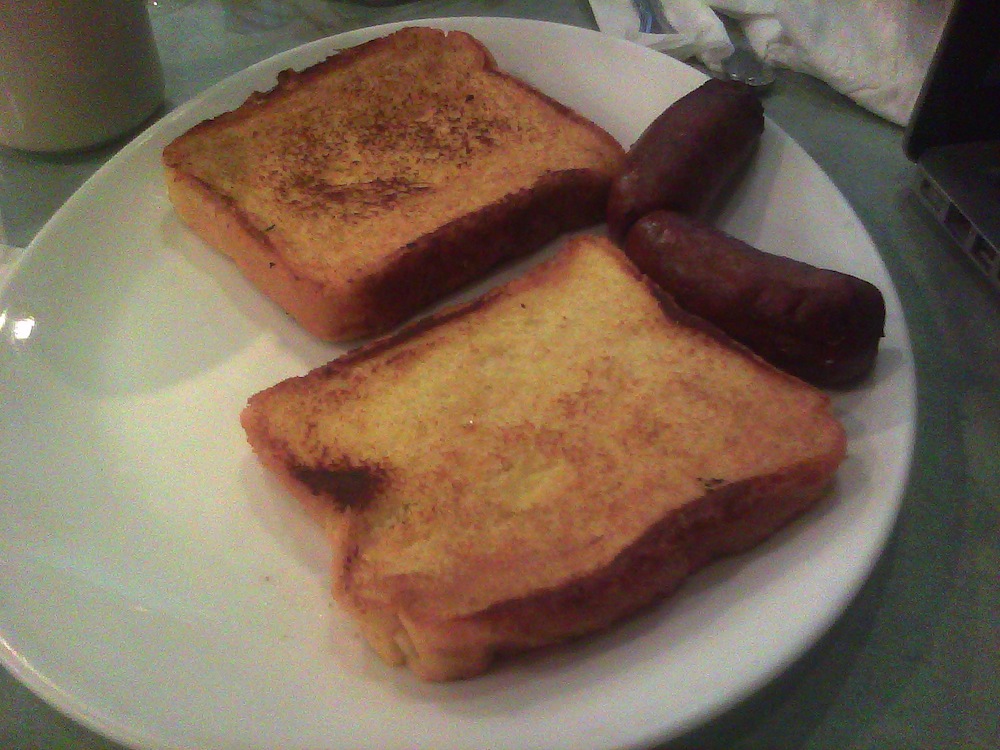 7:27: From the tipline, here's another reader's love letter to the Westway:

Been eating there mostly late night since I moved to the neighborhood in 1992-3. Favorite moments: a late night (about 4am) argument between what was obviously a pimp & his whore about money. It was quiet and intense (they were at a small table in that center section of little 2 tops and their table was right next to mind). It was in about 1998 and it felt like a real New York moment. She paid the bill and they walked out.

Right before Annie opened in previews this season the two leads (Katie finneran and Anthony warlow) were sitting at a table near my group of friends. They were clearly running through lines and ideas. A totally different type of New York moment.

I eat there regularly - the broiled tilapia dinner is actually ridiculously good, but the veggies are usually overcooked.

Consider this a reminder that if you have a great story about the Westway, or your favorite diner, send it to the tipline. 7:09: Karen and Nelson were at Westway tonight for dinner. They're regulars, but they didn't have to pay for it this time because Eater took care of the bill. We're randomly picking up tabs, so watch out, this could be you! 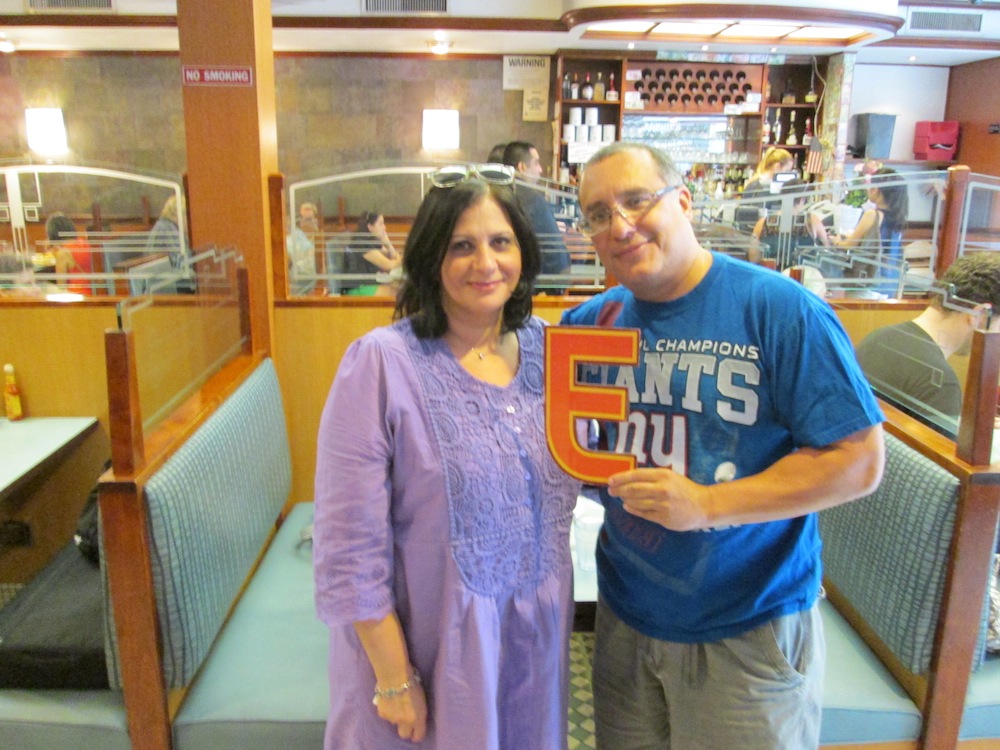 6:55: A tipster writes in: "Hey, Jonny Greenwood of Radiohead was interviewed by NME at Westway on the occasion of the release of OK Computer in 1997!" This is true. Check out the cover here. 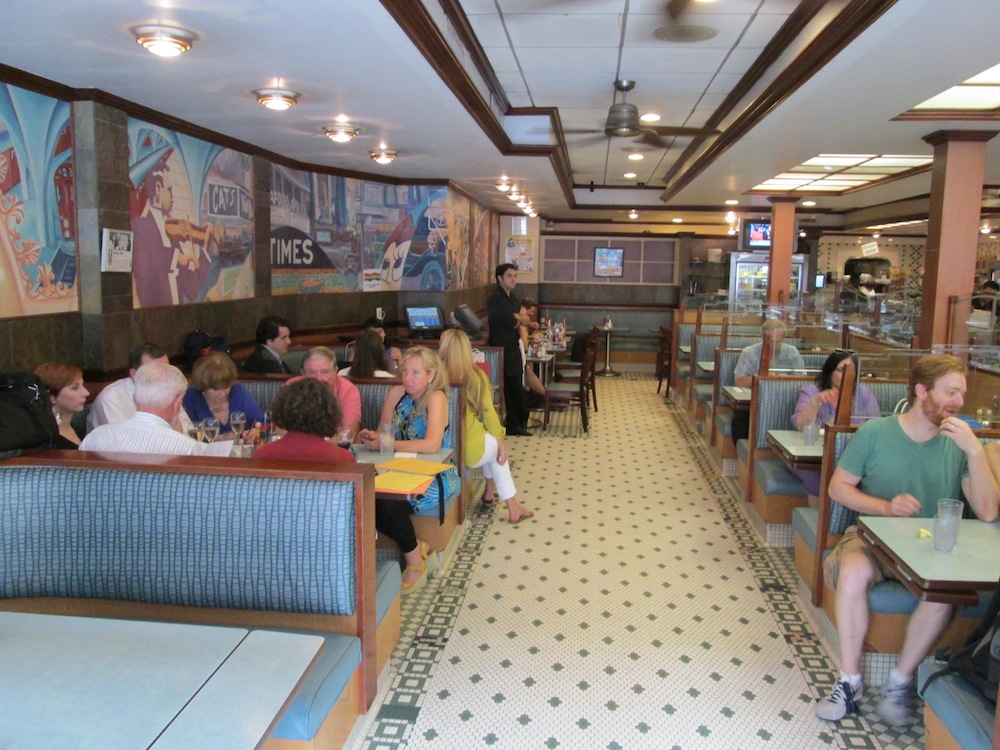 6:37 Surprise visit! The team from Explore Charleston, in town this week for meetings, is here to say hi. Asked about their favorite greasy spoons back home, they waffle a little bit and then settle on ... the Waffle House. No judgments here. Also: they can't believe how hot it is.

6:29: Overheard at the Westway: "The Tea Party is an organization that's funded by your local Exxon dealer."

6:27: It's been at least two hours since we ate. Food order number three (but really just a snack): mozzarella sticks. And they're pretty delish. 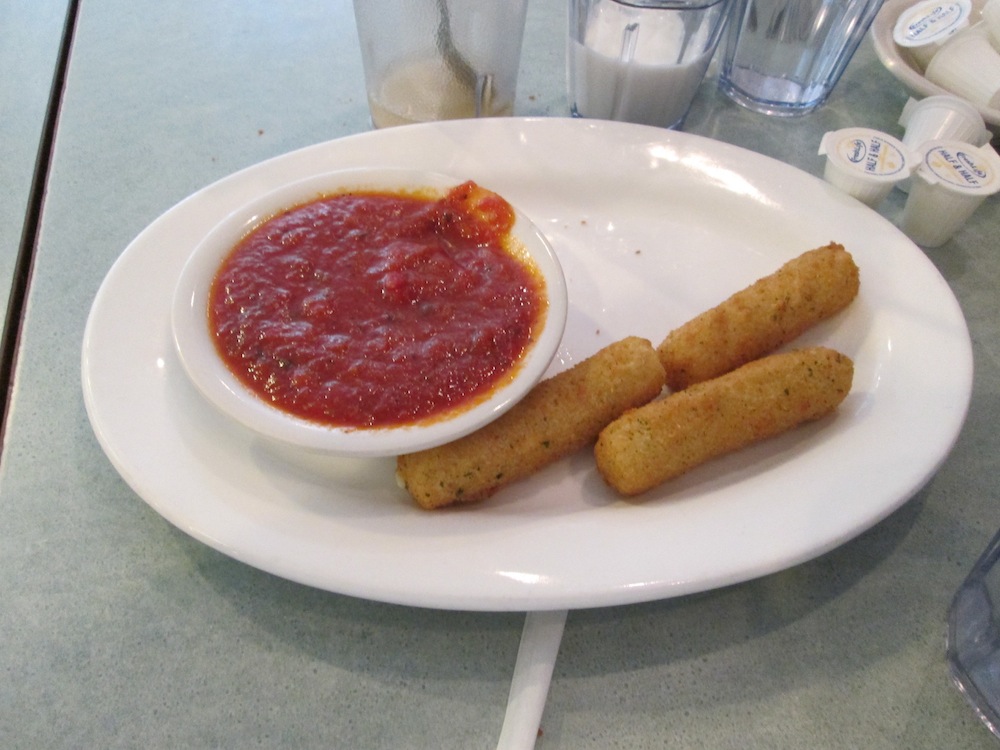 6:23: Westway Fact Blast: According to one of the gentlemen behind the bar, the most popular dessert at Westway Diner is the cheesecake, but "we go through all of it pretty quickly."

6:15: Fries are on Eater for the next hour. That's right: If you order fries at the Westway from now through 7:15, Eater will pay for it.

6:10: Earlier today, the owner explained to Eater that a man wrote a book in the booth next to ours, and that book became a movie. But he did not know the name of the book, what it was about, or who wrote it.

6:05: Popular dish at the Westway: chicken strips with fries. Many, many plates of strips and fries have come out of the kitchen so far.

6:01: Can't vouch for the smoothies, but the banana milkshake was fab. 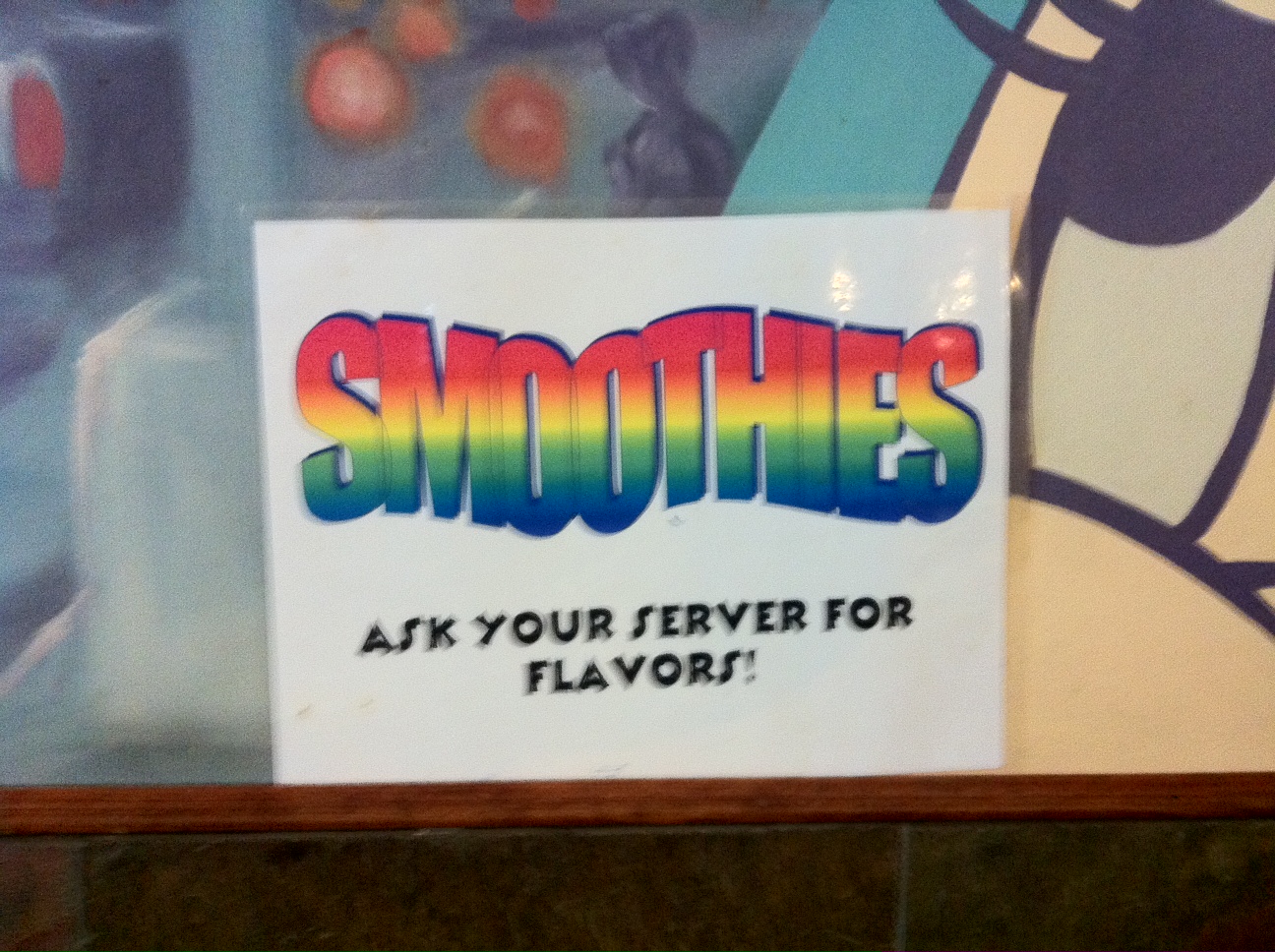 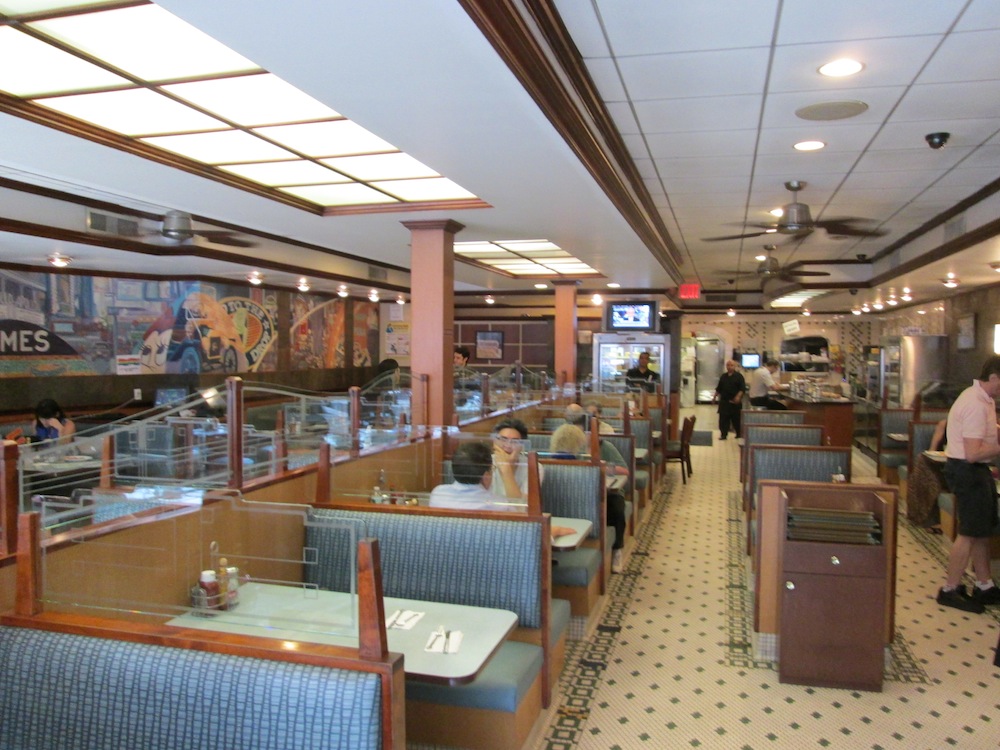