Eater's 24-hour liveblog is now halfway over. During the first six hours of the liveblog, Andrew Friedman, Eamon Rockey, Mandy Oser, and Dan Saltzstein popped in, and Eater chatted with several patrons and waiters. In the second part, things started slowly but a good party started to grow later. Now, the diner's practically empty, save for Robert Sietsema eating some pie and cops dropping in for late dinners. If you're in the neighborhood, do stop by and say hello — we're here all night. And if you have a story about Westway, send it to the tipline.

Here's a glimpse at what's going on at Westway right now:
5:55: Besides the muffins, the kitchen actually makes quite a lot of things from scratch. The cook is here at 2 a.m. to start making the daily soups and sauces. A baker comes in five days a week to make all the pies and cakes. They should be in at 10 a.m., so check back then.

5:40: There's a couple and three young boys in basketball jerseys now. As the post-club gays roll out this place is about to get real quiet. The sun is coming up and the Westway is transitioning into breakfast mode.

5:38: Did you know the Westway bakes their own muffins? This carrot specimen comes warm from the oven. 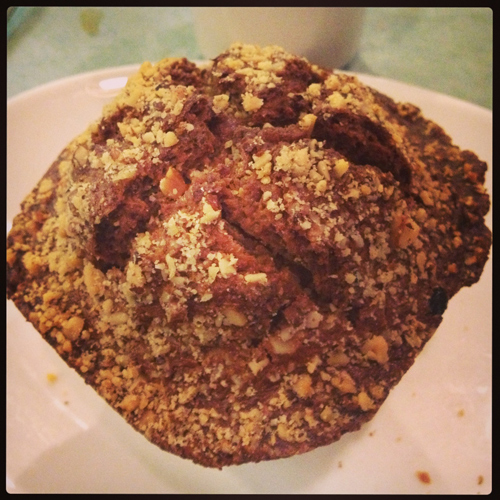 5:25: These are our friends from around 3 a.m. who had cokes, soup, salads, and shrimp and fried fish.

5:15:: Our night shift waiter Mohammad says he doesn't like the night shift but he does it for family reasons. The biggest issue is it's hard to sleep during the day. He said Wednesday and Sunday nights are the slowest. But usually in the summer, regardless of the day, tourists fill the place from 8 p.m. - midnight. His omelette rec: the California.

5:10: The guys, after complaining about the music, are playing Rihanna through an iPhone. It's getting saucy over there.

5:05: Now some headlines from the Daily News:

· Headliner: NYTimes "A Night Out With" columnist Liza Ghorbani claims she gave birth to Oasis frontman Liam Gallagher's baby.
· Mets star Matt Harvey says he wants to date as many hot women as Derek Jeter
· The MTA is planning to ramp up efforts to keep the subways clean. They're hiring more cleaners, increasing their rat extermination efforts, and reconfiguring Metrocard vending machines to keep long lines from blocking people entering the subway.
· NYPD Commissioner Raymond Kelly may be considering a job as the head of Homeland Security
· The former head of contracting operations for the 92nd St. Y is being investigated for his involvement in a scheme to demand kickbacks from Y vendors.
· Queens Borough President Helen Marshall supports a plan to tear down the iconic 5Pointz building, which has been a legal canvas for graffiti artists, to make room for a pair of luxury towers. CB2 voted unanimously against the project.
· A couple has been charged with using identity theft to finance, among other things, a trip to Disney World to get engaged
· A couple is suing the super of their Upper East Side apartment after he let their dog Toto die in their smoke filled apartment, even after he heard the dog's cries for help
· Plans are in the works for a sequel to Sharknado that would be set in NYC

· The Vatican has decreed that Catholics who cannot attend World Youth Day in Rio de Janeiro next week can follow on Twitter and still be pardoned for their sins 5:00: Topic of conversation in the Westway: hate crimes. From gay hate crimes in the West Village to George Zimmerman in Florida.

4:50: With a new New York Times comes a new crossword: 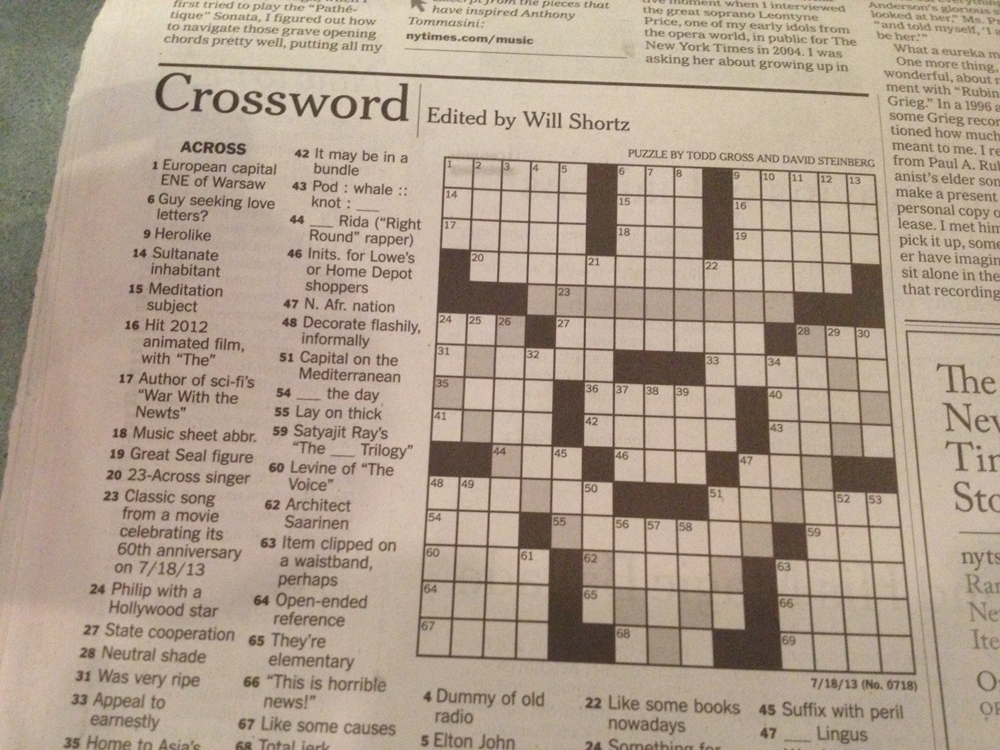 4:45: Another gay couple comes in. One in the big group goes over for hugs and invites them to join their table. It's kind of amazing how this can go from a ghost town to getting a little rowdy.

4:35: We spoke too soon. A vocal group of six gays come in. They refer to our friend Bart (scroll down) as Vladamir Putin until they ask and realize he's from Poland. Then it's all dick jokes. Order: eggs, waffles, a burger, a wrap. They take 10 minutes to order and end with, "Just spit in his, not in mine."

4:20: Here, now, a peek behind the curtain of the delivery world of the Westway: 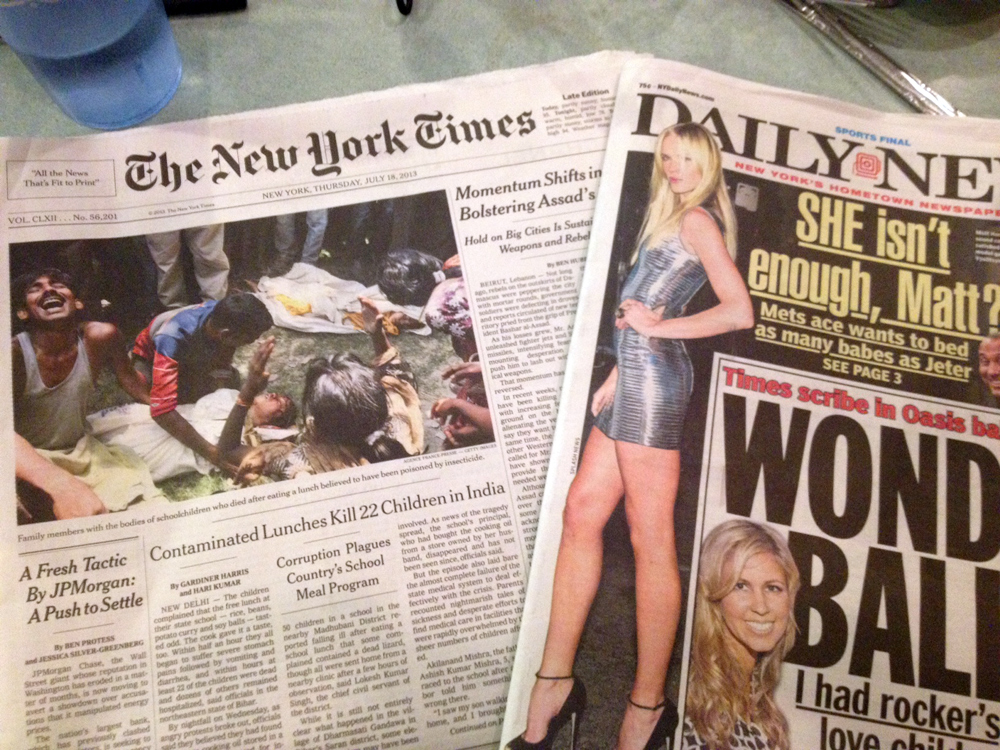 Highlights from the Times (find links over here:

· Front page: Rebels are losing ground in Syria as Assad reasserts his authority.
· International: North Korea claims the arms confiscated in Panama were legal
· National: Scandalized politicians often win re-election
· New York: Skinny-dipping in New York waters!
· Business: Brian Stelter delves into the world of Apple TV
· Arts: This upcoming awards season is going to have a slew of nonfiction narratives
· Styles: Something about juice bars!
· Home: A family's beautiful home in an old farmhouse in the Alps

Sports: Alex Rodriquez's special relationshop with poverty-stricken PA town Reading 4:05: Breaking update. The Chef's Specialties of the Day are beef stew with garden vegetables and fettucine a la Greque with feta cheese and spinach. The beef stew should be ready to order by 9:30 a.m. The fettucine will probably take until 10 a.m. Also, the daily batch of muffins (blueberry and carrot) is in the oven right now.

3:47: Rachel Jeantel on the TV, Bon Jovi blaring from the kitchen, delirium setting in.

3:42: Spot check: dude alone on his headphones eating breakfast, couple having an intense conversation in a booth, another couple (sitting on the same side of one booth), the six dudes. Staff is refilling salt and sugar.

3:37: And now, a primer on how to eat ice creamed waffles and fries at Diners in MN:

3:33: Those six dudes are eating hot split pea soup. Each and every one of them.

3:15: Finally some action: a group of six young guys come in, all order cokes. 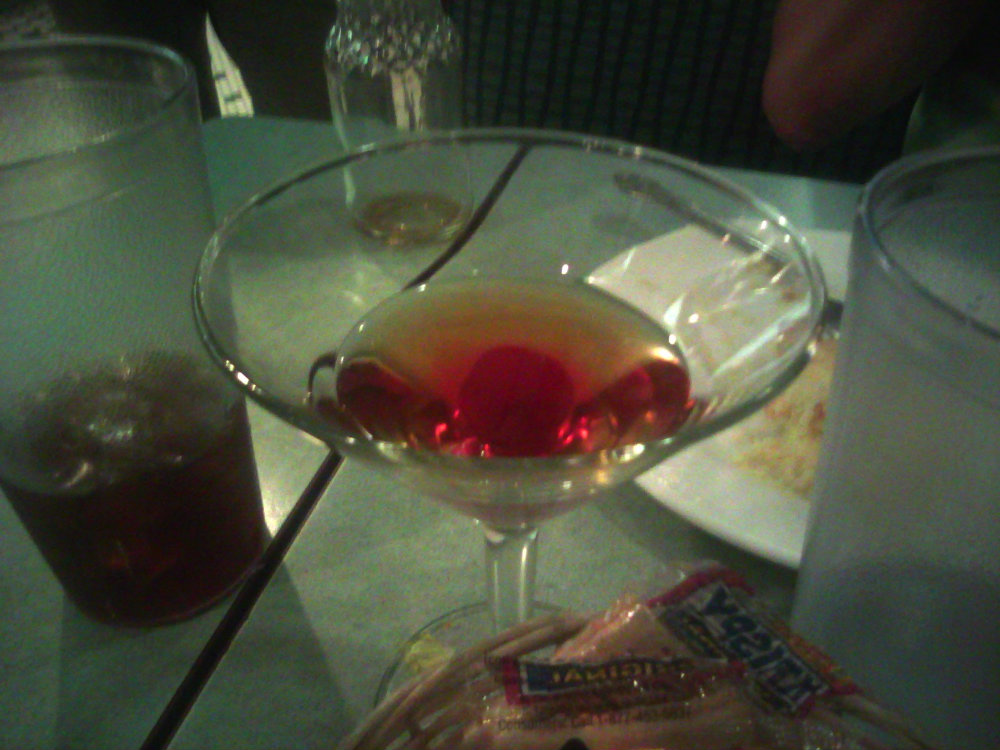 2:45: Sietsema on the chicken parm sandwich: "If it has a double cutlet it has to be good. It's great...in a trashy sort of way."

2:35: Sietsema's verdict on the fries, which have arrived at the table and been devoured relentlessly for hours: "Out of the bag, vehicles for ketchup."

2:30: Brandon and Mel smartly ordered the waffle sundae (Belgian waffle with vanilla and chocolate ice cream, whipped cream, and pineapple topping) and fries (pictured in the gallery below). They're pregaming for the halal cart on 53rd and 6th. The waffle sundae, by the way, was spectacular. 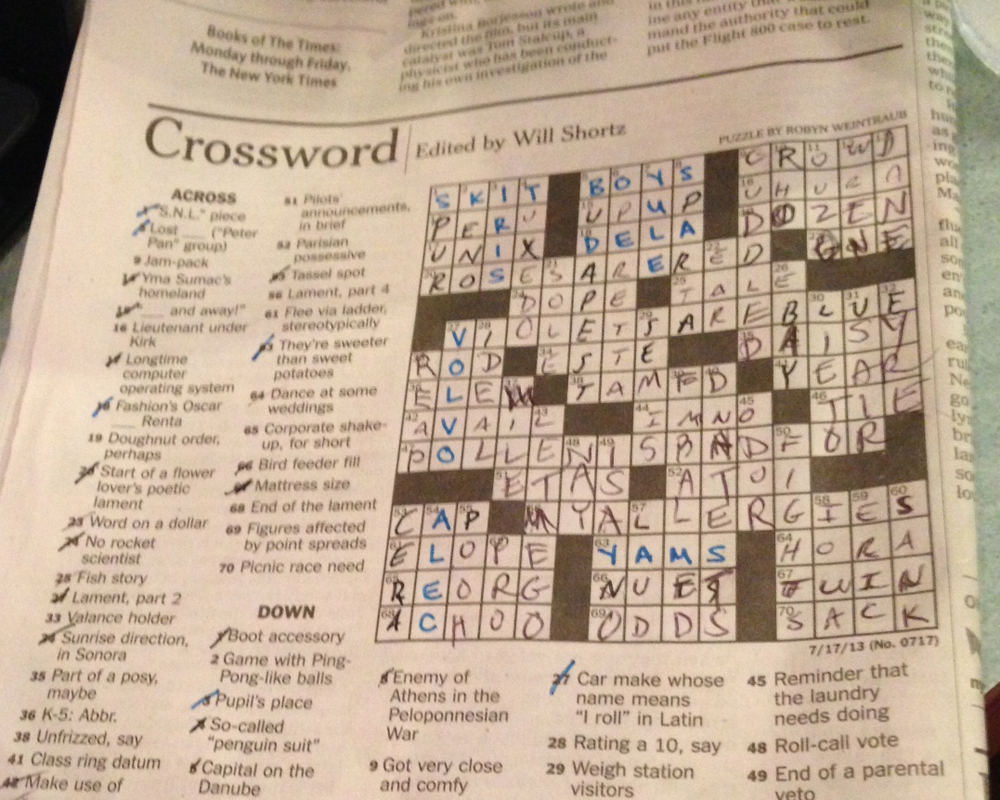 2:20: Brandon McRill and Mel Fuechtmann, the owner and assistant GM of Pearl and Ash are here. Just in time for a Long Island Iced Tea tasting!

2:15: A letter from a reader, who recently moved out of New York to Oxford, MS: "My story: My best guy friend, who lived on 45th and 8th, used to meet sometimes on Saturdays for breakfast at the Westway. One particular Saturday was the day after the Times Square Car Bomber. Consequently, it was also the day after the Kentucky Derby. I served such strong juleps at my Derby party, neither of us knew it had happened until we saw flashes of his apartment building on the TV at the Westway. It's a good thing the bomb didn't go off. He never could have evacuated in time in his condition."

2:08: It's time for pie. To be precise: cheesecake and chocolate cream. Robert Sietsema on the chocolate cream: "I'm fairly certain that's chicken liver." 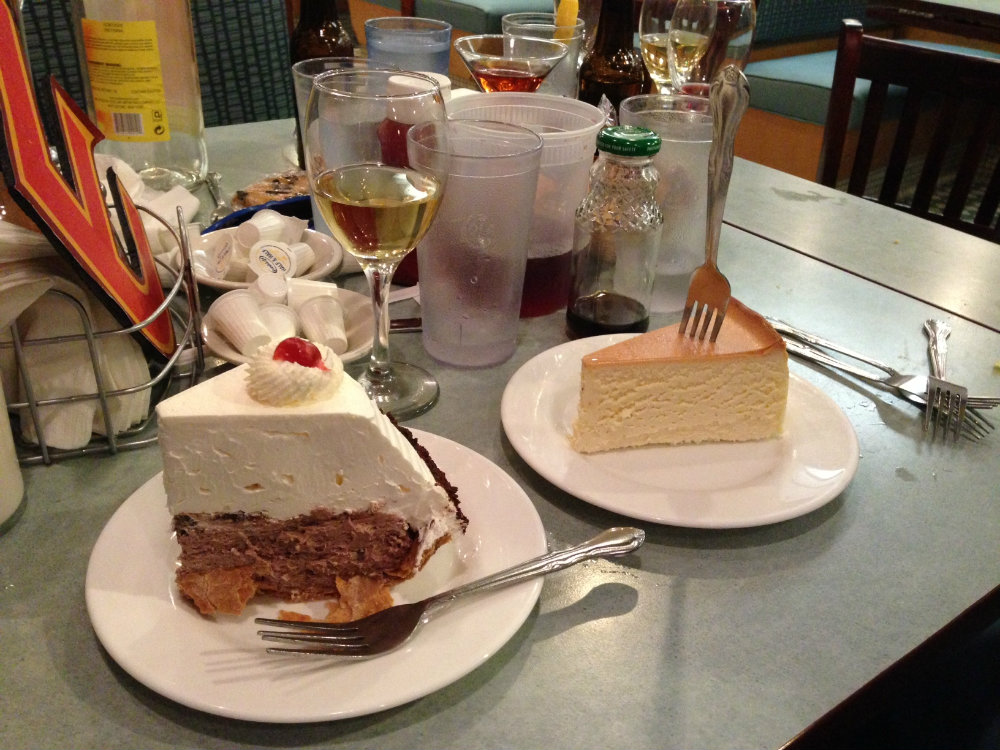 2:00: And another quick video from the talented David Sherwin, on the back of house life during the Wednesday night shift:

1:53: Friend of the site Jasmine Moy relates this story from one long-ago trip to the Westway:

I was here with my friend Julie. We would always come here for mozzarella sticks and disco fries. She happened to also get a grilled cheese that night. We heard a bunch of people giggling, and it made us feel like they were up to no good. We turned around and it was a bunch of kids, and they were pointing and laughing at this LGBT person. She was eating by herself. She was an ... extremely unfortunate looking person. She didn't do it big, didn't do her hair, didn't do her eyes. And she was by herself. She was by herself, and these kids were about to making fun of her, so we invited her to join us. She worked at a television station, and wasn't out at work or anywhere else, so this was her way of trying to be herself. We thought it was good and brave of her to be doing this by herself, to be coming out and doing it herself. Even if she wash't very good at it yet. But we actually had the best night together. We had the best conversations. She was lovely. You'll always make friends at the Westway.

1:34: Reader Beth is on her way out, and leaves with these parting thoughts: "There are very few places in the country where you can get this kind of experience, especially in a big city. It's what makes New York New York. And it's terrifying that more and more of these places are closing up. ? What happens when we don't have diners anymore?"

1:27: The moussaka has come out, almost immediately after ordering (just like everything here, the speed is incredible). The verdict is generally positive: 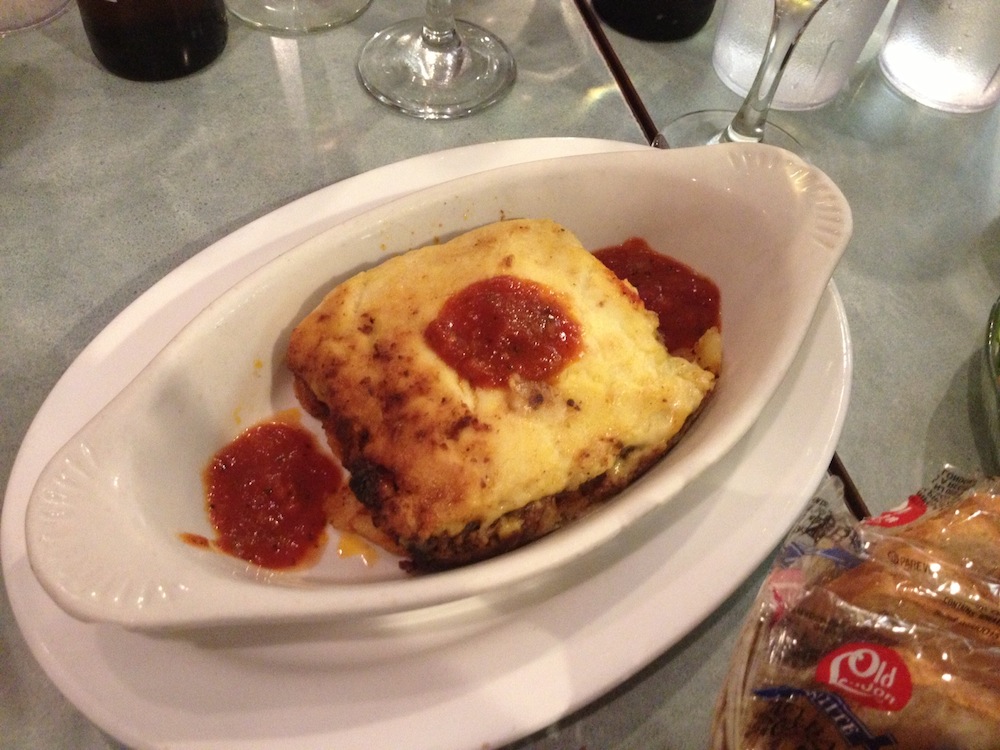 1:13: A little 24-hour diner ops intel. At a little after 1 a.m., chairs went up in the front of the restaurant, and the floors got mopped. Other than the Eater party, there's four people in here. One two-top and two solo diners. 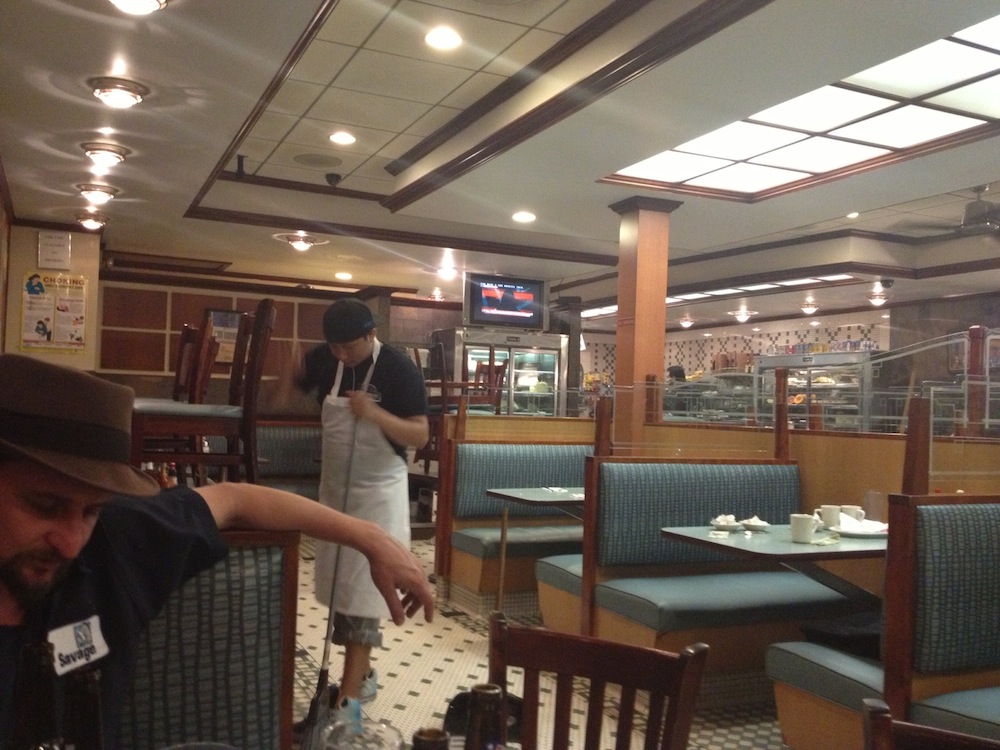 1:11: One of the cooks tells Eater that Wednesdays are the slowest nights. As evidence, he was able to hand-crush ice for the Chang-style wine. As additional evidence of this, here's Bart, the dancing waiter:

12:59: A reader named Beth has joined the party. On the pizza burger deluxe: "I'm a little surprised that a pizza burger has tomato and lettuce on it. ? Oh, I don't know. I wouldn't get it again. The tomato sauce is too much the same as the hamburger flavor. And mozzarella just doesn't taste like anything on it." 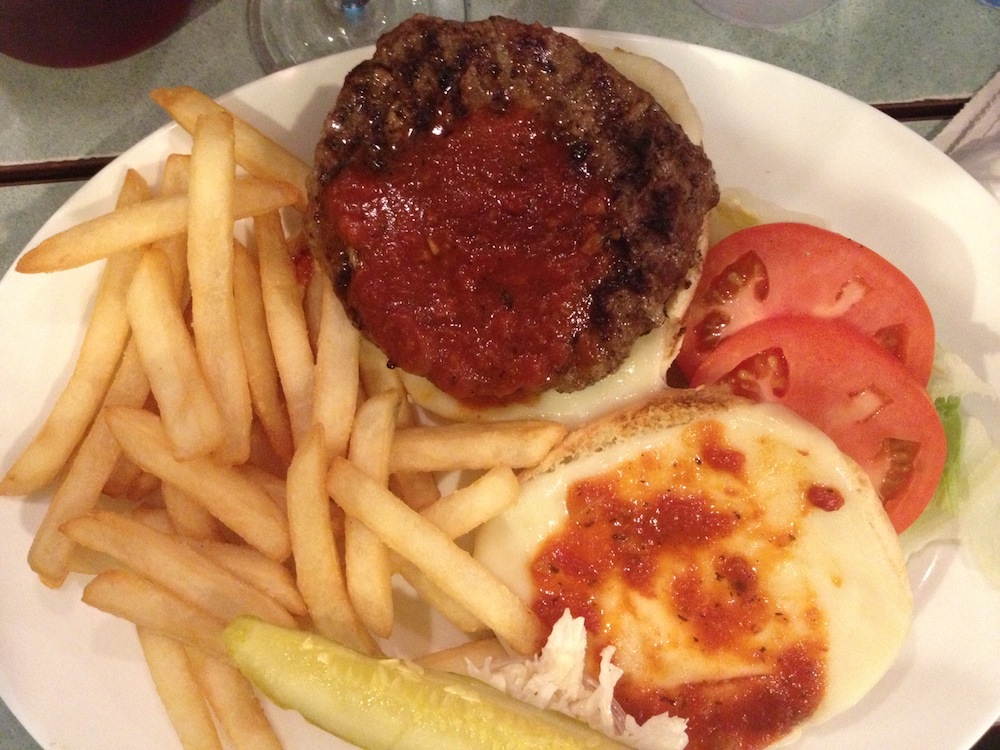 12:51: Former Voice critic Robert Sietsema has arrived, bringing his wealth of great intel. According to Sietsema, between 1950 and 1970, 600 diners opened in the five boroughs, almost all of them by Greeks. Also, on the crowd lingering outside in Hell's Kitchen after midnight: "tattooed ladies, knots of drifters, professional beggars with babies clasped to their breasts. And of course the drunkies."

12:34: Here's the most recent food order: Cherry pie a la mode, a pizza burger deluxe, and 2 eggs over easy with sausage and buttered whole wheat toast. Here's the group at the moment: 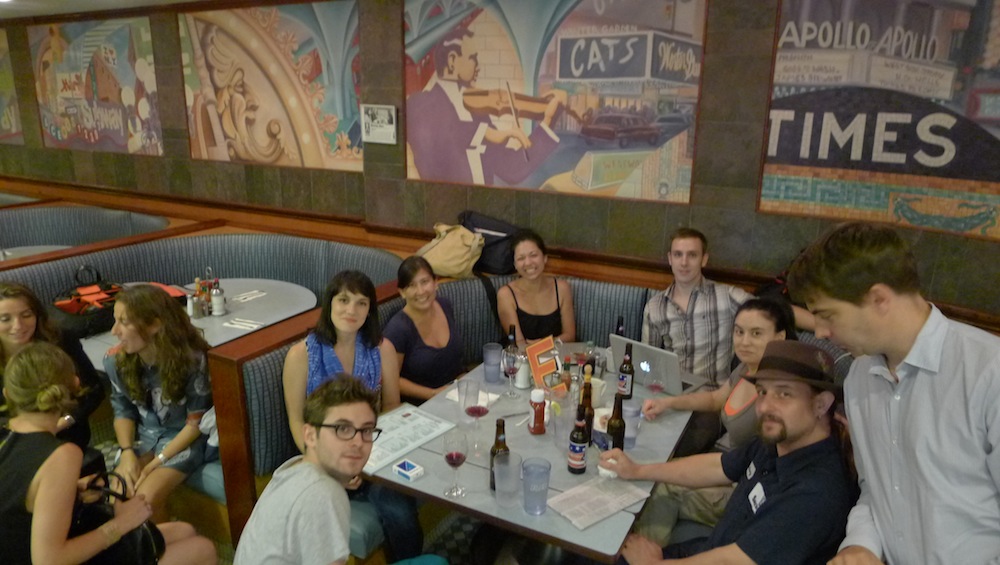 12:24: This is the way Dave Chang prefers this wine, says Jordan Salcito: 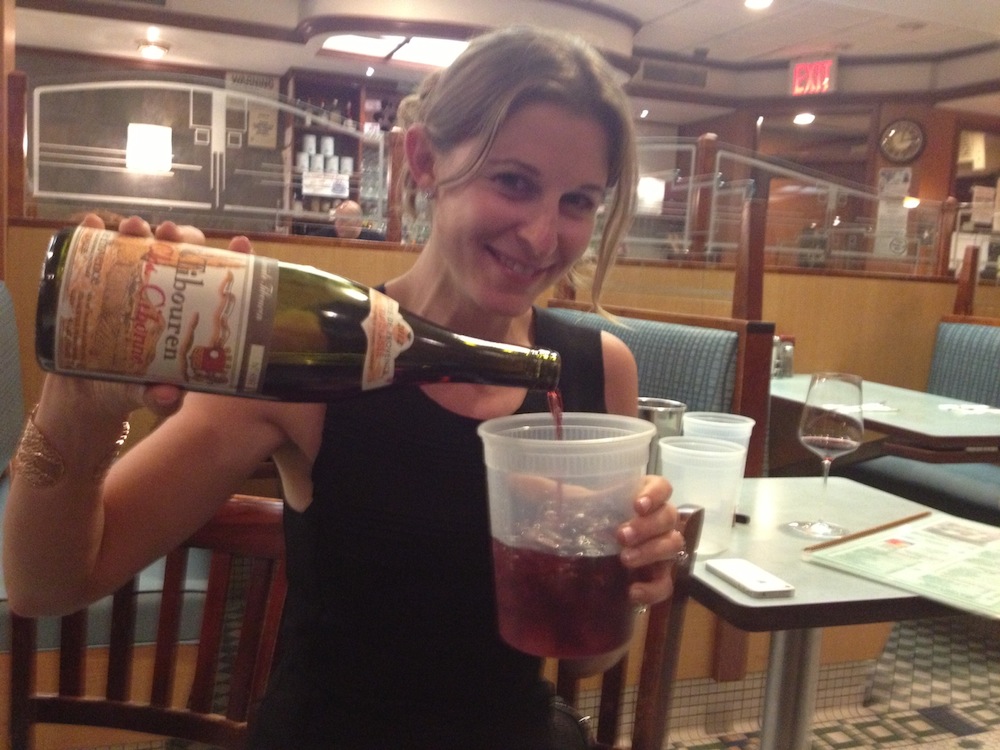 12:22 Two more police officers have entered, hanging out at the bar. This ends the two hours of lawlessness that's existed since the last group of first responders left the diner.

12:15: A longtime Eater friend and Hell's Kitchen resident fills us in on the minor rivalry between Westway and the nearby Galaxy Diner. As it turns out, it's less a real rivalry (as others had suggested) and "more of a mild affiliation." He's a Galaxy person "because of convenience and because the grilled cheese is better" at Galaxy.