Welcome to a special Greasy Spoons Week edition of Lifers, a feature in which Eater interviews the men and women who have worked in the restaurant and bar industry for the better part of their lives, sharing their stories and more. 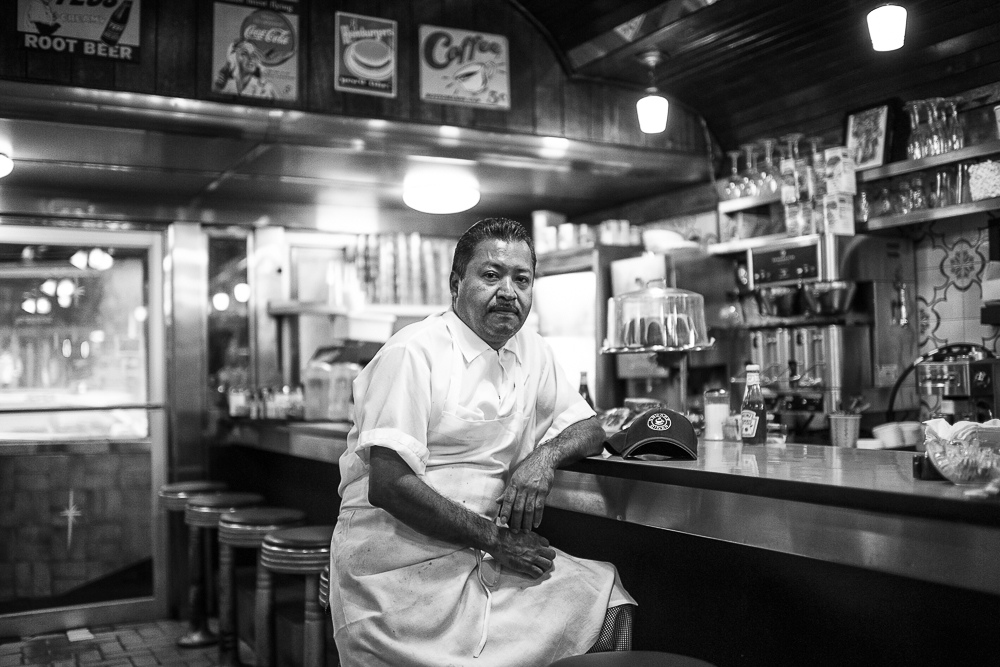 Celso Reyes is a weekday line cook at Square Diner in Tribeca, a position he's held down for almost 16 years now. A native of Puebla, Mexico, Reyes has worked in New York restaurants since he moved here in the 1980s. Square Diner itself has been open at least since 1971, when John Siderakis assumed ownership, with Siderakis's son-in-law Theodore Karounos owning it since 2001. The Tribeca old-timer remains one of New York's most iconic diners, in no small part because of the work of Reyes.

When did you start at Square Diner?

How long have you been in New York, and have you always been cooking?

Since the '80s. Always working in restaurants.

Do you have a favorite thing to cook, something you always enjoy people ordering?

Sure, sure. The hamburgers, or ... what else? We don't have any pastas here because we don't have the space, but before working here I worked on the pastas at the sautée [station], and I love pastas. But over here they don't have sautée, so it's all on the grill or charcoal.

What's your favorite thing to eat from the menu here?

Do you have any strange or funny stories from customers over the years?

Some customers, sometimes they say they find something in their food, or they say something's no good?overcooked or undercooked?and most of the time they're just complaining about some type of nothing.

How do you handle that?

I just tell them, "You want to change your food? We can change it for you." If you want something else, I'll get you something else.

Which is the busiest time of day?

Lunch, because sometimes the people rush, they come in for half an hour and they want everything fast. Sometimes that's a little more harder than others. Other times, people come in more slowly and I have more time to cook.

When the new owner took over in 2001, how did the restaurant or your job change?

They still kept a lot, but they changed a little bit. They changed the menu and added more stuff. And sometimes when they put in more stuff, you have to do more. Before it was a small menu, now it's a big one. Before they only had three or four salads, now there's like 12 salads, there's wraps, there's paninis. Just more stuff.

Do you have any family or children?

Oh yes. Four kids, three girls and one boy. I have one grandkid, three months old.

When you're not here, on your weekends, what do you do for fun?

I like to just stay at the house, and I like to go to the park to do some running. Before, when I was doing the morning shift from 6 to 3, I would take a shower and then I would go to get some exercise, but this was more than five years ago.

Did you ever think you'd be cooking for this much of your life?

I never did think that. [Laughs] I never think that, but coming here, I started in the restaurant world. I started as a dishwasher, then to salads, then I started to learn a little. And then, it's not so bad.
· All Coverage of Greasy Spoons Week [~ENY~]