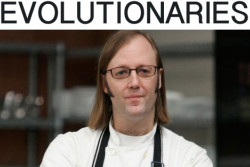 1) Evolutionaries: Wylie Dufresne: The most recent installment of HRN's original series "Evolutionaries" features chef and food sorcerer Wylie Dufresne. He talks about how his cooking has changed over the years following the opening of his second restaurant, Alder, and how his experience cooking for Jean-Georges Vongerichten has stayed with him all these years:

To this day I think some of my fondest memories come from that kitchen. I've tried to capture a lot of the spirit and the style of that place in my career, and oddly I think with the opening of Alder, I'm finally getting even closer to a restaurant that really has a lot of the Jojo DNA in it. I really loved my time there. It was a formative time, but it was also just so much fun. It was terrifying and backbreaking and all those things that I think of about playing sports--that I both loved and feared--and that was life at Jojos. 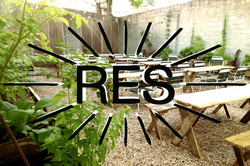 2) The Franks on RES in Red Hook: Damon Boelte sits down with his Prime Meats and Frankies teammates Frank Falcinelli and Frank Castronovo about the kind of liberties chefs, bartenders, and front-of-housers are enjoying at RES, their new outdoor dining/residency space on the Red Hook waterfront. On the unique atmosphere they are creating for this "artist residency for chefs":

It's a no-charge basis for the residency. For a chef, even the greatest chefs, to stay in Brooklyn, so close to Manhattan, amongst their peers. Being able to receive people, not have to be stressed out by restaurant-running--it's great for the chefs and its great for the population of New York that are interested in that sort of thing. 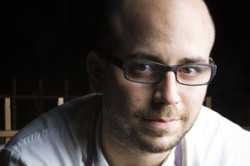 3) Williamsburg Pop-Up Chez Jose: Michael Harlan-Turkell of "The Food Seen" sits down with Chez Jose chef Jose Ramirez-Ruiz about bringing vegetables to the forefront of his cooking at his two-night-a-week pop-up in Williamsburg's Whirlybird Cafe:

We started cooking vegetables the way that I've always been told to cook vegetables; you glaze them in butter or you roast them, and then you simply serve them. Eventually we started realizing that that isn't enough. From that we moved onto cooking them like a piece of meat. Right now we're trying to create vegetable preparations in which we're putting the emphasis on every single step of the process, just like you would with meat, anything from marinating to cooking, to resting, to carving, to serving on the plate. 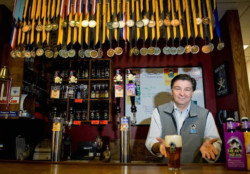 4) Craft Beers and Cask Systems: Jimmy Carbone of Jimmy's No. 43 and host of "Beer Sessions Radio" presides over a packed studio of beer experts, including Garrett Oliver of Brooklyn Brewery, Dave Brodrick of Blind Tiger, and the folks from Pine Box Rock Shop in Brooklyn and Heavy Seas in Baltimore. Here's Oliver on the difficulty bars face today when trying to include cask beers, which typically don't keep beyond a few days, on the menu:

The proliferation of the craft beer movement, ironically, is kind of what makes cask beer more difficult from a commercial point of view, because, if you go into a place and there are thirty beers, well we want thirty beers, but this is kind of a new thing. If there are thirty beers, then that [cask] beer has to compete with everything else, and it might take five days to serve it out, so I think that we have to balance the idea that we would like to taste this beer against the American idea that we want a level of both variety and service. 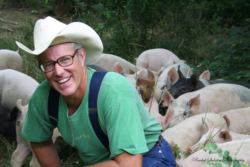 5) Joel Salatin on the Aging Farmer: Severine von Tscharner Fleming, host of "Greenhorn Radio," talks to Polyface Farms' Joel Salatin--of Omnivore's Dilemma and Food, Inc. fame--about the epidemic of the aging farmer, and the hope that he sees in the small, but growing, crop of young farmers:

I don't think there's been a time in civilization when the age of the average farmer is 60 years old. It's roughly sixty in most of the developed world?this is a worldwide issue of the aging farmer. From a business standpoint, any time the average practitioner in an economic sector is older than 35, that is an economic sector that is in decline. Of course, we haven't seen an average age of 35 in the farming sector in a very long time?If the young people can't get into farming, then the old people can't get out!