It's high summer now, and life in the Hamptons is in full swing. With weekend getaways in mind, here's a roundup of all the food news from Eater's sister site Curbed Hamptons this week. 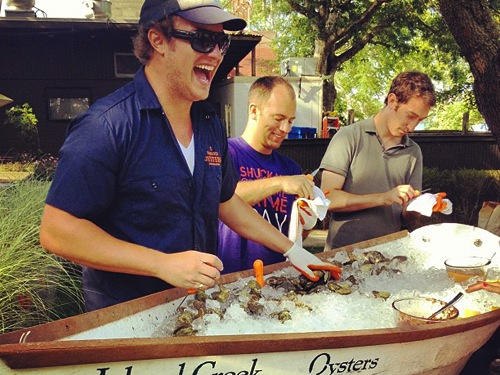 Curbed Interviews: Dario Wolos, whose Montauk taco spot La Brisa is an offshoot of Tacombi at Fonda Nolita, talks to Curbed Hamptons about taco culture and the difference between the Hamptons and the city. More than just having fresh fish, he says the Hamptons are actually more like Mexico than Manhattan is. "Things in the city move at a very fast pace; Mexico's not that fast..."

Riverhead: For the chance to drink rare wines in the vault of an old bank, theRIVERHEADPROJECT is hosting a series of four special dinners over the course of the summer. The meal is $80 per person, and involves dishes like Mangalitsa pork chops and foie gras ice cream paired with hard-to-find wines. All of it takes place in the restaurant's underground vault, which is still lined with the safety deposit boxes of the former bank.

Wainscott: Georgica Restaurant recently celebrated its fifth birthday, no small milestone for a restaurant in the Hamptons, where a lot of places only stick around for a summer or two. Curbed Hamptons talks to the restaurant's executive chef Seth Levine about staying profitable and having to balance being a restaurant and being a late night hotspot as the the "inventors of the one-stop shop experience out in the Hamptons."