Share All sharing options for: A Visit to Coney Island Institution Totonno's

Totonno's isn't really an appropriate candidate for this column. It's not dusty and forgotten, or even slightly neglected. Who goes there? Everyone, all the time. Locals and folks from all over the five borough, Jersey and Long Island. Tourists visiting Coney Island, Food Network devotees and pizza fanatics making pilgrimages.

But Totonno's has had a hard time of it lately. First a fire knocked it out for a time in 2009. Then Sandy put it out of commission for five months. The place is a phoenix, though, and the Balzano-Ciminieri clan—descendants of found Anthony Pero, who was trained at Lombardi's in Manhattan—reopened again in March. So I figured they need all the ink they can get. But maybe not. The young man who brought me my pie said they have been busy ever since reopening. "Memorial Day weekend was packed."

A recent visit found the place looking like it always does—spare, spic and span, an elemental, nostalgic vision in white and black. The walls are still adorned with coathooks, oval mirrors and dozens of framed press clippings, seemingly half of them from the Daily News. The owners must have spent a lot of money on frames over the years. There's a large standing fan, and a ceiling fan. The tile floor is apparently new, but looks old. So are the red table tops, but they blend in. The restroom is still small, and you have to wash your hands in an industrial sink in an alcove nearby. 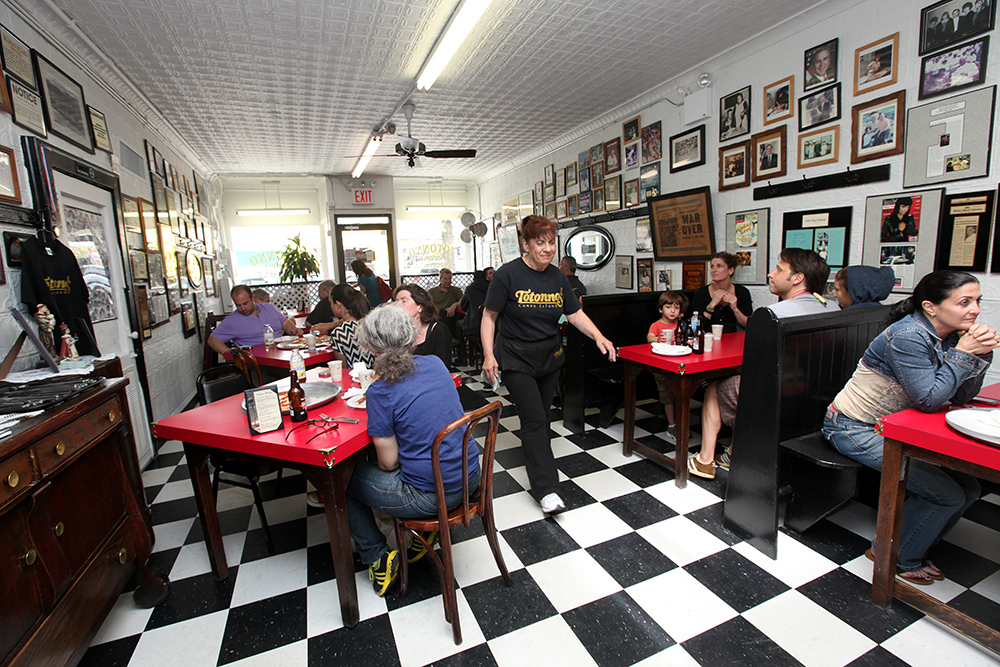 The pizza, too, hasn't changed: the crust thin, yet sturdy, and delicious on its own; the subtle sauce and fresh cheese existing in perfect harmony. It's my favorite pie in New York. It's a pizza, however, best eaten hot and, since it cools quickly, should be finished within 10 minutes of hitting the table. A cold Totonno's slice eaten on the subway back home is still tasty, but the magic is gone.

The formidable Cookie Ciminieri still waits on, and clears, tables. The recent calamities seem to have aged her, but she still possesses enough spunk to rush out onto Neptune Avenue and wave some European backpackers back when she thinks they're shortchanged her. First-timers are easy to spot at Totonno's. They take pictures and spend a lot of time reading the articles on the walls. The truly unschooled will walk up to the aluminum, art deco counter in back, thinking that's where you place your order. One young couple actually asked Cookie what the pizzeria's wifi password was. (I was stunned to find out that the place actually has one.) Everyone was drinking little glass bottles of Coke, little glass bottles of Sprite, little glass bottles of wine.

To get a sense of the pizzeria's regulars, you have to go for lunch on a weekday. Locals will declare themselves by casually walking in, giving Cookie a quick wave, and seating themselves wherever. Very often, these are older men. Gold necklaces are not uncommon. One such twosome order a couple of pies between them, a margherita and a white pie. The white pie is not on Totonno's bare bones menu, which hangs at the back of the pizzeria. You have to know about it, and some regulars think it's the best thing the kitchen does. Certainly the two men did. I'd never had the white pie myself. As I was getting ready to go, I asked them whether they thought of it. "The BEST!" said one, barely looking up. "Have a slice," said the other. Really? Really. I thanked them, grabbed a slice and left. It was good.