Share All sharing options for: New York Chefs Discuss the Tyranny of Entrées

Can something as seemingly accepted and innocent as an entrée stifle a chef or mislead a diner? In recent months, several chefs and writers have argued that for both the person cooking and the person eating, tasting plates are better than entrées: they allow the chefs to be more creative, diners aren't stuck with large portions, and restaurants don't have to worry about pricing an item in a way that comes off as too aggressive. So, is the entrée tyrannical, as Wylie Dufresne playfully explained in a recent interview, or should there be a place for both approaches?

What are your feelings on the debate over the "tyranny of the entrée"?
I didn't realize so many chefs felt tyrannized by entrées. I mean, "tyranny" is kind of a strong word for what is. At the end of the day, it's just something that's supposed to be delicious.

Have you ever considered shifting to small plates?
It never crossed my mind not to have entrées. I know people like tasting menus and restaurants are becoming more and more like Broadway shows, where the meal is a performance, but 90 percent of people in North America think "appetizer, entrée, dessert." It's just a fact of life. I mean, I wish cars were actually flying unicorns too, but they're not.

Can entrées thwart creativity or pose any type of challenge?
They pose a challenge, but it's a good challenge and one that pushes me to be more creative, actually. Having to make a vegetable entrée which is satisfying, and where the vegetable is the center of the plate, without resorting to some kind of fake meat replacement isn't always easy. Occasionally I'll come up with something small and awesome and think, "I really, really wish I could just put three of these on a tiny plate and call it a day," but I don't think my customers would be happy with that.

It's also fun to think of how to be creative within the confines of a single dish and how to get a lot of tastes in there without boring the customer and without sticking on too many bells and whistles, so that it ends up collapsing under its own taste. So, I have to push myself, which has made me a better chef. It's made me try things that I never thought I'd try before. The small plates — those work for a lot of people but for me, at Dirt Candy, doing them would be too easy.

How do you feel about entrées?
I'm very much with people like Wylie. It's tough to sell someone a giant plate of anything, really. It's always difficult to serve any one person a large portion of food on a single plate and also have it physically look elegant. That's one of the big challenges of it for me.

What are the others?
The other big concern is the idea of diminishing returns. After the third or fourth bite, you can get bored of it. Also, elements on a large dish might not be as well seasoned as something that's smaller and more manageable. So, the diner's experience with the dish could differ, could dip, as he or she eats it.

How would you describe how you do things at Pearl & Ash as far as small plates versus entrées?
We sort of applied the perspective of how we like to eat: we like to try everything, and in smaller portions. We like to sample as much as we can. That being said, we do respect the people that want to have the three or four course meal. In order to not alienate those people, we offer some large plates to accommodate them.

If it was my choice exclusively, I would definitely be inclined to serve only small portions.

Is it difficult to justify prices for smaller portions or to find that sweet spot where you make a tasting plate seem reasonable or even generous?
It is definitely difficult at first to engage that price and quantity game, but if you look at our menu, we really don't charge that much for any of our dishes. We wanted to make it extremely accessible and reach a broad audience. You can't please everybody, but we try to reach as many diners as we can. And I think with the prices that we charge, we subtly encourage people to eat more diversely.

Furthermore, if you look at our prices and then look at the tasting menus of more traditional fine dining restaurants, you can pretty much figure out that we're in a similar window. They'd charge more or less the same. I'd even venture to say that our portions are bigger than those.

Can you talk about how you've approached the balance between entrées and small plates at your restaurants?
We removed main courses from the menu at Cocina for a host of reasons. Actually, before Cocina, we actually tried to have them for a spell at Taqueria. We removed them from there for the sole reason that people weren't getting to them. They were buried beneath the tacos, so people would either never order them or, when they did, often cancel them because they were too full.

At Cocina, we removed them for a few different reasons. First off, at the end of the day, Mexican cooking isn't a protein-centric cuisine. Also, if I'm building a dish and have to put eight or so ounces of protein on it, I find it limiting aesthetically and several other ways. That's not to say that I'm not interested in putting a big awesome steak on the plate. But feeling the need to put a starch garnish and a vegetable garnish seems a lot like basic culinary school.

Can you explain what you mean by that?
The first class where you cook at the CIA is the one in which you identify your protein, put two vegetable garnishes on the plate, and then a starch and a sauce. That's the fundamental way they taught me how to put a dish together. That's not to say there aren't beautiful main courses out there or chefs that are freakishly talented at doing that, but I just decided based on my background that that was stifling.

I can only talk about myself and far be it for me to dictate what other people should do, but I just felt like you could end up looking at your menu as a kind of color by numbers process: you have a red meat, then an alternate meat for someone that doesn't eat red meat, a seafood thing that's a white, flaky fish, a seafood thing that's a crustacean, et cetera. Again, there's no morality in this and it's just food. I order main courses at other restaurants all the time, but I just don't enjoy cooking them or having them take up slots on my menu that would otherwise be filled with something tastier.

What are some situations where you do like main courses or think they work particularly well?
It has to do with a restaurant's style and clientele. If you're a Midtown restaurant that does power lunches, you're not going to have to tell two guys that they have to share their food. One guy may want one thing, and the other may want another thing. First dates are another good example of this situation. To accommodate situations like that, we had to keep tacos on the menu, since people tend to see them as main courses. So there is flexibility in both directions. We've tried to go with either/or before, but we've realized that that usually alienates one of the camps.

Honestly, though, I don't think a creative main course is a common thing. If pure creativity is your goal, I don't think main courses really facilitate that. Because of the fact that after two to four bites a dish becomes superfluous, you either have a tasting menu only place or a restaurant that emphasizes small plates, so people craft their own experience. wd-50's recent change is a good example of what we're talking about. But there are places that are perfectly admirable and wonderful that serve plates that are delicious and meant to satiate people.

But I can't emphasize enough the fact that I didn't make these choices because I think other restaurants should follow. I did these things because they made sense for me. 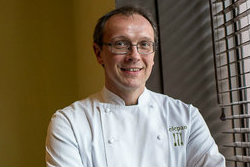 What do you think of cooking entrées?
I still really like the idea of entrées. I still think people enjoy them — the idea of having an appetizer and an entrée. As a chef, I enjoy creating that way, as well. The new restaurant I'm opening isn't geared toward that, but some people don't like the small plate or tasting menu idea. It doesn't have to be one or the other.

What about the idea of diminishing returns? Some chefs say that a dish becomes less exciting after the first couple of bites.
I don't think that's necessarily true. You can make something where people want more and more and it carries throughout the entire experience of the dish. I actually think that what can happen with a small plate is that you get one little taste and that's it. Sometimes, you just want more of it.

Also, I think it's wrong to think that an entrée is one-note. You can have bites that vary throughout eating the dish, where you pair different components in different bites. An entrée can change in an exciting way as you move through it.

The point is, you just have to make it interesting! If you do it well, it works, and it's just as creative. I know there's a want for both sides, and there's definitely room for both. At Telepan, I'd say that we do 50/50 between the tasting menu and the app and entrée format. And soon, I'll have a small plates restaurant. I just don't think we should go against either one.