Share All sharing options for: Reviews for Lafayette, Betony, Uncle Boons, and More

As noted yesterday, Pete Wells thinks that Andrew Carmellini's Lafayette deserves one star: "As for the food, there are salads and charcuterie and oysters and shoestring fries. Almost all of it is worthy, but very little seduces you. Lafayette wants you to fall in love with it, but it tries too hard in some ways and not hard enough in others. It's a restaurant that is a little too easy to place in the friend zone." [NYT]

Joshua David Stein likes the modern American fare at Betony, the new Midtown restaurant helmed by EMP veteran Bryce Shuman. "The Chapel Hill-born Mr. Shuman has put himself out there in nearly every dish. He summons the humble Southern ghosts of Saturday lunches with his father in the "tuna melt" ($12). In Mr. Shuman's hands, the sandwich grows up. Wonder Bread is replaced by a small disk of butter-toasted brioche. Tiny tins of tuna are swapped for a thin slice of sushi-grade. Homemade chive mayonnaise stands in for Hellmann's, and an almost vaporized broiled fontina plays the part of Kraft's pasteurized cheese food product." Stein also applauds the service at the restaurant. [The Observer]

Michael Kaminer is impressed by the food coming out of Dave Seigal's kitchen at Cull & Pistol in the Chelsea Market: "Seigal really catches his wave with mains. A dazzling trio of fish tacos ($19) made up for every soggy, sour rendition I've suffered of this Baja cliché. Here, firm grouper gets dusted with achiote, set on smoky chipotle cream atop homemade tortillas, and topped with vibrant red cabbage and radish. Spicy, sweet, crunchy, and chewy all at once, they're a riot of flavors, and fun to boot. Skinny, crispy fries ($6), dusted with salt and steaming-soft inside, pair perfectly with the tacos." Four stars out of five. [NDYN] 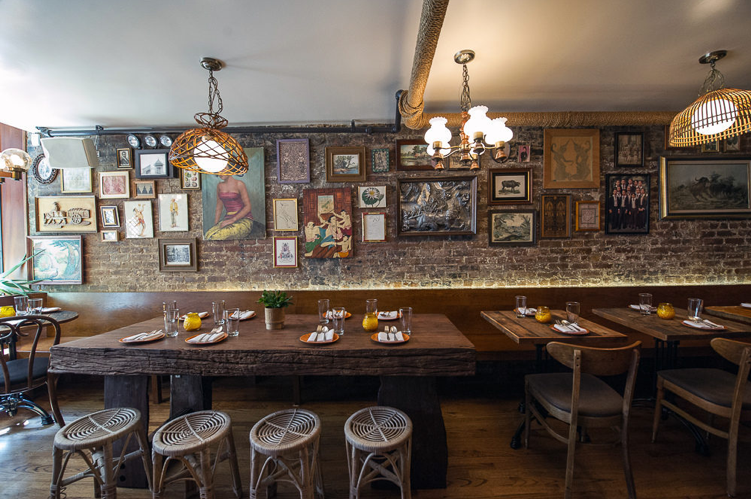 Ms. Gael Greene is intrigued by Uncle Boons in Nolita: "Mee krob with sweetbreads is daring and delicious. The battered nubbins are fried and served with crispy noodles, peanuts, dried shrimp, grassy sawtooth leaf and tamarind sauce. And what is this? 'A gift from the chef,' says our waitress. Spicy roasted chicken and banana blossom with crushed cashew, crispy shallots and a serious afterkick. It's our favorite dish." [Insatiable] 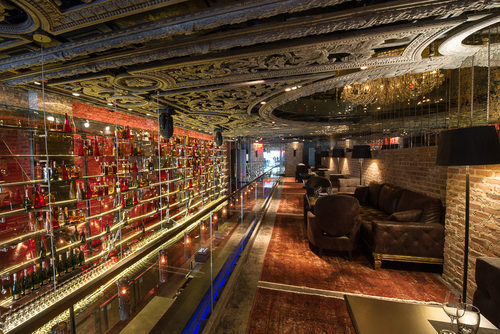 Ryan Sutton likes a few dishes at Manon in the Meatpacking District, but most of the menu falls flat. Service is also an issue: "One of Manon's central problems is that the staff isn't familiar with the basic steps of service that make things easier for the diner and that make the staff seem invisible rather than intrusive. A salad ordered as an appetizer mysteriously appears as a side dish during the main course. My companion asks for water, one glass is served. What about me? Oysters arrive vaguely warm, without cocktail forks, so you end up with a mouthful of rock salt covering the bottom of the bivalves." Sutton gives the restaurant half a star. [Bloomberg] 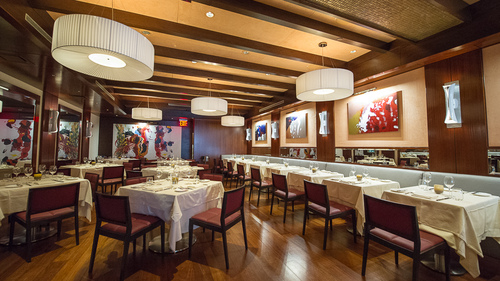 THE ELSEWHERE: Ligaya Mishan recommends Hunan Manor near Grand Central Terminal, Hannah Goldfield is surprised by how delicious the food is at Alder in the East Village, Restaurant Girl is floored by her meal at Costata, and brand new TONY critic Daniel S. Meyer digs the vegan Japanese fare at Kajitsu in Murray Hill. 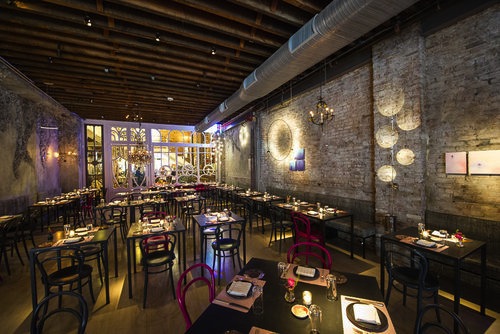 THE BLOGS: Serious Eat editor J. Kenji López-Alt likes the food (but not the scene) at ABC Cocina, Chekmark Eats has a good meal at Waverly Inn, the Immaculate Infatuation boys give an 8.5 rating to Carbone in Greenwich Village, the Food Doc is pleased with his meal at Thirty Acres in Jersey City, NYC Foodie raves about the Tuesday night brisket at Ducks Eatery, the Pink Pig has a satisfying (if unremarkable) meal at Sauce, Joe DiStefano likes the unusual ice cream at Oddfellows in Williamsburg, Brownie gives a big thumbs up to the onion rings at Shopsin's, and NY Journal has a solid meal at affordable new French bistro Cantine Parisienne.
· All Coverage of Reviews [~ENY~]