There was a lot of Cronut news this week, so let's get right to it:
Cronut Line: The Legend Continues:
Here are the best Cronut line shots of the week.

[The new line of Cronut merchandise from Cool Culinaria]
Cronut Mania has reached the U.K.: A restaurant in London called Duck and Waffle announced plans this week to add them to the brunch menu at the end of the month. Back on American soil, the owner of Sweet Bakery and Bar in Worcester, MA claimed that she invented the croissant-doughnut hybrid ages ago, but her version is called the dosant. She told the Boston Herald: "We've been doing it for years...I'm not saying I invented the wheel, but there is good food outside New York." And, here in New York, Flo Fab reported that Mille-feuille in Greenwich Village added a Cronut knockoff to the menu called the "French donut." Eater National has a list of more new copycats from around the world. 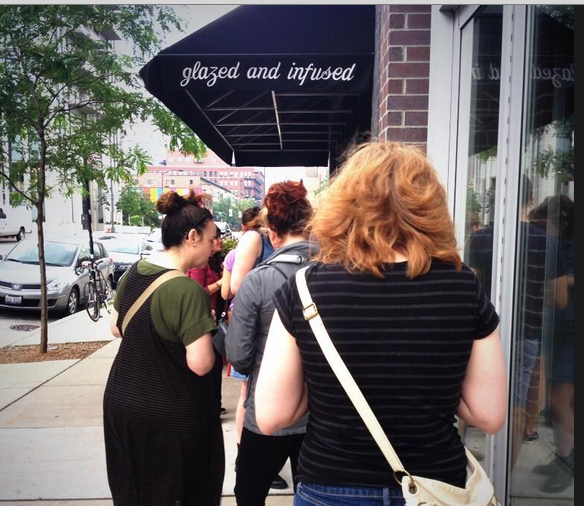 And in case you're wondering, people line up for the Cronut knockoffs, too. Here's a picture of the line outside Glazed and Infused in Chicago this morning. The bakery started selling a version of the pastry earlier this week.

Gail Simmons, who hosts a show about desserts, broke her silence about Cronuts this week:

The Cronut chaos erupted after I had left New York City. But I do know the Cronut. Dominique Ansel, who invented the Cronut, is an alumni of Daniel Boulud, and I worked for Daniel Boulud too, so I have known Dominique for a long time. He really is one of the most powerful and talented pastry chefs in America. Look, everyone loves a craze, and this is kind of the new thing. It's sweet and it's buttery and it's fried: I mean, what can be bad? But people are getting a little crazy. It's just a piece of dough, for God's sake. Calm down!Gail should try a Cronut, already. The Momofuku Ko crew eats homemade Cronuts before the guests arrive. From chef de cuisine Sean Gray: 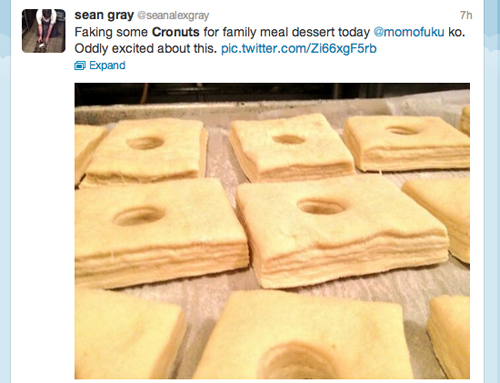 Heavy Hangs the Head That Wears the Cronut Crown:

Let it be stated for the record that Dominique Ansel is doing an amazing job of dealing with his customers, the press, the scammers, and the scalpers that pass through his Cronut Kingdom. The dude never loses his cool, and he sticks to his guns about customer service and Cronut purchasing protocol. But it's not always easy. On Thursday, some hooligan physically threatened a member of his staff: 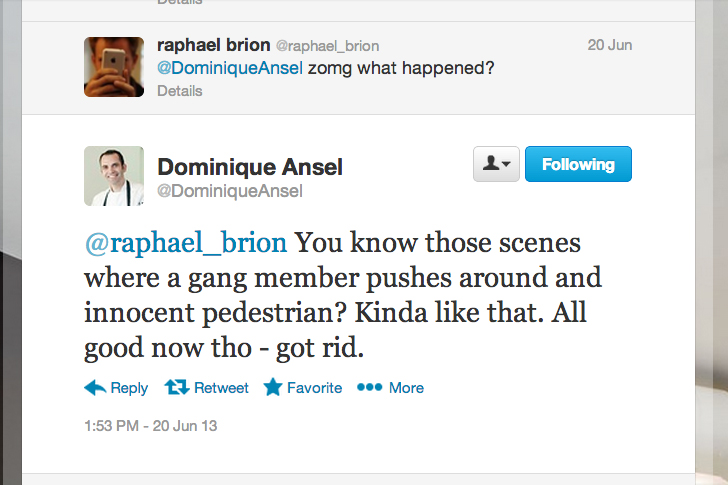 In a Twitter chat with Eater's Raphael Brion, Dominique Ansel also noted: "For the moment, I am the bouncer. And barista, professional bagger, plumber, electrician, and chef. Still smiling. :)" Cronut production was slightly delayed yesterday morning due to a "little mishap," but Dominique Ansel greeted the people waiting in the Cronut line and handed them Cronut vouchers. 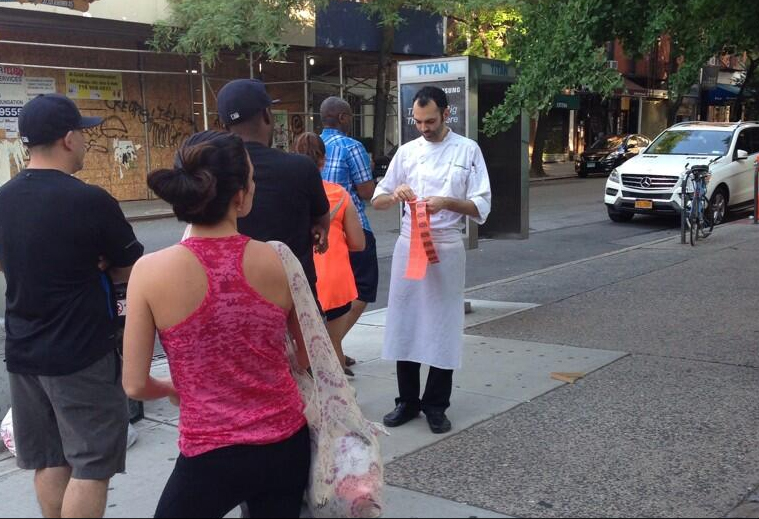 Everyone eventually got their Cronuts. DA saves the day, yet again.

In a chat with Bloomberg Surveillance, Ansel explained why he would not raise the price of his beloved treat: "I think I have to be fair with my customers. This is the price I set. It won't be fair to my customers to increase the price because there's a high demand...I want to sell a good quality product for a fair price." 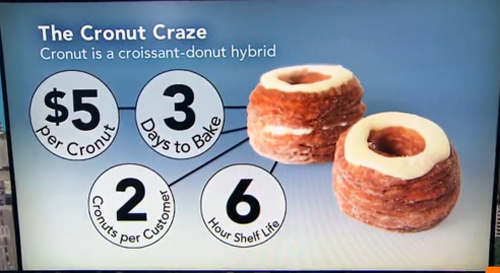 [An infographic from the Bloomberg Surveillance clip]

Getting a Cronut is now easier than ever thanks to recently-introduced pre-order and large order service. From the official Cronut 101 page on the Dominique Ansel Bakery site:

Cronuts Will Outlive Us All: 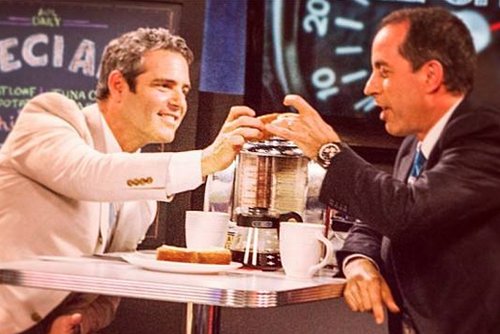 [Andy Cohen and Jerry Seinfeld Eat Cronuts on TV. Photo: Facebook]
Here are some assorted links from around the Cronut Universe:
· Dominique Ansel's Top Five Rules About The Cronut [BB]
· Cronut a Worldwide Sweet Sensation [The West Australian]
· Psychic Sonya Predicts Cronuts Will Be the Next Big Thing [TOL]
· The 'Cronut' Comes to Tampa [TBT]
· A Chat With Cronut Creator Chef Dominique Ansel [Huff Po Live]
· Ask the Critic: Are Cronuts Worth the Line? [SENY]
· Would You Wait 2 Hours for This? [NYP]
· Cronut Craze Continues As Line Winds Around 'Crorner' [Villager]