Cronut Mania gets stranger by the hour. This is absolutely the New York food fad of the year, and there were some major developments in the world of croissant-doughnut hybrids over the weekend. Here are the vital updates:

· Cronut King Dominique Ansel changed the direction of the Cronut line. Instead of snaking around the corner and up Sullivan Street, it now winds east on Spring Street and up Thompson Street. As you can see from the photos above, the early morning lines are getting longer every day, and some people are even bringing chairs with them so they can cool their heels as they wait for Cronuts.

· According to a report from the Agence France Presse, some Cronut enthusiasts line up around three in the morning, although Ansel refutes this claim. On one recent morning, a customer sold his place at the front of the line to another customer for a cool $100. Even if you show up at 7 a.m., you might only stand a forty percent chance of getting a Cronut.

· Ansel offers a message to the media: "Dear camera crews - please don't show up unannounced. You will not be let in as it interrupts our cooking and customers. Hope u understand."

· Cronut knock-offs were spotted on the menu at The Gallows in Boston.

· Someone in the Miami-Dade area is selling some sorry-looking knockoffs on Craigslist for $4 a pop: 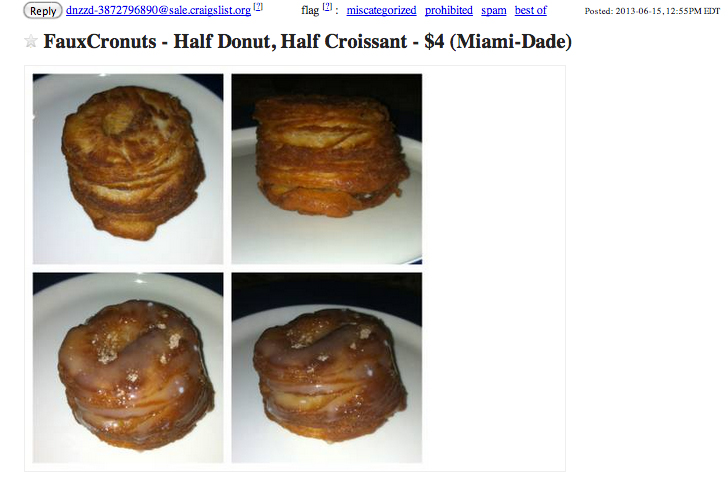 From the post: "From the popular trending 'Cronut' first introduced in Soho, New York by Dominque Ansel. Comes my take on the half donut half croissant. I sell them for $4.00 each in a box of 4 with a 3 day waiting period due to the process it takes to make these."

· Questlove is begging Jimmy Fallon to get Cronuts on Late Night. Don't be surprised if you see Ansel playing beer pong with Jimmy on TV later this week.

· And, finally, pre-ordering for the week of July 1 begins today at 11 a.m. Ansel notes: "Please don't try to call a minute ahead and stay on the line...we'd make u call back."
· All Coverage of Cronut Mania [~ENY~]