1) Teaching and Baking with Hot Bread Kitchen: HRN's Daniel Meyer talks to Robin Burger of Hot Bread Kitchen, the bakery and small business incubator, about their goal of teaching women from immigrant communities how to bake and sell delicious bread and, essentially, how to run a business: 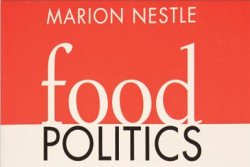 For me, the really big one is to count the number of food studies programs at universities, because when we started Food Studies at NYU in 1996, there was one other place that had something remotely like it, and now every university is doing some kind of food program?and that reflects the really big change which is the enormous interest in food issues that has occurred since then. 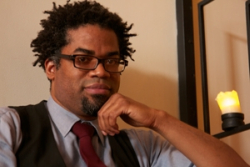 3) Bartending to Branding with Charles Hardwick: New York native and bartending veteran Charles Hardwick talks about the sincerity of consulting and representing spirit and how a career in bartending laid the groundwork needed for doing the job honestly. Damon Boelte of "The Speakeasy" talks to Hardwick about proper bartender and guest behavior, changes in the bar scene, and some of his favorite cocktails. Here's Hardwick on his decision to become a bartender:

I started off as a busboy, and then I quickly became a food expeditor, and very I was looking at the bartender and I was like, this guy has the best job in the entire restaurant. They just seem to be the person who, you know, they're just dispensing drinks, but they're really in control of their environment, their working environment, and that really appealed to me. I also realized that guests treated the bartender with much more respect and there was a different dynamic there, and to me it just made a lot of sense. 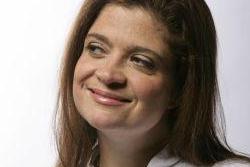 4) America's Next Iron Chef Alex Guarnaschelli: Alex Guarnaschelli is a woman of many titles: Iron Chef, Food Network celebrity, and chef at New York's Butter and The Darby. She sits down with Dorothy Can Hamilton to talk about growing up the daughter of cookbook editor Maria Guarnaschelli, and to discuss the important role competition has played in keeping her going:

I like the competition shows because they show the human side of people, that they are fallible, make mistakes and they crave being a hero, they crave finding a hero. Even an Iron Chef is kind of a hero, for me. Watching Morimoto make sushi that looks like a stained glass window in a church is just a memorable moment?I think that when you go on television you have to to some extent accept that people are going to pigeonhole you or see you in a certain way. I can't really worry about that provided that I'm ok with who I am and what I'm doing, which is a tough audience, the toughest. 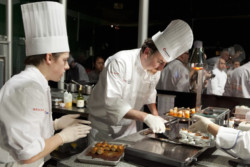 5) CIA Student Protests over Changing Academic Standards: CIA graduate Will Sears and Barbara Lang, formerly of Cornell's School of Hotel Administration, have a spirited debate about the importance of the shifting focus and standards at the Culinary Institute of America. Here's what Sears has to say:

One of the arguments is that it's diluting the value, so it's not so much the three fingers pointing back at myself, it's that the university might be sending people out into the world that are less prepared than I am, and they make us all look less valuable.

I don't agree with that, I believe that a person that is committed to their education is going to be able to thrive, and those that are graduating who were not as engaged, they do not have those same skills, but that's in any university or vocational school. It depends on the involvement of the student. 'Vocational' is not a dirty word. Part of the problem in this country is that you don't value people who have a certain learned skill, so that word triggers bias immediately.