Chef Daniel Boulud on French Cuisine and His Legacy

Share All sharing options for: Chef Daniel Boulud on French Cuisine and His Legacy

In the concluding portion of this interview with Daniel Boulud (see the first installment here), the chef talks about how New York's dining scene has changed over the past 20 years, the importance of French cooking ("it is a way of life," he argues), how he maintains quality and a sense of soul throughout his empire, and what he's thinking about in terms of the future and, more importantly, his legacy. Here's the conversation:

How do you think being a chef today in New York is different from when you opened the first Daniel, both in terms of the dining scene and dealing with the media?
I've always thought this was the most exciting city to be a chef. That was the case back then, and it's still like that now. But many things have changed. One thing is that there has been such a big stream of young talent that has changed the dining scene so much over the last 20 years. There is a whole new breed of colleagues, of chefs, who are very promising.

It's very hard today to offer an exclusive scoop on anything. In the old days, we could basically hold something for someone, and that person would own the story and announce it in a paper or magazine. Today, with social media, it's almost an instant spreading. But I think it's also very exciting.

I don't think the business is much different, though. People knew where to go, what to do, what was going on, but now you just have more channels to find that out. And in general, there is more choice and variety.

I'd like to talk about French food with you, and to ask how you react to critics who say that classic French food is no longer as relevant.
Yes, I've heard those criticisms, but for me, that's never been the case. My customers never quit on me, either. French food, like Italian food, is a way of life. When you look at American food today, you're seeing how there's more of an emphasis on food and how good food can be a way of life. That is very French. So, for me, cooking French — I always think French. That doesn't mean that all of my food is strictly French, but I like to always think about the fundamentals of balance in taste, seasoning. Cooking with vegetables has always been very important to me, and creating a marriage between them and proteins is important.

I don't think I'm a trendy chef, but I don't think I've been doing things where I will fade off, either. You can eat French food every day. It doesn't have to be Daniel. Italian food is very much in that vein. It's seasonal and market driven. There were certainly mistakes made in the evolution of French food, especially in the higher end restaurants, but the soul and base of it have always been there and have always been valuable. There is too much history and richness there for it to become passé. In French cuisine you have the gastronomic cuisine — the restaurants and the chefs — but also the boulangerie, the charcuterie, the pâtisserie. Every trade in France is taken so seriously. There is a real appreciation for all levels of craftsmanship.

You have brasseries, bistros, cafés, bouchons. But you also have the cuisine bourgeoise, which is home cooking at the highest level. And then you see the beautiful differences from region to region. It's so vast that it doesn't stop inspiring me. So I tell the people that work here that we need to think French and cook French. At the same time, though, the French were travelers and there were the colonies, so that can come into the food at all my restaurants. Not to mention that my chefs de cuisine for 15 years were Asian, so we would play around a lot.

How was the food at Daniel changed over the years?
The first Daniel was a blend of country French and city French. I could do a whole head of pig or tripe, so I had a lot more freedom than I do today, when I have all these bistros where I now do those things. I love that country cooking, those old recipes, the soul food of France. I always practiced that at Daniel, but little by little, we passed that along to the others. The other thing we really pushed, especially as we opened Bar Boulud and DBGB, was developing charcuterie. The Italians do amazing things with salumi, but there was a need for ballotine and terrine and things like this, which are very French. We now do over 60 items in that category. It's about the craft, which I really, really care about. 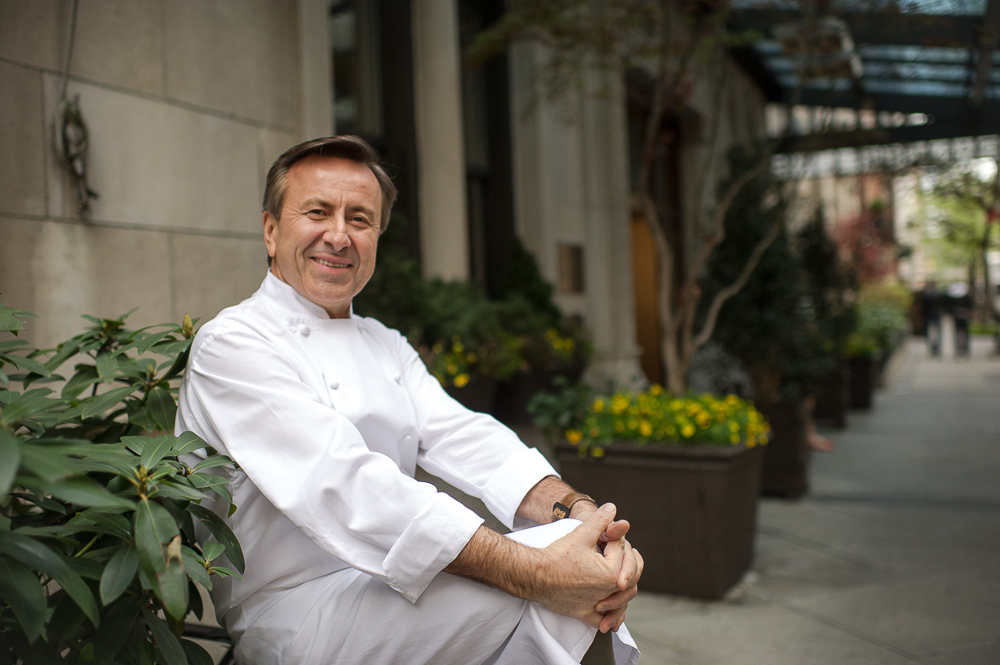 When you talk about French food, you suggest it has a lot of soul. How do you maintain that as you keep opening restaurants and avoid having it look like you're just slapping your name on the door?
Even, for example, in Singapore, the chef used to be the chef at the Épicerie. He worked at Daniel, he worked at Bar Boulud. He understands what we do. We make sure that the chefs are connected with us all the time. We have designed a program on the internet so that every chef knows exactly what is going on in the restaurant group. They get descriptions of every dish we do, and if they want the recipe, we get it to them right away. We are in constant communication, and I definitely am in constant communication with them.

We also want to make sure that the chefs are evolving independently. We don't want to just slap down a menu and have them do it over and over again. We do guide them and occasionally veto certain things, but every chef and every manager is responsible for their own restaurant. They are responsible for the payroll, the food costs, having a restaurant that is well maintained. It's obvious, then, that we have control and can lead the chef, but at the same time, we create conditions where the chef can distinguish himself. I think it's a lot better to have a restaurant where it's a little bit of me and little bit of the chef instead of something where I am the overwhelming force. I think that works and gives it more feeling.

Do you think about your legacy?
I really want to keep working, because I still haven't figured that out yet fully, what I want that to be. I do want to keep inspiring and keep inviting young people to join us here. I like to see them grow in the infrastructure. When I started, you had a few chefs who had several restaurants and maybe a bit of consulting, but it wasn't like now, where there are management groups and bigger operations. Now it feels like more of a partnership between me and my chefs. Years ago, you would work in a restaurant and there wasn't any opening to move up, really.

A lot of chefs complain about how hard it is to retain young cooks. Do they still want to come cook at Daniel?
Yeah, very much, yeah. Many of them like to train and move on, without realizing that wherever you plant your roots, that's where you will grow. If you keep moving, that becomes harder. But we have wonderful talent. The talent sometimes is green, but they are passionate and ambitious. You can teach a lot to them. And they love the French food. Chefs, especially young cooks, tend to love complexity, but we like to emphasize here the idea that simplicity — and understanding that the equilibrium between the food and the wine — are very, very important.

Back to the legacy question.
I know I don't want to open too many more restaurants. Maybe I want to focus on one concept and grow it more from here on out, since it might not be complicated and fit in many communities. I've been thinking about that. More and more, we try to do it ourselves without going into partnerships with hotels and things like that.

I want to be remembered as a chef who had an impact on one or two generations. I look at these books of Delmonico and the Waldorf-Astoria, things from the turn of the century, and I see that these are now important reference points. I would like to be like that.