Brandon Duff, Head Bartender at the Lounge at Atera

Share All sharing options for: Brandon Duff, Head Bartender at the Lounge at Atera 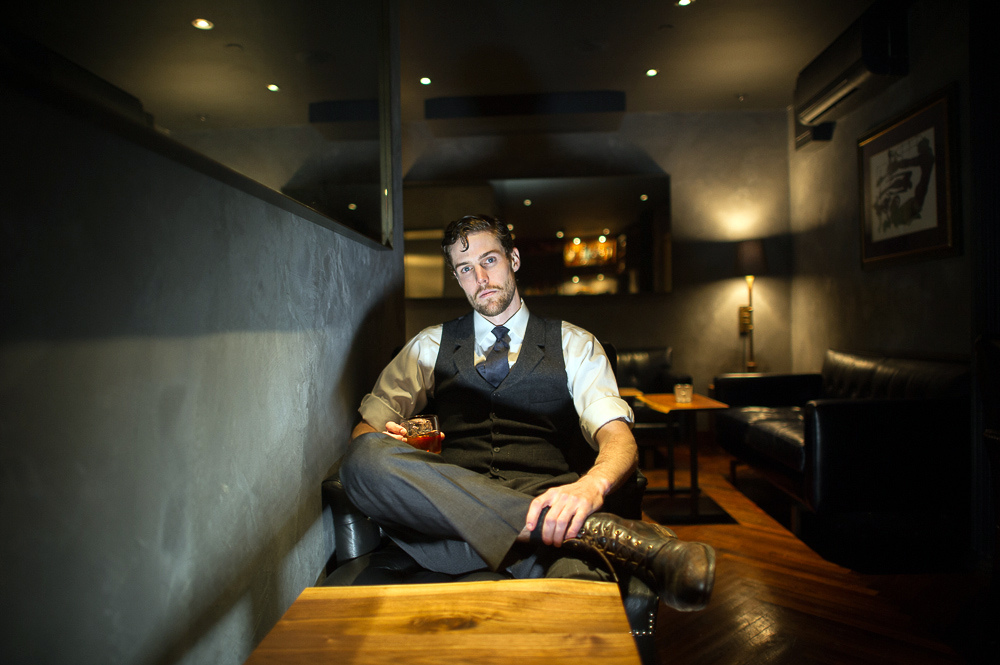 Atera, Matthew Lightner's two-Michelin-starred, critically-acclaimed Tribeca restaurant, opened the 12-seat Lounge at Atera in January. Located just below Atera's dining room, the tiny Lounge takes the same technically-innovative, forward-thinking approach to cocktails that the restaurant does for food. Leading this effort is head bartender Brandon Duff, who uses many of the same ingredients and tools from Atera's prep kitchen as the rest of the restaurant. A relative newcomer to the cocktail world, Duff is a longtime barista who competed in latte competitions and worked for several years at RBC, the Tribeca coffee shop owned by Atera owner Jodi Richard, before joining the bar Weather Up when that closed. In the following interview, Duff talks about joining the team at Atera, crafting new cocktails for the lounge and the dining room, and the connection between cocktails and coffee.

So how'd you get hooked up with Lightner and Atera?

So the owner of Atera [Jodi Richard] is also the owner of RBC, originally two doors down. I worked there for about a year-and-a-half to two years, and started doing cocktails at Weather Up in the neighborhood. When this position opened up and they were about to open the lounge, they approached me and asked me if I wanted to do it.

I had known them throughout the process of opening Atera. They would always come and get coffee every day, and Matt Lightner was really nice. So that's how I got involved.

And when was this?

I started here right around Sandy, that week.

How often do the cocktail offerings change?

Every month or so, or as every season changes. It's definitely more exciting around the time I'm creating new drinks. [But] I'm always kind of creating drinks, or modifying a bit?kind of the same way the kitchen works a lot too.

How closely do you work with Matthew Lightner on crafting the cocktails?

He definitely tastes everything, and he'll always have some sort of input or way to make it better. He'll try it and go "Well, this works" and we'll consult each other on every drink.

Are the cocktails in the dining room any different from those in the Lounge?

So right now we have four cocktails that are only available up here. I can make them down [in the Lounge], but obviously they're not on the menu. And the guys up here know all of the cocktails from downstairs. But up here there's not really a menu, so they're sort of spieling drinks to guests and then if the guest gives them an idea of the drink they want and one of their drinks doesn't fit that profile, I can make it downstairs and bring it up. But yeah, I design these cocktails also.

Do you do anything differently when planning drinks for the two spaces?

Definitely trying to make them a little more nuanced and delicate upstairs, so they're not overpowering the food and taking over the flavors that are in the dish.

Are there any tools that you now have access to that you're especially excited to be using, or that you go to the most often or have been the happiest to learn to use?

Yeah, just for an infusion's sake, I've been using the GastroVac a lot?it's like a vacuum pot, so conceptually I can create the vacuum and then I can steep things, boil things at a much lower temperature, so when you're extracting you're not getting a lot of the harsher [flavors]. So like geranium, for example, I'm not pulling out a lot of the bitterness, but I'm getting the aromatics and things I want to grab. And now I'm using it for a beet cocktail. It's gin, and I infused it with beets?very earthy and kind of dirty in a sense?but then I used rue, which is a very bitter herb but has great aromatics, and so that gave it its floral aspect. And I used a little cardamom in there too. 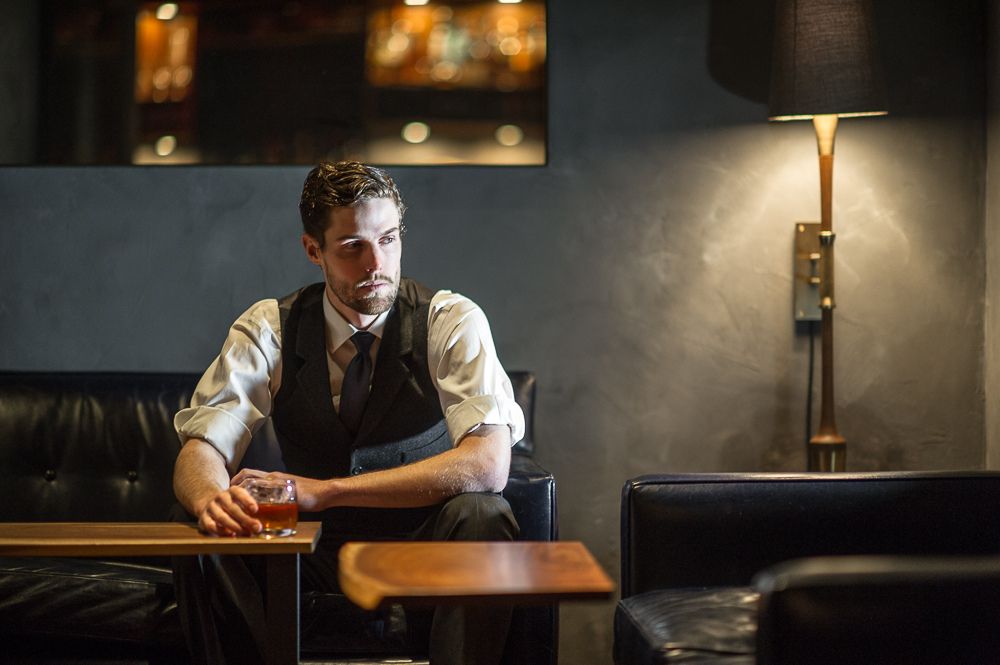 All of the drinks I have a sort of liking for, I guess. But yeah, there are a lot of them that I'll drink regularly. The Sap has got bergamot, lime, gin and a little bit of pine sap floated on top, and that's very dry, especially with the bergamot. We're juicing the bergamot whole, so you're getting a lot of oils from the pith of it. So that's a pretty different cocktail, and that's sort of what I'm going for here.

At Weather Up we were doing mostly classic cocktails, though there's some modern classics, like some of the Milk & Honey drinks. I'm using my knowledge from that, and using other ingredients that I have available to me here, and making something different. Something like the Sap, you're not going to get bergamot pine sap at most bars around the city. So that's one. And the beet one is really good.

Through the experimentation process, have there been any really noteworthy misses? Have you created anything awful, that was just obviously not going to make it onto the menu?

Sometimes, especially with that kitchen, we get a little ambitious. [But] a lot of them, if they're misses, they're not too far off. We have a pretty good overall picture of what we're going for with the drinks. We're like "Oh, well that didn't work," so we'll add a little more of this. We'll adjust it. It's the same thing when Matt's creating a dish for the season up here, it's never straying too far from what he's going for.

When it opened, I was actually doing a lot of work in the dining room, and then working downstairs. Like so people would eat, and then they would want to go down there for drinks. Now we're getting more reservations, especially on the weekends.

It's still very new, and we're still sort of figuring out what the space is. We do a lot of before-dinner and after-dinner drinks for guests. For reservations early in the week?you know, Tribeca, it's not really a huge area to go out?a lot of people who are in the area are getting dinner and then coming here. It's a very small intimate space and because it's a very controlled space, it's never going to be a huge party in there. It's a good place to experiment.

I think it's fun, because it is very quiet and controlled, there's never more than 10 or 11 people in there with you at any time. It's just a small lounge?exactly what it's called.

So most of your work history is actually in coffee rather than cocktails. Do you think there's a connection between the coffee and cocktail communities, or at least in the two products?

Yeah, I think that that's definitely true. Even people I know that say they don't like cocktails, usually come around to it.

Why do you think that is?

Why? I guess, very simply?[in both] you're creating a beverage for somebody, and everything you do dictates how their experience is going to go. If I dose a gram higher in a shot, or I let it boil for a few more seconds, it's a different experience, and not always the best one. With cocktails too, if I put another half ounce of sweetener in there, it's just not going to be enjoyable. You're paying attention?it's a very hand-crafted experience.

And there's a lot of awareness with what you're doing, tasting things. You're never going to taste a shot of espresso for somebody, but throughout the day you're going to make sure you're dialed in.

Where are your favorite spots to drink right now?

I went to Pouring Ribbons recently, and I really liked that a lot. Just very comfortable, and great drinks. They're doing a bunch of good things. I've always liked Little Branch, and Weather Up Brooklyn will always be my favorite spot of all time. It's just the most comfortable place in the world. NoMad's doing really good stuff. The new Milk and Honey is really good, I was just up there just the other night. I want to make it over to Attaboy.

We're trying to do pretty cool things and there's a lot we plan on doing in the future, so this is sort of a good way to get a good glimpse of what's to come. I think we're doing some of the most interesting, tasty cocktails out there right now.
· All Coverage of Atera [~ENY~]