Pete Wells takes a break from reviewing the big new openings this week and instead files on Randazzo's Clam Bar in Sheepshead Bay. The restaurant was closed for several months because of damage caused by Hurricane Sandy, but now it's back in action:

Randazzo's makes any number of tomato sauces, but only one Sauce. It has two speeds, spicy and medium, but the dark, intense, concentrated, oregano-accented essence is the same. The tomatoes cook down for an eternity and then some, until they are as deeply caramelized as a pan of fried sausage and onions.

The Sauce can be ladled on hot or chilled lobster, on fried shrimp, on steamed mussels or on chopped scungilli, where it works a particularly satisfying alchemy. And of course, it is poured over floured and fried calamari. A pure distillation of Italian-American cuisine, the Sauce tastes as if a chemical analysis would reveal the blueprint for every great dish in every red-sauce joint in the country.

Wells finds that some dishes miss the mark, but you can have a great meal if you stick to the standouts. The critic gives Randazzo's Clam Bar one star. [NYT] 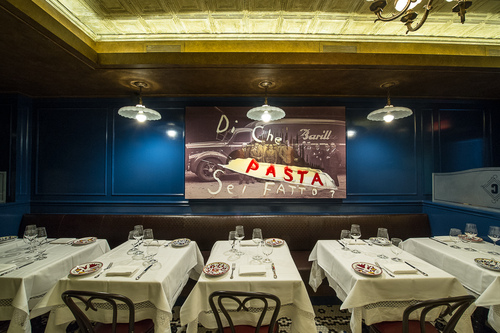 Ryan Sutton files a rave review of Carbone this week: "The young Carbone is already one of our city's finest seafood spots. Posillipo is code for Manhattan shellfish chowder, pure red-pepper-and-Worcestershire bliss. "Stracciatella" tastes like a ramp-spiked riff on the best part of any fish shack: the sweet crab meat that gets stuck at the bottom of a plastic butter ramekin. You greedily eat it with a spoon." The critic gives the restaurant three and a half stars out of a possible four. Sutton notes that the pastas are a weak spot. [Bloomberg]

Robert Sietsema is happy that Phillip Kirschen-Clark took over the kitchen at Cafe Cluny: "The best main course is one of the new ones: Cavatelli that look like little canoes propel through a lobster bisque among looming islands of lobster meat. The rich sauce tastes wonderfully of parmesan, and then the scallions kick in, lashing your tongue with the verdant promise of spring. Even the old warhorses of the menu seem to be getting better: The hamburger ($20) bursts with juices, engulfed in gruyère, bravely wearing a pair of crossed bacon strips on its breast like a field marshal in a lost and forgotten war." [VV]

Although it's not perfect, Jordana Rothman finds a lot to like about Kappo at Má Pêche: "Green bananas are paired with sweet lobster meat, cucumber and punchy habanero, and plantains are worked into sweet, rugged dumplings in an intense beef-tendon broth. A DIY mofongo arrives in a palm-sized mortar and pestle filled with garlic, pork fat, more plantains and chicharróns—patrons mash it themselves, joyfully pounding away like children at the crafts table." The interim critic gives the restaurant three stars out of five. [TONY]

Adam Platt awards two stars to Cata and no stars to Manzanilla. On the latter: "The fact that the staff knew there was a restaurant critic in their midst (one of my guests inadvertently booked the table under my name) did not prevent the kitchen from slathering the barely edible $34 lamb shank in a tarlike glaze, or obscuring the bacalao in a dated, salty
foam. " [GS/NYM] 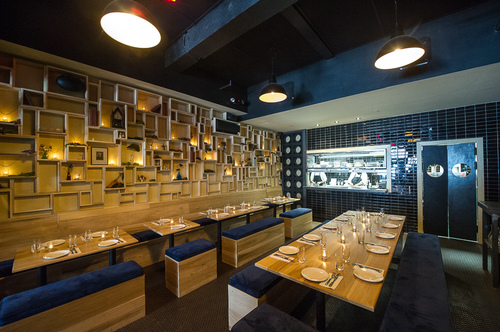 [Pearl and Ash by Krieger]

Stan Sagner encounters some hits and misses at Pearl and Ash: "A disjointed production of Cod ($14/$26) has plenty to say, but all the players talk at once. Silky bean purée anchors a tender baton of fish, but both are drowned out by a jarringly salty duo of tapenade and oven-roasted tomato. The only way to make sense of it is to scrape away the toppings. Skate ($13/24) hoards whatever salt the kitchen might still have left." It appears as though the Daily News has dropped the star system. Or maybe somebody forgot to attach them with the review. [NYDN]

THE ELSEWHERE: Gael Greene finds a few dishes she loves at Lao Dong Bei in Flushing, Ligaya Mishan recommends the southwest Indian fare at Malai Marke in the East Village, Joshua David Stein likes the revamped menu at Montmartre more than the original one, Leo Carey of Tables for Two is impressed by the quality of the classic French dishes at Le Philosophe, and Tejal Rao is pleasantly surprised by the American-influenced Vietnamese fare at Nightingale 9. 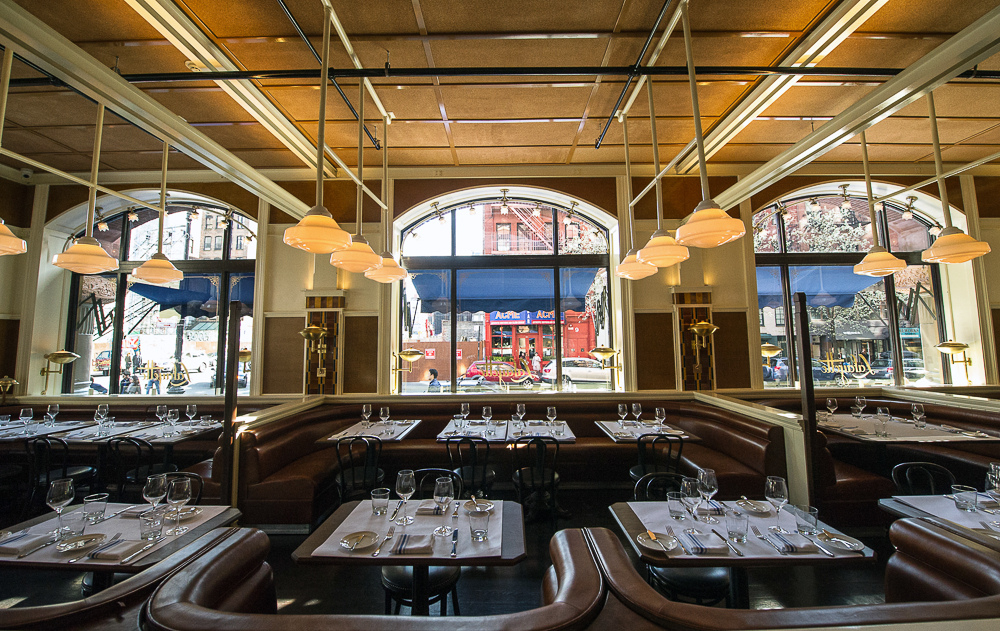 THE BLOGS: Serious Eats digs the Sichuan food at Lao Cheng Du in Flushing, The Immaculate Infatuation boys give an 8.0 to Pearl & Ash (and a 1.4 to The Claw), the Pink Pig has a pleasant meal at Yunnan Kitchen on the Lower East Side, NYC Foodie stops by Lafayette on opening night, Brownie samples a massive sundae from Ample Hills Creamery, Eat Big Apple likes the hotpot at Mister Hotpot in Sunset Park, Goodie First enjoys some of the dishes at Selamat Pagi in Greenpoint, and NY Journal is underwhelmed by Le Restaurant at All Good Things in Tribeca.