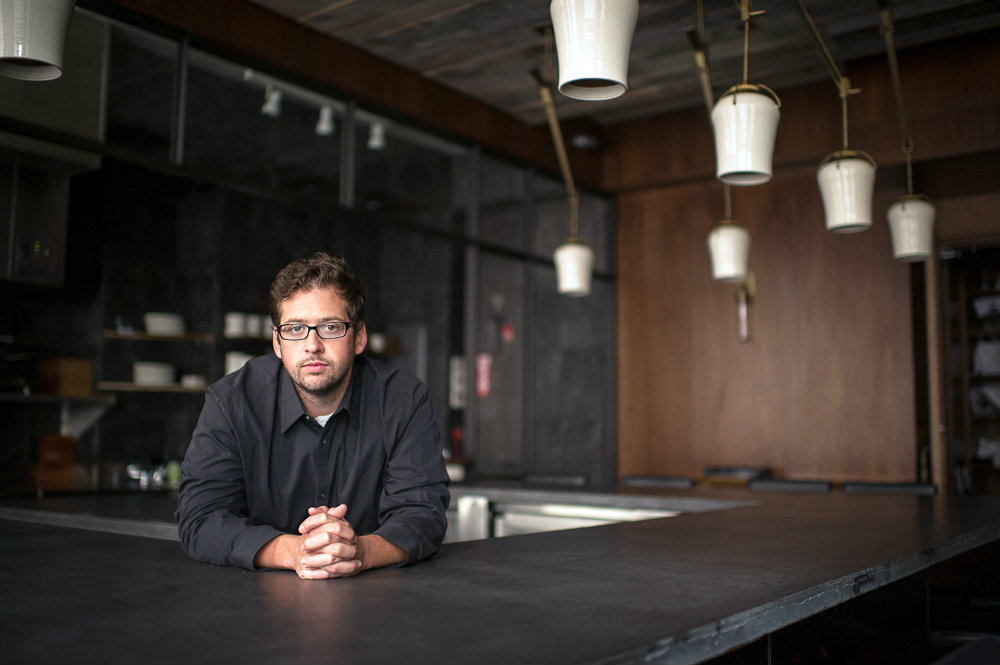 Unlike many outsider chefs, Matt Lightner came to New York and found success right off the bat. And he didn't do it by playing it safe, either. Lightner came from Portland to open Atera, a tasting menu concept in a Tribeca space some thought was probably doomed. The restaurant counts a veterinary center as one of its neighbors, and the ambitious project that preceded it, Compose, failed. Under Lightner, Atera ended up earning two Michelin stars and raves from the likes of Pete Wells and Adam Platt. In the following interview, Lightner takes stock, and looks towards the future, as Atera turns one.

You came into a space where a similarly ambitious project failed. Were you scared?
When I was brought into this project, the owner told me about the situation and how they needed someone to change the direction it was going in. At the time, I was working at a regular restaurant in Portland and I thought this could be great, but that we'd have to really rethink the whole thing and almost start from scratch. When you force your food into a space, it doesn't really work all the time. So, when you have the chance to develop the design and the concept, you have the potential to make it seamless.

What were some crucial parts of that development process?
We definitely needed a production kitchen downstairs, which didn't exist before. We may be only 18 seats, but you go through so much product, plates, and silverware. That was key. We also want people to come up here and feel like they're in the kitchen, just without the bustle and negative aspects of having a kitchen counter.

With that, you need to get people in the groove and develop a routine, so the chefs and cooks can operate smoothly going up and down.

Did you have an idea of the food you wanted to do before you came in?
I had an idea of what it was going to be, but it went into motion when I got here. Now, though, I really do think is when you'll start to see changes and real growth. It takes time to get to that point and to develop your voice. I think the execution will get better, as will the general thoughtfulness of it. I think when you're building a place, there are so many moving parts that it's difficult to just focus on the food part.

I'm looking forward to looking at pictures from last summer of dishes and saying, "What the hell were we doing?" That's exciting to me.

Were there any surprises, unpleasant or pleasant, about the opening?
The story with New York is that it's extremely difficult to get open and that you'll always hit bumps on the road and find serious obstacles. I know people who open multiple restaurants and still have that hurdle every time. The surprise, for me, was that we were really lucky in that we got this place open in six or seven months. That was great.

What mistakes did you make?
It's hard to sit and complain about mistakes, since I couldn't be happier with how things have gone. One thing I could be better at is time management. When you're waiting for things, instead of just waiting, you can make progress on other tasks.

It certainly would have been nicer to open the lounge with the restaurant. We've had to adapt it to the restaurant months in, but it's still great to have it, and a bit of something new. It allowed us to rethink things and work on a new concept right after most of the reviews had come in. It was fun.

Can you tell me about how the lounge affects the experience?
When people come here, they are investing money in the hopes that they are going to get an experience that is worth it. We want to give them that. So, maybe they want to come a half hour early and get themselves into it and have a conversation and a drink. We couldn't let them do that before.

We also had an issue that I wasn't personally happy with: When people are finishing up, they shouldn't be sent away so that the next seating can come in. Every moment matters. You can't give someone a nice experience — where maybe they're really moved or happy — and then quickly hand them the check so they can get out sooner. In a lot of ways, you've wasted your time as a chef and hospitality person if that's the end result. So now, they can go downstairs and either finish their meal or just go hang out for as long as they like. It helps us logistically, but it also adds another layer to the experience.

It's something you see a lot at tasting menu restaurants in Europe. It keeps the experience fresh, fun, and dynamic. Mugaritz and Faviken, for example, do it really, really well.

Has the stress died down?
It's a constant for me. You just learn to deal with it and almost appreciate it. It's hard as hell sometimes, though, seeing just how many famous or discerning writers, chefs, and people will come in. There's a level of tension, but it's pretty much the same as excitement.

So you enjoy that?
For me and for a lot of people in this business, there's a love of that. It's pretty remarkable.

This is a chef counter where everything is on view. How do you deal with not being able to really adjust or change the service for someone you might want to impress, as might be the case at a more conventional restaurant?
It's a very interesting kind of dance here. You can't move too much or make eye contact — there are so many things. But at the end of the day, I know how this experience is supposed to go for everyone that walks in. You want everything to be perfect — all 10,000 details — so you can't really give one person an extra foie course or two extra herbs. No, you should push yourself to give everybody that experience. That should be the goal.

Even if some people might not agree with what you're doing or not totally like it, your goal is to make sure that there is consistency, that everybody got the best that you could give them. That helps you get closer to finding what your next level is.

And how do you deal with getting upset or communicating with your cooks in this setting?
It's interesting, because I've worked in a lot of different kitchens. You know, at Castagna, it was the first time I was really putting my food out there. In a lot of ways, when you do that, it's like an artist putting out his work. So, when someone messes up the way you want it, you can really overreact. It was also a young kitchen, which adds to that boisterousness. But here, you really can't. You stop, get rid of it, and do it again, which is what you do in a more conventional closed kitchen. You just have to cut out the yelling and aggressiveness, which is probably a better, more effective route, anyway.

But everyone here, even in the kitchen, has the right to have days when they are upset and days when they're not. They're not robots. If they aren't allowed to be themselves, they can't reach their potential. And you have to be careful about being too harsh on staff, because these people are really investing themselves. They're working five or six days a week, 15 hours a day. They're not invested monetarily — they're investing their youth, their health, all these things. When you're upset, they know it, so if you go too far, you're just crushing them and trying to put them down.

How do you deal with customers who come in and may not expect this format? Folks who may have been brought in by someone else and end up being somewhat apprehensive.
That's common in most restaurants that do tasting menus, I think, especially in the early years of their existence. After that, people more or less know what to expect. I think word of mouth is a really big part of that, actually. Now, we're basically on a prepay system, so if you're a party of five, you have to sort it out before you come in and you get the idea that you're going to pay a certain amount of money for a certain type of experience.

So you don't run into that often?
No, not at all. We've been pretty lucky in that regard. I could have seen it going the other way really easily!

Can you talk to me a little bit about how you're thinking about your food these days?
Our whole goal is to throw out recipes and what we've always done. It's really hard, but the goal is to rip out the references you've always relied on. So we'll have an eggplant and try and eliminate all the ways we know it's been done so we can try something else. Many times, you just sit there and nothing comes to mind. But trying to do that, I think, makes your restaurant thoughtful.

You're so trained to do things and to refer to the people you admire, but you have to try to get out of that. Andoni [Aduriz] at Mugaritz is really good aat making his staff get out of those habits.

Are there any concrete goals for the future?
There aren't any concrete goals, really. The goals change over time and morph, but in general, we want to find better products, develop relationships with farmers so we can get exactly what we need, and work on making the experience better — and the same for everyone who comes in.

Do you see yourself here for the long haul?
Yeah, definitely. I think success is built on longevity. You can't get a few good reviews and just be done with it. And I think New York knows that, too.