Share All sharing options for: Nick Kim and Jimmy Lau Take Stock as Neta Turns One 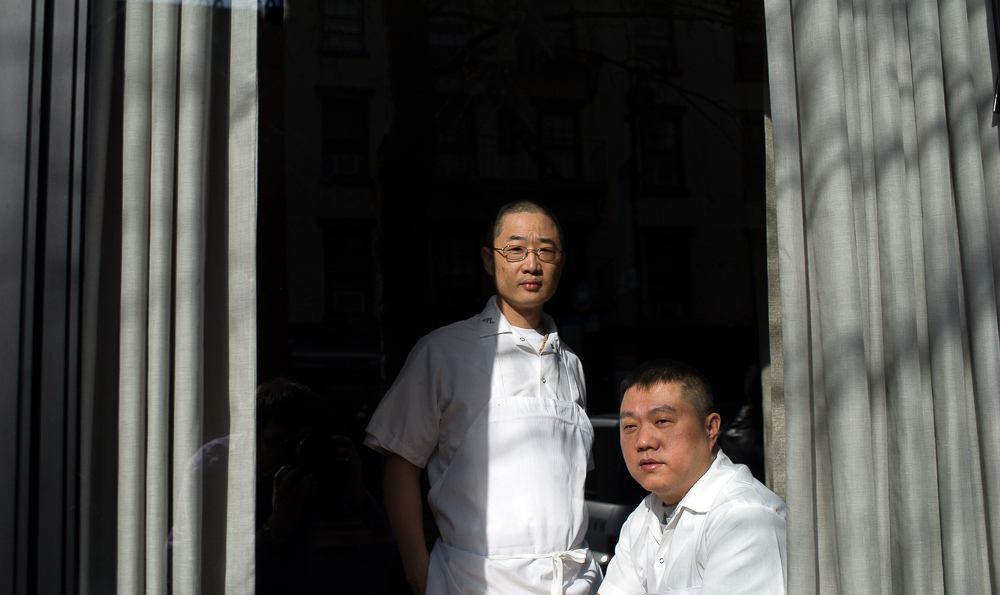 Sushi chefs Jimmy Lau and Nick Kim met almost a decade ago while working for Masa Takayama at his restaurants in the Time Warner Center. They always talked about doing their own restaurant one day, and that dream became a reality last March with the opening of Neta in Greenwich Village. After a year of sparkling reviews and packed dining rooms, Jimmy and Nick are now considering expansion. Below, the two chefs look back on the first year of their sushi hit, Neta.

When did you guys start talking about doing a project of your own?
Jimmy Lau: During preparation, we were always together talking about what we would do in the future.
Nick Kim: Jim and I both worked for Masa for eight years plus, so, yeah, a lot of time was just spent day-dreaming and planning things out.
Jimmy: We talked about it every morning...

Did you guys always want to do something in the Village?
Nick: No, we were thinking more Midtown. We had a lease that we were negotiating, and it kind of fell off, and then we were really focusing on uptown. And at one point, we started to venture outside of that area and went downtown and found this space.

Did you get to build the kitchen to your specifications?
Nick: Everything. From the floor to the top of the wall — we got 100 percent involved with it. We have a kitchen designer who designed it with an architect and the general contractor. We did it really old-school, I guess. We were here every day with the general contractors, a lot of learning on the job.

How was the opening? Did people check it out once you guys got the doors open?
Nick: Yes, definitely, they came. And we were nervous that nobody would come. So, it was one of those things that once people showed up...even one person showing up was very cool.

In terms of style of service, what did you guys want to do? Did you want to make it more relaxed than Masa or Bar Masa?
Nick: Definitely. We wanted to take the edge off that formality. Not to be too strict, kind of just let people enjoy and relax. A lot of times it's too practiced, and I didn't want it to be that way. I think we kind of achieved that in many ways here, where we play the nontraditional Japanese music with that kind of environment, but it's a little bit more downtown and more relaxed.

Jimmy, did you have any customers from Bar Masa follow you down here?
Jimmy: Yeah, they have. But I worked in the back, so I didn't see the customers. I don't know their names, but they come, they know my name.

What was the review process like?
Nick: Platt was the first review, which, you know, was pretty gentle, I thought. Opening a restaurant is not that easy. Pete Wells was very gentle, and I just want to give him a hug and...I hope that one day our paths cross, because it was just such a beautiful thing he wrote, and he just totally got it. It was very kind.

He wrote poetically about your food — it was a great review. Were you surprised?
Nick: Yeah, it was very touching, and really a mind-boggling, just out-of-body experience. I just stood looking outside, and didn't know what I was staring at for a while. Yeah, just really touching. I just love what he wrote. I had to read it a couple of times to really understand what he wrote and say, "Is this for real?"

Did business change, after that review?
Nick: For sure.
Jimmy: Yeah, it definitely changed.
Nick: We were fortunate to open and have customers and after that it increased. We've just been really fortunate.

Did you change anything after the reviews came out?
Nick: Sure. We're all going through that process throughout, before, and after. We're just listening to what the people's needs are. You know, it's a very intimate relationship that we have with our guests here. We kind of understand their needs and requirements, or what they like. And at the end of the day, we just kind of try to provide that.

In his review, Wells wrote: "Neta will be an even more exciting and confident restaurant when the chefs have learned to trust their customers." Do you think you've started to trust your customers more?
Nick: For sure. We took in that remark, and just took it to heart, because he is absolutely right. And we've done things to be more open and adventurous...especially with our repeat guests. We're starting to have a good group of people that are into that kind of stuff. So, we are fortunate just to have that sort of opportunity.

If you have a repeat guest who really likes what you're making, and they want to try something maybe a little bit outside the box, what would you offer them?
Nick: Right now we have sweet shrimp that are marinated and we let them just ferment. And the same with lobster, or different organ fish parts, like livers. There's a a lot of fermented uni that we're salting — that's been going on for a couple of months. We got some shipment from Santa Barbara but it tilted over, so it's good, but it isn't beautiful, so we marinate it in sauce and salt it, and just put it in the walk-in for like, several months.
Jimmy: We're a big fan of uni here.
Nick: We're definitely, like, uni all over the place. I feel like uni is one of those things that...it's kind of like salt. It's more about what it does to other things...kind of like soy sauce or salt — it's kind of like a seasoning.

Do you see yourselves staying and doing this one restaurant for years and years, or do you want to open other Neta locations or other restaurants?
Nick: Sure. We're actually looking at spaces for like a small type of izakaya that has a bar, sort of thing. Half of this size, something a little more sophisticated and refined...like a 1950s Mad Men-style place, but Tokyo. Limited items with just really nice product. But that's in the works. Also, we're just kind of trying to get this thing healthy and achieve volume.

Does it feel like it's been a year?
Jimmy: Yeah...it's certainly been one year.
Nick: It's been an unbelievable year. Yeah, it's just a crazy ride — and we're glad to do it in New York. It's unreal.