Do or Dine's Justin Warner on the Double SmokeShack

Share All sharing options for: Do or Dine's Justin Warner on the Double SmokeShack

And now, a Burger Week recommendation from Justin Warner, the proprietor of Do or Dine and the star of the TV show Rebel Eats. 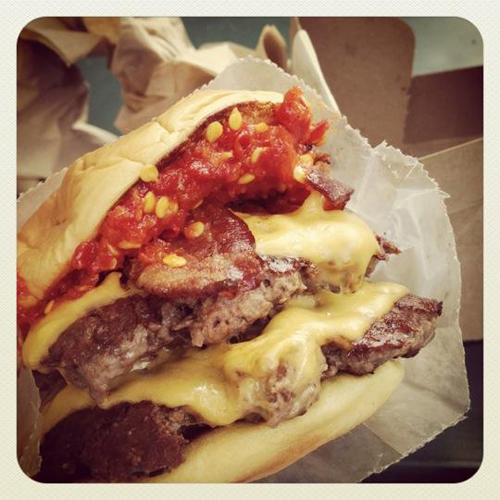 I generally don't discuss burgers in public forums because nobody ever agrees with anyone about it and it all descends into madness. See the comments below. But my fave burger in NYC is Shake Shack's "Double SmokeShack." Now before everyone gets all riled up with claims that I am shilling for Danny Meyer because we are chums, consider the cold hard facts.

The bun is hinged. This is crucial for burger devouring, as the bun now forms a pocket for which to hold the rest of the goods. Nothing is less graceful than going in for that money-bite of a burger and random components start spewing out of the other end. The hinged burger is a no-brainer to me and I think all other burger pushers should take note.

Inside this yeasty parcel there are four components. First, two patties — thin, loosely packed, griddle-cooked. That's Pat LaFreida meat in there, and I think we can all agree that Pat is king of the meat-game here in NYC. He's also pretty good at volleyball. I can't quite decipher the ratio of the beefy mix. You know in a good Sazerac how the glass is rinsed with absinthe? I feel like this burger is rinsed in corned beef, but don't quote me on that. The other three components are where this burger separates itself from the rest. 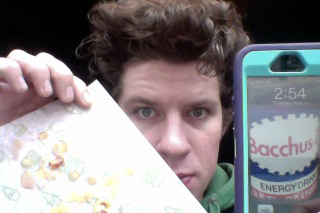 First, a skiff of Shack Sauce, which is vaguely Thousand Island-y but far lighter. It's slightly sweet, and works as a great lube for that burger once it gets in your mouth. It makes the burger tumble around your mouth like meaty cherubs in an inflatable bouncy castle. This scene is interrupted 1/8th of the time by crisp shards of Niman Ranch bacon, the loving smoke-scented mother telling the children not to do somersaults in the bouncy castle of your mouth. The final component is cherry pepper relish, which puts the aforementioned scene on a slightly spicy acid trip, simultaneously washing it from your gustatory memory and commanding you to take another bite, in a sort of Groundhog's Day effect until there is no burger left.

For the record, I wrote this while eating the burger (see timestamped photo), just so you know I'm not conjuring up some mutated memory of a burger I had when I was tanked at Minetta Tavern.
— Justin Warner