A Burger Week Chat With the Owners of Whitmans

Share All sharing options for: A Burger Week Chat With the Owners of Whitmans

Whitmans on East Ninth Street serves several different regional burger specialties, but the dish that's received the most attention and acclaim is the pimento cheese-stuffed Juicy Lucy burger. Eater recently chatted with owners Larry Kramer and James Cruickshank about bringing this Minnesota favorite to New York City, and about what it's like to run a small, sit-down burger restaurant in the East Village.

What makes a great burger?
James Cruikshank, co-owner: Freshness, TLC, and caring about the actual product. But if you want to get technical, proportions are pretty important. I think a lot of people make their burgers too big, or the buns are too big. If you care about what you're doing, I think it will turn out pretty good.
Larry Kramer, co-owner: James pretty much nailed it on the head. We're not a fast food place. We take our time. The Juicy Lucy, for instance...the whole man hours involved with this are tremendous, and it takes 12 or 13 minutes to get it to the customer. We try and bring that care into each of the burgers.

Can you tell me about the inspiration behind regional specialties like the Juicy Lucy?
Larry: One of our partners, Alex, came up after doing some research, and said, "Why don't we try this." So, our chef at the time consulted on a lot of regional things. We brought pimento cheese instead of regular cheese into the Juicy Lucy, which is a southern cheese. And the Juicy Lucy comes from Minnesota, and the guy that we were working with at the time along with Alex came up with his version of the Juicy Lucy, and that was something that we needed to just separate ourselves, because it wasn't being done here on the East Coast. 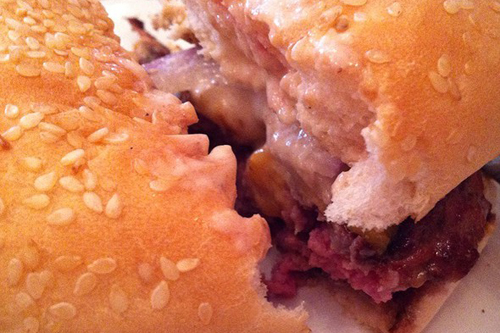 James: We sort of did our own New York take on it. It's our own version of the Juicy Lucy, and like Larry was saying, it takes some manpower. Some serious love goes into the making of the Juicy Lucy. We really do care about the food that we're putting out.
Larry: The East Village people care about what they're eating. They're artists, they're students, they're reading stuff, and they always want to try something new. Whether they're here to try our PB & B, which is our peanut butter and bacon burger, or the Juicy Lucy, these people are interested, and that's a cool thing about this neighborhood. And also, when we add specials, that comes from people coming back and wanting to try these dishes.

Is the Juicy Lucy the most popular burger?
James: Yes.

Whitmans kind of floats between the super-cheap restaurants in the East Village, and the moderately priced sit-down restaurants. Has it been a challenge to keep that middle ground?
Larry: Oh, definitely.
James: You have to adjust, I guess. When we first opened, we were just a counter up here, then we finally opened the dining room downstairs. You have to feel out the neighborhood. That was always our goal, to be a part of the neighborhood.
Larry: When we first opened, the Juicy Lucy was $10, now it's $11, just because the cost of everything has gone up so much. It's still a very affordable burger for what you're getting. A lot of product and a lot of the commodities have gone up for us unfortunately, through our vendors.
James: We always try and keep something that's super-affordable. Whether it's a beer for $3 or a burger for $7, we always want to keep something for the skaters in Tompkins Square Park. We want those kids in here, we like being a part of the neighborhood. You can't treat people like suckers in this neighborhood.