Share All sharing options for: Littleneck's Aaron Lefkove on the Burger at Paul's

And now, a burger recommendation from Aaron Lefkove, the proprietor of Littleneck in Gowanus: 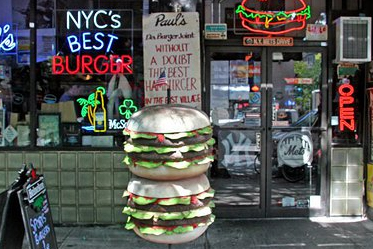 "Have you ever had the burger from Paul's, man?!?!?!!!!!! It makes you SHIIIIIIITFACED!" said, or rather screamed, Alberto, the proprietor of Wowsville—the East Village record shop known for trafficking in all manner of garage rock and slop of the Crypt and Norton varieties, Dee Dee Ramone paintings, Roberta Bayley photos, and anything that vaguely employs the Bo Diddley Beat—which decamped from Second Avenue in early 2005 only to resurface in Berlin a few years later. And while explaining the proper usage of American colloquialisms like "shitfaced" to a Spaniard might be a tall order—no, the burger at Paul's doesn't exactly make you fall down drunk when you eat it—the guy had a serious point.

As with pizza or tacos or nachos or the rock'n'roll peddled a few doors down at Alberto's shop when you are only working with three, maybe four ingredients at the most, the margin for error can be a vast gulf. In the way that Wowsville was a lot more than just the sum of its parts (its parts being mostly Back From The Grave comps, Billy Childish records, cheap beer, and a five foot tall Rat Fink statue...and try and see what that all adds up to) so too is Paul's more than just a greasy burger joint. Which, I mean, don't get me wrong, it totally is. But it's more.

Because as much as one can love a burger loaded up with all the trendy of-the-moment buzzwords like "grass-fed" and "free range" and "organic"—and don't get me wrong, I love those kinds of burgers! Trust me, I could easily rattle you off a list of a dozen or so that I've eaten that have totally rocked my world and still not cover all the fancy burgers I have loved in my life!—there are some things that need not always be so over-intellectualized; the beauty lies in the simplicity. Cheeseburgers, and Paul's eight ounce, griddle-cooked, instant hangover curing/perfect ending to a night of hard drinking, on a bun that emulsifies as soon as it touches grease cheeseburgers specifically, are one of those things.

It's a burger that eschews trends and is confident enough to just be a burger. Perhaps it was fortuitous that Paul's was located just a couple doors down from Wowsville—Paul's with their five-foot-tall cheeseburger on the sidewalk, Alberto with his equally massive Rat Fink out front—because cheeseburgers and records are the Barolo and wild boar of the Budweiser and Cramps set (although come to think of it, some of the greatest wine reps I have ever worked with have been former record collectors as wine is the more "grown up" version of digging through bins for undiscovered and uncomped raw and rare KBD singles so maybe there is something to that).

The dayglo pink Wowsville storefront has long been painted over and converted into E-Nails, an unassuming by-the-numbers salon (hey, at least it's a step up from being another FroYo shop). But thankfully, Paul's, serving that same burger since 1989, is still going strong. So go try one. It'll make you shitfaced!