A Burger and Martini at the Historic '21' Club in Midtown

Share All sharing options for: A Burger and Martini at the Historic '21' Club in Midtown

Unlike a number of the restaurants I've featured on "Who Goes There?," the visit to the "21" Club that led to this column wasn't my first. I've been to "21" dozens of times over the years. Its utter uniqueness within even the rich Gotham culinary tapestry—historical New York eatery; former speakeasy; lone survivor of "Swing Street"—makes it a magnet for my nostalgic sensibilities. Inside its cocoon of bygone decor and attitudes, my longings for the trappings and traditions of Olde New York are easily salved.

When I have dined there, I have, almost without exception, ordered either the famous burger or the chicken hash. I gravitate toward these entrees not only because they are among the few historical mainstays on the menu—the burger was introduced in the 1950s, putting "21" way ahead of the curve in respect to haute current wave of haute burgers—but because they are also among the most affordable items. And, yes, at "21," $32 is "affordable." (One of "21"'s most irksomely enduring traditions is its exorbitant prices.) But that's just as well. From what I've heard and read, the more expensive dishes generally make for poorer dining.

The burger has changed over the years, in terms of spices and bun and other such components. I feel like I've eaten at least three different "21" Club Burgers in my time. This most recent sandwich was much fatter, and with a larger bun, than the burgers I remember from the past. But it was just as satisfying as it's been on other occasions. So was the Martini I had. And so are—I know from experience—the bar's famous Southside cocktails. 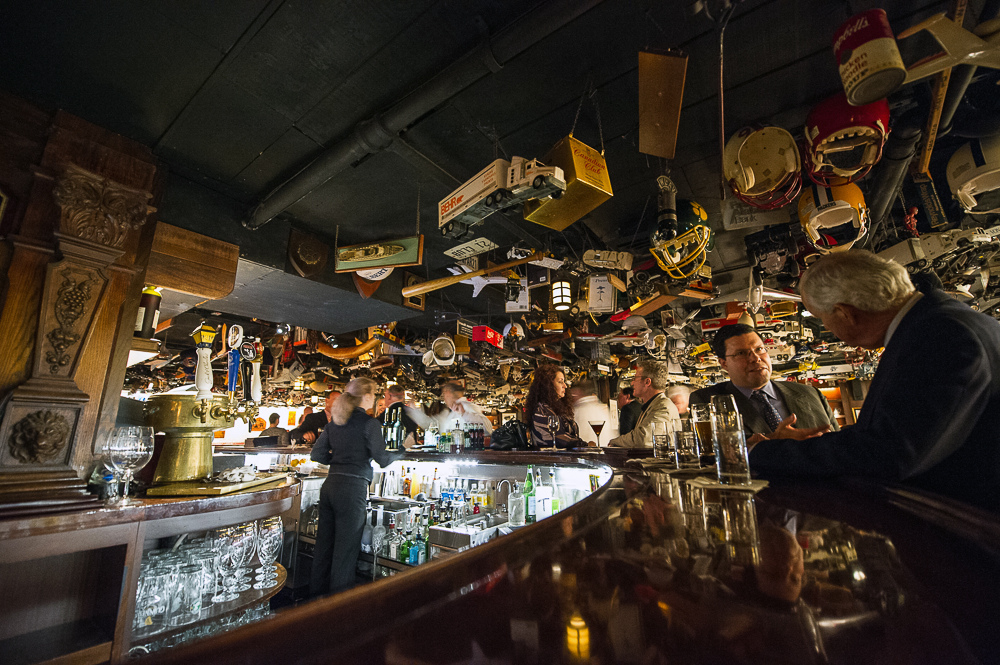 My many visits notwithstanding, I have a love-hate relationship with "21." I like that the patrons wear suits, behave with old-school decorum, and are loyal to their old haunt. I love the interior design, the old hat-check stand, the bizarre old murals in the men's bathroom, that the sommelier wears a tastevin, and, most of all, the Prohibition-era wine cellar with its secreted, two-feet-thick cement door. And, God knows, I am downright grateful for the absence of a blasting music soundtrack. (Chefs of New York: I'm not interested in what kind of music you like.) However, I have to admit it makes me queasy when I contemplate how little I probably have in common with my fellow diners. Which leads us to the question of who goes there. The answer for "21" is largely rich, white members of the Grand Old Party who can buy and sell you, dear reader, a dozen times over. Wall Streeters, East Siders, corporate titans, politicians, some celebrities and the occasional name journalist. Those tinker toys hanging from the ceiling are the gifts of the CEOs of the companies whose logo are emblazoned upon them.

I am also troubled by the international corporation that owns the storied eatery and doesn't seem to know what it has. I'll never quite forgive the restaurant for ripping out the old bar in order to squeeze in some additional seating, and replacing it with a shortened facsimile of the original. A piece of vandalism, that was. But I'll take what's left. And I probably will until the last jockey falls.
—Brooks of Sheffield
· All Editions of Who Goes There? [~ENY~]