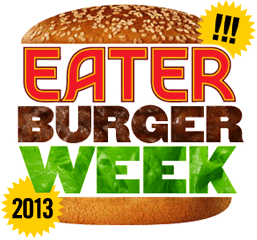 When I come back from a review dinner, my friends don't ask me what I thought of the squab liver terrine wrapped in sea urchin carpaccio. Rather, they ask, "How was the burger? How was the steak?"

Here's the thing. I like reviewing burgers more than I like reviewing steaks for the same reason that I like writing about cocktails more than wine. Steaks, like wines, are curated. A large part of how that ribeye is going to taste is predetermined before the chef puts the meat on the grill. But burgers, like cocktails, are made in-house (or ground to a restaurant's specification by a celebrity butcher), and in that sense I can tell a lot more about a chef's creativity and competence by ordering the burger.

Also, I'm tired of eating giant steaks at restaurants. So if there's a burger on the menu, I will order it, and space permitting, I will review it. That's the rule.

Like any rule, there are exceptions. I do my best not to review sliders, because sliders are the cupcakes of burger world, and since I don't eat cupcakes, I don't eat sliders. Just so no one gets all worked up about this, I'm not talking about White Castle sliders (which are great) I'm talking about mini-burgers with a toothpick stuck in the middle, which have little place outside of banquet halls and bar mitzvahs.

I also avoid ordering burgers only served at lunch. Some chefs subscribe to the false notion that hamburgers are the Angelina Jolie of food, a gorgeous head-turner that prevents diners from ordering anything else on the dinner menu. So these insecure chefs relegate burgers to midday. That's hogwash. If you're really going to deprive me of your lunch burger at 7 p.m. because I've been working all day like the rest of humanity, then you know what? Your burger doesn't deserve to be reviewed.

Writing about burgers is tricky in the sense that writing about pizza is tricky; both you and your readers are likely to have strongly-held views about what constitutes quality. These narrow-minded opinions were formed when you were growing up and your mom or dad brought home the same pizza from the same pizzeria every Friday. Writing about a Grant Achatz dish is a lot less stressful than writing about a burger because no one grew up eating green apple balloons filled with helium. Honestly, I don't think I've ever gotten an angry reader email after writing about an Alinea dish. But a burger or a pizza? Fugghetaboutit.

So one way to deal with these issues is by being descriptive ("Joe Blow's burger is made with aardvark and smoked ear cartilage, and the namesake ingredients express themselves with clarity") instead of being judgmental ("Joe Blow serves the best aardvark burger in the city"). Then again, at one point or another as a critic, you have to stop being scientific about things and just let the readers know what you're into.

So I showed some of my cards when I reviewed Parm last year. What's great about this here joint is that they offer two burger options: a $9 meatball parm, and yes, it's a burger, because it's served on a hamburger roll and because it's flat like a hamburger patty. With the marinara and mozz, it's essentially a better-tasting version of the Greek diner pizza burgers I grew up on in Long Island. And then there's the $25 patty melt at Parm, only served on Tuesdays, and that's just a straight up dry-aged piece of chopped beef, with more flavor than 95 percent of the steaks in this town. In fact, I'll take it over the Minetta Black Label any day.

Now stay with me on this because this is important: You know how they say Alex Stupak is such an envelope-pushing Mexican cook because he doesn't have generations of Mexican grandmas breathing down his neck? ("That's not the way I served it!") Well I almost want to say the next great American burger chef (and perhaps burger critic) will be a non-American, an Alexis de Tocqueville of meat, who won't have to worry about the shackles of U.S. authenticity.

Perhaps that's why I'm such a big fan of the burger at The Breslin, served by our city's best British chef, April Bloomfield. It's lamb, not beef, and it quite frankly took serious cojones to open a joint near Penn Station and serve a lamb burger. It's juicy, it's fatty, it's funky, it's fantastic. It's a step in the right direction if we're going to cure our country's addiction to beef. Non-beef burgers are the future of burgers.

If I had one wish, it would be to have a non-bovine burger day next year, where every restaurant with a beef burger changed its preparation to lamb, duck, pork, or some combination of meats that quite frankly have a heck of a lot more flavor than the beef that we're eating these days. Too dry? You can use some beef fat. Like I said in the beginning, every rule has an exception.

If I had two wishes, the second would be to go easy on me in the comments section. But I suppose that's asking a lot.

· All Coverage of Burger Week [~ENY~]