Chefs and Experts on the NYC Burgers They Miss Most

Share All sharing options for: Chefs and Experts on the NYC Burgers They Miss Most

It's time to focus on the great New York City burgers that don't exist anymore. Over the last few days, Eater asked chefs, writers, and burger experts — all of whom have a connection to the city — to get nostalgic and talk about their favorite burgers from restaurants past. Some of the selections, like the burger at erstwhile mini-chain Prexy's and the restaurant Cal's, are indicative of a time when famous butchers and customized blends were not part of the deal. Other choices, like the ones at Ann Rosenzweig's Arcadia and Seymour Burton, reflect more chef-driven takes on the burger. One thing's for sure: all of them are no more.

Ann Rosenzweig was a pivotal, brilliant chef and restaurateur in NY in the 80s. She brought a new elegance to dining and she had a mastery of American cuisine which she single-handedly evolved into a master class on the classics. I miss Arcadia dearly and Ann's amazing ability to take burgers and club sandwiches to a fantastic new level. She was all about impeccable product and spare, precise cooking in an atmosphere of perfect gentility. All in all, a great hamburger from a great chef.

The one I remember best was Prexy's on Eighth Street. I passed it almost every day on my way to school, pondering their slogan, "The hamburger with a college education." I never have figured out what that meant. They served their burgers with a slice of raw onion. I don't know if they were really great, or if it's just that taste of childhood, the way you remember the first pizza you ever ate.

Chef, The Harrison and Red Cat

The best burger I ever ate was from a joint called Lick It Café located in Far Rockaway. It was 1976. It had a steamed potato bun instead of a griddled sesame bun. I'm partial to a potato bun. Back in the 1970s, you made your burgers out of "burger meat" and ordered it by naming the ratio of fat to meat; for example, 80/20 meant 80 percent meat and 20 percent fat. I'm not sure what the ratio of this burger meat was, but it was damn tasty.

The burger I miss the most is the Monday Night burger from the sadly closed RUB BBQ. Each hand-pressed patty was personally made by pit master Scotty Smith who would emerge from the kitchen, his eyes squinting from the billowing smoke, and hand it to you on a paper boat with wax paper.

Also missed: Sassy's Sliders, originally on East 10th Street and 2nd Ave. It was open in mid 1990s and served, as you might imagine, sliders that were close to White Castle in terms of construction, but with better beef. They moved uptown at some point, but it was never as good after that. Now closed. I also miss the Prime Burger. Truth be told, I didn't love the burger, but I loved the idea of the place and that it existed for so long. 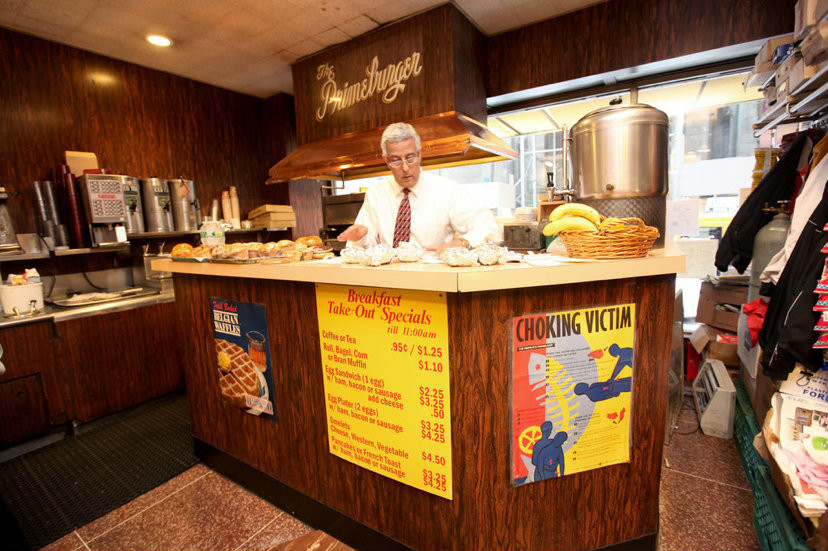 During my short, unhappy life as a restaurant publicist in the 1990s, I worked for a now-departed agency in the Flatiron District. We mostly turned to "lunch al desk-o" delivered to us from local burrito joints, Zen Palate, Republic, and a variety of area delis and concessions. But once in a while, we'd don our suit coats and stroll over, Reservoir Dogs-style, to Cal's, an airy, old-fashioned, decidedly manly restaurant on West 21st Street with tiled floors — at least that's how I remember them — and an ample bar along the eastern wall. (The space is now, horrifyingly, a Bounce Sporting Club.)

Cal's served Mediterranean/North African food, but I can't name you a single dish in that milieu from the menu because all any of us ever, ever ordered was the burger — available on whole wheat bread (we never ordered that, either), or on a roll, with a pile of fries alongside. This was before the era of the celebrity butcher, so I can't tell you where the beef came from or what "label" it was, but it was, simply and unmistakably, a great burger — charred, just salty enough, pink at the center, and juicy as hell. We'd remove our jackets, roll up our sleeves, have a beer alongside, then pick up ice coffees on the way back to work and fight, in vain, to stay awake at our desks.

Here's what I miss: the cheeseburger at Florent is gone, as are the sliders at Schnack, Hollis Famous Burgers, the Monday burgers at RUB, and my namesake, the Motz Burger, at Water Taxi Beach. 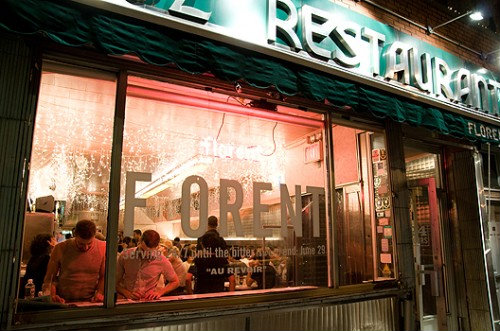 I miss Chumley's for great beer and a great burger. I know Chumley's from my college days, and they had a great burger. It was all about the atmosphere, and the place was a famous speakeasy hangout in the West Village. A lot of what goes on in the burger world today is about over-embellishing, but I like a clean, pure, burger with few accoutrements, and just great beef. With that said, a great beef burger at Chumley's, with the ghosts of many of the greatest writers of the 20th century, made the Chumley's burger memorable.

One very long ago, the other, sadly more recent.

The first one was Prexy's, "The hamburger with a college education." It was a terrific small chain, and the outpost I went to was on corner of Christopher Street and Greenwich Avenue, next to what was the original Balducci's. Not huge, but nice quality meat, broiled to order, on a good bun. They also had some kind of great apple pie or turnover.

More seriously and magnificently: there was a fabulous burger at Village, 62 West Ninth, where The Lion is now. The chef-owner was Stephen Lyle, and that restaurant is much missed by me and many others for many dishes. The burgers were made of great meat, huge and juicy but not too fatty, always cooked as ordered, on a good bun with substance, but still bite-able. Also, a lovely salsa on the side and crackling fries. 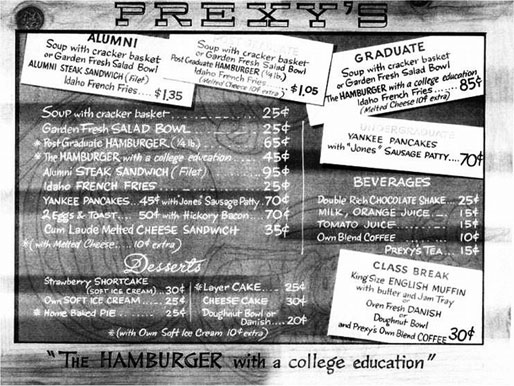 Writer and Author of The Hamburger: A History

Living as we do in a golden age of hamburgers, there is little cause to regret the loss of this or that extinct variety. The worst hamburger served at Heartland Brewery is better than the best one fondly remembered from McHale's or the Landmark Tavern.

But there is one hamburger that I especially loved, remember fondly, and mourn: the Seymour Burton burger, a mammoth grease-bomb served at my favorite East Village failed restaurant. The chef, Josh Shuffman, griddled a rich blend of salty meat in butter, then topped it with some kind of upstate farmhouse cheddar, and served on a giant buttered English muffin. I should have hated it, what with my idiotic prejudice against anything that wasn't served with American cheese on an enriched white bun, but this had a kind of loose-limbed grace and casual opulence that just got the better of me. It's like when you think you only like sharp-featured icy blondes and then find yourself smitten with a kinky-haired earth mother. I fell in love with the Seymour Burton burger but then the bottom fell out, the place closed, and I never saw it again adding one more disappointment and one more loss to an already battered and scarred heart. There was also an aioli on it, now that I recall. Boy, was it rich.
[Here's a 2008 Eater On The House column on the Burton burger]