Share All sharing options for: A Brief History of Burger Favorite Donovan's Pub

Donovan's Pub has been a fixture of the Woodside community for the past 47 years. This beloved New York watering hole is known for its no-frills attitude and juicy, no-nonsense burgers. In 1966, when Joe Donovan Jr. bought the space with the help of his father Joe Donovan Sr., it was a rundown gin mill called the Clover Leaf. It wasn't doing much business, and it wasn't located in a particularly grand neighborhood. To reinvent the restaurant and make it his own, Donovan needed to bring in some new clientele. In a stroke of genius, he began offering free Champagne to women on Thursday nights. As he told the New York Times: "That was a good gimmick. That was the thing that gave me the exposure that I needed." And thus, Donovan's Pub was born.

The restaurant quickly became a neighborhood favorite, especially in the eyes of the local Irish Americans. It was the go-to place for a traditional Irish meal of meat and potatoes, and the affordable prices didn't hurt either. A deep-rooted loyalty was established amongst the locals. To this day, in fact, many of Donovan's patrons are the regulars who have been coming by for a drink and some food for years. And over time, the pub's burger started to develop quite a following.

In 2004, Time Out New York named Donovan's burger the best burger in NYC, pushing the neighborhood favorite into the consciousness of burger lovers throughout the city. Since then, it's rarely been left off any burger-related list. As Lost City's Brooks of Sheffield noted in a recent Who Goes There? column: "It is, indeed, a good sandwich, and a bountiful one. Its virtue—and its drawback—is that the patty is not messed with. They just broil it. Don't touch it, don't flip it, don't season it. Just cook it." In 2006, New York Magazine included the restaurant on its 2006 list of the city's Best Cheap Eats, calling it New York's premier bar burger. And in 2008, the Village Voice sang its praises as a "no-nonsense, hulking beauty of a burger."

Joe Donovan decided to call it quits in 2012, citing old age and the changing neighborhood as the main reasons. According to data from the 2010 census, the old Irish neighborhood was not so Irish anymore. The Hispanic and Asian populations had grown exponentially since 2000, while the Irish population had declined steadily. Jack Donovan, Joe's brother, shared his thoughts on the changing neighborhood for a project by the NYCity News Service called Changing New York: "Woodside is thought of as an Irish community, but it's changing and evolving. If someone wanted to open a bar like ours now, I would tell them to go to Savannah, Georgia, which holds the biggest St. Patrick's Day Parade in the United States." Vietnamese restaurants, Colombian bakeries, and ethnic supermarkets began popping up on the streets surrounding Donovan's. Irish American pub grub was losing its steam with the locals. Regardless, Donovan and his team believed in their food, their prices, and their methods, and they didn't change to meet the needs of a changing world. So on July 30, after 47 years in business, Donovan put his landmark restaurant up for sale. He told the Times Newsweekly: "Everything's changing in the area...It's not the business that it used to be." 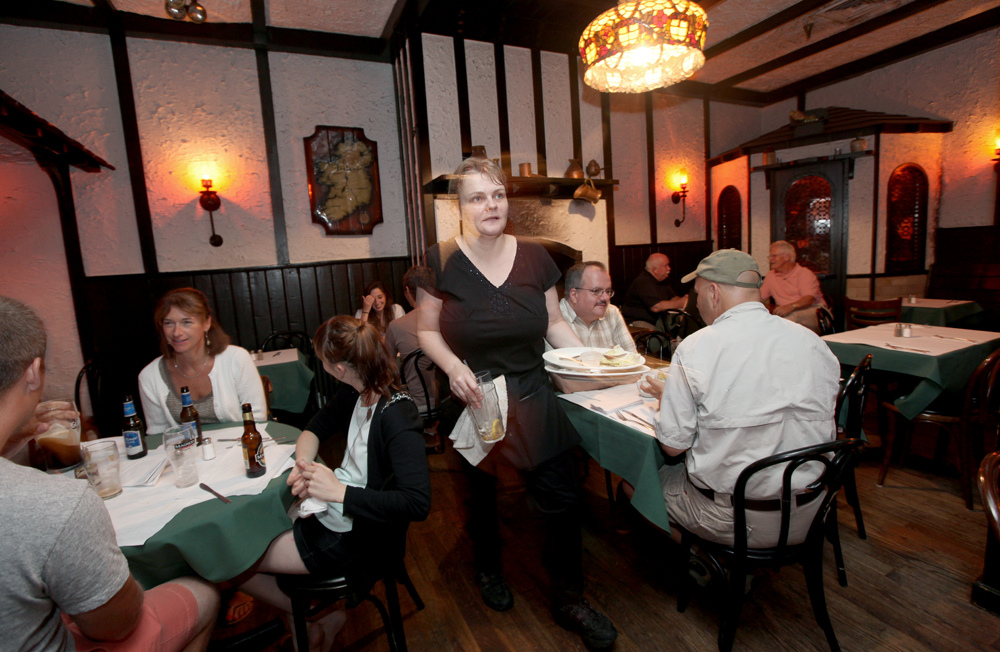 But longtime employee Jimmy Jacobson wasn't going to take the end of Donovan's sitting down. Jacobson—who has been there for 28 years, first as a busboy while in high school and then as a bartender—partnered with his brother-in-law Dan Connor to save it. On January 17, 2013, the new owners took over Donovan's Pub, making a few subtle improvements to the space, namely a new paint job on the exterior and the addition of a computerized cash register system. But the character of Donovan's lives on in the kitschy mementos lining the walls and the plaques honoring local firefighters who died on 9/11 and commemorating various softball victories. Jacobson recently told the New York Times: "We're just trying to bring the charm back." The Donovan's Pub of old, the historic burger joint brought back to life by a loyal bartender, remains a fixture of the Woodside community. And it doesn't seem to be going anywhere anytime soon, which is good news for anyone looking for a good, solid, old-fashioned burger.