Share All sharing options for: After 10 Years, Burger Joint Expands to Greenwich Village

After 10 years in business, Burger Joint, the cultish and tiny eatery "hidden" inside midtown's Parker-Meridien Hotel, is expanding. Its second New York City location is now open at 33 West 8th Street in Greenwich Village. The new outpost is three times the size of the original and, in a first for the brand, this one will serve liquor. The move to open downtown is part of a larger plan from the Jack Parker Corporation to roll out Burger Joints abroad and throughout the United States. Just a few weeks ago, Burger Joint opened in Seoul, South Korea (there's a second one on the way to the city already), and the company is actively looking for spaces in Dubai. In the following interview, corporation president Steven Pipes talks about the decision to expand, what diners can expect from the new locations, and where he'd like to open next.

Tell me a little bit about what your role is in the company.
I'm president of the Jack Parker Corporation, and we own and operate hotels, apartment buildings, and restaurants in the United States. We don't own Meridien. We own Parker.

Walk me through your decision to expand.
We've been around for 10 years, and we really were the first guys to say that we were going to focus exclusively on burgers. We didn't look at it as a primary business. We did it because we thought it would be fun. I lived in the neighborhood, so I thought the area needed something like it. Some people thought we were crazy to do it, but we went ahead anyway.

Did you want it to be a destination spot when you were coming up with it, or did you just want it to be a fun aspect of the hotel for guests?
No, we wanted it very much to be a destination spot. We just never imagined it would be so successful. It's very small, and the lines are out the door every day. I thought, originally, that on the best day we'd do 600 people. Now, on the worst day, we do more than 600 people. We had no clue that it would be so successful or spawn so many copycats.

So, over the next 10 years, we opened another hotel, some apartment buildings, but never did anything with Burger Joint, even though a lot of people talked to us about expanding the brand.

And then, about six months ago, we decided to go for it. We weren't taking advantage of what we had wrought, at a time when everyone else seemed to.

Like Shack Shake, perhaps?
Yeah, exactly. I think Danny Meyer's done a terrific job. He visited our place many times.

We were approached several times internationally, so we signed a couple of licensing agreements. The first one is now open in Seoul. They opened a few weeks ago. They are doing a second one next month. We signed another one in the UAE, where the first one will be, in Dubai. I was in Korea in December, Dubai in January.

It took us nearly six months to find this location on 8th Street. It felt right. If we do well here, we're going to continue to expand domestically.

Do you fear that with expansion, people will inevitably compare new locations to the original, which is small, "hidden," unique? This space, for instance, is a lot larger, and it just isn't the same configuration.
We didn't try to copy what we did uptown in terms of design. What will be identical is the food, and we're super particular about that. We butcher our own meat and make the patties every day. In terms of look and vibe, we chose a place we liked, and some elements will be similar and some won't. Will people compare them? Well, I hope people compare the food. It's a different neighborhood with a different feeling, and there's a bar here. I don't know if we would have built one if it wasn't already in the space. 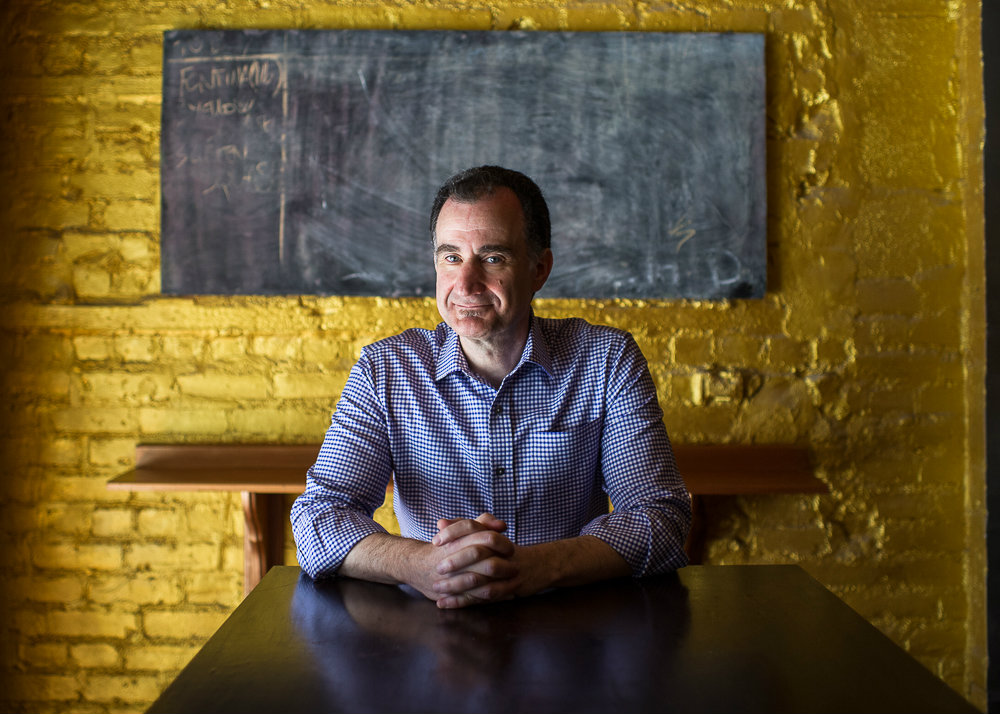 Will you serve liquor?
Yeah, we will. We've gone through the community board and now we're waiting for the state.

I don't envision us having a thousand of these places, but I think we can expand and control it, while maintaining the uniqueness of our approach. People wanted to franchise it, but we didn't agree to that, because we want to control it all ourselves.

How do you maintain the uniqueness at the ventures abroad?
With Dubai and Seoul, the chef and I went over there. The chef is doing the training on the butchering and the cooking. It's very hands-on. We're not sending them frozen patties, but we have sourced for them the meat from Nebraska. We want to keep it exactly the same. We tried local meat there, but it wasn't the same. In Korea, it was also extraordinarily expensive.

One of the things about us is that we don't do a ton of different things. We do one thing, basically, and we do it very well. That helps in this process.

How is business in Korea?
The first one is doing really well. The second one will be in a location that will do better quicker, I think, because the first one is kind of in an offbeat area. In Dubai, we've been spending a lot of time looking, since the obvious thing is the mall, where everyone is. I'm not crazy about the idea of going into a mall, since we'd like to be a little bit off and hidden. We're on a street that's rapidly changing here on 8th Street, but it's not on the avenue or anything like that. We want something a little more laid-back.

Why do you like this particular location for the second New York outpost?
When we started looking all over the place, we wanted something that was near good traffic but wasn't right in the thick of it on Broadway or something. We had no idea, but the Greenwich Project opened last week, Neta is down the block, Stumptown is opening diagonally across from us, there's a hotel being redone right on the corner. From a street that was known for shoes, it's become something else. I also love having the NYU population nearby. It's fun. We work really hard at what we do, but we also really enjoy it. These, more than anything, are a labor of love.

The manager here actually opened the Burger Joint in the hotel and now has come back to do this. She's going to oversee the domestic Burger Joints.

Where else would you like to expand domestically?
To start with, maybe DC, Cambridge — places I know.

Do you have timetables for any of those?
No. We're self-funded and we are more reactionary than we are strategic about things like this. If someone comes up to us with a whacky idea that we like, maybe we'll go for it. We don't have a five-year plan or even a two-year plan. This could be the second and only one we ever open, or the second of 20.

Are you nervous or scared about anything in particular, now that this all kicking off?
Yeah, I'm nervous we'll be empty and no one will come eat here. It is three times the size. That keeps me up at night. The ironic thing is that when we opened the one in the hotel, we were confident but everyone thought we were crazy. Now, everyone is saying this is going to be a hit, and I couldn't be more nervous. Until I see people coming in here and eating burgers, I won't be happy.