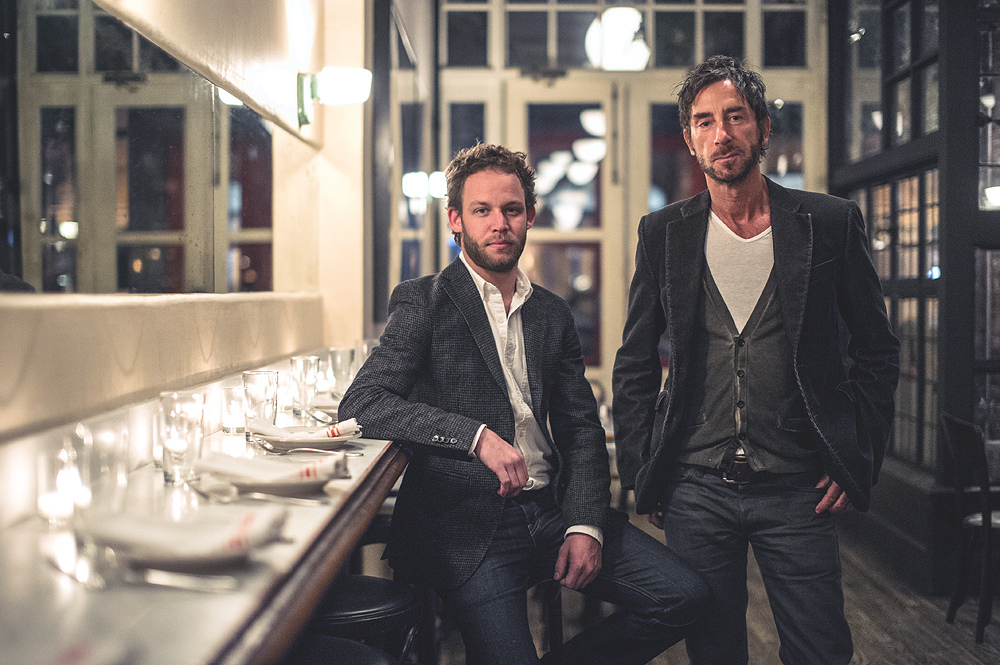 [Jon Neidich and Jean-Marc Houmard by Daniel Krieger]
Acme was one of the biggest dining surprises of 2012. Indochine's Jean-Marc Houmard, nightlife man Jon Neidich, and a few of their friends and business partners took over a Great Jones Street space that formerly housed a no-frills Cajun restaurant. They kept the name, but transformed the space into a bustling brasserie with a menu by Mads Refslund, one of the founding chefs of Noma in Copenhagen. After a quiet launch last January, the bloggers immediately took notice of Refslund's creative, but accessible Nordic-influenced cuisine. Strong reviews from Adam Platt and Pete Wells introduced Acme to a much bigger audience. These days, Acme is still a very busy restaurant. Eater recently sat down to chat with Houmard and Neidich about year one of their runaway hit.

Before you met the chef and before the space became available, did you want to do a restaurant with a Nordic influence?
Jean-Marc Houmard, owner: No, the concept came completely from meeting the chef. We just changed what we had in mind because that was such a great opportunity.
Jon Neidich, owner: I don't think the idea of New Nordic cuisine was very present in the New York food scene, or even the national scene. It was interesting that about two months after we decided to work with Mads, the New York Times came out with an article that was talking about this New Nordic craze.
Jean-Marc: Just completely...luck and fate.

Did you worry that it wouldn't work out?
Jon: Well, I think we knew that we were doing something different, and I think that any time you do something different you have the fear that people won't like it. Jean-Marc really saw the potential to do something special and be a restaurant that had that fun and vibrant scene, but also provided really high quality food that wasn't just your typical bistro fare. So, he really gets the credit for that.
Jean-Marc: I mean, originally we wanted to do something really, really simple and like not "foodie" at all — really just a fun place to hang out — and we had to change our perspective. It quickly became more involved and more serious and more nervous. It was completely changing what we had in mind, but I'm glad we did that.

Did you design the space with the style of cuisine in mind?
Jean-Marc: No, it was just a place that didn't seem overly designed, and seemed kind of timeless. I mean, we completely gut-renovated the place, but it doesn't feel that we did. That was kind of the idea — it could have been like this when we took over.
Jon: I think one of the other inspirations that we kind of kicked around was almost the concept that we inherited a bistro, and we decided to sort of put our own touch on it, spruce it up. And then eventually the story ended up working with the idea that we inherited a bistro and installed the new, current food concept into it.

How was the opening?
Jean-Marc: We had a pretty slow week.
Jon: Yeah, I think we did like 70 covers our first day. It was a Wednesday, I think.

It certainly felt like a secret. Were you planning to keep it a secret?
Jean-Marc: Not necessarily a secret, but we didn't want to be overwhelmed. We kind of needed to have enough time to, you know, get our groove. It takes a long time for a restaurant to work out the kinks, so we thought it would be better to just keep it, you know, as much under-the-radar as we could.
Jon: Yeah, I think we wanted it to be more of a slow burn. We wanted to work our way into it, so that we were ready when the crowds started showing up, and they did.

When did you notice the foodie crowd coming to the restaurant?
Jean-Marc: Yeah, I think that pretty much right away the bloggers picked up what we were trying to do.
Jon: It was really interesting, actually. It was a great feeling to have people come in that were really excited about the food, and we knew that we were doing something different. I think that even from the first month, people were genuinely excited. That was a great thing. 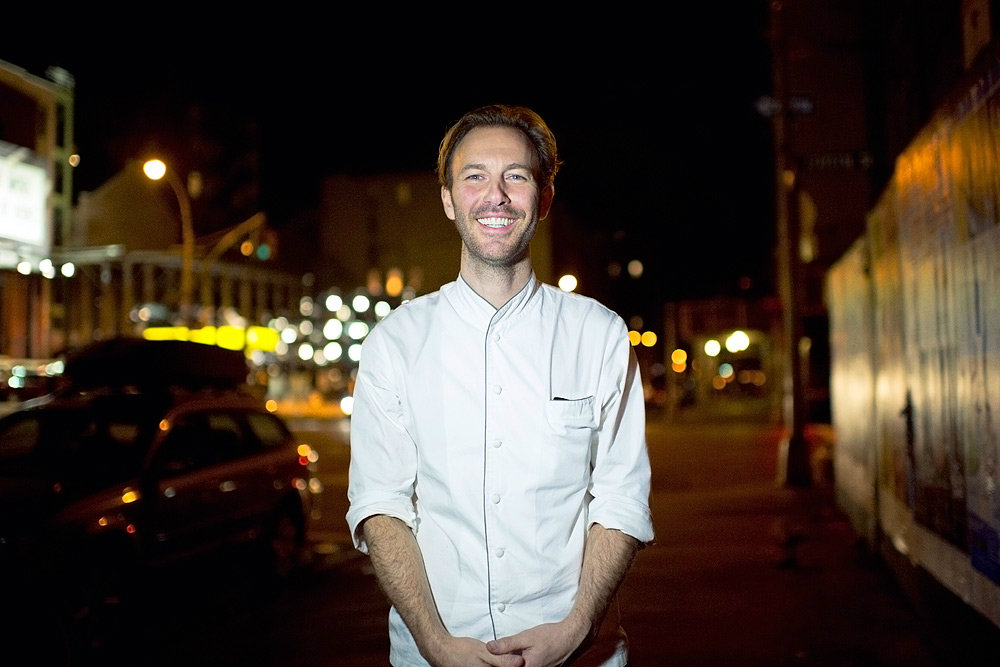 Were there any big ideas that landed on the cutting room floor?
Jean-Marc: I mean, Mads was used to doing very high-end food, so he had to sort of adjust to the concept and the size of the kitchen. So, some of things that he really wanted to do, he had to compromise a little bit, I guess. We didn't want it to be super high-end. So, yeah, some ideas were tweaked with.
Jon: Mads is so talented that, I don't know, he doesn't have big misses. It's maybe just that something needs a different presentation or a different garnish.

What was the review process like?
Jon: Yeah, they were in within like...we were reviewed within like two and a half weeks. I think Adam Platt came in like three-and-a-half weeks in, and the Times was here in four-and-a-half weeks, and I didn't sleep any more than four hours in any period of the night until the Times review came. I think Pete Wells really understood it as much as anyone we've even talked to. It was an amazing, even emotional moment to read his review. He basically just got it straight from our brains and onto the page. It was really incredible.

How has the downstairs space evolved over the last year?
Jean-Marc: We do private dinners for large tables and we can accommodate them in the large dining room, so that's a nice place to do 15-18 people downstairs in the early evening, and then it turns more into a fun, relaxed place. We serve a smaller menu for the whole night, which is also an added bonus, because you can have nice food in a more casual setting downstairs.

What are your goals for year two?
Jon: I think Jean-Marc and I share the same, I guess, affliction or blessing/curse where we're never satisfied. I mean, we come in every week and we'll talk about what we'd like to improve on as opposed to what we're happy with, which can be a kind of masochistic way to live. We just want to stay consistent and keep the service humble.

What do you want to improve on?
Jean-Marc: I mean there are always things that you can do better. It's a never-ending process. There's never a moment where you can sit down and say, "Okay, it's done."

You were looking at another space recently. Are you still thinking of doing another project downtown?
Jean-Marc: We're always sort of keeping our ears open. We don't have any set projects in mind now, but sure. 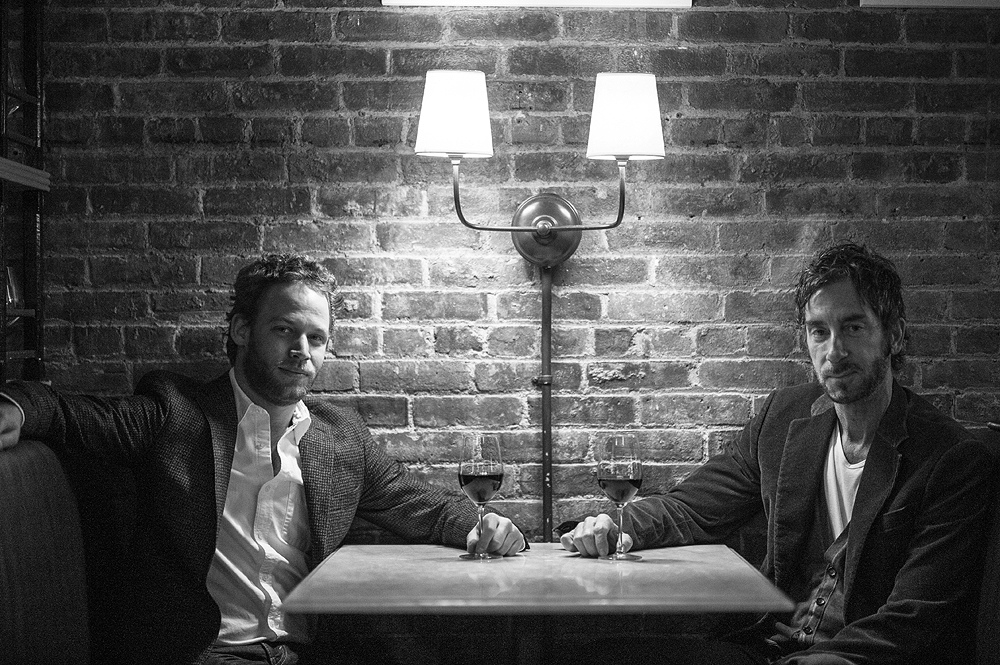 Does it feel like it's been a year?
Jean-Marc: A fast year.
Jon: Some days it feels like we've been open for three years, and some days I feel like we opened two months ago. It's been an amazing year.
Jean-Marc: We're definitely thankful for the way it turned out. You know, you're nervous before you open. It's kind of like a baby that comes out in the world, and it's starting to take on a life of its own. And if you nurture it well enough, it grows into something that goes beyond your expectations and then there is a sense of accomplishment that is rewarding.
· All Coverage of Acme [~ENY~]