Before and After: the New and Improved Perry St.

Share All sharing options for: Before and After: the New and Improved Perry St. 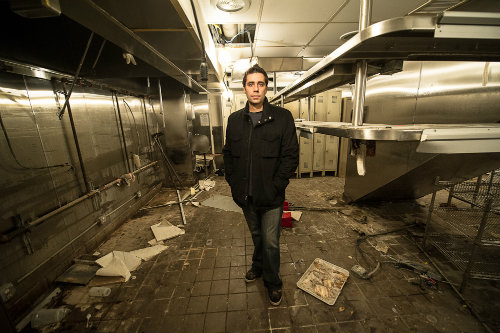 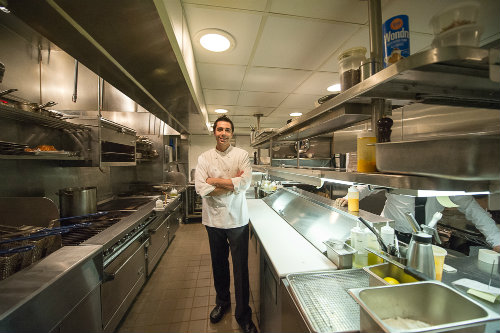 Cedric Vongerichten feels that most people still don't realize how badly Hurricane Sandy hit Perry St.. "It was a war zone in here, and some of our regulars don't even have an idea of what happened," he says. Vongerichten was making the point on a recent Saturday evening, seated in the restaurant's bar area. With diners beginning to trickle in for dinner service, waiters patrolling the room, and soft-lounge covers of Hall & Oates playing over the PA, it was an altogether different scene than the one he toured me around several months ago. Back in November, the dining room was dark, dusty, and empty, and the kitchen below it was being gutted for a massive — and expensive — renovation. The work is now done. Perry St. is back in business.

As certain restaurateurs affected by Sandy have noted, the hurricane's damage ironically allowed some people to improve their operations. Vongerichten points to several new features of the dining room and the kitchen. Downstairs, there's a new plancha, which replaces the flattop grill the staff had used since Jean-Georges Vongerichten, Cedric's father, opened Perry St. in 2005.There's also a new gas salamander Vongerichten seems almost giddy about. "These new things — the salamander lets us toast bread in like 20 seconds, and the plancha is great for making pancakes for brunch and this new dish of scallops, which we never used to do before," he says. "We are now more efficient." 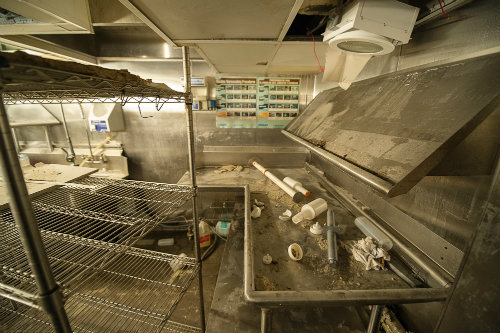 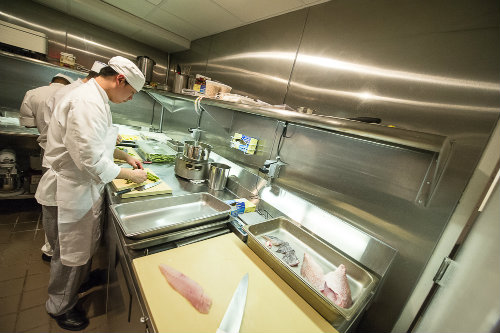 The kitchen, before and after [Photos: Daniel Krieger]

What hasn't changed is the kitchen staff. Despite a few employees who had to leave for reasons unrelated to Sandy, Vongerichten kept his cooks working in other restaurants within his father's empire while Perry St. was being rebuilt. Even the dishwasher has returned for duty.

Upstairs, the dining room remains as muted and modern as ever, boasting just a few updates. There's a new carpet, a fresh coat of paint on the walls, more modern lighting, and what Vongerichten calls an "updated" set of service pieces and tableware. 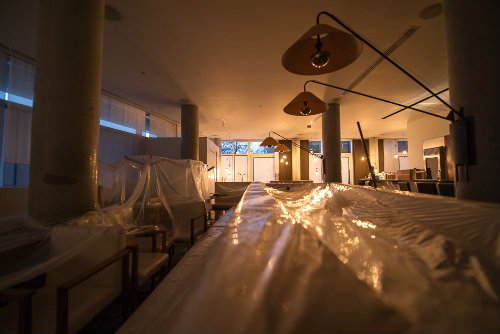 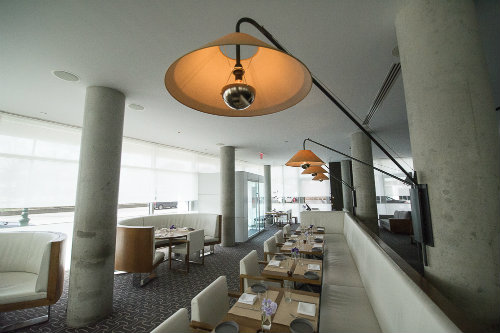 The restaurant's interior, before and after. [Photos: Daniel Krieger]

The rebuilding process has not been cheap, with some reports noting that it took around half a million dollars to get the place back up and running. "It looks like insurance will be taking care of some of that," says Vongerichten, "though I don't think it will be the full amount." Vongerichten says he and his father were hell-bent on restoring Perry St. as quickly as possible, no matter the costs or challenges involved. "It's a small restaurant, and we do things here that you might call 'homemade,'" he says. "This, in many ways, is Jean-Georges's boutique."

The process seemed insurmountable at first but ended up coming together more quickly than anticipated. "You know, it's tough being part of this machine and stopping all of a sudden," Vongerichten explains. "But it's just beginning to look like that big thing is starting to move again, and I finally feel normal."

Now, a look at the new Perry St., in all its glory: