I had a moment of déjà vu as I walked down the few steps into the restaurant tucked into 4 Charles St. Quiet Village street; basement space; tiny room; low ceilings; small bar to the left. Was I in Fedora? The real Fedora, I mean, not the impostor currently sailing under that name on West 4th Street.

Of course, I wasn't. Fedora's gone the way of Gino and other fine New York institutions who have discovered the hard way that the brutal economics of 21st-century New York have no place for them. But El Charro Español is that kind of place. It's what pops into your mind when you picture the typical, side-street Greenwich Village eatery of old: cozy, slightly hidden, tradition-bound, attentive to its regulars, and offering the diner not a raucous jolt of energy but a relaxing respite from the world.

El Charro's exact age is hard to determine, but it's probably been here for about 60 years, gathering minimal press attention, but a faithful clientele that it made almost entirely of locals. This is a neighborhood joint. It began as a Mexican restaurant, a culinary rarity in those post-WWII days. It was run by Maria Garcia. (Her daughter married Carlos Jacott, who went on to found El Parador on East 34th Street, which still stands and is today the city's oldest Mexican restaurant.) El Charro remained a Mexican place at least into the '80s, but today, under its current owners, it is a Spanish restaurant, and a good one. 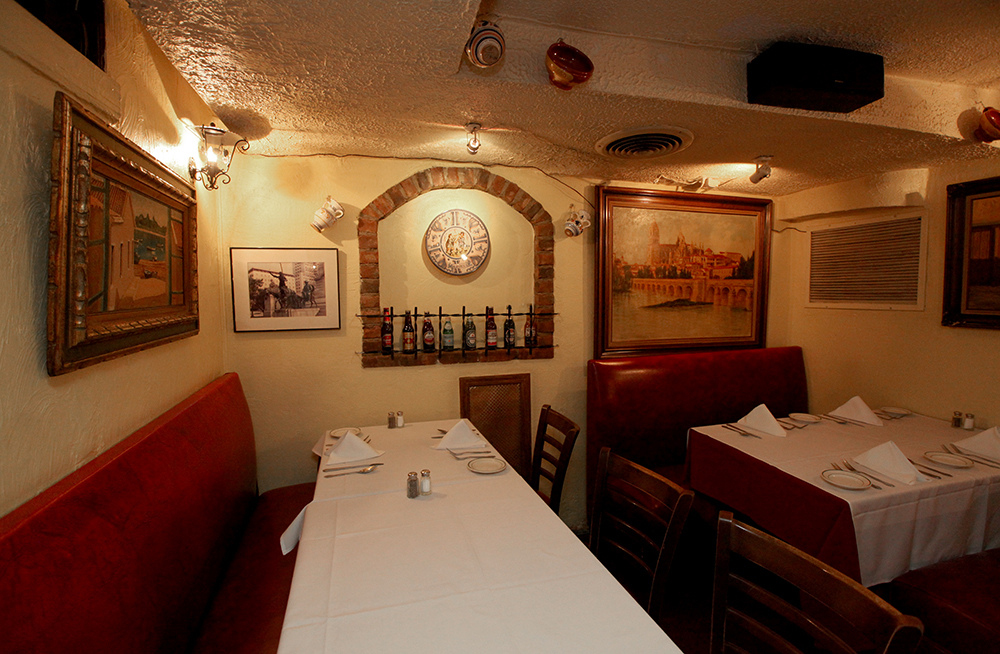 I ordered a sangria when I saw that the bartender was mixing them separately, constructing each in the glass, rather than pouring the potion out of a pitcher. The Shrimp Ajillo, sauteed in olive oil, garlic and hot pepper, was beautifully done: simple, tender and subtly spicy. For my entree (which came with one of those comforting—but not necessarily good — side salads slathered in French dressing) I had Pollo Villaroy, two breasts of chicken coated with bechamel sauce and bread crumbs and deep fried. It was tasty, but perhaps too filling. Though I liked it, I could have done with a half order.

The restaurant seems to have been recently spruced up; the exterior is in picturesque, pristine condition and the signage is small and classy. But the room's age is betrayed in the details: the old cash register; the old-fashioned punch clock for employees; and the thin, narrow staircase to the tiny bathroom. (Please take note of the oil painting of a sad clown as you pass.)

The ratio of staff to patron was about one to two the night I was there. So it's no surprise that service was attentive. Or maybe I should not take that for granted. I've been in plenty of contemporary restaurants stuffed with waiters and still had a hard time getting anyone's attention. Old friends were catching up at one table, a mother and a daughter at a second. Making the most noise were two men having a convivial business meeting, the larger, older one a longtime regular feeling very at home, the younger, thinner one a newcomer who seemed to want to be in a steak house. He ordered a filet mignon ("Can you butterfly that?") and called out for A-1 Sauce. "Are you complaining about this place?" his hefty friend asked in comic disbelief. "Are you COMPLAINING about this place."

I was sympathetic. I mean, seriously, dude, are you complaining about this place?

—Brooks of Sheffield
· All Editions of Who Goes There? [~ENY~]