Pig and Khao's Leah Cohen Gets Sushi, More at Yopparai

Share All sharing options for: Pig and Khao's Leah Cohen Gets Sushi, More at Yopparai 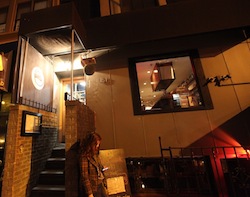 Top Chef alum Leah Cohen, chef and owner of the newly-two starred Pig and Khao, regularly heads to the year-old, semi-hidden, second-floor sake bar Yopparai, right next door to her own Lower East Side restaurant:

"Yoppari is a Japanese restaurant on Rivington between Clinton and Suffolk Street. It's literally right in between where my apartment is and the restaurant is. It's on a different floor and you have to ring a door bell. I usually walk up the flights of stairs. It's really really awesome Japanese food and he gets all of his fish flown in from the Tsukiji market in Tokyo. The New York Times did a little piece on them, but not with a review or anything for some reason. I have no idea why. Nobody knows about it and I just think it's really really good.

"The quality of the ingredients are really fresh. The actual restaurant is really nicely decorated and it's something that you don't think you would find on the Lower East Side, and one of the reasons might be because the prices are actually quite high but not higher than any other high-end sushi restaurant. [But] they don't just do sushi. They have an open kitchen, maybe 25 seats or something like that."
· All Coverage of Leah Cohen [~ENY~]
· All Editions of Dining Confidential [~ENY~]
[Photo]